This is one in a series of essays on important works of Korean cinema available free to watch on the Korean Film Archive’s Youtube channel. Previous selections include The Insect Woman, The Shower, The Road to the Race Track, Yeong-ja’s Heydays, Deep Blue Night, Aimless Bullet, Iodo, 301, 302, The March of Fools, Seopyeonje, Wangsimni, My Hometown, Madame Freedom, Chil-su and Man-su, and Night Journey. You can watch Under the Sky of Seoul here.

More literally translated, the original Korean title of Under the Sky of Seoul (서울의 지붕밑) would be “Under the Roof of Seoul.” Whatever it lacks in mellifluousness, that version hardly seems inapt during the film’s opening sequence, which offers a series of views of the South Korean capital as it looked in the early 1960s. A near-total absence of high-rise buildings makes the first of them almost unrecognizable to those who’ve only known the city in the 21st century. But subsequent shots focus on more familiar sites: Tapgol Park with its Buddhist pagoda, the United States Embassy designed by Kim Swoo-geun (an architect to whose work I’ve paid more than a little attention here on the Korea Blog). What most catches the eye, however, are the roofs, and specifically those with the curved tiles and lines of the traditional hanok courtyard house.

There were more hanok in Seoul 60 years ago than there are now. As Under the Sky of Seoul depicts it there were many more indeed, but the film needs them for their symbolic value as built representations of the old order. For almost every episode of this highly episodic narrative deals with one theme above all: the coming of industrial modernity and the socioeconomic changes brought with it. To do so requires not just un-modern homes but un-modern men: hence protagonist Kim Hak-kyu, a traditional doctor who has prescribed herbs and performed acupuncture (scoffing at the very idea of disinfectant) in the same hanok for 30 years. In only a few scenes does he actually practice medicine; the rest of his time he seems to pass eating, drinking, and playing baduk with his similarly middle-aged buddies, one a destitute real-estate agent and the other a fortune-telling reader of physiognomy.

The blustery, out-of-touch patriarch is a standard figure of fun in Korean film and television today, but even in 1961 he was getting his supposed comeuppance onscreen. Despite his own struggles, or indeed due to them, such a character must be fiercely defensive of his family’s social position. So it is with Hak-kyu: early in the movie he examines the daughter of a local tavern owner attempting to conceal an obvious pregnancy, only to find out later that — much to his chagrin — his son is the father. He’s already been keeping a wary eye on his own daughter, a war widow fancied by the young doctor who recently opened up a practice across the street from her hair salon. Outfitted in Western suits and possessed of advanced medical equipment, this suitor is, irritatingly, not just a Johnny-come-lately to the neighborhood but a personification of the new, modern Korea. 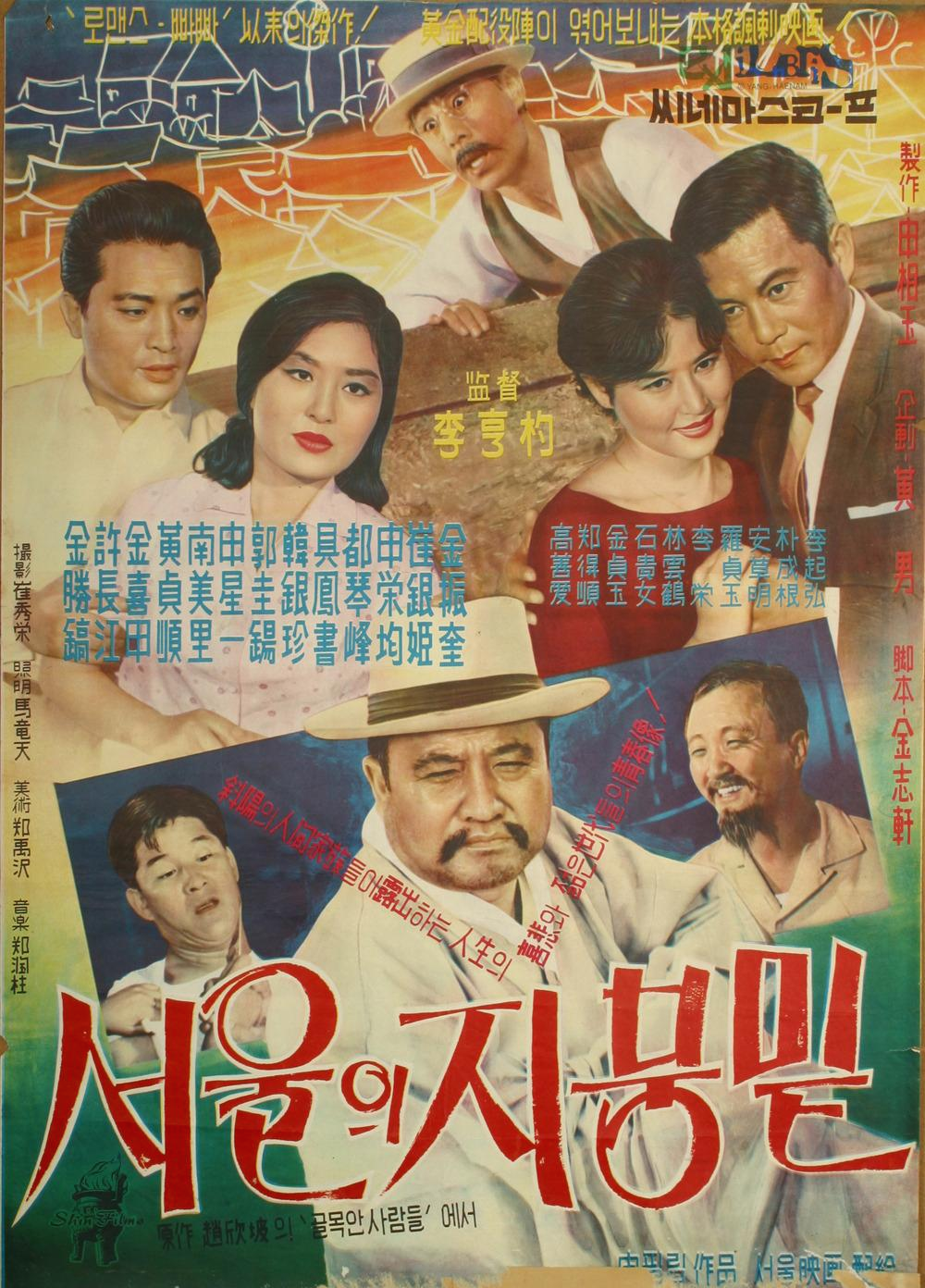 When the young doctor runs for City Council, Hak-kyu naturally decides to throw his hat into the ring as well. His hat, incidentally, is one of his few visibly Western elements of his appearance, his usual attire being plain white, generously cut traditional hanbok. But no sooner does he start campaigning (an effort that, then as now, involves broadcasting vague promises out onto the streets from high-powered speakers mounted on a slow-moving truck) than he puts on a vest, tie, and jacket. Whatever the change of dress does for his image, it isn’t enough: when his bid fails, only his rival’s generosity saves him from the financial ruin, and soon thereafter that same rival’s medical acumen saves his life. The film closes on Hak-kyu cradling his new grandson, the picture of grandparental satisfaction, yet his humiliation throughout the course of the preceding two hours could scarcely have been more complete.

Such an all-is-well-again ending belongs less to the feature film than the sitcom, a form of which Under the Sky of Seoul feels like a prototype. One-off dramatic productions had begun airing on Korean television not long after broadcasting began in 1956, but it wasn’t until 1961 that regular scripted series — the forerunners of today’s internationally popular “K-dramas” — began to take shape. They entered a field of episodic entertainment occupied by radio dramas and serialized fiction, both of which seem to have influenced this movie. Its sound design is impressive by the standards of the time: the performers speak their own lines rather than having been dubbed over by different voice actors, and touches like a recurring record of “Besame Mucho” give the setting sonic character. But many of its music cues, brimming with organ and accordion, could have come from the broadest radio comedies of prewar America.

Like most Korean films of its era, Under the Sky of Seoul was adapted from a novel. Its author Jo Heun-pa belonged to a generation of writers who found their readerships in newspapers, and so meted out their stories in short chapters that could entertain either standing alone or in sequence. This, we could say, is why the film feels today like a binge-watch of four or five episodes of a light comedy series about the people of one particular neighborhood (Ihwa-dong, according to the dialogue, just northeast of central Seoul). Before the one where Hak-kyu runs for City Council, there’s the one where his physiognomist pal takes three separate bribes to fix the same couple’s marriage-prospect forecast and fakes his own death to get out of it, not to mention the one where a young lady fleeing the police hides in Hak-kyu’s room, bringing down his wife’s jealous wrath.

Hijinks ensue, as they say, and also distinguish what first-time director Lee Hyeong-pyo was doing here from what, say, Ozu Yasujirō was doing over in Japan at the same time, the twilight of his own career. Both filmmakers worked with the same basic material: the dissolution of traditional family structures in an impoverished Asian country facing both reconstruction after a devastating war and an influx of Western products both technological and cultural. But while Ozu’s pictures tend to exude sympathy and even sorrow for the parents and grandparents engulfed by a reality unlike any they or their ancestors had known, Under the Sky of Seoul straightforwardly ribs the Hak-kyus of the world and their feckless friends for their unwillingness to get with the program. Lee had previously worked for the United States Information Agency, something of whose propagandistic view of American-style nation-building might have rubbed off on him.

On the whole, the political interregnum of the early 1960s constituted a relatively free time to be a filmmaker in Korea, certainly in comparison to the sixteen-year presidential term of Park Chung-hee that followed. More aggressively developmentalist than any regime the Republic of Korea had known before — or indeed, has known since — Park’s administration cracked down on most forms of popular culture unlikely to instill the properly nationalistic attitudes. (In his speeches, he now and again made frustrated reference to Koreans’ invincible tendency to put the family before the state.) Only before Park took power could a film like Yu Hyun-Mok’s Aimless Bullet dare to depict Korean society as too demoralized even to collapse. Shot the next year, Under the Sky of Seoul tells its story amid a less dire milieu, if one clearly kept out of destitution by little more than its social interconnections.

The mot juste here, at least according to the abundance of wistful comments below the film on YouTube, is jeong. Alongside the history-inflicted bitterness and resentment of han or the penchant for collective expression of joy known as heung, it stands as one of the putatively untranslatable concepts that characterize Korean life. Jeong, as I interpret it, has to do with uniquely strong bonds that develop between Koreans who find themselves “in it together” in one sense or another. “Jeong may have meant something at some point in the past, but that today, it’s a referent to something that simply doesn’t exist in general within Korean society,” argues Canadian blogger Gord Sellar. “Even if such a thing did exist in the village life of Korea centuries ago, it seems largely dead and gone.” Those Korean YouTube commenters expressing their longing for those jeong-filled days of 1961 might well agree.

These feelings could have been inspired by Under the Sky of Seoul‘s unusual vividness. An audiovisually crisp restoration by the Korean Film Archive allows a richer appreciation of the performances given by a cast that includes many Korean film stars of the day, but even more so the incidental details of everyday life captured in between the shenanigans. One character mentions a monthly wage of 50,000 won, the cost today of a good bottle of wine; another character hails a taxi, apparently an ex-military jeep, with the English-by-way-of-Japanese expression sutoppo. Few pictures of the 1960s offer such a clear view of Seoul’s built environment, on the brink of the city’s transformation into a world capital. However modest, it back then seems to have afforded even a family on the decline their own hanok, a miniature walled compound within an urban village — and good walls, they say, make good neighbors.

Let’s Get Out of Here: The Bitter Korean Neorealism of Yu Hyun-Mok’s Aimless Bullet (1961) 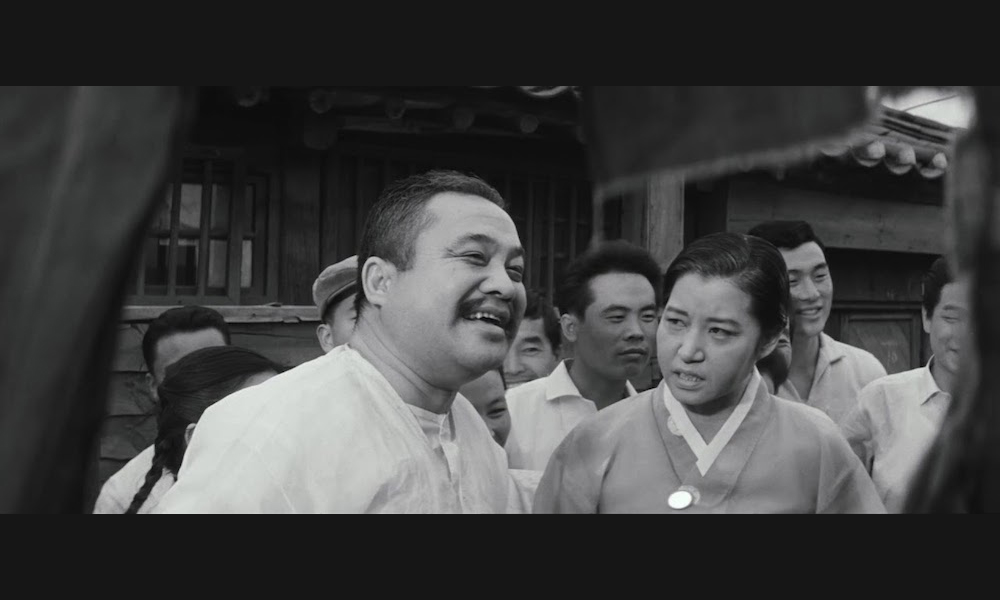