This is one in a series of essays on important works of Korean cinema available free to watch on the Korean Film Archive’s Youtube channel. Previous selections include The Road to the Race Track, Yeong-ja’s Heydays, Deep Blue Night, Aimless Bullet, Iodo, 301, 302, The March of Fools, Seopyeonje, Wangsimni, My Hometown, Madame Freedom, Chil-su and Man-su, and Night Journey. You can watch The Shower here.

Given the increasingly frequent attempts of late to overhaul the American Young Adult canon, I’m not sure how many kids read Bridge to Terabithia these days. But when I was a grade-schooler in the early 1990s, Katherine Paterson’s 1977 novel of a country boy and city girl who imagine their own fantasy kingdom apart from the adult world was still quite popular. Everyone seemed to have read it, for the very reason that everyone else seemed to have read it; not wanting to references to go over our head was one factor, though so was its appearance on school-issued summer reading lists, if not actual class syllabi. But the book does still figure, so I’ve read, into English curricula in lands from Ireland and Australia to Singapore and the Philippines — though it’s less well-known here in South Korea, at least compared to a Western novel like Demian.

One possible explanation is that this country already had its own Bridge to Terabithia, and one readable in a much shorter span of time: “The Shower” (소나기) by Hwang Sun-won. “No Korean short story is as beloved as this one, published while the Korean war was still in progress,” writes translator Brother Anthony of Taizé in a foreword to his own English rendition. “In part, the popularity comes from its great simplicity of language and content. It is a tale that school children can easily understand, and be touched by.” Its themes “include nostalgia for a lost innocence, the fragility of human life, the contrast between ancient rural ways and the difficulties of modern city life, and the simplicity of true joy.” Hwang expresses all of these through the brief encounter between a boy native to the countryside and a girl newly arrived from Seoul.

It would hardly be an exaggeration to say that everyone in Korea has read “The Shower.” Familiarity with the story runs deeper here than that with any piece of literature in the United States, Bridge to Terabithia included. But seeing as these works have been acclaimed long enough for the statute of limitations on “spoilers” to have expired, it will do no harm to either to say that, late in both stories, the girl dies. In Peterson’s novel, if memory serves, she drowns attempting to cross a stream on the way to her and the boy’s woodland hiding place; in Hwang’s story, she contracts an unspecified illness after getting caught in the titular rainstorm. The boy, in both cases, is left with a sense of responsibility for the girl’s death, a burden partially alleviated by the exhilaration of having drawn a step closer to the expanse of maturity.

It is, at least, in Go Yeong-nam’s 1978 cinematic adaptation of “The Shower,” whose expansions of Hwang’s spare tale include a final shot in which the boy, the morning after hearing of the girl’s death, suddenly lets out a joyous-sounding scream and tears off, arms wheeling, into the hills. It also gives him and the girl names, Seok-i and Yeon-i, and multiplies their frolics in the arcadian fields and forests of the Korean countryside before the fateful sunshower comes along. This is in keeping with the sensibility of the original story, though where Hwang’s narration never strays from the boy’s perspective, Go’s film adds scenes focused on Yeon-i, most of them emphasizing the obstacles she faces integrating into her new surroundings: the girls at school who instinctively accuse her of stuck-up cityfication, the boys by the river who head home when she overenthusiastically attempts to join them catching tadpoles. 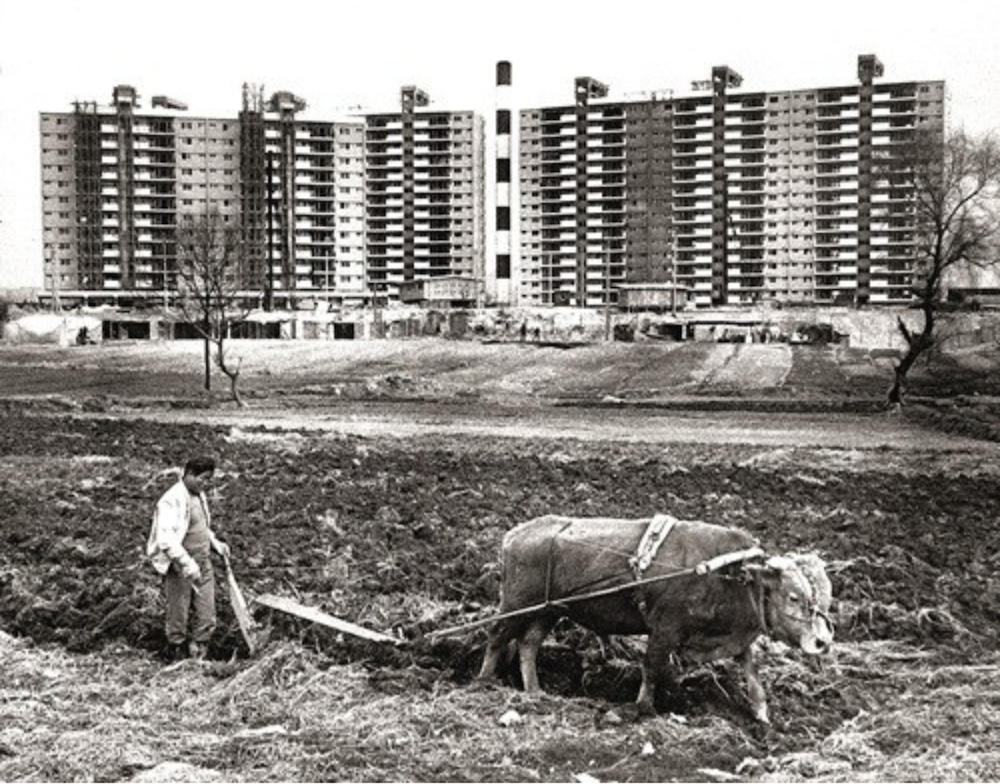 Yet most of the time Yeon-i keeps a smile on her face, one first seen as she rides the train into the village alongside her bespectacled, black-suited, smoking father. But from the station to the father’s family home they take an ox-drawn cart, a juxtaposition of modernizing Korea and agrarian Korea that brings to mind the photography of Jeon Min-jo, specifically his famous shot of a farmer and his beast of burden plowing a field in the foreground while the high-rise apartment complexes of Gangnam rise immediately behind him — a picture taken, incidentally, the very same year The Shower was released. Though characters in Korean literature had been making meaningful journeys from Seoul back to their rural hometowns well before Hwang’s day, the country’s period of intensely rapid industrialization and development in the 1960s and 70s turned them, effectively, into journeys back in time.

The Shower was shot in North Chungcheong Province, about 90 miles and, in certain respects, a hundred years out of Seoul. Seok-i’s parents and Yeon-i’s grandparents live in the same courtyard houses and wear the same traditional white clothing as did generation after generation of their ancestors. But while much of Hwang’s timeless story could be set centuries before he wrote it, the movie clearly takes place in the late 1970s. Many of the village schoolchildren look not entirely unlike young American students (or young Asian-American students) of those days; Seok-i’s finest outfit, worn for his outings with Yeon-i, consists of a wide-collared polyester shirt and a pair of brown flared trousers. Though lush by the Korean film industry’s standards at the time, the production, too, bears the marks of its era, including dialogue entirely dubbed in a recording studio (and in Yeon-i’s case, dubbed by an oddly mature-sounding voice).

But as in other Korean pictures of the 1970s like Kim Soo-yong’s Night Journey and Kim Ki-young’s Iodo (both of which involve Seoulites making psychologically difficult trips to much less developed parts of the country), this faint unnaturalness only enhances the creation of a cinematic dream state. As Seok-i’s feelings toward Yeon-i turn from irritation to affection, the greens, yellows, and purples of the fields around them gain a near-psychedelic richness. An uncommonly wide aspect ratio, as well as a dramatic strings-and-horns score, gives a classical sweep to the development of their relationship, which becomes increasingly playful — and then, when the rain prompts them to seek improvised shelter, intimate. This isn’t to say that these preteens engage in any act that could be called “love,” but then again, I’ve also heard lively arguments about whether or not, between the lines, Hwang implies a consummation of their relationship.

The Shower, the film, gets no more overt than in the dream sequences with which it fills out the story. In one, Seok-i finds his innocently exuberant revelry in nature interrupted by the appearance of a grass-skirted temptress. In another, Yeon-i sees Seok-i seduced by the “fox woman,” straight from a bedtime fable recounted by her grandmother, who entrances him by passing a glass bead from her mouth to his. Yet the most memorable is the last, which has nothing eroticized or bizarre about it. It comes after the ailing Yeon-i makes her way from bed to their usual meeting spot on a bridge to tell Seok-i that her family will soon be moving elsewhere, her father’s business failures having forced them out of not just Seoul but their ancestral home as well. Seok-i falls asleep that night resolving to see her one last time.

Yeon-i then appears in the daytime, wearing brightly colored ceremonial dress and bearing the news that she isn’t going away after all. There, in the course of about five minutes, follow the next two seasons, first the Chuseok harvest festival, complete with dancing, drumming, wrestling, and the townspeople waving torches at dusk. The realism of the fall then gives way, with an accelerated view of waves rolling before the setting sun, to a stark winter scene in which Yeon-i leads Seok-i from the seaside into the snow-covered hills. To a soundtrack of ghostly flutes, the light itself takes on the hues of those purple and yellow flowers. Seok-i stops and calls to Yeon-i, soundlessly; she keeps running, slowly but unreachably. The Shower has been accused of sexualizing its young characters, but its real power, evident in this premonition of loss, is its aestheticization — and of a suitably haunting kind.

No Sex Please, This Is Korea: Jang Sun-woo’s The Road to the Race Track

The First Comprehensive Introduction to “K-Lit” Past and Present: Youngmin Kwon and Bruce Fulton’s What Is Korean Literature? 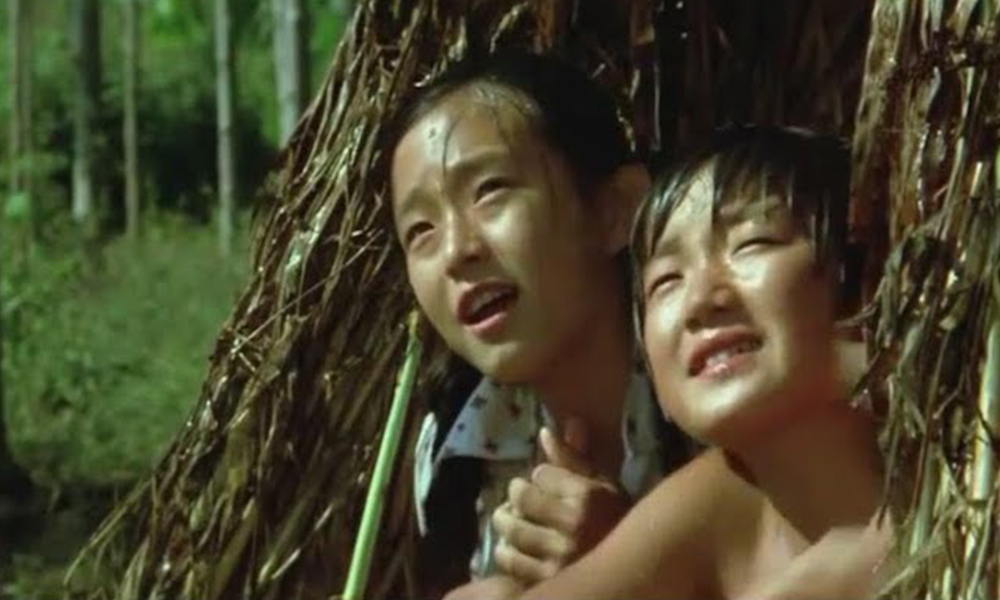