This is one in a series of essays on important pieces of Korean cinema freely available on the Korean Film Archive’s Youtube channel, most recently The March of Fools, Seopyeonje, Wangshimni, My Hometown, Madame Freedom, Chil-su and Man-su, and Night Journey. You can watch this month’s movie here.

Different foreigners who move to Korea struggle with different aspects of life here, but it’s safe to say that none warm up immediately to the ways of Korean food-waste disposal. The country’s ban on food waste of any kind from its landfills necessitates that it be disposed of, and thus stored, separately from the rest of the trash. Instead of under-the-sink garbage disposals, a rarity here whose unauthorized installation can bring about enormous fines, most households have cans just for food waste, which over the course of a few days can become an awful visual and olfactory spectacle indeed. If that sounds bad,  imagine taking out your food trash and having a glance inside the container around the back of the apartment building where everyone else has been throwing theirs out for the past few days, especially in the heat of the summertime.

The most disgusting scene of Park Chul-soo’s 301, 302 (삼공일 삼공이) — and perhaps the most disgusting scene in all of Korean cinema, even given its reputation in some quarters for “extremity” — evokes the same feelings as does the sight of a long-filled food-trash bin but even more so, though the film came out a full decade before the passage of the law that put the current disposal system into effect. It comes about halfway into a battle of wills between two thirtysomething women, neighbors across a hallway. The newly divorced Yun-hee, having grown fat from all the elaborate meals she cooked for her ex-husband, moves into unit 302 of the New Hope Bio Apartments with ambitions of slimming down and starting life afresh. She can think of no better way to introduce herself to Song-hee in unit 301 than by delivering her a plate of food, which Song-hee promptly tosses into the garbage after taking a moment to vomit at the very sight of. 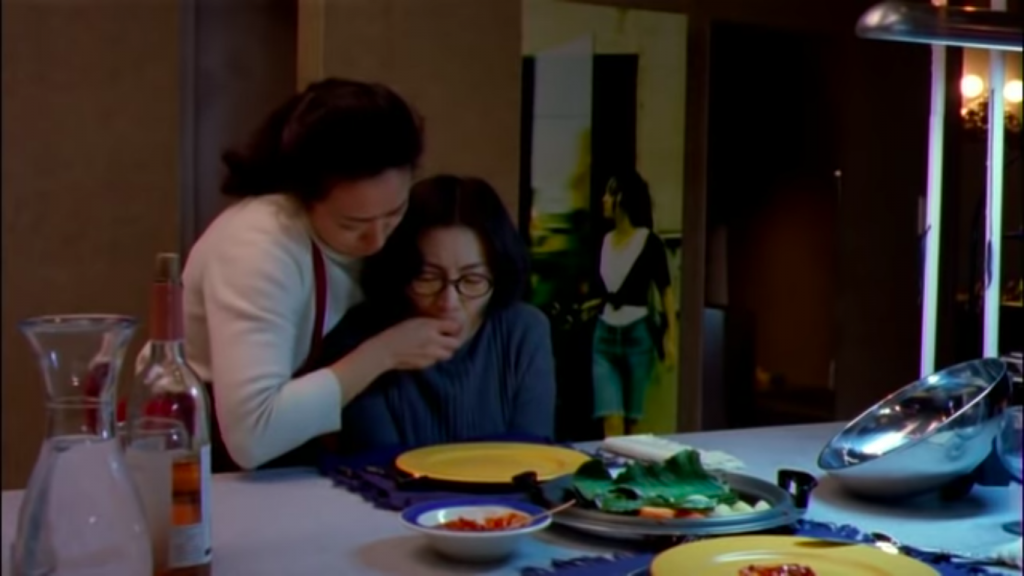 With these two main characters Park sets up a damaged Apollo-and-Dionysius dichotomy. Song-hee refuses not just Yun-hee’s food, but any food at all: her refrigerator contains nothing but bottles of water and soju. And though she seems to pay the bills by writing sex-advice columns while trying to break through as a proper novelist, she can’t even handle hearing the idea of sex brought up. And Yun-hee doesn’t fail to bring it up, going on about how much she enjoys it while brandishing various suggestive foodstuffs. Offended by Song-hee’s asceticism, Yun-hee does everything she can to drag her neighbor back into the realm of the senses, the one into which she means to immerse herself in her newfound independence, cooking and cooking, trying to figure out what, if anything, Song-hee will eat. But the mission is hopeless, as the film’s flashbacks to Song-hee’s childhood — lived under a butcher father who, when not chopping up carcasses, passes the time by raping his daughter — all but guarantee.

Both Yun-hee and Song-hee could be called the victim here, the former having gone unappreciated despite her impeccable mastery of her wifely duties and the latter having been psychologically ruined before maturity, but their unsympathetic behavior — Yun-hee’s aggression and Song-hee’s hostility — makes their characters more interesting than that would suggest. Neither of them exude the total passivity of the standard beaten-down woman of Korean film and literature, though Yun-hee’s forceful attempts to make Song-hee eat (especially in the aforementioned scene that reeks of food trash) do bring to mind The Vegetarian (채식주의자), Han Kang’s 2007 novel about a homemaker who suddenly decides to stop eating meat and thus throws the lives of everyone around her into disarray. The protagonist of Han’s book — if “protagonist” is quite the word — eventually dedicates herself to becoming as inactive as a tree, whereas Song-hee poses to Yun-hee a much more disturbing solution to their standoff.

When Deborah Smith’s English translation of The Vegetarian won the Man Booker International Prize in 2016, it became quite possibly the best-known Korean novel in the West. Much has been made of the stylistic differences between the more ornate prose of Smith’s (Han-approved) translation versus the relatively spare prose of the original and how that might affect the world’s perception of Korean literature as a whole. As one of the first Korean movies to receive a theatrical release in the United States, 301, 302 must have had a similar, if more limited effect on the perception of Korean film. Certain expectations would have been established: expectations for societal critique (especially regarding the lot of women), for stories grounded in reality that nonetheless defy plausibility (can Song-hee really be eating nothing at all?), for sights that provoke intense visceral responses, and for a bold visual style seemingly at odds with often bleak subject matter. 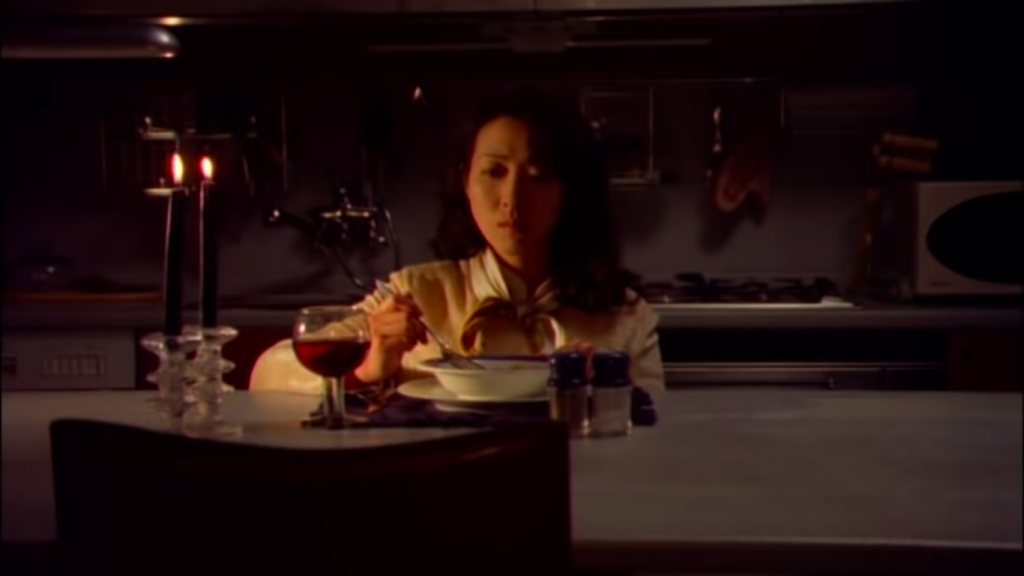 As much as exported Korean films have satisfied those expectations, Park, who died in 2013, was always something of an outsider within his industry. Few Korean filmmakers after him have displayed quite the same frankness he did in dealing with sex, especially when fueled by somewhat unconventional desires, nor with life as actually lived in his homeland. (The image nonchalantly offered toward the end of 301, 302 of dead dogs lined up for sale at an outdoor market will still shock many a Westerner, even more so than the ultimate scene of primal taboo-violation that comes soon afterward.) Even 23 years on, 301, 302, on the surface an indictment of a particular time and particular place in a particular country where traces of savagery still made themselves felt amid a previously unimaginable modernity, still has a vital challenge to issue its viewers, and not just the challenge of keeping their eyes on the screen during some of its more harrowing passages.

What is that challenge? Over the years since I first watched 301, 302, I’ve become convinced that it has something to do with the sensory itself. To speak from personal experience, I find that the more I write, the closer attention I pay to the writing of others; that practice, along with the conversations I have with more experienced writer friends, has made me realize how little I’ve ever written about sense impressions of any kind, faint or intense, pleasurable or disagreeable. That isn’t necessarily a disadvantage — every writer’s style emerges from what’s absent as well as what’s present — but the fact that I could go so long without noticing is telling enough in itself. What my own long if unconscious avoidance of the senses means I’ll have to work out for myself, but Park’s films ask all of their viewers the cost of such a habit, as well as the potentially equal cost of overindulgence in the sensory. But then, so does life in Korea itself, a country that presents no end of vivid sights, sounds, and smells — not all of them food trash. 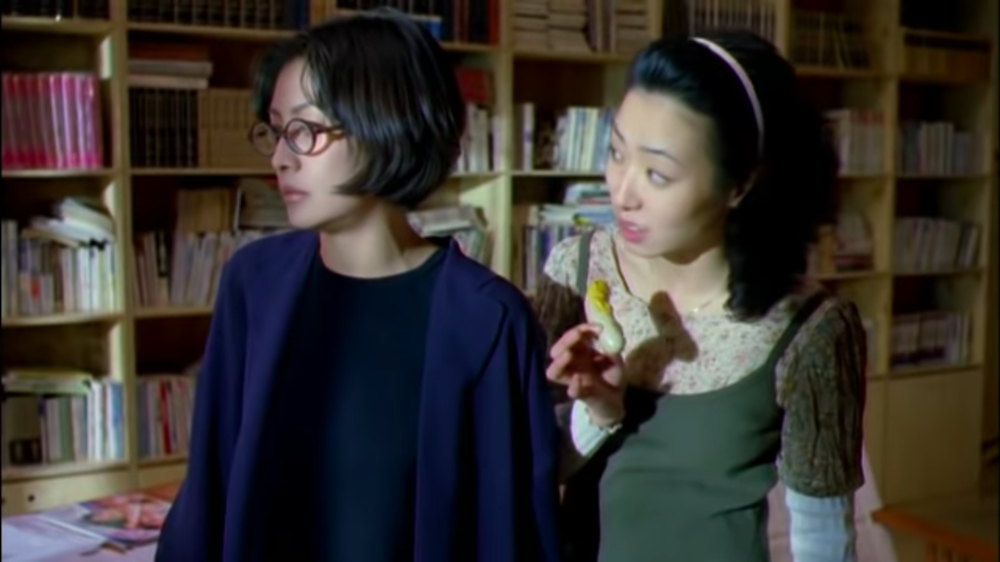