This is one in a series of essays on important works of Korean cinema available free to watch on the Korean Film Archive’s Youtube channel. Previous selections include Iodo, 301, 302, The March of Fools, Seopyeonje, Wangshimni, My Hometown, Madame Freedom, Chil-su and Man-su, and Night Journey. You can watch Aimless Bullet here.

South Korean films, as even casual foreign viewers come to believe, are meant to critique South Korean society. To the extent that this precept holds true, the country’s most acclaimed films bring its society in for the severest treatment: take Lee Chang-dong’s Burning (버닝), to name a recent example, or Bong Joon-ho’s Parasite (기생충), to name a more recent and more widely celebrated one. Looking back to the pictures most often named as the masterpieces of Korean cinema, one finds even harsher indictments, none perhaps harsher — nor more highly praised for its artistry — than Yu Hyun-Mok’s Aimless Bullet (오발탄). Shot in 1960, less than seven years after the armistice agreement that put the Korean War on hold, the film takes such a bitter view of life in the developing South Korea that the country’s government almost suppressed it entirely.

It took an outsider, so the story goes, to clearly perceive the artistic virtues of Aimless Bullet, specifically an American consultant to the Korean National Film Production Center. That consultant persuaded the Korean government to at least allow the movie enough of a release in Seoul that it might qualify for foreign film festivals. Despite being quickly pulled from Korean theaters, it eventually played at the 1963 San Francisco International Film Festival (the sole surviving print used for the Korean Film Archive’s extensive 2015 restoration) and met with praise from the likes of Variety, whose critic praised its “brilliantly detailed camera work” as well as its “probing sympathy and rich characterizations.” The aesthetics and themes would have seemed broadly similar to those of the Italian neorealists, filmmakers whose work was still in vogue in America at the time. Yu credited Bicycle Thieves as an influence on his style, and the like of Vittorio De Sica and his cohort had already prepared Western audiences to find cinematic interest in downtrodden people and war-torn places. By the looks of it, people didn’t come much more downtrodden in the early 1960s than South Koreans. Adapting a novella by Yi Beomseon, Yu find his main characters in a hillside shantytown home to refugees from the north the peninsula displaced by the war. In one of its houses live two brothers: Cheol-ho, a clerk at an accounting firm with two children and a pregnant wife, and Yeong-ho, a wounded former soldier and current hard-drinking wastrel. Their sister Myeong-suk out-earns the both of them by going on “dates” with American soldiers. Traumatized into a kind of living death, their mother never leaves her bed, repeating the same phrase day and night, sometimes muttering and sometimes shouting: “Let’s get out of here!” (This line in particular is supposed to have been a point of contention with the South Korean censors, who thought she meant they should all go back to the north.)

Cheol-ho insists on living in what he considers an honest and self-sacrificing manner, delaying even treatment for his own fast-worsening toothache in order to provide slightly more for his family. The younger and much less self-sacrificing Yeong-ho turns down his one chance to make honest money: offered a part in a film, he storms out of the production company’s office when he learns it will require him to show the scars left by his war injuries, the character being an veteran like himself. The scene depicts him as filled with spite as much as pride, and as the film goes on the emotions get mixed with a deepening cynicism: if his country no longer has any use for him, then what obligation does he have to play by its rules? A chance encounter with a past ladyfriend gets Yeong-ho thinking more positively, but when she disappears — seemingly killed by a jealous stalker —  he takes it upon himself to set he and his family’s fortunes right by robbing a bank. Coming early in the third act, Aimless Bullet‘s bank robbery scene is a tour de force comparable, to put it in the terms of Los Angeles cinema, to the one in Michael Mann’s Heat. Both share the brazenness of taking place in broad daylight, though Yeong-ho’s is the simpler operation by far: rather than a team of carefully selected thieves, he enlists the help of only an unsuspecting driver and the also-unsuspecting woman who’d tried to get him into the film industry. As in Heat, things don’t go quite as planned: the driver takes off as soon as he hears the first gunshot, which forces the hapless Yeong-ho to try to evade the law on foot. The chase takes place not just on the streets of Seoul but below them: at one point Yeong-ho descends into the Cheonggyecheon, now a beloved urban amenity but then a dank cavern beneath the concrete of downtown. There, as he exchanges fire with police, he happens upon one of the most alarming sights imaginable, but under the circumstances barely reacts to it; his only concern is survival.

Unlike Heat, Aimless Bullet achieves all of its effects at an obviously (and necessarily) low cost. Unable even to rent out a bank in which to shoot, Yu and his collaborators nonetheless found a way to convey the the tension of the robbery, as well as hint at its inevitable failure, with little more than footage of a shattering lamp and a boy blowing bubbles. In contrast to the makers of the set-bound melodramas the Korean film industry tended to produce before (and in some sense hasn’t stopped producing today), Aimless Bullet uses the real Seoul, and uses every part it can to maximum effect: not just the slum that wouldn’t look out of place in a Satyajit Ray movie, but the dental clinics Cheol-ho passes by; the dirt-floored dive where Yeong-ho and his army buddies drown their sorrows standing up; the small rooftop apartment where the aspiring actress lives alone with a photograph of herself; the U.S. military base gates outside which Myeong-suk and other girls stand around looking as plausibly Westernized as they can. As portrayed in the film, Seoul also looks at times like a plausible imitation of a richer city, though on the whole it’s still a Third World capital: not in the sense of a place of desperate and unrelieved poverty, but one still pitted with pockets of destruction that look leftover from the war, one where each evening men in jackets in ties walk from the office to the shacks they and their extended families call home. It may lack all the commercial towers that have sprouted over the past six decades — to say nothing of the clusters of high-rise apartment buildings that now, for better or worse, do so much to give the city its visual signature — but it also feels strangely similar to the Seoul of today. And modern South Koreans, though now wealthier beyond what any would have dared imagine in the 1960s, still make complaints that echo those of Aimless Bullet‘s characters: their country’s humiliating weakness toward larger powers, the seeming impossibility of honorable advancement, and the lack of options for young people who have made sacrifices of their own.

Modern-day Yeong-hos and Myeong-suks certainly exist, though without the combat scars or GI patronage. As for Cheol-ho, he ends the film lolling in back of a taxicab, delirious after the multiple tooth extractions to which his final despair has driven him. “I have to be a son, a husband, a father, a brother, and a clerk,” he says through a mouthful of blood, delivering a semi-coherent monologue on the burden that has turned him into the “aimless bullet” of the title. Though hardly an uncommon sentiment in Korea, then or now, it’s never been delivered in a more memorable cinematic context. Hence, in part, the frequency with which this film is described as “the Citizen Kane of Korea.” But just as with Orson Welles’ masterpiece, grasping the full extent of its artistic achievement may be difficult for some modern viewers. To appreciate Citizen Kane, watch most any earlier American movie; to appreciate Aimless Bullet, watch most any earlier Korean movie. None put quite this kind of despondency onscreen before, and none have done it so memorably since. 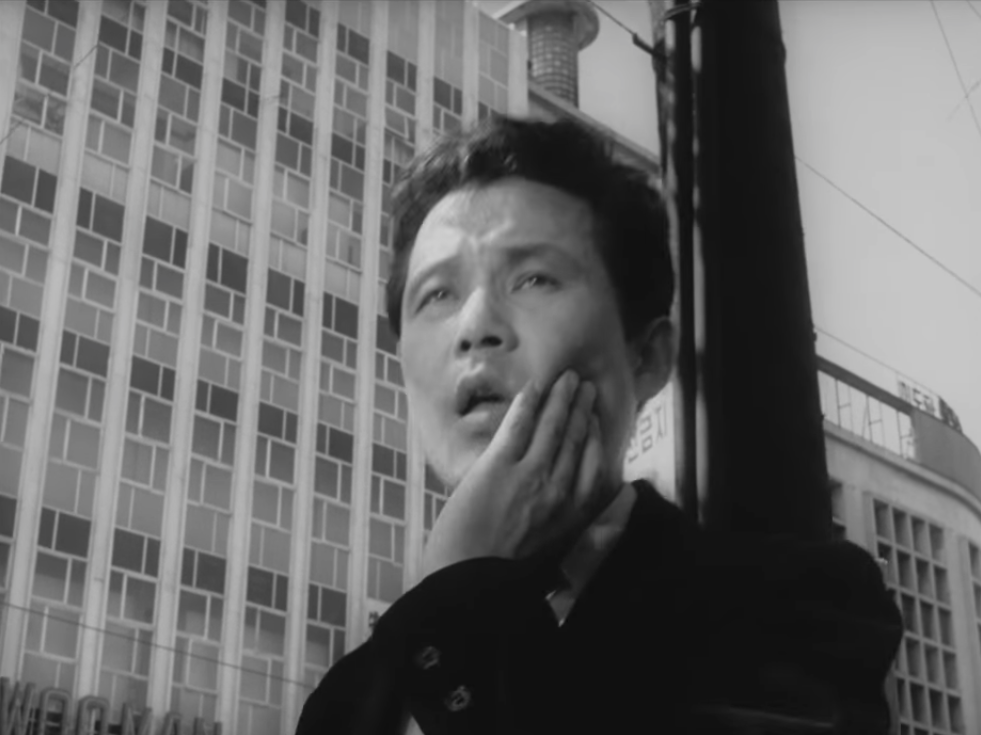