This is one in a series of essays on important pieces of Korean cinema freely available on the Korean Film Archive’s Youtube channel. Previous selections include 301, 302, The March of Fools, Seopyeonje, Wangshimni, My Hometown, Madame Freedom, Chil-su and Man-su, and Night Journey. You can watch Iodo here.

Every Westerner with an interest in Korea remembers when they first realized just how different Korea is from the rest of Asia. The contrast with Japan and China is especially notable, given that many Westerners at first see those countries as culturally indistinguishable from Korea. But it doesn’t take much observation before distinctive elements start to emerge: the popularity of Christianity, to name one highly visible example, at least if all the neon crosses glowing red on Seoul skyline’s are any indication. But despite the surprising influence that particular faith now commands in Korea — mainly in the form of Protestantism, though Korean Catholicism can hardly be ignored — it hasn’t entirely overwritten more deeply rooted belief systems like mugyo, a form of shamanism practiced mainly by women.

That folk religion may date back to prehistory, but its traces still appear in countless forms throughout modern Korean society. “One suspects something wrong happened on the way to modern nationhood in Korea,” wrote Ian Buruma after coming to this country during the 1988 Olympics. “An unfortunate synthesis must have occurred between West and East. The West, usually via Japan in the 1920s and 1930s, gave Korea half-baked German notions of Blood and Soil; it also exported, mostly from America, the equally half-baked notions of vulgar evangelism. Korea contributed an emotional legacy of historical bitterness and a propensity for shamanistic rites.” This mixture, in varying proportions, had also long been appearing in Korean cinema. About a decade before Buruma’s visit, one film used those shamanistic in service of a haunting story that plunges deep into the country’s psychological recesses: Kim Ki-young’s Iodo (이어도).

Kim began his career making pro-American propaganda, then went on to specialize in pieces of psychological horror, usually melodramas filled with themes of sexual obsession. He first made his name in that arena with The Housemaid (하녀), whose lusty young title character makes her way into and gradually destroys a previously untroubled middle-class household. That movie, now widely considered one of Korea’s finest, came out in 1960. That year began an abundant decade in Korean cinema, despite the restrictions the dictatorship of Park Chung-hee would place on the film industry after seizing power in 1961. But then came the 1970s, which many Korean cinephiles, as critic Darcy Paquet puts it, look back on as “the darkest era of Korean cinema. Under Korea’s military regime, harsh censorship and constant governmental interference in the industry essentially destroyed the robust film culture that had grown up in the 1960s.”

The range of permissible genres and styles contracted, and audiences increasingly turned to the still-new medium of television. But although “the quality of the average Korean film fell to its lowest level in this decade,” writes Paquet, “the best films of the 1970s display as much originality and force as those of any era. Despite working on limited budgets, with shoddy equipment and rushed production schedules, Korean filmmakers were able to accomplish something remarkable in the 1970s.” Iodo stands a perhaps the most remarkable of these accomplishments, not least because of the cinematic effects it achieves with its modest resources: in this case, a few boats; the accoutrements of the mudang, the female shamans traditionally engaged to perform rites meant to solve their clients’ personal problems; and Jeju Island, a popular honeymoon destination off Korea’s south coast.

Shows like Travelogue Korea depict Korea’s islands as repositories of traditional culture and places of respite for the harried Seoulite, but Iodo presents a much starker, more menacing vision: the islanders may adhere to the old ways, but they do it with a kind of rigorous desperation, and woe betide the mainlander who comes to interfere. The islands’ demographics have also gone askew, to put it mildly: almost all the men have left for the mainland, and the ones who dare to return meet with grim fates. So it seems to have gone, we learn early in the film, with an island-born-and-raised journalist named Cheon Nam-seok. He has fallen off a ferry on its way to a promotional event for Iodo, a new resort hotel under construction on Jeju. Earlier that day he had loudly denounced the project as blasphemous, named as it is for the submerged rock that, so island legend has it, hoses the souls of fishermen lost at sea.

Not only does Iodo actually exist — though it’s now officially romanized as Ieodo, and still known in some quarters as Socotra Rock, a name taken from the British merchant vessel that came across it in 1900 — it has inspired an entire academic field called “Ieodology.” But the materialism of academia has no place in the island realm envisioned by Kim Ki-young, a maelstrom of primitive, irrational forces understood only by its nearly all-female population. Naturally, the plot sends two men straight into this forbidding setting to investigate Nam-seok’s disappearance: an editor at the newspaper where he worked, and the travel-agency director who organized the cruise (and who still draws suspicions of having through the troublemaking reporter overboard). Through flashback upon flashback they learn about Nam-seok’s long struggle with his island, a place he felt compelled to both leave and return to, one that would never quite let him leave nor ever quite permit him re-entry.

Their journey into Nam-seok’s past brings them face-to-face with a real live mudang, who insists that Nam-seok was claimed by the water demon of Iodo and that only the right shamanistic ritual can bring his body back to the island. By the point in the film at which this ritual plays out, witnessed in disbelief by the two men (and, over their shoulders, a goat), Kim has already established a thoroughly unsettling atmosphere. Some of it arises from the filmmaking’s technical limitations, such as dubbing that makes even characters standing on an empty shoreline sound surreally like they’re in a confined space, but much of it owes to the undercurrent of malevolent sexuality beneath everything that happens on the island. When the mudang’s rites take her into what look like the throes of ecstasy, her satisfaction comes off as satisfaction taken against modernity itself, the force that has robbed the islanders of their very ability to reproduce.

Iodo comes adapted from an eponymous novella, published a few years earlier, by the writer Yi Cheong-jun. Originally a student of German literature, in his own fiction Yi shows an interest in the beliefs that animate the society around him, whether manifest in traditional rituals or systems imported more recently. This has appealed to not just Kim Ki-young, but other high-profile Korean filmmakers as well: more recent cinematic adaptations of Yi’s work include Im Kwon-taek’s Seopyeonje (서편제),  about a traditional musical storyteller who trains his adopted daughter to follow in his footsteps and forcibly instills in her the sorrow needed to master their art form, as well as Lee Chang-dong’s Secret Sunshine (밀양), a film about a small-town murder often taken as an indictment of the Christianity now practiced in Korea. Both of those films have statements to make, or at least questions to pose, about this country. Iodo, however, operates on a more primal level.

Kim’s work has long drawn comparisons with that of his Japanese contemporary Imamura Shohei, and Imamura’s self-description as a filmmaker primarily interested in “the lower half of society and the lower half of the human body” could also apply to Kim. But just as Japanese cinema has found no replacement for Imamura since his death in 2006, Korean cinema has produced no obvious successor to Kim Ki-young since his death in 1998. Given all the associations made in the 21st century between Korean cinema and the “extreme” side of Asian film culture — thanks in part to Park Chan-wook’s Oldboy (올드보이), an adaptation of a Japanese comic book — the casual viewer may be surprised by degree of the modesty and obfuscation in recent Korean pictures — apart from the likes of The Handmaiden (아가씨), another one of Park’s, or the work of a self-marginalizing provocateur like Kim Ki-duk.

But more than 40 years after it opened, Iodo somehow continues to startle, even shock. Some of that reaction it draws with its final sex scene, an explicit one by even modern standards but also a depiction of an act of necrophilia, presided over by the sinister mudang. Kim couldn’t possibly have imagined he would get that past Korea’s censors, and indeed, it only survives today because an unexpurgated print was found in Japan. It was as if he foresaw the resurgence of interest in his work in the 1990s, after it had been all but forgotten amid the formulaic barrenness of the 1980s. The long afterlife of Kim’s filmography has continued: Im Sang-soo remade The Housemaid in 2010, and Iodo underwent a restoration by the Korean Film Council just a few years ago. In fact, it is to the Korean Film Council, and the DVD releases it distributed internationally, that I owe my own first viewing of Iodo, one of the first Korean films I ever watched. Well over a decade and many viewings later, it remains one of the most deeply Korean films I’ve ever seen. 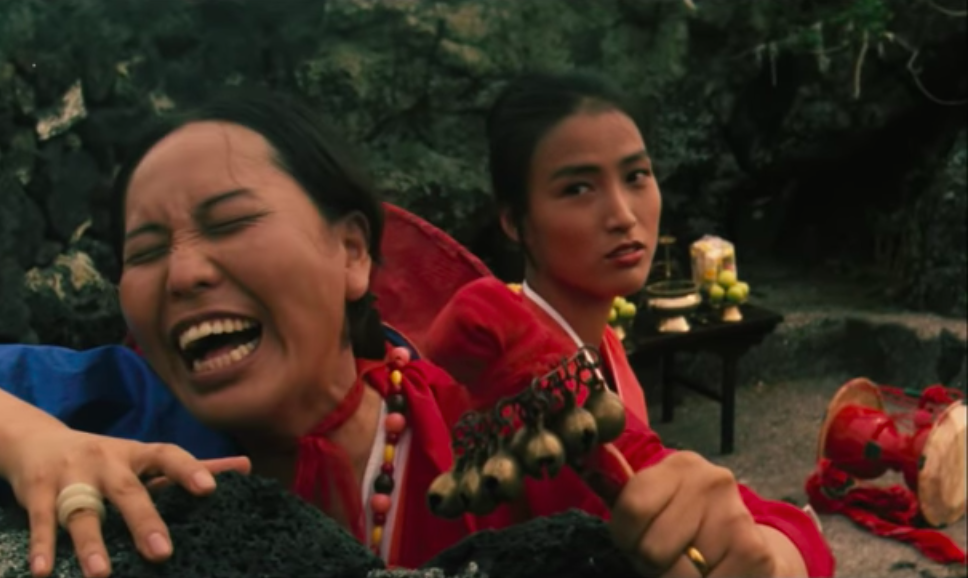