In recent weeks, Seoul looked about to get back to how it used to be. Or at least it looked about to resemble how it used to be, with an impending relaxation of certain restrictions — on the size of gatherings, on the hours of bars and restaurants — implemented at the height of the coronavirus pandemic. Alas, a new “surge” in the number of COVID cases has pushed back even this small step toward normality. Despite having once been the second-most-threatened country in the world by the pandemic, South Korea hasn’t had life disrupted anywhere near as severely as many other countries. The streets of Seoul never really emptied out — at least not before 10:00, by which hour most businesses are now ordered to close. In response, no few Seoulites simply begin their evenings earlier, some of them now managing to get smashed while it’s practically light out.

Still, it’s not quite the same. I feel the difference even in my own neighborhood of Sinchon, especially when I compare it to a video from two years ago. Shot from a first-person perspective, its unbroken 15-minute shot captures a walk along streets that look both familiar (I’ve never spent as much of my adult life in any other neighborhood) and strange. Some of that strangeness comes from the absence of masks and some from the presence of Westerners — not in great numbers, but certainly greater than one sees today. Whatever their origins, nearly everyone who passes through the frame is young. With no fewer than three major universities in the vicinity, Sinchon has long been a youth-oriented part of town. That manifests even amid its now somewhat diminished liveliness, but it did so much more vividly, so I’m reminded, in the summer of 2019. 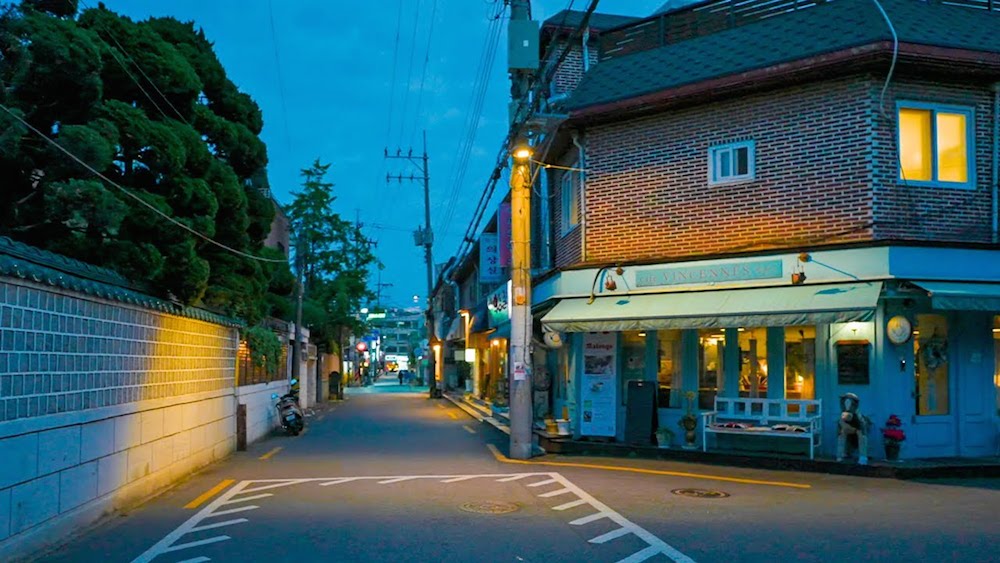 This video’s YouTube channel, Seoul Walker, launched just a few months earlier. Its creator, who calls himself Nathan and seems to be Korean, describes it as “a channel where you can experience as if you’re walking in the cities, including Seoul.” Of course, when it comes to Korean cities, the capital — with its metropolitan area home to half the population of the entire country — is dominant, never just included. The bulk of Seoul Walker’s most-viewed videos depict Seoul, and most of those focus on one part in particular: Gangnam, the only neighborhood someone who doesn’t know the city, or indeed Korea, is guaranteed have heard of. Of course, as those familiar with Seoul understand, Gangnam isn’t actually a neighborhood but rather a variously defined area south of the Han River, one home to new buildings, new cars, and — as virally satirized by PSY — new money.

The scale of the area comes through in Seoul Walker’s most-seen videos. He emerges from Gangnam Station into a typical Friday evening aboveground; he walks along Teheran-ro, whose formidable width makes it almost as inhospitable to such an activity as La Cienaga Boulevard; he visits Apgujeong (still at least a fairly fashionable area, as I understand it) in the snow. He makes his way, in a video that has racked up 1.3 million views so far, through Gangnam in the rain — a frequent weather phenomenon this time of year, and one that enhances Seoul’s cyberpunk aesthetic potential. But as my five years of residence in Sinchon implies, I’m less Gangnam style than Gangbuk (that is, “north of the river”) style. It thus pleases me to find among Seoul Walker’s hits such places in that half of the city as Myeongdong, Bukchon Hanok Village, and the central palace of Gyeongbokgung. 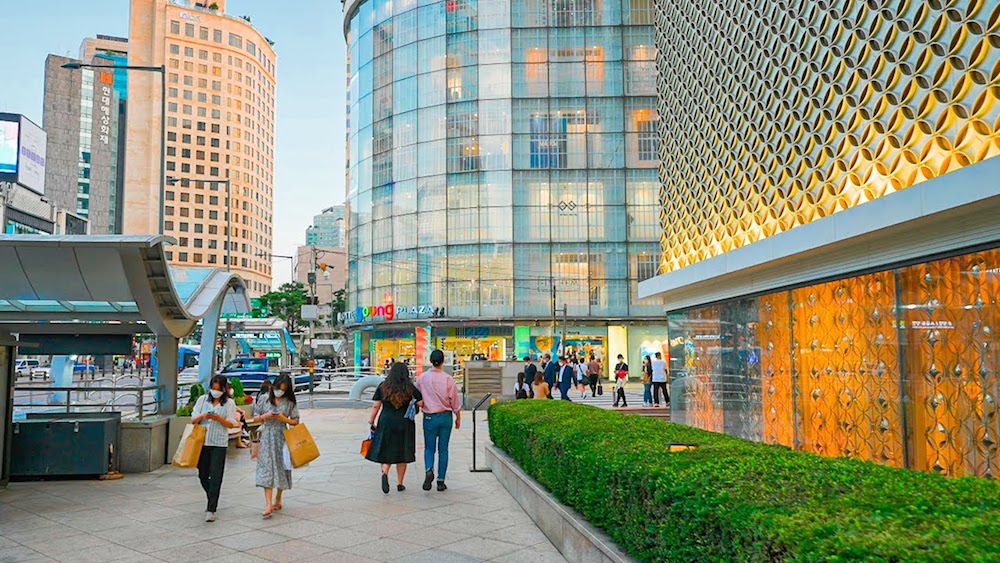 All those are prime tourist destinations, one asset in which Gangbuk is richer than Gangnam (despite the efforts of the “Korean wave”-riding place-promoters studied in Youjeong Oh’s Pop City). Or rather, they were prime tourist destinations. Undeterred by the pandemic, Seoul Walker has continued his production apace, visiting these places even in the era of masks and quasi-curfews that has ground on for about a year and a half now. Nearly all the tourists he catches on camera are Korean: here as in parts of the United States, many locals have rediscovered the pleasures of domestic tourism, the international variety having become impractical. In fact, I myself write these words on the train back from a trip to Incheon, home of not just Korea’s main international airport but a well-known Chinatown and the industrial fun-fair island of Wolmi-do — all of which have starred in Seoul Walker’s videos.

Though not, as far as I can tell, employed by the Korea Tourism Organization, Seoul Walker has surely done more to make foreigners want to visit the country than many officially charged with the task. I first learned about his channel not because of his reputation here in Korea, but because my dad back in the United States got hooked on it after the almighty algorithm sent its videos his way. For a foreign viewer who’s had some experience in Korea’s cities but lately been discouraged from returning by the country’s two-week quarantine requirement, the appeal is clear. But I’ve also found myself enjoying Seoul Walker’s videos, even as I live in the real Seoul. I could step right out the door and take these same walks myself, but his videos remind me of how often I don’t — as well as what I could experience if I did. 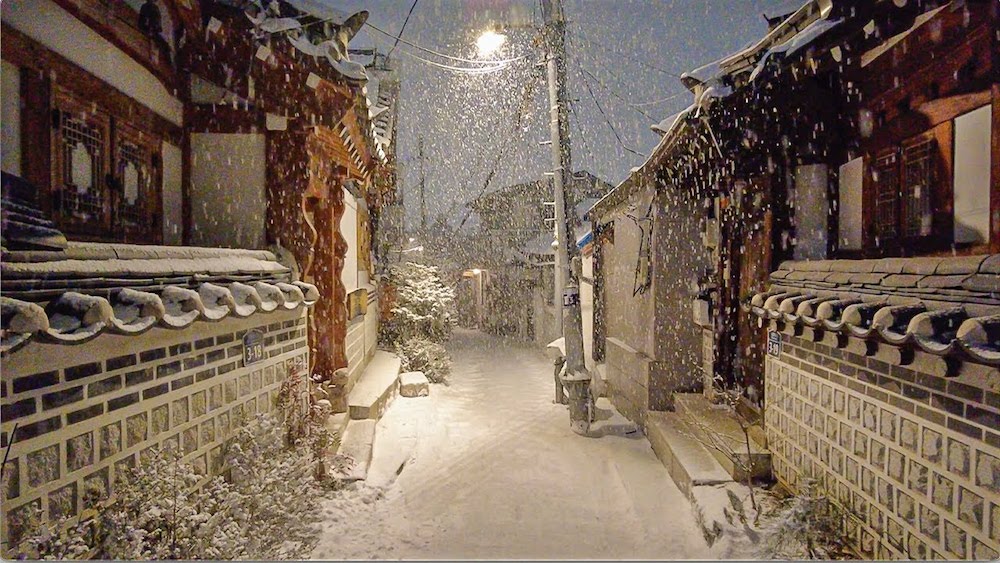 When first I visited Korea, almost exactly seven years ago, I came on a mission. Actually, I came on more than one mission, traveling while not only recording a series of podcast interviews, but also writing a few pieces for the Guardian on the cities of South Korea. For the latter I sought out recently developed downtown showpieces like the Dongdaemun Design Plaza and the Cheonggyecheon, Seoul’s famous freeway overpass turned urban stream, both of which Seoul Waker brings together in a single stroll. I even crossed the country to explore places like the brightly colored Gamcheon Culture Village on a hillside in the city of Busan, which happens to be the setting of Seoul Walker’s latest video. Shot over more than an hour at dusk, it contains many a “very narrow dark alley,” in the words of its title, but nary a living soul.

That video showcases the purity of form Seoul Walker has attained. Most of his work follows a simple formula: a single walk, stringing together multiple sites of visual interest, with no cuts and no commentary besides text added afterward. He used to write in both Korean and English, but of late only the latter, suggesting a prioritization of foreign viewers; at the same time, he’s also begun to emphasize his videos’ relaxing properties by labeling some “ASMR,” a phenomenon with enthusiasts everywhere, but especially in Korea. There’s no unsteady cellphone camera, no inarticulate grasping for meaninglessly superlative expressions of enthusiasm, no “Hey, guys” at the beginning or “Like and subscribe” at the end: this, it seems to me, is a way forward for the stunted art of travel vlogging, a conclusion confirmed by my prolonged exposure to various other Youtube channels in preparation for a repeatedly pandemic-delayed American road trip. 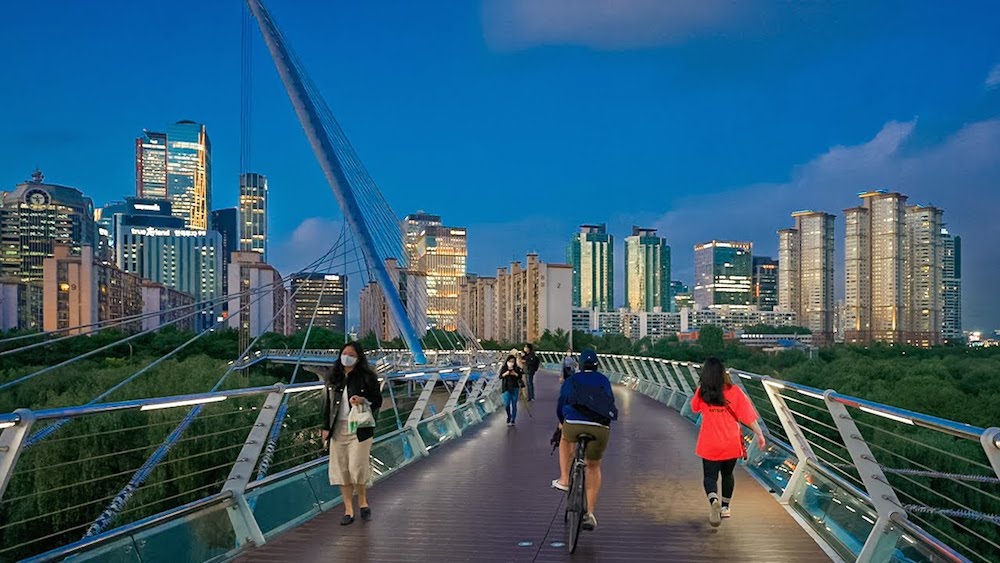 Moving to Korea, I hoped eventually to see my native United States as fascinating, even exotic; I wanted, in other words, to one day travel to America with the same attitude that motivated me to go someplace new, camera in hand, every single day of my first visit to Korea. Naturally, I know Seoul — to say nothing of the rest of this country — far better now than I did then. But given how many of my days are currently spent at the same few Sinchon coffee shops, I can’t deny that much remains for me to discover. Seoul Walker shows me places I’ve never been: to the “food alleys” of Bangi-dong; to the slopes of wealthy Seongbuk-dong (namesake of one of my favorite eateries in Los Angeles’ Koreatown) where Bong Joon-ho shot scenes of Parasite; to Hannam the Hill, home to members of BTS and other celebrities besides.

I’ve also come to appreciate Seoul Walker’s views of places I have been, like Gongdeok, where I meet my Korean language teacher, or the Starfield Mall, which gets no more intuitively navigable no matter how often you go. There’s also an exploration of my favorite structure in Seoul: Sewoon Sangga, famed architect Kim Swoo-geun’s 1960s electronics market and apartment complex, which I’ve written about more than once. Such spaces benefit from being not simply regarded, but experienced in motion. So does the Gyeongui Line Forest Park, which Seoul Walker has visited and revisited, and along which I walk almost daily. I did so on a pleasant afternoon a few weeks ago, surrounded by families, couples, dog-walkers, and picnickers of every generation, none disturbed by the forms of supposedly “urban” disorder too often accepted elsewhere. In how many of the world’s cities, I wondered, could any amount of money buy this? 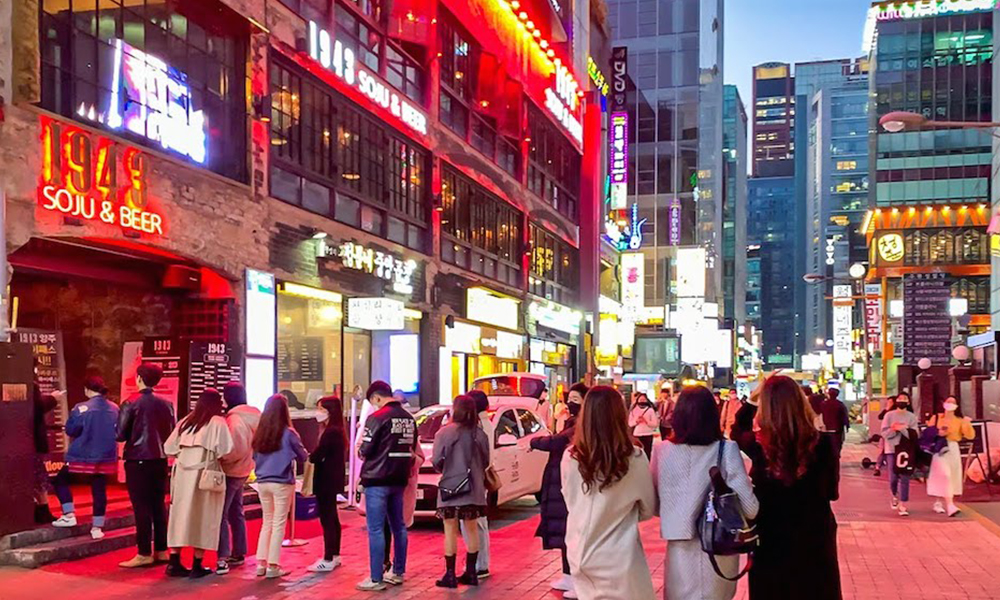