Since the original Blade Runner takes place in an imagined late-2010s Los Angeles, I’d have gotten a kick out of seeing its sequel, which after prolonged speculation finally came out late last year, in the actual late-2010s Los Angeles. But having moved to Korea a few years ago, I settled for a screening here in Seoul. In some ways, this ultimately felt like the more appropriate city in which to see the movie: when Blade Runner 2049‘s first trailer came out, I wrote here about its apparent acknowledgement of the considerable Korean influence felt in Los Angeles since its predecessor’s release. While no small number of Koreans already lived there back in 1982, the makers of Blade Runner — like everyone else at the time — couldn’t see past the economic rise of Japan, whose cash-flooded conglomerates then seemed poised to buy up not just Hollywood’s studios but the downtown skyline as well.

When I did make it back to Los Angeles earlier this year, I saw sights that proved more memorable than even the spectacles of Blade Runner 2049. Coming in from the airport, for instance, I looked up to see the Korean Air logo looming 73 stories above downtown at the top of the Wilshire Grand Center, a building still under construction when last I saw it. Then, lowering my sights from that glowing orb so reminiscent of the South Korean flag, I spotted a tent village that had sprouted in the darkness of a freeway underpass. The first Blade Runner envisioned Los Angeles as having plunged into a kind of third-world condition, with its ruling class perched high above (if not on a different planet from) the teeming common element doing business in countless different languages down in the streets. Something tells me that the contrast in the real 2019 might look even starker than that.

But then contrast lies at the heart of the science-fiction tradition of cyberpunk, the most influential examples of which include Blade Runner as well as William Gibson’s Neuromancer, published in 1984 and now considered the archetypical cyberpunk novel. The common description of Gibson’s work of that period, “high tech meets low life,” also broadly characterizes cyberpunk itself, which, unlike so much sci-fi of earlier generations before, understands that technological progress doesn’t come with moral progress. Nor does it come with the kind of widespread social or economic progress upon which many stories of the future once premised themselves. Nor does that high tech penetrate all areas equally: “The future is already here ,” said Gibson in what has turned out to be one his most-quoted lines. “ It’s just not evenly distributed.” A visitor to Seoul, even if they’ve come from the supposedly developed West, might feel as if they’ve entered one of those unevenly distributed chunks of the future. The obvious elements are all in place: the shiny skyscrapers and the colossal video screens on their sides; the punctual, usually unsoiled subway trains and the riders streaming high-definition video or playing startlingly advanced-looking games on their phones. But one doesn’t have to stay long to be impressed less by the technology itself than by how thoroughly it has integrated with the life of nearly all Seoulites. Here, in a place where even grandmothers stand in line for and the latest smartphone, the fact that some middle-aged Americans have never bothered to get one at all looks like an example of the reverse luxury possible only in a terminally decadent culture.

Cyberpunk’s list of required conditions includes not just technology, but all-pervasive technology. Often, characters must wield their personal technology to evade the impersonal technology commanded by their corporate overlords. Does anyone make an attempt to evade the surveillance going on in seemingly every corner of Seoul, a saturation that surprises even visitors familiar with the all-seeing CCTV cameras of London? Enthusiasts of cyberpunk, attuned to its essentially dystopian nature, will also quickly take note of how Korea seems to have taken the genre’s convention of a few mega-corporations running the show as its economic model. True Korean corporate loyalists can buy just about everything — food, entertainment, healthcare, car, home, and much else besides — from the same conglomerate, or chaebol.

I actually saw Blade Runner 2049 at one of a chain of chaebol-owned movie theaters myself. At that same multiplex, conveniently located right across the street from my apartment building, I’d previously seen Oshii Mamoru’s acclaimed animated cyberpunk film Ghost in the Shell. The original Blade Runner had taken Los Angeles and Japanified it, bringing in as much the boisterous, freewheeling urban Japan of centuries past as the outwardly straight-laced technopolis of 1980s Tokyo. Ghost in the Shell cast as its near-future Japanese setting of “New Port City” an apparently little-altered Hong Kong; the tour-de-force montage in the middle of the movie constitutes a master class in not just how to make a place come realistically alive in animation, but to unify setting, theme, form, and substance at a stroke. Oshii’s Ghost in the Shell underwent a small theatrical revival here in advance of the arrival of last year’s live-action Hollywood remake. Though partially shot in Hong Kong (and mostly in, of all places, Wellington, New Zealand), the new film’s action — and a considerable amount of action it is — gives the strange impression of happening nowhere in particular. Much like Blade Runner 2049, it doesn’t much benefit from the inevitable comparison to the original, but it misses its biggest opportunity in its use of place. Along with the transposition to live action, I though as I watched, why not set the story somewhere completely different as well? Why not set it in a city requiring little in the way of set dressing to achieve the proper cyberpunk aesthetic? Why not set it in Seoul?

I had these thoughts in a theater — another location of that same chaebol-owned chain — in Jongno, one of the areas of downtown Seoul least transformed by the last few decades of rampant urban redevelopment. As Exhibit A for why the city could provide the ideal setting for a cyberpunk film, we have the work of the expatriate photographers, pictures from two of whom appear here, who have found in Jongno and other sections a rich selection of classically cyberpunk vistas. The first and third photographs come from Noe Alonzo (who also has an Instagram account), and the second and fourth come from Steve Roe (who, in addition to his own Instagram account, also runs the Cyberpunk Seoul Facebook group).

As they and other similarly inclined foreign photographers know, cyberpunk does not live by skyscrapers and outdoor video screens alone. If it did, any of the new metropolises erected whole across China over the past few weeks would offer a superior setting. While Seoul does have one foot in the future, from the Western perspective, the other foot kept firmly in the past makes it a potentially great cyberpunk city. Or to use a different metaphor, one I’ve come across from time to time in Korean books about Korean society, this country runs simultaneously on two “clocks,” one of them pushed so aggressively to the present that it runs perpetually fast, and another that has barely moved for decades or even centuries. Korea, like cyberpunk itself, everywhere mixes the futuristic with the things and ways of the past. Hence the emphasis in cyberpunk photos of Seoul on mid-20th-century-style neon, above-ground power lines, and vast quantities of poured concrete. Whatever prescience displayed in Neuromancer  about how we would one day live online, Gibson himself has joked about the singularly un-prescient way he had its characters use pay phones rather than cellphones. That’s easy to laugh at today, but pay phones have retained an inexplicable prevalence in Korea, even though its level of wiredness far exceeds that of the United States. And many of the ingredients of the atmospherics that both Neuromancer and Blade Runner draw from detective novels and film noir exists here, from 1940s America-style cigarette-smoking to 1980s Los Angeles-style air pollution to constantly falling rain, at least during certain weeks of the summertime.

If at the dawn of cyberpunk readers and viewers got into it for a taste of the future, or at least the intensified present, a great many cyberpunk fans nowadays seem to want to go back in time. As the narrator of Thom Andersen’s Los Angeles Plays Itself says about why Blade Runner continues to fascinate, “Perhaps it expresses a nostalgia for a dystopian vision of the future that has become outdated. This vision offered some consolation because it was at least sublime. Now the future looks brighter, hotter, and blander. Buffalo will become Miami, and Los Angeles will become Death Valley, at least until the rising ocean tides wash it away. Computers will get faster, and we will get slower. There will be plenty of progress, but few of us will be any better off or happier for it. Robots won’t be sexy and dangerous. They’ll be dull and efficient, and they’ll take our jobs.”

Some of those same anxieties plague Korea, but on the whole it comes off as a country that looks forward to the future — or believes that the future exists, look forward to it or not —  more so than does the United States. Though constant, the complaints heard here tend to stop at the level of society rather than penetrate to the level of existence. That sometimes makes me wonder if this city can really become more than a backdrop for the themes the best cyberpunk stories deal with. So does the fact that, for all its supposed globalization, Seoul remains in many ways the opposite of the kind of city cyberpunk invented and has primed us to expect: Asian in form, but with non-Asian inhabitants driving the story. (Think of Neuromancer‘s setting of Chiba City, Japan, and its cast of almost no identifiably Japanese characters.) Cyberpunk may need a “world city,” and opinions differ on the Korean capital’s potential to become one. I myself would consider that, in the modern parlance, not a good look — but maybe I just believe Seoul has a few subgenres of its own to launch. 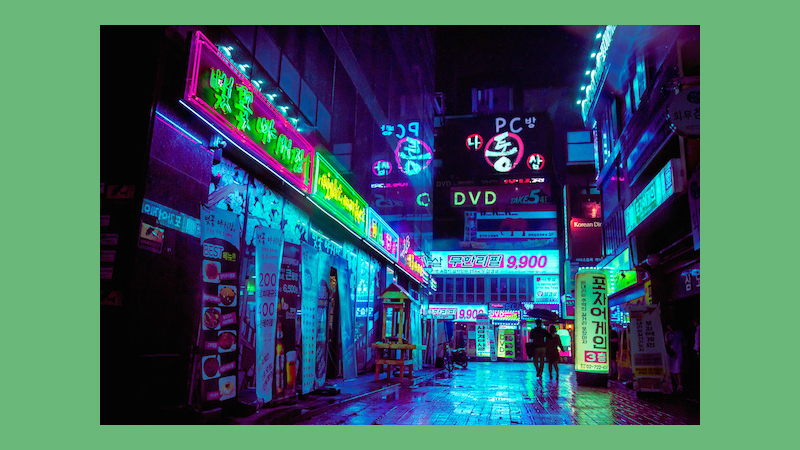