Last month my girlfriend and I visited Mokpo, a somewhat down-at-the-heels port town on Korea’s southwest coast, hoping to have a look at its Japanese colonial architecture and a taste of its tangtangi, a local specialty involving raw beef and still-twitching squid. Though Mokpo lacks Seoul’s density of screens, it has just enough of them to make us notice the same music video playing all over the city — and that its hot pink-suited dancers were cavorting through the very places we’d put on our itinerary. The production was, of course, part of a campaign to promote Korean tourism; more surprisingly, it had racked up well over 30 million views on YouTube since that campaign launched last summer. Driving the phenomenon was less the video itself, however picturesque and amusing its imagery, than the music, the work of an overnight sensation called Leenalchi (이날치).

Like all overnight sensations, Leenalchi’s roots run deeper than they appear to; this holds true even in the notoriously capricious popular culture of 21st-century Korea. Some run all the way to 17th-century Korea, where the traditional form of musical storytelling known as pansori has its origins. Though an unlikely source of inspiration for dance music popularized through YouTube, pansori has enjoyed its moments of modern-day popularity, the most notable having occurred after Im Kwon-taek’s Seopyeonje (서편제) in 1993. That film takes its title from a regional form of pansori; Leenalchi, in turn, take their name from 19th-century pansori master credited with developing it, Lee Nal-chi. Most of the band’s members have studied under pansori masters themselves, but their music has none of the rigorous purism of government-funded gugak, or “national music”: they’re pop artists first, creators of songs to be enjoyed in the moment. 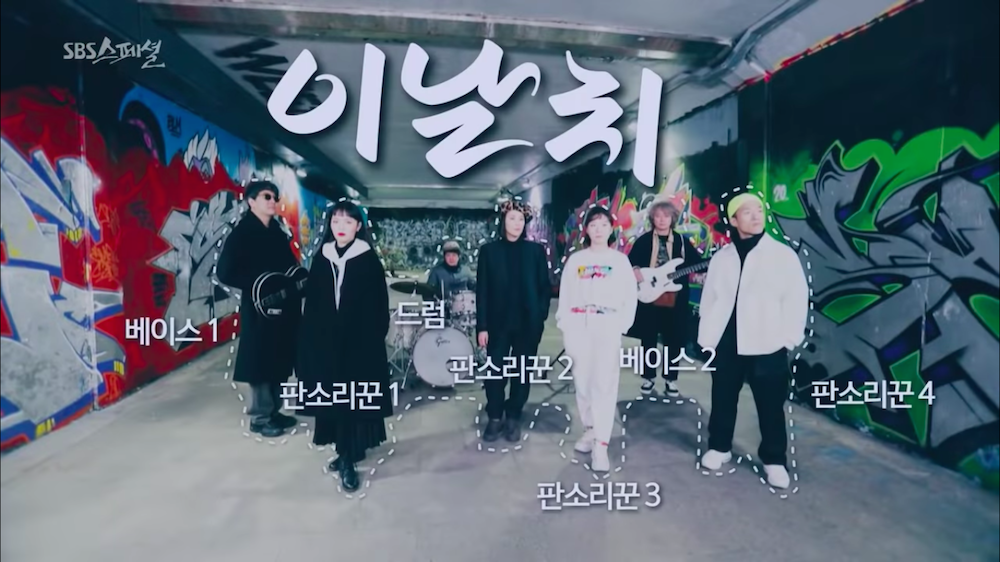 This, at any rate, is the line taken by Jang Young-gyu, one of Leenalchi’s masterminds. Long established as a film composer, Jang’s body of work includes the score for Na Hong-jin’s The Wailing (곡성), which in 2016 unsettled audiences the world over by repurposing Korean shamanism into the material for modern-day horror. He also played bass in Ssingssing, a cross-dressing “gugak fuion” rock band whose style also partook from shamanistic tradition. This seemingly niche act turned out to have global appeal: it was after Ssingssing receiving a hugely positive response to a 2017 show for NPR’s Tiny Desk Concert series, of all venues, that Jang came to understand the potential they’d tapped. The next year he and Ssingssing drummer Lee Cheol-hee played in Dragon King, a pansori-based musical production that put them alongside the skilled vocalists who would become their bandmates in Leenalchi.

The known pansori canon consists of only five stories: Simcheongga, Heungbuga, Jeokbyeokga, Chunhyangga, Sugungga, the last of which provides the title and lyrics for Leenalchi’s debut album (수궁가), released last spring. With its all-animal cast, Sugungga makes for a more rollicking narrative than the others, and Leenalchi’s songs set passages from it — sung with the strength and control for which Western pansori viewers can usually find no better adjective than “operatic” — to music that wouldn’t have sounded wholly out of place in a Western disco in the mid-1970s. Performed by only one singer and one drummer, genuine pansori uses minimal instrumentation, to put it mildly. Leenalchi honor this in the sense that their music is driven by rhythm and voice with no involvement of specifically rock-associated instruments like the electric guitar, though their sound’s underlying distinctiveness owes much to the presence of dual bassists. 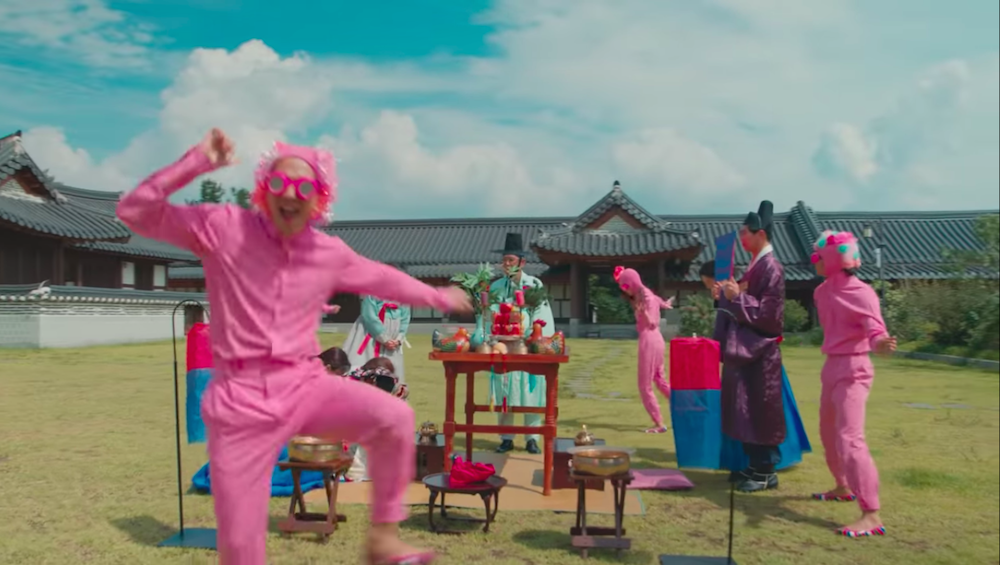 Pansori singing has been called an artistic expression of han, a kind of psychic pain visited on the individual by the history of the nation. I’ve long since grown weary of trying to describe han in any great detail, but often when it comes up, so does another supposedly Korean emotion: the spontaneous expression of collective joy known as heung. This concept is invoked in the appreciation of Leenalchi’s music, and as one explanation of why it has so rapidly found a such an enthusiastic listenership. Beset by a pandemic in response to which governments have severely restricted social interaction, humanity this year has needed nothing so much — apart from a vaccine — as a shot of heung. So, too, went the thinking of the Korea Tourism Organization, whose latest campaign has carried out its declared mission to “cheer up the world” to a soundtrack by Leenalchi.

This past summer the KTO commenced their “Feel the Rhythm of Korea” series with three music videos: one shot in Seoul; one in Busan, the second city down on the southeastern cost; and one in Jeonju, a modestly sized city known for its traditional hanok houses. The second wave, released in the fall, show off the less internationally known towns of Mokpo, Andong, and Gangneung (real capital though it was, as I wrote here on the Korea Blog, of the 2018 Winter Olympics). In each video, flamboyantly attired members of the Ambiguous Dance Company dance to a different Leenalchi song in a series of popular tourist spots: Busan’s Gwangalli Beach, Jeonju’s Hanok Village, Andong’s Byeongsanseowon Confucian Academy. The series has proven popular enough to inspire a variety of derivative works, including locally produced “parodies” (which are really more like straightforward homages) in Gangneung, Mokpo, Jeonju, Gwangju, and elsewhere.

But it is the original Seoul video, with its moves busted at the presidential Blue House, the Samsung Museum of Art, and Zaha Hadid’s Dongdaemun Design Plaza, that has gone the most viral of all. The relative recognizability of the capital must have something to do with this, but so must the catchiness of the song: “범 내려온다,” or “The Tiger Is Coming,” which first wormed its way into many an ear through a video performance with the Ambiguous Dance Company in the fall of last year. No other work is more responsible for Leenalchi’s fame, and with fame comes endorsement opportunities, extended not just by tourism boards but major conglomerates. Hence the band’s advertisement last month for Samsung’s Galaxy Z Flip 5G X, in which the hook of their signature song becomes “the phone is coming” — a groaner of a pun in Korean. 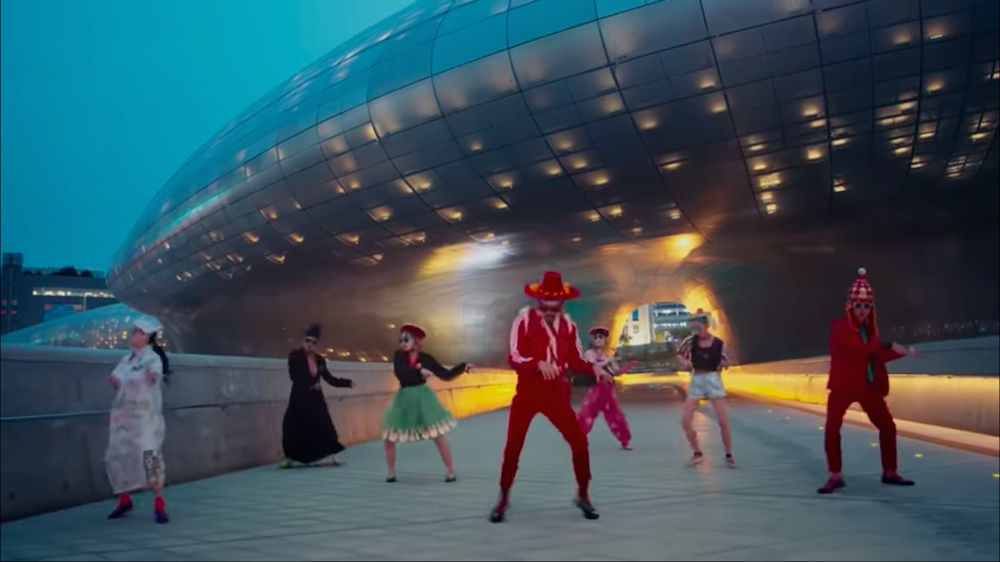 There has also been smaller-scale work, like traffic-safety announcements for the Busan Police Department and psychedelic spots for the chain Pizza Alvolo. You could take this as a sad commentary on the circumstances of even successful musicians and dancers in 2020, robbed by the coronavirus of their ability to perform live. (A recent SBS special showed Leenalchi and the Ambiguous Dance Company playing a socially distanced, somewhat heung-impaired outdoor show, and being glad to do it.) But in Korea, endorsing cellphones and pizza isn’t a celebrity’s last resort; on the contrary, only appearing in commercials proves definitively that a performer has “made it.” Even Psy, Mr. “Gangnam Style” himself, put in time hawking instant ramen, packaged dumplings, and printer paper — to say nothing of BTS, the boy band-turned-global-phenomenon who do so many commercials that their fans collect them into yearly compilations.

These acts have demonstrated that, despite the considerable successes abroad of its television dramas and films, nothing in Korean popular culture travels like its music, especially in video form. “Official Korea,” as I call it, has come a long way in using this knowledge over the past couple of years. Dedicated readers of the Korea Blog will remember the KTO’s previous attempt to enlist pop-star talent into the service of growing Korea’s tourism industry, whose result had members of the boy band EXO asking, in poorly dubbed voices, whether the viewers had ever been to a restaurant, “taken a rest,” or slept. This collaboration with Leenalchi and the Ambiguous Dance Company has proven rather more compelling — ironically, at a uniquely inopportune time for international travel, now that the coronavirus has made domestic tourists of us all. But then, if it hadn’t, when would I have made it to Mokpo? 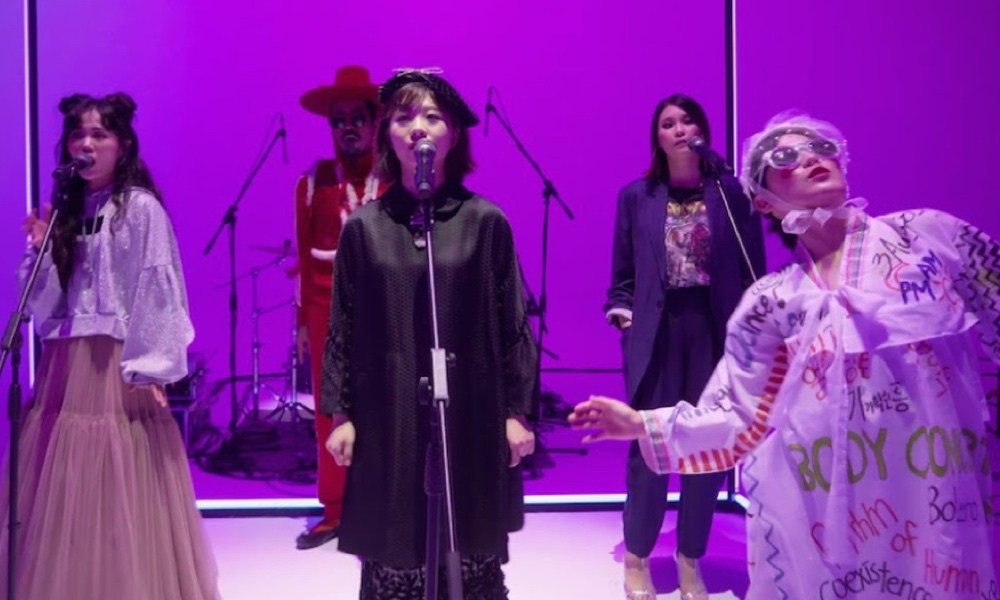