Western expatriates in Asia often see themselves as having missed out on their adopted homeland’s golden age. I arrived recently, just under five years ago, and have since heard much about how I really should’ve been here at the time of the World Cup, if not in the 1990s. Some time ago I met an American here in Seoul who’d first come to Korea in the 1970s as a Mormon missionary. He confirmed what I’d suspected: even back then, the Westerners who’d preceded him were telling him he really should’ve been there in the sixties. Many who came from the West in those decades came for missionary reasons, religious or otherwise. Some, like Kevin O’Rourke, stayed for the long haul, diversifying their activities all the while but never, of course, forgetting the prelapsarian age in which they’d arrived.

“You really had to see Korea in the sixties to know what it was like,” writes O’Rourke in the opening of My Korea: 40 Years Without a Horsehair Hat. “Korea time was the conceptual axis on which the culture turned. Modernization and the need for quick decisions has done away with this lovely, lazy, exasperating way of life.” Back then, “when you didn’t know any other way home, it was normal to ask the traffic policeman to reverse the traffic on a one-way street, and invariably he obliged.” This seems to have been a favorite memory: O’Rourke repeated it in the media interviews entailed by his status as a famous foreigner, and the Korea Times included it last month in his obituary. Having made the initial trip from his native Ireland in 1964, he had by the end of his life spent 56 of his 81 years here in Korea.

Readers of Korean literature in translation may well know O’Rourke’s name, bring as he did more than 2,000 Korean poems, stories, and novels into the English language. These include “Wings” (날개), Yi Sang’s bizarre modernist tale of colonial humiliation (O’Rourke’s rendition of which I studied just a few years ago at the Literature Translation Institute of Korea), and The Square, Choi In-hun’s sweeping novelistic critique of Korea both North and South (the partial inspiration for last year’s sprawling exhibition at the National Museum of Modern and Contemporary Art). He also taught English literature at Kyung Hee University in Seoul for nearly four decades, but he was at the core a man of the cloth, a priest brought to Korea by the Irish Catholic Missionary Society of St. Columban.

This is a path broadly similar to that taken later by another prominent translator originally from the British Isles, Brother Anthony of the French Christian monastic fraternity Taizé. (Though best known for his translations of poets like Ko Un, Brother Anthony also commands the French language, and in 2018 produced the English version of J.M.G. Le Clézio’s novel Bitna: Under the Sky of Seoul.) I can’t be the only one hoping Brother Anthony writes a memoir, nor the only one to whom literary translators make the most compelling memoirists. Books by such figures about their lives in Japan — Donald Keene’s On Familiar Terms, Edward Seidensticker’s Tokyo Central, John Nathan’s Living Carelessly in Tokyo and Elsewhere — did their part to subconsciously convince me of my own need to live in Asia. O’Rourke’s book is the rare example of a modern-day memoir written by Westerner in Korea.

O’Rourke himself, however, would probably not have called My Korea a memoir. “This book is not an autobiography,” he writes in the introduction. “I shudder at the thought for I am a private man.” So, it seems, are many who go abroad with a religious order. I always want to know exactly what drove such men to so dedicate their lives in the first place, but actually asking somehow feels like a breach of decorum. Unsurprisingly, O’Rourke doesn’t address that chapter of his own life, though he does spend a page or two recalling the rural Ireland of his youth, which for all its deprivations turned out to be a developed country compared to the Korea of the 1960s. He has more to say about the virtues, vices, and eccentricities of the Columbans who showed him the ropes of life in what was then a “medieval land of total insignificance.”

O’Rourke’s stories of his early Columban life in Korea tend to involve unreliable jeeps, dirt roads, abundant hospitality, and heroic quantities of alcohol. “It wasn’t easy not to drink too much in the Korea of the time,” he writes. “In 1964 a bottle of Chivas Regal in the Foreigners Commissary in Seoul (a government sales outlet designed to get badly needed greenbacks) was three dollars, and a bottle of French wine was one dollar,” the same price as a can of Coca-Cola. O’Rourke’s descriptive shyness does not extend to his people’s relationship with the drink, one of the qualities that forms the basis of Koreans’ image as “the Irish of Asia.” On this common ground O’Rourke also places emotions widely thought of as uniquely Korean: the spontaneous collective joy of heung, the charming splendor of meot, and even the history-instilled bitter resentment known as han.

“There is just as much han per square inch in Ireland as there ever was in Korea,” writes O’Rourke. Both know “the han of a divided nation, the han of years of political and cultural exploitation; the han of the widow; the han of the childless woman; the han of the woman who sacrifices her own life to look after her ageing parents; the han of the abused daughter-in-law.” About these and other, more fortunate categories of female O’Rourke has much to say, first that “most foreigners will agree that Korea’s women are her finest product.” This despite (or some would say due to) his having, as a Catholic priest, no experience of life with a Korean wife. But that condition also grants him a socially and historically expansive view of Korean womanhood, encompassing court ladies, glamorous widows, mercilessly shrewd business dealers, insane exhibitionists, and more than a few poets.

Unlike an ordinary memoir, much of My Korea is taken up by verse: O’Rourke’s translations, especially of 20th-century poet Seo Jeong-ju, but also, occasionally, his own work. The latter poems, much like the titled vignettes that appear now and again in the text (“THE PARISH PRIEST BAMBOOZLES THE LOCAL GENDARMERIE”), pay tribute to the Columbans who came before, make observations about everyday encounters both rural and urban, and poke fun at the ways of Koreans and foreigners alike. “A lot of the fun of living in Korea comes from bumping into the shell of Confucianism,” he writes in one of the more straightforward prose sections. “The early missionaries talked and wrote about it gleefully, but no one talks or writes about it very much anymore.” Even “Koreans don’t seem to know what Confucianism is anymore except to say that it is all-pervasive in society, whatever that means.”

O’Rourke argues that “self-cultivation and inner freedom, which are the enlightening elements in Confucianism, have disappeared from the discussion,” leaving only a “stifling formalism.” Illustrating this, he spends more than twenty pages on a translation of the legend of a dutiful government official in the 19th-century. That time was the tail end of the 500-year Joseon Dynasty (the era of the subtitle’s horsehair hats), whose Neo-Confucian state ideology forced what O’Rourke calls a “dissociation of sensibility.” This new orthodoxy “inculcated a way of life that eschewed passion. Reason was the supreme faculty; imagination (also feeling and sensation) was suspect. The emergence of rigid moralism was inevitable.” But things have changed since the Joseon Dynasty: if women were then subservient, “it is apparent that men will be (or perhaps already are) subservient in twenty-first century Korea” — not that he advocates for “the substitution of one tyranny for another.”

He also notes, neither approvingly nor disapprovingly, that “young men are becoming more feminine in their actions and looks, because — some say — they have been reared like princesses.” This is one of the more superficial changes in Korean society to which O’Rourke bears a long-term outsider’s witness. A deeper transformation manifests in Korean poetry, whose abstract turn in recent decades he sees as having stripped the form of recognizable details of Korean life. Late in the book he lists the sort of details he misses: the “nubile, kiss-bitten women pushing reluctant men out to work,” the “democratic affront of the apartment speaker system announcing without apology imminent electrical outs,” the “the fruit vendors offering cheap fruit procured cost price in East Gate Market.” Such sights and sounds filled the work of socially observant poets like Seo Jeong-ju and Ku Sang, both gone since the early 2000s.

Still, even a Johnny-come-lately expatriate such as myself can tell you that these things have yet to vanish entirely from Korean life, including the life of the capital, a city imagined the world over as high-tech and cosmopolitan. Nowhere in O’Rourke’s cultural analysis does he take the view of 21st-century Koreans as black-haired Westerners-to-be who just happen to speak their own language. Some differences, to his mind, are too deep-seated for global cultural homogenization, such as Korea’s moral, conceptual view of beauty: “They see a rose that is the essence of every rose; they see a symbol of the universal.” From here O’Rourke draws a surprisingly convincing line to the aftermaths of the kind of disasters that have figured prominently into the Republic of Korea’s short history, from “money problems in the various governments of the last thirty years,” as he politely put it, to collapsing buildings and bridges.

My Korea came out in the summer of 2014, and O’Rourke had presumably finished it before the  the M.V. Sewol sank in the spring of that year. But in the event, the response to that inexplicable catastrophe, and the ensuing mood of national despair, followed the script: “There is a great outpouring of moral outrage; blame is apportioned; myths of responsibility are created. [ … ] The outcry every time is of tidal proportions; as if this were the first time such moral turpitude had raised its ugly head among us. The myth-maker resigns” — or gets impeached — “the angry waters subside and everyone holds their collective breath until the process begins again.” In his more than half a century in Korea, a period coinciding almost entirely with the country’s rapid and often haphazard process of modernization, O’Rourke would have experienced many such cycles.

Having read O’Rourke’s memoir — or “miscellany,” as he labels it — I feel even greater regret at never having met him to hear his stories of bygone Koreas first-hand. (Nor did I ever encounter that other famous Columban, the sheep-farming Father McGinchley of Jeju Island, who died in 2018 and surely had a few stories of his own.) But I will recommend it to the Westerners who come to Korea after me, whatever calling brings them here. Its final chapter on learning the Korean language constitutes reason enough to read the book, as do the pieces of advice dispensed throughout. “I discovered very early that Korea gets in the blood,” he writes. “If you are going to leave, you better get out before the five-year limit.” The five-year anniversary of my own arrival is coming up this week, as it happens, and I have no plans to get out. 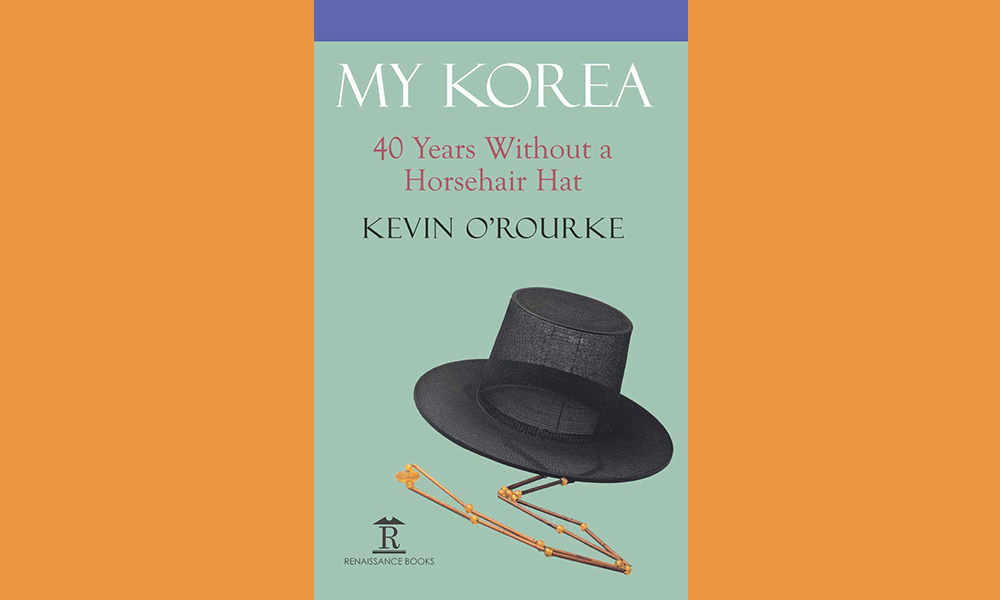