Like any country afflicted by an inferiority complex, South Korea has shown an avid interest in winning Nobel Prizes, to the point of scrutinizing and attempting to adapt for itself the customs of the nations (and even ethnicities and religions) that have managed to produce large numbers of Nobel laureates. But apart from the 2000 Peace Prize, awarded to pro-democracy activist and then-president Kim Dae-jung, the dream remains elusive. A few Korean or Korean-born scientists have come up as potential future winners, but the hopes of recent years have been repeatedly pinned on the poet Ko Un, who, at the age of 84, continues — to the great frustration of Korean culture’s global promoters — not to win the Literature Prize.

Nevertheless, Korea does have a Nobel-winning champion in French novelist Jean-Marie Gustave Le Clézio, whose receipt of the Literature prize in 2008 occasioned a scramble to make his work available in the non-Francophone world. Even before being granted the sacred object, however, he’d already become something of a public figure in Korea, having arrived here the year before to teach French language and literature at the prestigious Ewha Womans University. “Le Clézio was a Nobel literature prize candidates in 2007, and reporters camped outside his house in Seoul on Oct. 11, the day the winner was announced,” writes Esther Lee in an early-2008 piece in the Joongang Daily. “Asked if he knew reporters were waiting for him, he laughed. ‘I was out that day, riding the subway,’ he said. The award went to Doris Lessing.”

The article also points out Le Clézio’s enthusiasm for Korean literature, “which he describes as dynamic and multicolored.” The Nobel’s arrival in 2008 provided him with an enlarged platform to promote it, especially in his homeland: “Korean literature is written in a hard language, without affectation, pity for oneself or satisfaction,” he wrote in a Le Figaro, “but is always imaginative and allusive with self-deprecating humor that characterizes the Korean people.” A decade on, he has, in a sense, contributed a work of his own to the body of Korean literature with his new book Bitna: Under the Sky of Seoul, a short novel of connected tales set in the Korean capital.

Long possessed of a desire to write about Korea, Le Clézio considered and rejected the idea of a travelogue in favor of a novel, thus placing himself in the still almost imperceptibly small group of Western writers who have attempted to invent a cast of fictional Korean characters. Bitna’s includes a retired widower who trains pigeons to take notes to his family left behind in the North, an adolescent girl who goes from preyed-on church choir singer to preyed-on pop star, a hair salon owner and the other residents of her building and the wandering cat who facilitates their communication, and the titular storyteller who comes up with all of them, a 19-year-old college student from the countryside who finds work spinning these yarns for an audience of one housebound invalid.

Bitna, who finds in that storytelling gig a way out of her dreary day-to-day existence looking after her obnoxious cousin, reminds me in a way of Adam Pollo, antihero of Le Procès-Verbal (translated into English as The Interrogation), the debut novel with which a 23-year-old Le Clézio made his name 55 years ago. Adam finds a kind of splendid isolation, for a time, in an abandoned house near a seaside town; Bitna finds it in a dank room of her own near Ewha, the university where Le Clézio taught, in a hilly neighborhood she dubs “El Sordido.” As the increasingly scruffy Adam’s physical wanderings turn psychological, plunging him into the minds of the other humans and even beasts he happens upon, Bitna can’t make her way through Seoul without her imagination getting set off by the people around her:

A lady of about fifty. Dressed in a slightly threadbare black coat, with low shoes, carrying a handbag in imitation leather with two golden buckles. She has curled gray hair and wrinkles on each side of her mouth. Lives in Gangnam, in an apartment block. Divorced. Her apartment is very small. She would like to have a dog, but the rules forbid it. Her name is Mrs. Na Misuk. She used to work in a bank, behind a window, counting banknotes, making transfers. Then she resigned before reaching retirement age. She once had the thought of committing suicide, but she did not have the courage.

Bitna displays the same instinct for storytelling Le Clézio does when he speaks of his own explorations of Seoul — always by public transit, never by taxi — and the imaginative observation of the people he sees along the way. All that subway riding has served him well, and not just in keeping him away from the press on Nobel-announcement day: it also enabled him to write Bitna with a degree of geographical accuracy it would take a Seoulite to fully appreciate, locating the story of the protagonist’s life as well as the stories she tells amid not just landmarks like Seoul’s mountains, river, palaces, and streams, but even its real bus lines and subway stations. 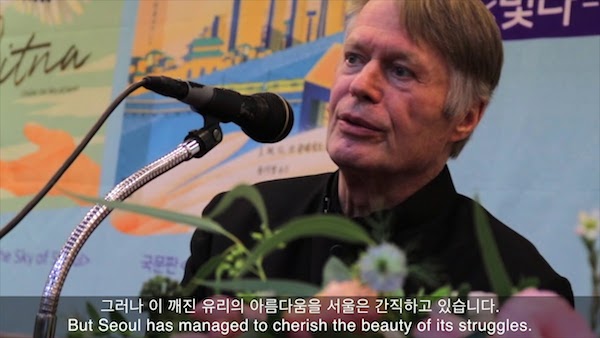 But then, it often takes an outsider to see clearly those aspects of a city that the natives regard as mere utilities, and that goes as well for transit infrastructure as it does for its most familiar forms of commerce: Le Clézio at one point has Salome, the terminally ill woman who hires Bitna to tell her stories, serve cookies from Tous les Jours, one of the chain bakeries seen in every Korean city, and which in Seoul seems to pop up every few blocks. I often wonder what visitors from Francophone countries make of them, but the internationally minded Le Clézio, no cultural chauvinist, doesn’t render  judgment on their sometimes questionable pastries, instead using them as one of a few subtle signifiers of a story that inhabits a kind of France within the Korean megalopolis.

This Franco-Seoul exists partly in the mind of the bookish Bitna, who resolves to learn the French language, “so gentle and musical,” and later makes a bit of extra money teaching it at a university. Salome, too, reads French literature in the original and lives “near the French high school in the southern part of the city” (and by far the richer half, that of the much-rapped-about Gangnam). Though the Mauritian-French dual citizen Le Clézio has spent much of his time outside France — part of his childhood in Nigeria, a couple of university years in England, long stretches in both Mexico and New Mexico, and even a chunk of the 1970s among the Embera-Wounaan tribe of Panama — most of his work has somehow never seemed cleanly separable from his native language, no doubt one reason for its scant presence in English when the Nobel committee came calling.

It also led Martin Amis, writing in the Observer in 1973, to call an English translation of Le Clézio’s novel War, “without the surface of the French,” such a “torment to read that one yearns for the kind of nouveau-roman pranking whereby (say) the final 150 pages are left blank in order to symbolize the void of late capitalism.” Even Adam Gopnik, an avowed Francophile and Le Clézio fan, once compared the writer’s lesser work to the narration of a Unicef documentary. And for all it electrified the French literary scene in 1963, Le Procès-Verbal, which I re-read in English before cracking Bitna, can become a slog here and there, despite its brevity.

But whether due to more than half a century of authorial maturity, an English translation by Brother Anthony of Taizé — best known as the English translator of Korean writers like Ko Un, but also, apparently, a skilled translator of French — or most likely a combination of both, Bitna‘s prose has none of the obscurity or heavy-handedness sometimes seen in Le Clézio’s early novels. The book does, however, deal with subjects about which many familiar with Korean literature or film may have already heard more than enough: suicide, the division of North and South, the hypocrisy of religious leaders, the capriciousness of the pop-culture industry, the isolation of the poor and the unwell, the placelessness inflicted by modernization, the unforgiving nature of life in the capital.

Unlike the spite or obligation to engage one sometimes feels from even the most admirable Korean writers — driven, it can occasionally seem, by the same inferiority complex that fuels the pursuit of the Nobel — Le Clézio approaches these conditions with what feels like appreciation, not just for Koreans themselves (“I found they were extremely funny people,” he once said, “not serious like the Chinese and not sad like the Japanese”) but for Seoul, a city whose constant change and fruitful disunity makes it, for him, a far better environment for writing than Paris. Le Clézio has expressed his wish to write more about Seoul, naming among his fascinations its elderly garbage-pickers, fortune-tellers, and taxi-drivers, and Bitna gas given me, here in my own corner of the city not far at all from El Sordido, reason to anticipate that.

The Poetry of, or Rather in, the Seoul Subway 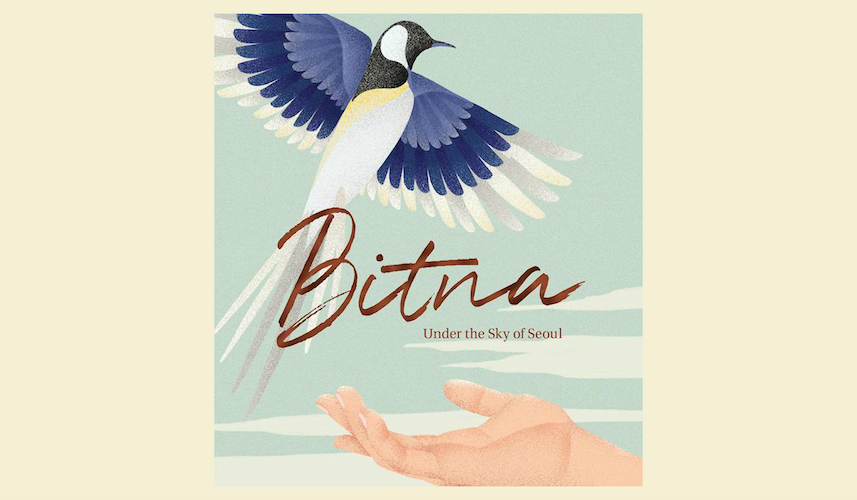