“This book has a precious little to recommend for itself. It reads more like a white man’s fantasy.” “The vaguely creepy paternalistic narration was extremely off-putting.” “I found his voice to be a little bit too ‘male.'” “It would have been a good book if he had left his commentary out of it.” “I have to say I was pretty offended at times.” All these judgments come from the Goodreads user reviews of Simon Winchester’s Korea: a Walk Through the Land of Miracles, a book published well before the era of free-for-all internet commentary. It didn’t, however, come out as long ago as the complaints quoted here might make you imagine: 30 years have passed, and in that time has Winchester’s view of Korea, as well as the Korea he viewed, grown hopelessly outdated?

Whatever the answer to that question, the book has held its place on the very short list of essential long-form travelogues of modern Korea. In fact, it nearly constitutes that list by itself, the other possible candidates having fallen quickly out of print and into obscurity after the small burst of interest in the run-up to the 1988 Summer Olympics in Seoul. Winchester, too, wrote his book with the Games in mind, wanting to see as much as possible of the country that had charmed him as a Hong Kong-based Asia correspondent before it opened itself more fully to the wider world. As much as Korea has changed since then — not least due to its late-1980s conversion to “near-beer democracy,” as he calls it, so painstakingly scrutinized by many of those other forgotten volumes — something about Winchester’s take on it has endured.

“With all the enthusiasm of a naif,” Winchester remembers in the introduction, “I planned a book that would present a series of ruminations about the Korean people, who are quite unsullied by the evils of money making, are uninterested in the mechanics of power seeking, and had long forgotten the miseries of battle. I would, I vowed, go straight for the kokoro, the often-ignored, rarely understood heart of modern Korea.” Two things stand out here: first, that few would now (or even then) call the Korean people “unsullied by the evils of money making,” and second, that kokoro is the Japanese word for heart, not the Korean one. He does explain his use of the term toward the end of the book, but too late to steady the shaken confidence of a reader familiar with east Asian languages.

Unable, given the events of the heady 1980s, to wholly avoid “the context of war, economics, or politics” as he’d planned, Winchester decides to take a walk across Korea — the entire length of Korea, beginning on the southerly Jeju Island, site of a 1653 Dutch shipwreck, the cross-country path of whose  surviving sailors he retraces. He takes to months to do it, along the way encountering a fair few memorable characters, strangely many of them Irish. Or maybe all of them: “They’re so like the Irish,” someone says of the Koreans early in Winchester’s journey. “They’re sweet and sentimental. They’re sad. They sing songs, and sad songs, too. But if you get them angry, you’ll be terrified. They have a kind of anger that is unforgettable. They completely lose control of themselves. They’ve no idea what they are doing.”

One Irish psychiatrist — a genuine Irishman resident in Korea rather than one of the so-called “Irish of Asia” — lays out a pet theory that analogizes the developing country directly to a growing child: “First, a baby has a physiological need. He needs food, he needs milk. Then he realized he needs something to hold on to — he needs security. Following me? Next, when he becomes a teenager, he needs love. Then he needs self-esteem — that’s when he becomes ambitious, tries to accumulate things that make him feel good about himself. And then he needs growth — he must expand his family, his interest, his influence on the world.”

This sort of talk might today be condemned as essentialism, but then, so would most of the pronouncements made, often in suspiciously eloquent English, by the Koreans Winchester encounters on the road. “It was so unusual, he said, to see people in Korea doing things alone,” he writes of the only other lone hiker he comes across. “The Confucian spirit, he said, laid great emphasis on the group, on togetherness. ‘Solitude is not a Korean pleasure,’ he said.” Winchester later theorizes, having “heard it said time and again that Koreans revel in their sadness, wallow in their misfortunes, and make much — too much, critics say — of their having been invaded and subjected so many times,” that “a Korean wouldn’t be a Korean without being able to feel happily miserable about himself, his heritage, and his history.”

The 21st century has no doubt seen all manner of terms coined to condemn the cross-cultural spectacles Winchester relates elsewhere, especially the ones involving women that so bother the Goodreads reviewers. More than one bar girl marvels at the abundance of hair on his arms: “Anna, emboldened by the beer, or perhaps overcome with the doubtful magic of dancing with a gorilla, thrust her hand down the front of my shirt and felt every last detail of my chest.” Winchester returns the favor and experiences “a glorious moment of feeling her very substantial breasts and feeling their nipples stiffen to my touch.” The very same thing happens farther north: “She wasn’t in the least bit offended, and in fact her friend rushed into the back room to get her camera for a picture of the happy scene.”

As much as these lines read as if torn from the diary of a sex tourist (or of Hustler magazine’s infamous 1988 “Guide to Korean Sex,” ostensibly published as a service to the randy Olympics-goer), the book ends as sexlessly as it begins. “Winchester spends a lot of (admittedly interesting) pages describing his encounters with Korean prostitutes just before something interrupts their copulation,” notes another Goodreads user. One such suddenly aborted encounter leads into a paragraph-long rumination which, for better or for worse, merits quotation in full:

Korean women, I am bound to think, present a most bewildering and complicated mixture of emotions and attitudes. One woman can at the same moment be delightfully shy and yet alarmingly forward, liberated and yet coquettishly deferential, sexually ignorant and yet wantonly promiscuous, aggressive and argumentative and yet strangely sulky and passive. So very different from the Japanese — so friendly, so curious, so studiously attentive. The baser side of me would often think that for stimulation and curiosity value alone there could probably be no greater woman than the Korean, but life could at the same time perhaps be pretty hellish, I have no doubt.

I’ve had a few occasions to refer to this passage over the years, including as a near-perfect description of the female characters with which the well-known Korean filmmaker Hong Sangsoo populates his purgatorial sexual landscapes. Like many of the other observations Winchester makes in the book, it tends to draw objections of the kind seen on Goodreads: creepy, offensive, male, and now the dreaded problematic — but somehow never wrong, the issue seeming to be less what he writes than what he acknowledges.

Korea’s second Olympics, going on as of this writing, have provided at least one more Western man an opportunity to draw ire for his remarks on the country. “Every Korean will tell you that Japan is a cultural, technological, and economic example that has been so important to their own transformation,” said NBC commentator Joshua Cooper Ramo during the broadcast of the opening ceremonies in Pyeongchang. The blowback to that statement, full of labels like hurtful, divisive, and insensitive, came as hard and as fast as it did not exactly because Ramo called Japan an example to Korea, but because he said that every Korean will tell you so.

That’s not to say that Korea, as Winchester puts it, hasn’t “spent the better part of its four thousand years being invaded, crushed, subjugated, colonized, or in other ways trampled on: All its neighbors have made good use of the little peninsula — the Chinese, the Russians, the Mongols, the Manchus, and the Japanese have all seized and invaded and wrecked according to their wants and moods.” He adds that “the cynical though not wholly unreasonable view” holds that “today’s Americans are following in the same ignoble fashion,” which makes me wonder: as an American — surely the world’s most offendable people  — should I be taking offense as well?

Winchester, an Englishman whose nationality automatically scores him points as a “gentleman” with every Korean he meets, stops at several American military facilities across the country. The punishingly plainspoken Americans he meets there usually come off as possessed of, as he euphemistically puts it, “an uncomplicated view of the world.” One tells him that “we Americans are the strongest and the best. No doubt about it. And President Reagan’s our commander in chief, and whatever he tells us to do — then, yes sir! — we’re going to do it and do it proud.” Another, amid complaints about his host country, describes his plan to return to America: “Got me a real nice condo, and I’m fixing to go into the aircon business in Florida.” Another repeatedly calls taxi drivers atashi, which Winchester explains as “an overfamiliar way of saying ‘uncle'” but which is actually a Japanese feminine personal pronoun. (He almost certainly meant to say ajeossi.)

In the three decades since Winchester’s Korea, Korea itself has risen to a previously unimaginable prominence in the world. But apart from a handful of intelligent primers on the country and its history in recent years, English-language nonfiction books about Korea have lagged far behind. Writing of that kind by Koreans (whether raised and educated in Korea or elsewhere) seldom gets much traction, often for good reason, while outsiders have shied away from writing experiential books on the country almost entirely. A certain current now exists in the media presenting Korean society as fundamentally similar to any other, but it isn’t: Winchester understood that, and his willingness to confront how and why, as directly as possible and to the best of his ability as a travel-historical generalist, has kept his book on Korea on the shelves — which isn’t to say that, 30 years after its first publication, it couldn’t use another update. 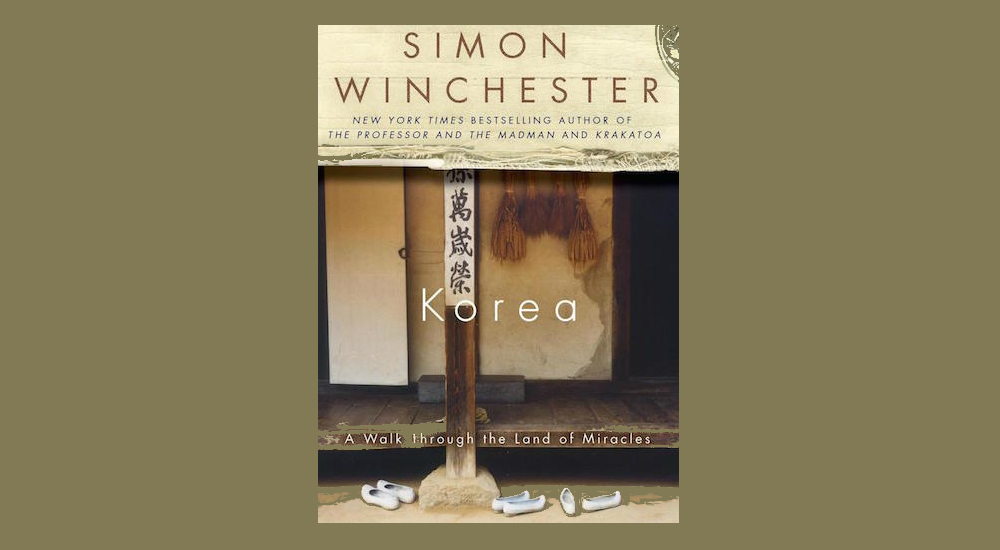