You still see the yellow ribbons here and there around Seoul. I remember seeing them even in Los Angeles, pinned up by the hundred outside the Korean consulate building on Wilshire Boulevard. I got a couple yellow ribbons of my own last week, freebies that came with admission to Kin Jin-yeul’s new documentary Cruel State (나쁜 나라), which follows the quest for answers undertaken by the parents of the high-school students who perished last April in the sinking of the MV Sewol, the disaster which precipitated the yellow-ribbon flurry.

Cruel State covers, in roughly captured but often striking handheld video images, the year and a half after the incident, during which time a group of these parents spent beating on the Korean government’s door, seemingly full-time, marching to various official buildings and camping out on their steps, confronting a host of blank-faced representatives, heckling the president and even making their way up to her house, all the while demanding to know why their children had to die on a field trip. It should hardly count as a spoiler to tell you that the parents end the film in possession of as few answers as they had at the beginning.

In a sense, we know exactly why those kids died, having long had the facts laid out for us: the overloaded cargo hold, the underloaded ballast tank, the sudden turn, the nearly untrained crew, the captain not even asleep at the wheel but nowhere near it. But nobody has yet explained to anyone’s satisfaction, let alone to that of the families of the deceased, why the nation watched the ship sink on live television while an ineffective and seemingly incompetent rescue operation flailed around it. Absent a thorough explanation, the parents would at least like someone to take credible responsibility for those 304 lives lost.

“I take full responsibility,” announced the suicide note in the pocket of the school’s principal, and the Prime Minister said it too when he resigned over the matter, but they meant it in a more traditional East Asian fall-on-your-sword kind of way, while the families want to know who actually caused the disaster. But no one group of people, let alone one individual, could have brought about the fate of the Sewol themselves, and given that, I can almost understand the South Korean government’s tendency toward stonewalling and blame-deflecting circumlocution. Nobody thinks they did their job overseeing the cargo ferry industry, but could anyone in charge of running the country, even those most filled with shame by the incident, imagine that any decision of their own sank the ship?

Even those in charge of running the ship itself must see the blame as widely dispersed. Thoughts of disproportionate culpability no doubt haunt the surviving crew members directly involved in that fateful turn, but even they stand at the end of a long causal chain, one that may stretch all the way back to the early development of South Korea, the country that found a way to do the seemingly impossible: raise itself from the status of half a poor, ruined, and thoughtlessly divided remote peninsula to that of a modern economic powerhouse more first-world, in many ways, than much of the first world. 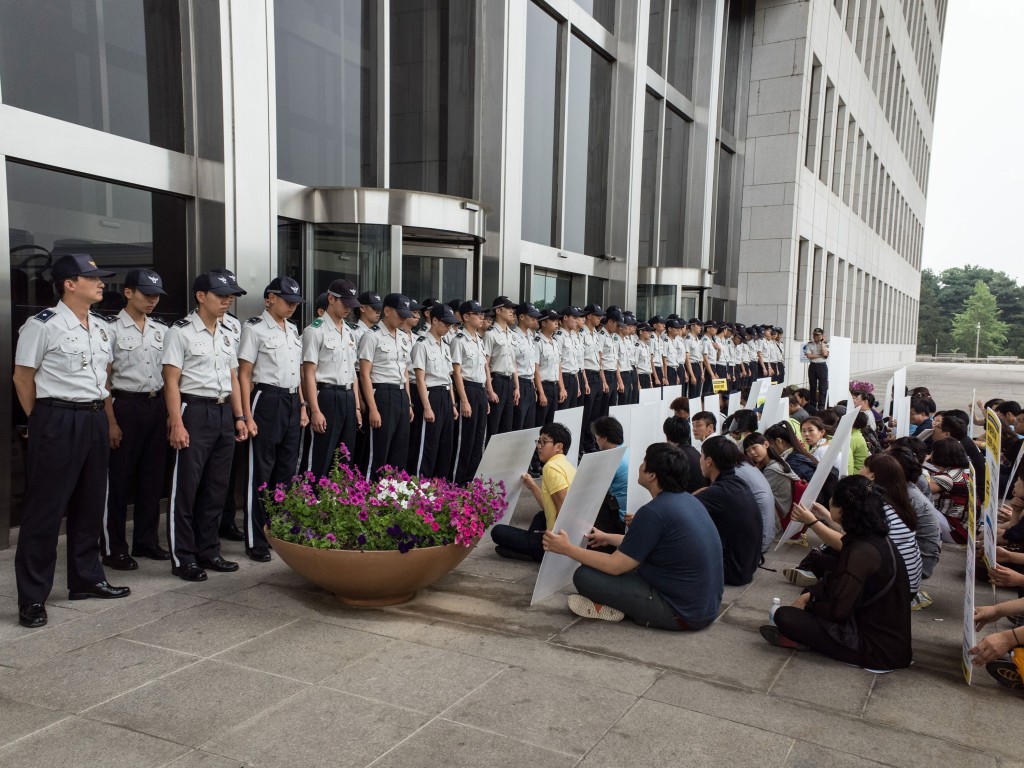 Yet the Sewol was a third-world accident, and not the first — not even the eighth, ninth, tenth — in South Korea’s short history. Cruel State opens with a title card listing off the dates and death tolls of the Sewol‘s precedents, and only those specifically involving ferries: as the country’s economy grew, so did its propensity to generate horrifying news stories of not just boats sinking but jetliners crashing, trains catching fire, bridges and buildings falling down. 1995’s Sampoong Department Store disaster, the most memorable example of that last category, took 502 lives in the deadliest building collapse since antiquity.

It also brought the first major wave of the reflection of which the Sewol has brought the latest, one that forces people to ask, Is this the price Korea must pay for its relentless — and, looking back now, reckless — drive to do ever more, ever faster, ignoring procedure, law, and threat to life and limb if it meant one more step up the economic ladder toward that prized distinction of “developed country”? And for all the pains Korea has taken, can it even consider itself a member of the developed world, where buildings don’t collapse and boats don’t sink due to sheer irresponsibility?

The documentary’s English title of Cruel State highlights the conflict between the Sewol parents and unresponsive Korean officialdom, but the point clarifies further with a direct translation of its Korean title: “Bad Country.” That echoes a sentiment you’ll hear from many Koreans who left their homeland before the 1990s, whose first-hand memories of their homeland, which vividly retain the simultaneous drabness and fierceness that once characterized the place, stop well short of the period after the country’s impressive recovery from the 1997 Asian financial crisis, when Korea looked like a shining city on the hill to the rest of Asia and, as time went on, to the wider world as well. But then came the Sewol, resuming the pattern of tragedies that have not only killed thousands but, in a sense, indicted the entire South Korean project.

The United States of America has an obvious equivalent in its increasingly frequent mass shootings. Cruel State made this especially clear to me, so closely does the Sewol parents’ struggle mirror, especially in its Sisyphean appearance, that of some parents of the elementary schoolers gunned down at Newtown, Connecticut’s Sandy Hook Elementary in 2012. Those parents have worked, needless to say, for stricter gun laws, a cause with which I can only agree, though I can’t be the only American who wonders whether his country long ago opened Pandora’s box.

America has more firearms, one often hears, than it does people. No plausible gun law, no matter how strict, could bring that ratio very far down in anything like the near future — and if one did, I fear it would only give a certain segment of America reason to believe, and react accordingly to the belief, that the president really is coming for its guns. And sometimes I wonder whether the National Rifle Association, the standard target for blame whenever an American shoots up a school, a theater, a church, a postal facility, or a government office, has it entirely wrong when they insist that guns don’t kill people, people kill people. 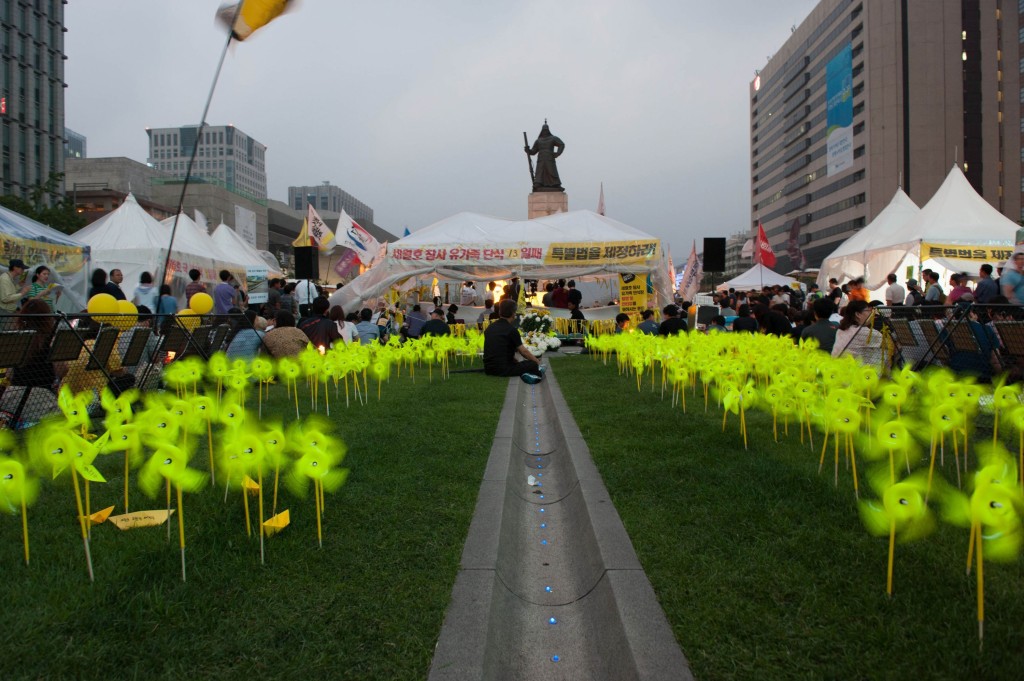 I can’t call myself one of Michael Moore’s biggest fans, but his documentary Bowling for Columbine put forth a question all too rarely asked: what if the guns aren’t the problem — what if we’re the problem? We regard America’s routine shootings and the guns used to execute them as the disease when they could just as well be the symptom, the natural consequences of a violent, introverted culture, just as the Sampoong, the Sewol, and all of South Korea’s other high-profile catastrophes may have come as the natural consequences of the unceasing pressure for higher and higher performance — deliver more cargo per run, do them faster, forget the safety training, just ship out — that pervades so much of life here. At this point, Americans and Koreans alike might well ask themselves if they simply live in, well, a bad country.

Still, Korea has shown that it learns more from failure than America does. Malcolm Gladwell took some flak when he framed Korean Air’s streak of crashes in the 1980s and 90s as a cultural problem addressed with a cultural solution, but something has kept their planes properly in the air (“nut rage” and the like notwithstanding) these past fifteen years. The citywide post-Sampoong investigation revealed that one in seven Seoul towers needed rebuilding, and none of them have collapsed since (though an auditorium at a Gyeongju resort did last year, killing ten). 2003’s badly mishandled Daegu subway fire resulted in 192 deaths, while 2014’s Busan subway fire resulted in none at all.

The Seoul subway also had a blessedly death-free incident last year, a collision on its busy Line 2 just weeks after the sinking of the Sewol. But many of the passengers involved, well aware that the students on the boat who survived were the students who disobeyed the order to stay in their cabins — evidence of a frightening gap between the reality of their country and the follow-the-leader mentality their country had instilled in them — pried open the doors and fled the moment the voice on the loudspeaker told them not to. “It’s unlikely South Koreans will ever again trust the voice on the intercom,” wrote novelist Kim Young-ha.

Each big shooting in America does spark a renewed debate, though, America being essentially an accretion of rules, always a legal debate, with one side arguing that more laws will prevent more such incidents, and the other arguing that more laws will not prevent more such incidents. (Nobody dares imagine the possibility a country whose people, irrespective of the laws they live under, don’t want to shoot each other in the first place.) This sort of thing may deepen America’s national resignation on both sides that the general phenomenon will only get worse, but in Korea, I can at least believe that a ferry will never again sink in the same manner as did the Sewol.

Still, the focused but inconclusive Cruel State, neither first movie about the disaster (Lee Sang-ho and Ahn Hae-ryong’s The Truth Shall Not Sink with Sewol/다이빙벨 came out last October) nor, surely, the last, recognizes the consequent psychological shift as lasting — a shift, at least, away from complacency rather than toward it. This portrait of agony brings to mind the words of Martial joylessly watching lions devour slaves at the Coliseum, words Alistair Cooke quoted on Letter from America when he faced the Columbine High School massacre, which in retrospect began a grim era: “These are my times, and I must know them.” 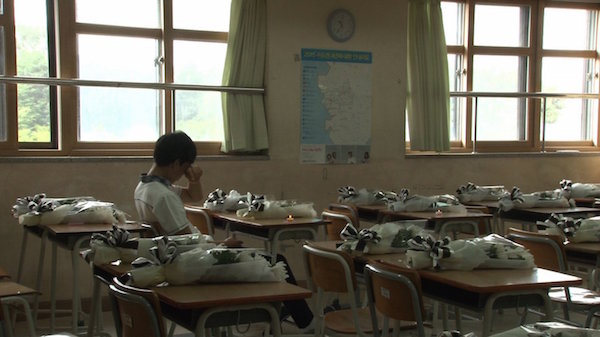