When we cinephiles of a certain age remember our discovery of film, we remember browsing video-store shelves in search of interesting movies to rent. But explaining the facts of that era in the face of disbelief from the young — You mean you couldn’t watch a movie someone else was watching? You had to pay “late fees”? — should keep us from looking back with excessive fondness. Not only did we have to contend with the contingencies of physical media, from unwound VHS tapes to scratched DVDs, we had to accept whatever our local video store happened to carry. Some of us could expand our cinematic horizons with trip to the nearest major city’s speciality rental shop, with its large and intensively curated stock organized by director, by movement, by country. But most of the time we had to make do with suburban chain stores, who broke down their Hollywood-dominated selection into crude genres like “action/adventure,” “drama,” “comedy,” — and, over in the back, “foreign.”

I’d like to say I discovered Korean cinema back then, but in fact it took another decade before I came upon the fateful cache of Korean Film Council releases in my university’s media library. Still, my near-random picks from the foreign section, usually from Japan or Hong Kong, got me used to two aspects of cinematically faithful home video, both of which bothered viewers across America at the time. The first was letterboxing, which fit a film’s entire rectangular frame within the then-square frame of television screens, causing some to insist that part of the image was actually hidden by “black bars.” The second was subtitling, which obviated the need to dub a film not originally shot in English into English, much to the consternation of those unwilling to “read a movie.” But not long thereafter, Ang Lee’s Crouching Tiger, Hidden Dragon proved that a subtitled movie could succeed in the United States, in not just its urban “art houses” but its anonymous multiplexes as well.

Or rather I’d thought it did, not least because I haven’t encountered a single English-dubbed film this century. Hence my surprise when I heard Korean filmmaker Bong Joon-ho poking fun at the non-movie-readers of America after accepting his Golden Globe Award for Best Foreign Language Film. He won it with Parasite, a suspenseful, funny, violent, and tightly crafted and tale of class warfare I wrote about here on the Korea Blog after it won the Palme d’Or last May. The audience at Cannes, whose last few big winners have come from Japan, Sweden, England, France, and Turkey, are presumably no strangers to subtitles. The same, perhaps, cannot be said of the audience at the Golden Globes, to whom Bong gave these words of advice: “Once you overcome the one-inch-tall barrier of subtitles, you will be introduced to so many more amazing films.” I admit to never having made a habit of overestimating the cultural acumen of my fellow Americans, but still I wondered: how many of us really had yet to step over that barrier?

After Parasite‘s victories at Cannes and the Golden Globes, smart money had it as the winner of the Academy Award for Best International Feature Film. That award just this year underwent a name change, which gets us into Hollywood history: “On January 11, 1927, over dinner at the Ambassador Hotel, in Los Angeles, Louis B. Mayer told a gaggle of thirty-six guests, all of them holding positions of power in Hollywood, that he proposed to form a new organization,” writes New Yorker film critic Anthony Lane. “Its title would be the International Academy of Motion Picture Arts and Sciences. Thus was the Academy born, although the word ‘International’ didn’t last long. It smacked of places other than America, so it had to go.” But “ninety-three years later, the word made a comeback, and what has been known, since 1956, as the Academy Award for Foreign Language Film was upgraded, or broadened, to the award for International Feature Film.”

Parasite duly won Best International Feature Film, Lane continues, “only to trump itself by going on to win Best Picture, period, thus breaching the wall between American and foreign products and, one could argue, instantly rendering the concept of the ‘International’ redundant.” Parasite‘s other Oscars, four in total, included Best Original Screenplay and Best Director for Bong, but it was the Best Picture win, the first ever for a non-English-language film, that made cinema history. As Lane puts it, “It took a director from South Korea, working in his own tongue, to give voice to universal fears.” Parasite‘s fully Korean script, setting, and cast marked a return home for Bong, who in his previous, Netflix-produced film Okja went for a balance between East and West. (Before that, he directed the mostly English-language Czech co-production Snowpiercer.) And not only did Bong make his latest picture in his own tongue, he accepted its awards in his own tongue as well.

In a recent essay for Variety, Bong’s English interpreter quotes a pertinent line from Okja: “Translations are sacred.” A student filmmaker who calls herself Sharon Choi, she began her film-world interpreting career with a week’s work for director Lee Chang-dong, who was then promoting his “snubbed masterpiece Burning.” Though born and mostly raised in Korea, Choi spent two years of her childhood in the United States, an experience she credits, somewhat dramatically, with turning her into “a strange hybrid — too Korean to be American, too American to be Korean, and not even Korean American.” But it placed her well to act as a linguistic and cultural go-between, a service whose extensive use by Bong has turned her into a familiar face in the English-speaking world. She adds of the director that “it helped that I was already familiar with his language as a filmmaker and a thinker, having written college papers about him.”

Choi’s description of her experience reminded me of another piece on linguistic and cultural translation by the New Yorker‘s Moeko Fujii. Its subject is Isle of Dogs, Wes Anderson’s 2018 animated tale of a retro-futuristic Japan. Accusations of “problematic” treatment of a foreign culture pelted its American director well before release day, but the Japan-born-and-raised Fujii sees the matter differently. Or rather, she hears it differently: “The Japanese characters started speaking, without subtitles, and suddenly, in a Loews in Lincoln Square, surrounded by a sea of Americans inhaling corgi-sized tubs of popcorn, I was hearing voices from home.” That these voices come without subtitles strikes Fujii as “a carefully considered artistic choice” in a film “profoundly interested in the humor and fallibility of translation.” When an American character speaks English, her Japanese listeners “understand her words, but respond in Japanese. The Japanese can speak and understand English but choose to speak in their native tongue.” At this climactic moment “the movie rejects the notion of universal legibility, placing the onus of interpretation solely upon the American audience.”

Though he uses interpreters like Choi, Bong also makes an certain linguistic demands on his audiences. Like many high-profile Koreans of his generation, his English is perfectly functional, and he surely has at his disposal the resources to attain full mastery of the language. But when he takes a stage he speaks Korean, even when accepting the highest honor the American motion-picture industry has to bestow. Or rather, he speaks Korean with the occasional swerve into English, such as his confession, after winning all those Oscars, of being “ready to drink tonight until next morning.” More revealing was his acknowledgment, onstage in Los Angeles at the Dolby Theatre, of his debt of gratitude to “our great Martin Scorsese” (that “our” being a characteristically Korean addition). Bong’s switch to English signaled a desire to speak directly to Scorsese, who sat not far away in the audience, using his seonbae‘s native language.

The title seonbae, used to address higher-ranking colleagues, tends to come out when Bong talks about older filmmakers regardless of nationality. He uses a different term for those closer to him: “Quentin hyeong,” for example, which casts the slightly older Quentin Tarantino in the role of a big brother. “I love you, Quentin!” Bong also exclaimed in English, lest anyone in the audience underestimate his affection for the auteur of Pulp Fiction, an omnivorous cinephile who names Bong’s work among his favored films each year. Scorsese, too, has advocated for not just Bong but Korean film in general, which he’s described as “one of the great national cinematic flowerings” in recent years. (He’s also championed Hong Sangsoo, an Éric Rohmer to Bong’s Steven Spielberg and one of my own favorite filmmakers. I recall Hong, a less expansive speaker than Bong in any language, introducing one of his movies at the Los Angeles County Museum of Art, in full, as follows: “This film is very long. I hope you find something good in it.”)

One might think it only natural for a Korean filmmaker, winning awards for a Korean film, to give his acceptance speeches in Korean. But like the jokes geared toward Korean-English bilinguals in Okja, Bong’s choice to speak his native language at the Oscars and elsewhere sends a pointed message to not just Westerners but his fellow Koreans as well. If non-Korean-speakers wondered what nuances they were missing in Bong’s film due to their subtitle dependence, their curiosity surely grew as they waited for Choi to interpret the words Bong spoke in person. Sacred or not, translation only gets you so deep: without knowledge of the original language, you’ll never “feel it on your skin,” to borrow a Korean expression. And how salutary for South Korea — a country that has long unquestioningly accepted the “minor” status of its own language and plowed untold sums into a truly parasitical English industry — to hear Korean spoken without shame or even hesitation at one of the central events of American popular culture. What if Westerners respect you more for speaking Korean than English?

Not every viewer appreciated Bong’s victory. “These people are the destruction of America,” tweeted one commentator, referring to “those in Hollywood awarding a foreign film that stokes flames of class warfare.” And perhaps giving Best Picture to a movie that has nothing to do with the United States doesn’t say much for the health of American cinema, now bloated by the kind of generic franchise blockbusters Scorsese has drawn ire by publicly scorning. Part of me would have preferred these honors go to Burning, but as a cinephile I welcome any and all foreign films into direct competition on American territory. As a traveler I would, by the same token, welcome foreign airlines into direct competition with America’s complacent domestic carriers. But if only one form of American complacency can be dislodged at a time, let it first be the linguistic kind. He who won’t read subtitles culturally impoverishes himself, but he who makes no attempt to understand foreign languages isn’t much richer. Bong tells us that in several ways — one of them, as podcaster Anna Khachiyan puts it, “pulling that Houellebecq power move and pretending to not speak basic English to troll the Americans.” 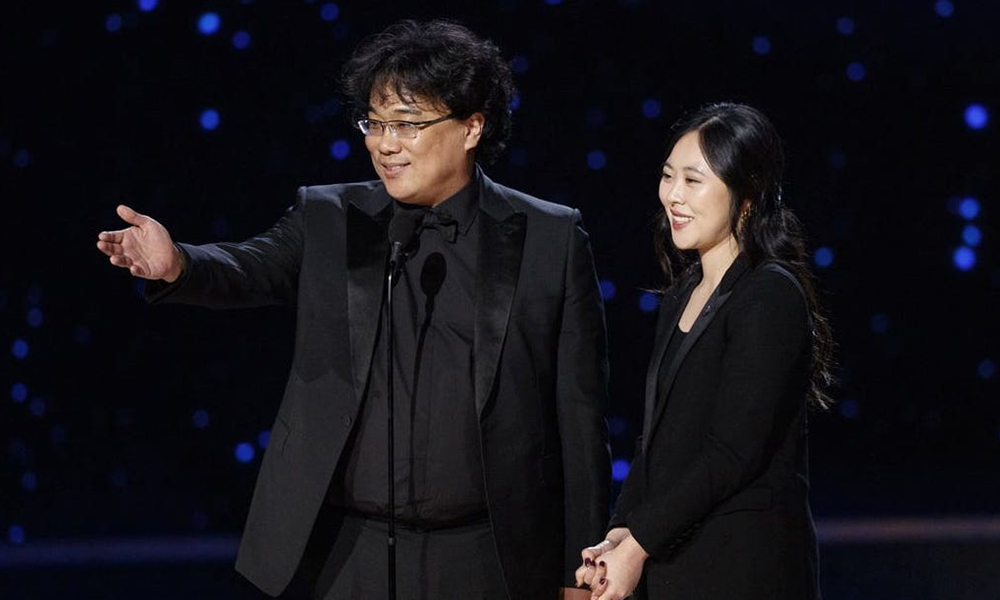