A whole new line on the KTX, South Korea’s high-speed train system, opened just last December. It connects Seoul to Gangneung, a modest coastal city on the opposite side of the county, reducing a trip that formerly took more than six hours to what now takes less than two — an hour and 55 or so minutes, to be more precise, and one can only imagine the pressure on the engineering team to get the trip time down to the more marketable side of two hours. Still, it couldn’t have been as intense as the pressure to get the line up and running before the Winter Olympics, many of whose events take place in the place where it terminates, and without the presence of which it probably wouldn’t have been built at all.

The name Gangneung might sound unfamiliar even to Olympics fans. Didn’t the games go to a city called Pyeongchang? Many know that name, or some variation of it, because of the official pains taken to differentiate it from Pyeongyang, the capital of North Korea. (Hence some branding that renders it PyeongChang or Pyeong Chang.) And indeed, Pyeongchang does have a stop on the new KTX line, but that tiny mountain town makes Gangneung, which itself has fewer than 215,000 people, look like an urban colossus. Though competition venues have gone up all over Pyeongchang County, it’s Gangneung, the biggest city in the area, that can in some sense lay a more convincing claim to Olympic-capital status.

Always game to ride a fast train, new or old — their existence, after all, being one of the most compelling reasons to leave America — I recently caught a KTX out of Seoul and rode it all the way to Gangneung. Getting to Seoul Station that day involved making my way past hundreds of oldsters, almost all of them waving the flag of the Republic of Korea. The ones that weren’t held the Stars and Stripes instead, seemingly an even more meaningful symbol to Koreans of a certain age. Either way, they’d all come to demand the same thing: a boycott of the Olympics due to what they consider the illegitimate impeachment and replacement of Park Geun-hye, daughter of Park Chung-hee, the strongman under whose 18-year rule they’d seen the country grow prosperous enough to first host the Olympics under his successor in 1988.

I do wonder what those protestors, a dedicated subset of whom turn up in downtown Seoul to demonstrate their support of Park the younger each and every week, think about all the trouble the 2018 Olympics have had. Rumors of near-catastrophic financial problems and sluggish ticket sales have dogged the games for more than a year, but for hard-line Korean conservatives, which feeling dominates: schadenfreude for the organizers who impudently dared to go on with their work after the sacking of Madame President, or fear of that a slipshod, empty-seated Olympics would present the world with an image of an insufficiently prosperous, competent, and therefore respectable host country? Surely they take it as a mark in their favor that so many news outlets seem willing to blame the world’s reluctance to attend in full force on the malign specter of their hated North Korea, participate though that country has agreed to in the games themselves. Though located in Gangwon, technically South Korea’s northernmost province, Pyeongchang County actually lies about 20 miles farther from the North Korean border than does Seoul. Still, there’s geographical distance and there’s psychological distance, and the latter has also long made most of the east coast feel fairly, as many a United States military man stationed here might put it, BFE.

Despite a land area amounting only to about a quarter of California’s, South Korea feels big when you travel within it. Some of this has to do with how dramatically the development drops off outside of the cities, with little of the continuous suburban sprawl of the kind seen in America and even Japan. Rolling east, the KTX seemed mostly to pass over farmlands and frozen rivers. Some of it also has to do with regional accents, which remain strong enough that travel programs on television routinely subtitle them. The people of Gangwon don’t speak in an especially thick dialect, though I still had to concentrate harder than usual to make out the words of the driver whose shiny new cab I hailed outside the also shiny, also new Gangneung Station.

His taxi was one of a dozen lined up outside its doors, all awaiting the anticipated influx of foreigners, each one equipped with a digital vacancy sign in both Korean and English (a touch I’ve never even seen in the capital) and a monitor endlessly screening video clips extolling the glories of Pyeongchang County’s new Olympic developments — up to and including the Gangneung Curling Centre — and experience-rich cultural heritage sites. Here one Westerner tries a spoonful of bubbling red stew and beams with satisfaction; here another puts on a traditional Korean dress, gazing down at her own form with a hard-to-interpret expression of astonishment.

Few enough visible foreigners had yet shown up that I got the occasional hearty “Welcome!” from passers by — in English, which much of Korea seems to regard as the language of all non-Asians. I would have thought this year’s Olympics would make an ideal opportunity for the exposing, promoting, and teaching the Korean language, supposedly one of the proudest elements of the culture, but the high-profile efforts so far have mostly gone in the other direction, such as the preparation of English versions of the country’s most popular mapping apps and the installation of new and often awkward English signage, up to and including banners back in the capital saying, “Welcome to Seoul, Gate to Pyeongchang.” It hasn’t been solely an official effort: more and more Gangneung apartments have come available on Airbnb, their hosts all touting their proximity to either the Olympic venues as best they can. But in town quite a few urban attractions remain under construction, the work rushing to completion alongside hundreds of stingrays drying on racks just as they’ve done for countless generations. All over one sees the hopes for the games manifest in the various forms of official mascots Soohorang the tiger and Bandabi the bear, which start appearing not just right outside the train station (with its own shop full of Pyeongchang 2018 merchandise) but on the train itself, pinned to the lapels of the conductors’ uniforms.

The Olympics may change Korea’s relationship to Gangneung, but the KTX connection will surely change it more. A place’s distance from Seoul has historically been a measure of its irrelevance, but Gangneung’s seaside remoteness has actually served it well in past centuries, establishing it as a getaway for the yangban, old Korea’s class of aristocratic scholars, when they felt like doing even less productive work than usual. Over the last decade or so it has quietly incubated a cultural scene all its own, especially in and around the mural-lined streets of Myeongju-dong, a neighborhood formerly home to Gangneung’s city hall and which had to reinvent itself when it city hall relocated.

As in many a small town, most of Gangneung’s streets — even in the likes of Myeongju-dong — close up at a time that can feel unreasonably early. But when they’re open, local institutions of quite recent vintage, such as the brewery turned purveyor of convincing Western cuisine (pizza, clam chowder, beef bourguignon) that plays 1990s hip-hop out by the fire pit and the mill turned cultural center of a new-wave coffee shop run by a few escapees from the film industry, make a convincing case by their very existence that Gangneung has already achieved a measure of cool. It also, though by no deliberate effort of its own, possesses a level of air quality much closer to decency than Seoul’s this time of year — all the more reason to celebrate its entrance into the realm of the reasonable day trip, though best to wait to take one until after all this Olympic business dies down. 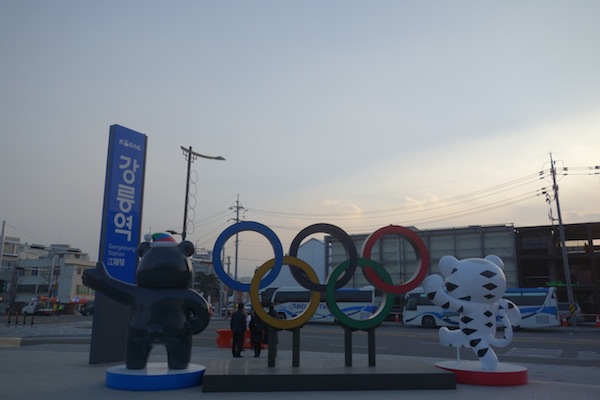