Despite having dominated the Pyongyang skyline for three decades now, the Ryugyong Hotel has never opened for business. Topped out as the end of the Soviet Union plunged North Korea into economic crisis, the building stood for most of that period as an angularly mountainous 105-story concrete husk. With a motionless crane still perched on its peak, the seemingly abandoned hotel offered Western observers rather too convenient a symbol for the North Korean project as a whole: ostentatious, even menacing, but all too clearly struggling and ultimately doomed to catastrophic failure. Yet in the late 2000s the project finally resumed, taken over by an Egyptian construction firm, and soon thereafter the Ryugyong was at least decently covered in glass. In recent years that façade has been fitted with LEDs, which at night enable it to screen vivid nationalistic imagery and slogans at a colossal scale (if in an awkward shape).

Where once North Korean officialdom seemed to expect citizens to ignore the Ryugyong, now it presumably expects the opposite. But even as nothing more than a propagandistic billboard, it would have been a glaring admission had it not appeared in Hotels of Pyongyang, a new photo book by James Scullin and Nicole Reed. Having yet to admit its first guest, the Ryugyong is shown only from the outside and at a distance, much less intimately than the ten other institutions of hospitality included here, most of them built in what contributing historian of socialist architecture Jelena Prokopljević calls “the golden decades of North Korean construction over the 1980s and 1990s.” To Westerners they’ll look considerably older, and surreally well-maintained at that, but “visitors from the former Communist Bloc,” adds North Korea scholar Leonid Petrov in his own short essay, “are amused by similitudes and feel very much at home.” 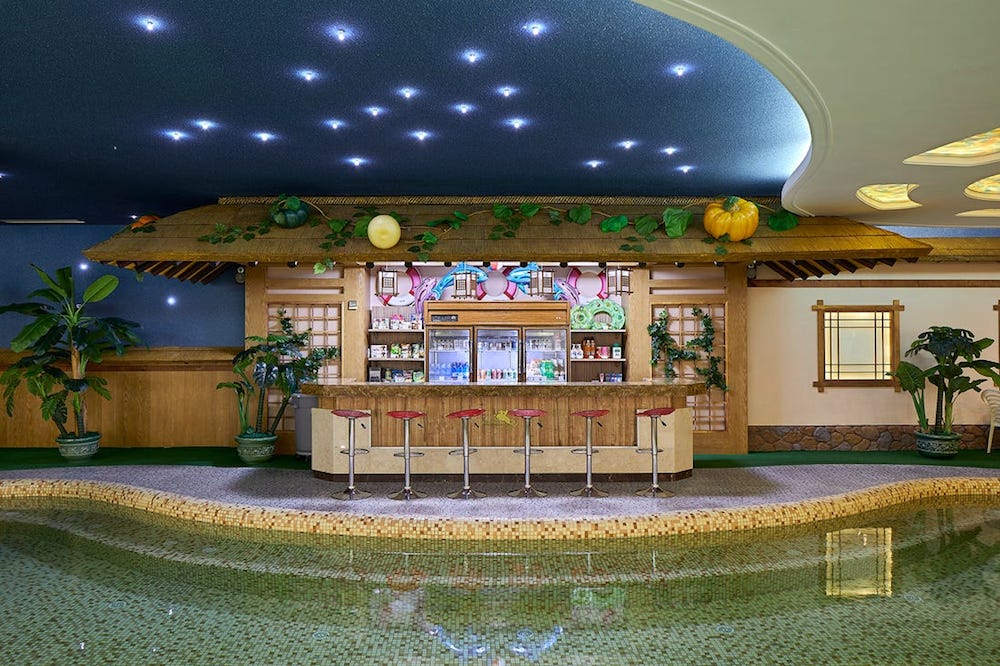 Whatever the origins of the beholder, it isn’t hard to understand the fascination of these hotels. Reed, an Australian photographer experienced in the urban environments of Japan and Hong Kong, captures views of interiors for the most part free of human beings, all the better to highlight the distinctive elements of their décor. Often these include ersatz plant life, faux-Roman columns, approximate-looking leather upholstery, clashing geometric patterns, mirrored surfaces (or surfaces kept buffed to such a shine that they might as well be mirrored), elaborate antimacassars, and large-scale paintings of glorified North Korean landscapes and cityscapes. Numerous inexpensive forms of multicolored lighting introduce even more variety into color schemes not just heavy on grays and browns, as one would expect, but also greens and pinks similar to those that coat the exteriors of Pyongyang’s many humbler buildings.

These interior designs also display a noticeable penchant for semicircular lounge chairs and bar stools, the sight of which reminds me of the seating in an equally striking hotel on the other side of the world: John Portman’s Westin Bonaventure in Los Angeles. Despite being relatively familiar to Westerners through its more than forty years of occasional but conspicuous appearances in movies, the Bonaventure retains the power to astonish, or at least to startle and bewilder. Though humbled by the Bunker Hill high-rises that have come to surround it, its quintet of cylindrical class towers still constitutes one of downtown’s few architectural icons. But the real achievement is its multi-level atrium lobby, Portman’s architectural signature and one that today may impress exceptionally well-traveled guests as a veritably North Korean combination of undeniable spatial ambition and datedness thorough enough to feel like time travel.

The day I first wandered inside the Bonaventure and beheld its atrium lobby — but didn’t even get up to its revolving lounge, a standard feature in both North Korean and Portmanian luxury-hotel design — remains one of the most memorable of my time in Los Angeles. For a first-time visitor to Pyongyang, checking into one’s lodgings surely has a comparable effect: from the surroundings one receives immediate, overwhelming confirmation that one has well and truly arrived somewhere else. One does not quote feel this in most other destinations, no matter how remote. “Hotels of Pyongyang are relics of a bygone era,” writes Petrov, “frozen in time and not touched by globalization.” In other words, they’ve held off the encroachment of what Kyle Chayka at The Verge labels “AirSpace,” with its homogenous international good taste: “Minimalist furniture. Craft beer and avocado toast. Reclaimed wood. Industrial lighting. Cortados. Fast internet.”

Though the hotels of Pyongyang appear in most respects to be the polar opposite of AirSpace, some do boast modest equivalents of its millennial comforts. The Koryo and Yanggakdo hotels have their own microbreweries, Scullin informs us, and the Pyongyang Hotel lays claim to the city city’s best coffee: “Unlike other hotels that serve the powdered variety, the Pyongyang Hotel Coffee Shop uses actual ground beans with an espresso machine.” (Unimpressive though that may sound, it shows what strides North Korean coffee culture has made since Simon Winchester visited. Having ordered a cappuccino at Pyongyang International Airport’s café, he received a cup of coffee whose foam “turned out to be egg white, beaten and cooked into a sort of greyish omelet.”) But as is by now well known, travelers in the Democratic People’s Republic of Korea can’t expect to access the internet, let alone fast internet. 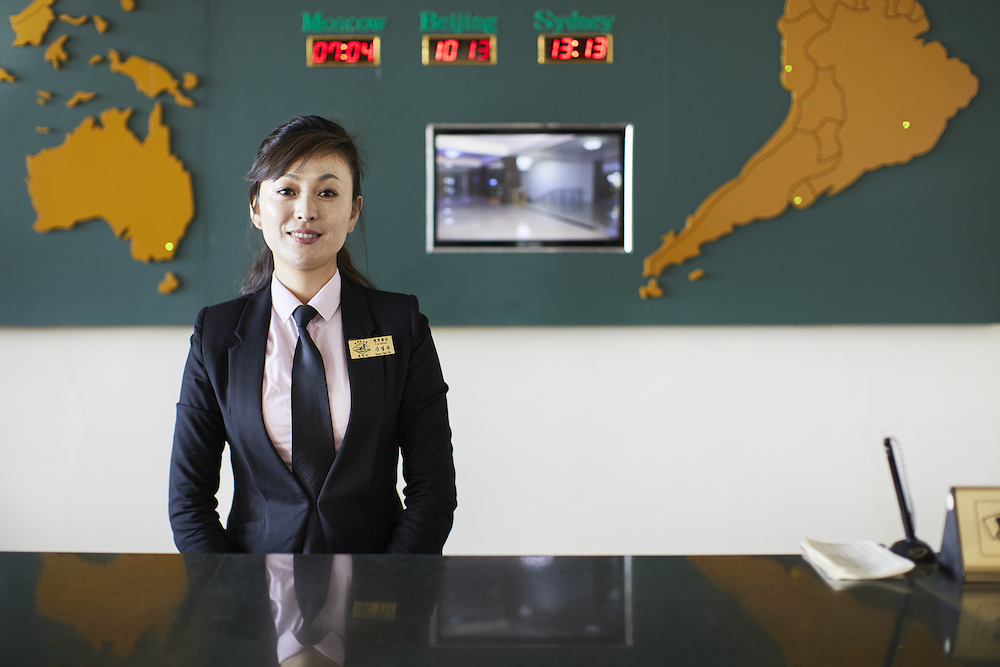 “A near-total lack of mobile phone service or internet has a unique bonding effect,” writes another contributor to the book named Charles Kennedy. “In any other country, at the end of a hard day’s touring important sites, a typical group would scatter to their rooms, uploading images to social media and answering work emails.” In North Korea, however, “the entire group will migrate en masse to the bar or restaurant, uninterrupted by phones buzzing in pockets or on tables. The quality of the conversation is elevated, friendships for life are kindled.” This aspect of the travel experience on offer north of the border is, I admit, not entirely unappealing; the deeper we get into the 21st century, the more often I catch myself fantasizing about life in a time before constant connectivity,  usually the era broadly reflected by the look and feel of Pyongyang’s grand hotels.

As the “Aviation Ambassador and DPRK Tour Leader” at Juche Travel Services, a company named after North Korea’s putative ideology of self-reliance,  Kennedy has a professional incentive to put a positive spin on the unusual conditions that obtain there. So, for that matter, does Scullin, who’s also described as a “DPRK Tour Leader” and who early on clarifies that “Hotels of Pyongyang does not attempt to offer a complete account of DPRK life.” Notably unseen in any of its photographs are the standard portraits of Kim Il Sung and Kim Jong Il, the country’s first and second presidents, that — as few foreign observers fail to mention — hang by law in all homes and many public places. Whether the result of an artistic choice, an official restriction, or a simple absence, it will surprise anyone who’s done a bit of reading about North Korea before.

This is to say nothing about what else goes unseen in these images of (by the relevant standards) well-appointed, internationally oriented hotels in the troubled country’s showcase capital. Scullin’s disclaimer will hardly satisfy those who see moral bankruptcy in any depiction of North Korea made without reference to the daily suffering of millions allegedly going on just behind the scenes, let alone the encouragement of tourism, which they they regard as the cash cow of a repressive, even murderous regime. Conducted in collaboration with Juche Travel Surfaces and the domestic Korean International Travel Company — indeed impossible without such collaboration, in a country so long concerned with restricting access to itself — a project like Hotels of Pyongyang, necessarily keeps on the kid gloves. Hence the emphasis on the Yanggakdo Hotel’s microbrewery rather than, say, its onetime accommodation of the ill-fated American college student Otto Warmbier. 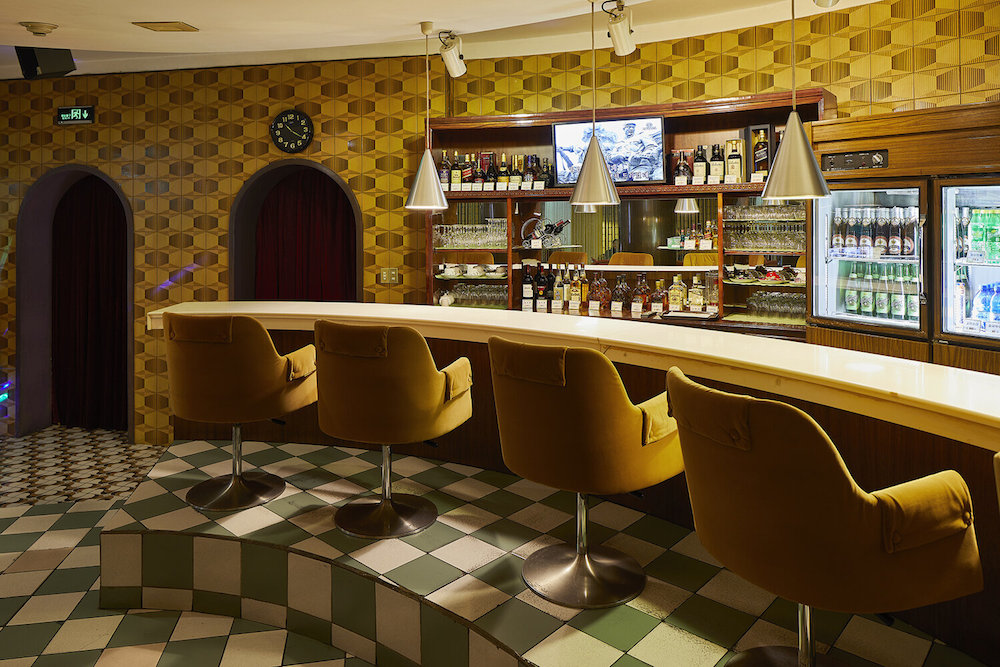 Living in South Korea, my own fascination with the land north of the border has drifted less toward moral outrage than apathy. That said, I know full well that seeing any one of the spaces depicted in this book for myself would render me delirious with excitement. Despite never having set foot in the DPRK, I’ve had similar spatial-cultural-aesthetic experiences elsewhere: not just at the Bonaventure, but at the decades-old and little-altered hotels, shopping centers, restaurants, bars, and coffee shops found all over northeast Asia. That includes certain spots here in South Korea, the country today held up as North Korea’s economic and political counterexample. But on the surface, the two societies once bore a much closer mutual resemblance — and well within living memory, as anyone who follows Hotels of Pyongyang with a South Korean film from the early 1990s (or a visit to a love motel) will notice.

Embarrassing associations with their own poorer, kitschier past must count among the many reasons for the relative lack of South Korean interest in North Korean aesthetics. (Here, the faces of the hotel employees who pose for Reed’s camera would all bespeak rural origins.) But the recent trend among young Seoulites to view old things more charitably has gone hand-in-hand with a willingness to enjoy certain symbols of DPRK culture: the Pyongyang Pub attempted to capitalize on that emerging taste, though last I saw the place it been remodeled with a domestic retro theme. South Koreans couldn’t visit the real Pyongyang if they wanted to, of course, which was true even before the coronavirus curtailed all international travel. Characteristically, North Korea has implemented even stricter entry restrictions than before, with the result that the hotels of Pyongyang must now be as empty as Hotels of Pyongyang makes them look.

Notes on the Camp of the Pyongyang Pub, Where Seoulites Eat and Drink Like It’s North of the 38th Parallel

A Python Goes to Pyongyang (and Well Beyond): Michael Palin in North Korea