I once asked a former foreign correspondent in South Korea what he wrote about. “North Korea, North Korea, North Korea, and North Korea,” he said. “Oh, and some North Korea as well.” But he’d done that work, for the Economist, something like a decade ago, when the Korea he actually lived in commanded much less international attention than it does today. I naturally assumed, when moving to Seoul a bit over two years ago, that some semblance of a balance had since been struck between media focus on the North and media focus on the South. Events of recent years, including but not limited to the ejection of a president, have indeed put this country in the international headlines, but more of them have stoked the world’s persistently greater fascination with the other one.

That kind of attention has, at least, added to the list of subjects, most of them already threadbare, that reliably generate stories in South Korea: pop music, academic competitiveness, suicide, Samsung. Now we have the “Why aren’t South Koreans obsessed with North Korea?” piece, which usually reflects little more than Westerners’ own obsession with North Korea. I once asked a longtime American resident of South Korea for his thoughts on why so many expatriates here develop such bad attitudes, and he chalked it up to the universal tendency of expatriates everywhere to take on certain characteristics of their host population, in this case habitual complaining. Something similar seems to have happened to me, not in terms of an acquisition of the grumbling instinct but the loss of interest in — bordering on the loss of awareness of — North Korea.

It wasn’t always this way. I remember indulging a mild North Korea obsession of my own in college, scouring the internet for then-scarce photos of the streets of Pyongyang, with its nearly carless streets, blank-faced citizens, and stern traffic ladies, when I’d meant to study for finals. (Some of those procrastinated-on exams were for political science classes, I reminded myself by way of justification, though the professors didn’t then consider the Democratic People’s Republic of Korea anything more than a curiosity.) Something about the combination of orderly poverty, exotically bland aesthetics, ever-present ideological charge, and hilariously obsolete technology took me back to the Cold War. Or rather, since the Cold War ended quite early in my academic career (though world maps with the USSR hung in the classrooms I sat in for years thereafter), it took be back to a certain idea of the Cold War.

Watching the 1980s Hollywood depictions of encounters between Russians and Americans, I couldn’t help but admire the steely, determined austerity they granted the former, even though the rough-and-ready informality of the latter had a way of saving the day every time. I think of J.M Coetzee’s time growing up in post-World War II South Africa, as he recounted it in the third person in Boyhood: “He chose the Russians in 1947 when everyone else was choosing the Americans.” But soon “came the realization, from the disapproval of his parents, from the puzzlement of his friends, from what they reported when they told their own parents about him: liking the Russians was not part of a game, it was not allowed.”

A similarly sneaking respect for North Korea exists here and there among South Koreans as well, driven by the perception that the North, far from submitting utterly to the United States like the South, made the more morally pure choice to “go its own way.” The fact Kim Il-sung took his orders from Moscow on day one doesn’t make a dent in the underlying sentiment. The very existence of that sentiment sometimes surprises Westerners, including many who would describe themselves as interested in the situation, as does evidence contradicting the widespread perception of North and South Korea as bitter enemies just who would promptly commence tearing one another apart were the U.S. military to pull out of the region, or that the North Koreans, in their heart of hearts, long for the day they can swarm into Seoul and take advantage of its unlimited freedom to shop.

That last notion brings to mind the Cold War figure, once so often invoked, of the downtrodden Soviet citizen dreaming of bluejeans and rock music in their bleak tower-block home on the wrong side of the Iron Curtain. Some Soviet citizens did exactly that, of course, just as a certain percentage of the North Korean population — estimates, of course, vary — avidly watch South Korean and even Western movies and television shows on smuggled-in USB drives. But observers draw close parallels between those two political entities at their peril. The Soviet Union died of many causes, not least boredom: its societies couldn’t provide their people avenues to material wealth, but more importantly, they also stopped providing them a reason to live. North Korea, with its us-against-the world program of military-first ethnic nationalism, at least hasn’t had that problem yet.

Not that it doesn’t have plenty of other problems, all of which outsiders tend to frame in maximally self-serving terms. North Korea’s notionally communist economy (ever more displaced over time by what none in its elite have dared call capitalism) and infamous penchant for long-term mass imprisonment allows self-described critics of of the regime, no matter their lack of either direct or indirect involvement in bringing it down, to see themselves as 20th-century-style freedom fighters, describing North Korea in Solzhenitsynian terms, if not making comparisons to Nazi Germany. The post-USSR need to see at least one country as an inscrutable enemy dead set against all for which the liberal democratic West stands competes with the need to see at least one country attempting to exempt itself from the America-dominated global order, no matter how shabbily.

A North Korea analyst once told me that the list of positive things he could say about that country includes its refusal to use an English word when they’ve already got a perfectly good one in Korean. As a foreigner who counts the Korean language among his main points of interest (or even as his main point of interest) here, I can well understand the appeal of that practice. But it also hints at a refusal to Westernize uncritically, a haphazard and often cringe-inducing process one sees underway in the South each and every day. Though North Korea admittedly takes its opposition too far, it somehow still manages to offer such luxuries as decent local beer, unknown until very recently in the South (as famously pointed out to the public by that same Economist correspondent), and legal marijuana, unknown until very recently even in America.

Even so, I find getting interested in North Korea more of a struggle all the time. Another report on the latest missile test; another sleazy defector memoir (and the inevitable scandal over its exaggerations); another slew of now-common Pyongyang street photos, another warning from one remote pundit that North Korea’s imminent destruction of Seoul or Seattle or Hawaii or wherever; another assurance that all it wants is to become a smaller version of China: for a time, the churn seemed potentially eternal. A brief reprieve came last month in the form of the 2018 inter-Korean summit, which most of the foreign correspondents in this country no doubt had to drop everything to cover.

I, uncharacteristically, happened watched the entire broadcast of Moon Jae-in’s Friday-afternoon meeting with Kim Jong-un, playing as it was on the television at the front of my bus heading down to the southern town of Jeonju for the weekend. Their surprise steps onto the northern side of the border, their neatly choreographed stroll around Panmunjom and their chat at what looked like a picnic table, the introductions of their wives wives and subsequent toasts: all of it proved more compelling that I expected. Though some of the provisions in the resulting Panmunjom Declaration for Peace, Prosperity and Unification of the Korean Peninsula came as a surprise, especially the one about reconnecting the two old railway lines that used to connect the halves of the peninsula, I couldn’t help but contemplate the predictable lines along which the reactions would break down.

Certain news organizations, both national and international, would seize upon the chance to bear witness to an ostensibly historic moment; others would seize upon the chance to emphasize how little of political substance had really happened. Many of the middle-aged and younger would find themselves moved, some to tears, at the sight of Moon and Kim warmly greeting one another; the South Korean president’s harshest critics, usually of an older generation, would take it as proof positive of his being the “commie” they’ve long called him. Some of the temptingly cynical responses, expressed with particular force by South Korea’s Westerners and more deracinated natives, would emphasize the minor difference between peace de facto and peace de jure, as well as the fruitlessness of previous meetings between previous leaders of the North and South.

Whatever the practical consequences of the summit, who can ignore the attention it has received? Even Jeonju, a small city best known for its tourist-friendly cluster of traditional houses, had celebratory banners, complete with photographs of the meeting, printed and hung the very next day. Specially produced commemorative videos have since been played over and over on the many screens of Seoul, lest we forget about the monumental event. Yes, all this is media attention paid to a spectacle orchestrated to receive media attention, and yes, on our vast, saturated 21st-century media landscape has thoroughly debased such spectacles, but on some level they also seem like all we have. And in the nature of spectacles, a big one leads to a bigger one: specifically, in this case, Donald Trump’s own meeting with Kim, just announced for June 12 in Singapore. You hardly need an interest in North Korea to want a look at that. 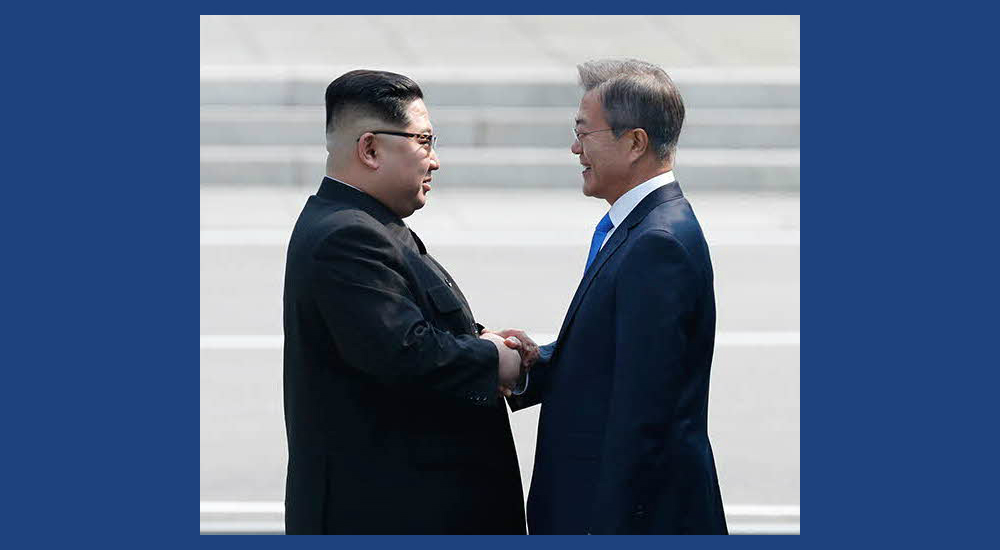