A few weeks ago I watched Monty Python’s Michael Palin toss an inflatable globe to a classroom full of North Korean schoolchildren. The sight took my mind back across the Pacific Ocean and more than a quarter-century in time, from my current home in Seoul to the childhood home in California where I first saw that same inflatable globe — or one very much like it, anyway — on Around the World in 80 Days, the series that made Palin, already long famous as a Python, a beloved television traveler as well. I’ve watched each and every one of what are now called the Palin’s Travels shows since, following along as the onetime dead-parrot salesman went from the North Pole to the South, circled the Pacific Rim, crossed the Sahara and the Himalayas both, and made his way through a great deal of the rest of the world as well.

The announcement earlier this year that Palin’s latest journey would take him into North Korea thus struck me as the logical extension of the enterprise. Any fan could sense that Palin has wanted to enter that most secretive of all countries at least since 1997’s Full Circle, whose Pacific Rim-tracing itinerary naturally included South Korea. Here he found, as he writes in the series’ companion book, a country tirelessly at work “making itself bigger,” channeling its historical resentment into an “intense commercial competitiveness” and an “almost manic drive to modernize in the international way.” Its sense of national destiny, it seemed to him, “transcends individual aspirations. Things like privacy, holidays and time off, which we value so much in the West, are considered luxuries, always ready to be sacrificed to the national effort.”

Palin’s travels took him through this country many years before I arrived, but his observations of the developmentalist South Korea in the mid-1990s, just before the Asian financial crisis took the wind out of its sails, jibes with other accounts of that time. Now, though, the bit about all the sacrifices for the national effort sounds more like a description of North Korea, which at that time Palin and his crew could barely even see over the border, let alone enter and shoot a documentary. “North Korea is not really interested in seeing you, especially if you’re from the West and carrying a film camera,” he writes in the book of his first serious obstacle to progress around the Pacific Rim. “Global glasnost has barely dented the protective shell of one of the last remaining communist dictatorships and the closest we can get to it is the Demilitarized Zone, the DMZ, which has separated the two countries since the end of the Korean War in 1953.” The Full Circle footage of Palin’s visit to the DMZ appears again in Michael Palin in North Korea when Palin re-enters its famous blue conference room, 22 years later, from the other side. At that point he has already spent more than a week in the North Korea, riding the Pyongyang metro, looking up at towering statues of Supreme Leaders Kim Il-Sung and Kim Jong-Il, taking in the view from the top of Juche Tower, firing off a few rounds at a shooting gallery, receiving a vigorous scalp massage at the Changgwang Health Complex, making his classroom visit, beholding the rigors of North Korean ping-pong, having coffee beside Kim Il-Sung square (empty on one of the days without a military parade), visiting the studio of a noted propaganda-poster artist, having his first Korean barbecue dinner of any kind, and joining in the festivities at a vast and increasingly drunken May Day picnic.

In other words, Palin has been doing in North Korea the kind of participatory cultural engagement that has endeared him to so many viewers, and so many of his hosts across the world, for nearly 30 years now. An inveterate rail traveler, he first enters Pyongyang on a train from Bejing, and along the way says that, although he understands the degree of control exerted by North Korean officials on every traveler in the country, he hopes “that we’ll get beyond that and actually get to know, or meet or just observe the people themselves, the North Koreans who live and work and play there and bring up their children there and go to school there.” If he can “get beyond the politics,” he says, he wants to find “that the people who there this see us as as fellow human beings. Because that’s the point of going and traveling around the world. It’s to see that people, actually, are much closer to us than we think.”

In both his acting and his traveling, Palin has got no small mileage out of his public persona, an classically English type that combines high affability, deep-seated inhibition, and a desperation not to offend, all of which goes with the delicacy required for a project like this. “Everywhere we go, we’re accompanied by an entourage of about five or six men and women in suits who watch our every move and check everything we’re seeing and everything we’re doing and everything we’re saying,” he says in his Pyongyang hotel room a few days into the trip. “But you know, they do things completely differently here. That’s the way it is. We can’t just come blundering in and say, ‘We’re from the West. We want to see this, We want to see that.’ If you’re going to learn anything at all about this country, you’ve got to prise the door open very, very gently. We need to keep their trust, and it’s a slow process, but if we step out of line and shoot things we shouldn’t shoot, the door will be slammed shut.”

Treating North Korea like a high-strung animal, spooked at the slightest unexpected action, might seem like it would make for a dull travelogue. But Palin does demonstrate a sense of when and how far to push, as well as whom to push: usually one particular government-assigned minders, a woman in her twenties named Soo-young. “At school, of course, we learn what they have done,” she tells him as they stand before the enormous concrete Kims (in Palin’s oddly hilarious description, “the biggest leaders I’ve ever seen”). “But we all have got our own outlook on the world. And so it’s not like, what you call, you know, brainwashing? We learn from our hearts that they have done really great things to all Korean people” — a common prepositional misuse in Korean English, if surprising to hear from someone specifically assigned to represent North Korea on international television, but a telling one nonetheless. Later, on an excursion deep in the North Korean countryside, Palin asks Soo-young what the state media tells her about the British. Her evasive answers force him to get slightly more direct, asking for her presumably negative thoughts on Britain’s, and by extension the West’s, freedom to criticize its own leaders. “Our leaders are very great,” Soo-young explains, seeming to switch into a different mode, “and the leaders are not individual. They represent us, the masses, so we cannot criticize ourselves, can we? Criticizing our leaders is like offending — criticizing ourselves too.” Her delivery betrays little about to what extent or even whether she believes this line of reasoning herself, but Palin, sensing the nervous critter that is North Korea about to bolt, goes into a half-apologetic ramble about how “your leaders, if I may respectfully say, are very different, and I absolutely respect the respect that you have for your leaders,” the kind of circumlocution that wouldn’t sound out of place in a Python sketch.

“Oh, it’s so difficult whenever you get onto any subject concerning the leadership,” Palin says in his subsequent hotel-room monologue. “I mean, they just stop. I think it’s just a very, very difficult thing for them to talk about because you don’t talk about the leaders. As soon as you talk about them, you demean them in some way.” It brings to mind the hand-wringing many a Westerner did a decade or so about whether or not Muhammad can be depicted, but Palin has a convenient way to smooth things over: the Fish-Slapping Dance that he and John Cleese originally performed in 1971, saved, luckily in a land where Youtube access is vanishingly hard to come by, as a clip on his laptop. “So is this a live fish or a dead fish?” asks Soo-yeon, giggling her way out of her line-toeing official demeanor, if only for a moment.

Palin pulls up the Fish-Slapping Dance during a prolonged stretch of dead time at remote airport, newly built and fully staffed but otherwise empty. There they all await the plane that will take them to Mt. Paektu, which North Korea calls the birthplace of Kim Jong-Il. “Nothing has confounded my expectations of the DPRK as much as this gleaming new airport, and it seems to me it’s a statement of intent that the DPRK is going out into the world,” Palin says. “In order to fill this place they’ve got to have people from all over the world coming to the country, so it means the country itself will have to be seen by the rest of the world as the benign and welcoming hosts — rather than, you know, the possible bad boy.” Indeed, projecting the image of a legitimate country, not that of the menacing, indistinct “hermit kingdom” to which Palin couldn’t even dream of access in 1996, has clearly become a priority for North Korea at least since the ascent of Kim Jong-un, son of Kim Jong-il, in 2011.

If it weren’t a priority, Michael Palin in North Korea could never have happened in the first place. Productions like these only get made because North Korea allows them (or believes it can no longer afford not to allow them), a fact that, in the eyes of hardliners who see travel of any kind to North Korea as morally tantamount to handing money to a repressive and even murderous dictatorship, makes Palin a dupe. But the days of the old North Korea could be numbered; as Palin says, many North Korea-watchers believe “that free-market forces are slowly taking hold, as the old ideals of communism slip away. Maybe in five years’ time, the street will be full of McDonald’s and adverts for iPhones. If so, I’m glad to have seen it before it becomes like everywhere else.” Ever since Around the World in 80 Days, the travel industry has credited Palin’s programs with tourism booms in each place they have have showcased, no matter how remote. How long before Pyongyang similarly becomes the victim of the “Palin effect,” and its beneficiary?

An English Ceramicist in Korea: a BBC Radio Journey of Bumbling and Discovery 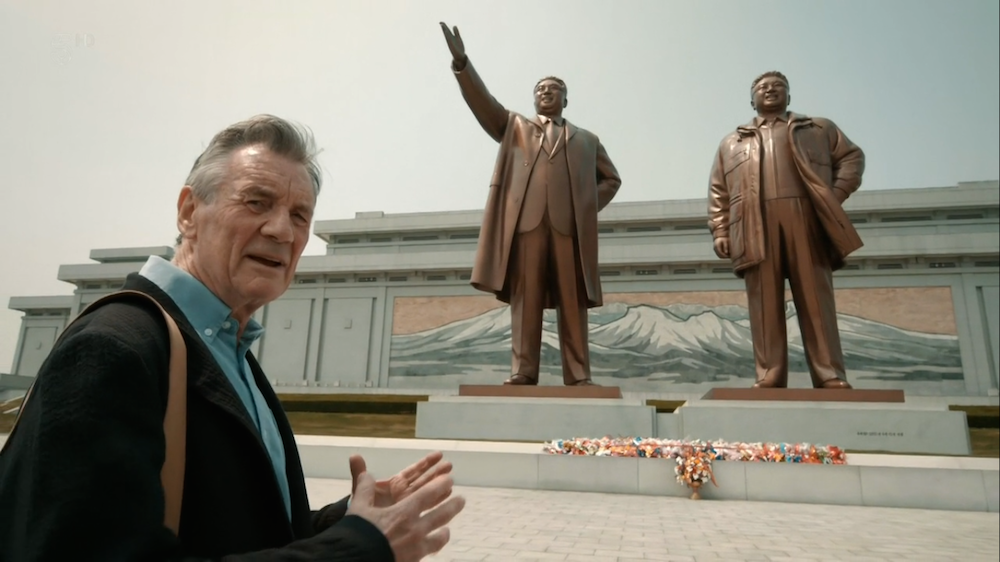