I couldn’t leave Korea without visiting Seoul, the country’s capital of some 20 million people with no real analog in the United States. We took the KTX, Korea’s bullet train, north from Busan, an experience that renewed my love for train travel. Tickets were in high demand, especially for the four-seat booths with a convenient folding table in the middle that had to be reserved as a set. Most people rested comfortably in their turquoise seats on the fast, quiet train, with the exception of one group of businessmen talking and laughing loudly in their own four-seater as though they had the train entirely to themselves.

Midway through the three-and-a-half hour ride, a pretty young KTX staff member entered the car, pushing a refreshment cart like a flight attendant on an airplane. She wore a white blouse, turquoise skirt, and turquoise scarf, matching the color scheme of the train. She calmly offered drinks and snacks to the passengers, ignored by all until she reached the businessmen in the middle of the car. One of the men laughed loudly and ordered some soju from her. It was early afternoon, but the men seemed to have been drinking since the morning.

The woman graciously placed the bottle and four cups on their table, then closed the cart’s drawer and continued a few steps down the aisle towards where I was sitting when the man with the boomiest voice swiveled his body around, calling “Cheogiyo!” (“Excuse me!”). Startled, her face perked up as she backed down the aisle and took out a few cans of beer for the men, placing them on the table. I couldn’t understand their Korean banter, but the men’s words seemed laced with lasciviousness. I was relieved when the woman closed up her cart and wheeled rapidly to the next car, barely acknowledging the remaining passengers.

We arrived in Seoul and got on a bus to the neighborhood of Sillim-dong, the bus driver greeting each of us in a dry monotone with an “Oseo oseyo” (“Welcome”) as we stepped on board. Garam’s sister Saera lived not far from the university where she was studying toward a degree in education, but the family felt that I would be too uncomfortable crammed into her tiny studio apartment with all four of them. Since there were no regular hotels in the immediate vicinity, they found me a motel one bus ride away, no transfers, and Garam gave me a payment card pre-loaded with the fare.

The motel was in an alley that looked like a cross between the Las Vegas Strip and the garish beach boardwalks of New Jersey, full of young people, mostly college students from Seoul National University and other nearby schools, wearing skinny jeans and heels and generally looking much cleaner than the pavement they walked on. Father walked with purpose as I followed behind, trying to absorb all the bright neon signs and colorful storefront windows.

Alleys were what worried me about getting around in Korea. The main thoroughfares were brightly lit, with clear blue street signs in both Korean and English, but once we turned down a side street, all bets were off. Directions became linked to landmarks: “Turn right at the deok jip (a rice cake house),” “Make a left at the hagwon (a private tutoring facility).” I developed the tunnel vision characteristic to the foreigner in a strange place. A few minutes in, we reached what appeared to be the back side of our destination: a large curtain, made from material similar to the brushes at an automatic car wash, covered the entrance to a small parking lot. Father pulled the end of the curtain aside, and we walked across the green polymer parking-lot floor to a small entrance lobby.

It was a “love motel” — the kind, I learned, that typically charge by the hour, but Father had made special arrangements for me to stay at this motel overnight, like a real hotel guest. The man at the front desk offered to Father some rental DVDs, but Father waved him off and we took the elevator up to my floor. The hallway was much darker than the alley outside, making it difficult to assess the cleanliness of the place. My room door opened into a small sunken square area for removing my shoes and changing into slippers. The bathroom was to the left, and I rolled my carry-on straight ahead into the bedroom. In the bedroom there was a full-sized bed with an ugly floral-print comforter, a small breakfast nook with a circular table and two chairs, a small dresser, and a CRT TV mounted up in the right corner of the room by the ceiling.

“It’s okay for you?” asked Father. “Kwenchanayo,” I responded, thanking him. The overwhelming hospitality of Garam’s family had made that word, Korean for “It’s fine” or “I’m alright,” the most useful in my limited Korean vocabulary. (“Is the food okay?” Kwenchanayo. “Do you need to use the restroom?” Kwenchanayo. “Are you tired?” Kwenchanayo.) Father gave me his cell phone, an ultra-compact, maroon-colored flip phone like nothing I had seen in the U.S., and told me to call if I needed anything or if I had trouble returning to the apartment by bus in the morning. Then he left, obviously anxious to get out of the red-light district and back to his family. I took a moment to decompress, enjoying the break from trying to impress that family all day.

There was something in the center of the breakfast table in a small cardboard box, so I opened the box and dumped out its contents: two individually-wrapped condoms. How thoughtful, I mused. It had been a long day of travel, and I needed a shower. There was a pair of bathroom slippers like I had seen at the helseu in Busan, but I still had no use for them. The turquoise combination shower-tub had no door or curtain, so I did my best to keep water from splashing all over the floor. Shampoo, rin-seu (conditioner), and shower gel were provided in three large plastic containers with push pumps, the containers in varying levels of fullness. Maybe I’ll do without the soap today, I thought, trying not to imagine the previous occupants of this sex motel using the same containers. No, no, I reminded myself, when in Rome…

After the shower, I found a tube of communal toothpaste waiting by the sink, which I shunned in favor of my own little travel tube. On top of the dresser were five bottles of interesting lotions and potions, all of which I assumed were meant to enhance the lovemaking process. I pulled back the covers on the bed to find a small brownish-red stain on one side of the bed sheet. It’s probably just dryer burn, I told myself, not somebody’s dried blood. I lay in bed and turned on the TV, one of my involuntary responses to staying in a new hotel room.

The first thing to appear on the screen was a sex scene. I immediately lowered the volume, which the last customer had left uncomfortably loud. Shouldn’t be surprised, I thought; this was the kind of place with condoms on the breakfast table. Images of women in different sex scenes flashed rapidly across the screen, and I felt sorry for them, with their pained expressions in locations anything but exotic. There is nothing sexy about this place, I decided, turning off the TV. Playing with another remote revealed even the mood lighting to be tacky.

I fell asleep exhausted. The next morning I successfully navigated back to the apartment, where I found Mother already preparing breakfast. I asked Garam why there were so many love motels, and she had a cynical reply: “A lot of men use them to cheat on their wives. That’s why they have those curtains, so you can’t see whose cars are in the parking lot.” Garam and Mother seemed disgusted with the amount of infidelity going on in the country. Another reason for the proliferation of love motels was the fact that the majority of Koreans still lived with their parents into their mid-twenties, which makes executing the act of coitus difficult:

Once college becomes too expensive for parents to send their kids to live in the dorms, there could be a market for love motels in the U.S., I thought, my entrepreneurial spirit awakened. But Americans would have to get over their prudery first.

The Korean Health Club: a Cultural Trial by Fire, Ice, and Nakedness 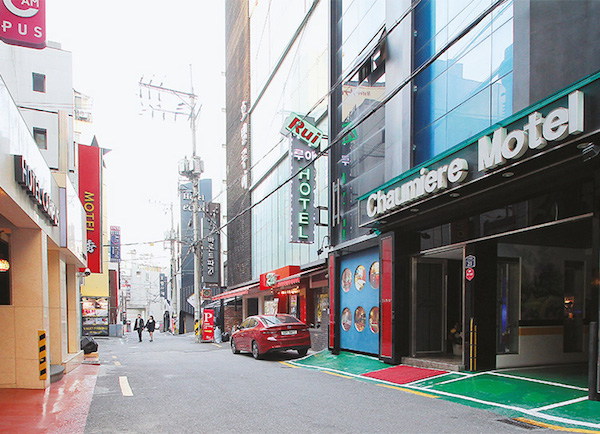