I live in Korea now in large part because I discovered Korean cinema in college — or rather, because I discovered Korean cinema right after graduating college. Though an avid film-viewer since I was a teenager, I somehow passed all four years at my university without partaking of the DVD selection at its library. Whatever I was looking for when I first went to have a look at it, I found something else, something life-changing: a wide selection of Korean movies, dating from the early 1960s to the mid-2000s, all distributed by the Korean Film Council (KOFIC). (One of the university’s librarians, I later heard, was a fan of Korean media, and made sure to receive all of KOFIC’s releases.) I checked out a few of its movies on DVD and, over the following years I stuck around town after graduation, proceeded to watch nearly all of them, intent on understanding this expansive film culture then entirely unknown to me.

Or rather, almost entirely unknown to me: when asked to name my first Korean film, I remembered having seen Park Chan-wook’s Joint Security Area (공동경비구역) as part of my sole film-studies class. Released in 2000, that thriller got traction in the West by dealing with the intrigue at the border between South and North Korea, the latter being the only Korea that interested most of the world at the time. More than a few other enthusiasts may remember Joint Security Area as their gateway into Korean cinema, but nowhere near as many as came in through Park’s 2003 film Oldboy (올드보이). Though based on a Japanese comic book, that tale of incest, abduction, revenge, and more incest did much to define Korean cinema — and to place it, not quite rightfully, under the heading of “extreme Asia” — in the 2000s. I actually screened it myself, at one of my frequent movie nights; as I recall, my friends’ reactions varied.

Bong Joon-ho’s politically charged mutant-monster movie The Host (괴물) fared better, as I recall, when it played on campus not long thereafter. Back then few American moviegoers knew Bong’s name; thanks to the performance of his class-warfare satire Parasite (기생충) at this year’s Academy Awards, unprecedented for a non-English-language film, that has changed. Korean cinema just last year marked its official centenary, but the pre-Parasite and post-Parasite divide has the potential to become its new B.C. and A.D., and this new era will see a great many Western viewers looking to get a handle on it. When I was watching through all those KOFIC DVDs, I could find almost nothing in the way of related reading material in English apart from poorly translated monographs on individual directors. But a number of such books have been published since then, including the brief introduction I still recommend most often, Darcy Paquet’s New Korean Cinema: Breaking the Waves.

Still, having come out nearly a decade ago, New Korean Cinema could perhaps use another edition. “After a decade of rapid change, by the mid- to late-2000s many people in the Korean film industry began to sense that a new era was beginning,” Paquet writes in its conclusion. Though directors “such as Park Chan-wook, Bong Joon-ho, Lee Chang-dong and others, were still at the start of what may turn out to be long and fruitful careers,” the “burst of energy that had been released by broader social changes and structural reforms to the industry had begun to dissipate.” Paquet calls 2006, the year of The Host, “a meaningful endpoint for several important aspects of New Korean Cinema,” the movement to which Bong and the other aforementioned auteurs belong, one that “was seen even at the time as a likely high water mark for the commercial industry.” But who, back then, would have bet on a Korean film willing a Palme d’Or, let alone an Oscar for Best Picture?

Having translated Parasite‘s English subtitles himself, Paquet would be well-placed indeed to write about the picture in an updated New Korean Cinema. An American film critic resident in Seoul since the 1990s, he first became well-known as the creator of Koreanfilm.org, where I spent a lot of time while trying to get my bearings in the world of Korean movies. His writing has also appeared in several critical anthologies published over the past fifteen years, including Chi-Yun Shin and Julian Stringer’s New Korean Cinema in 2005 and Frances Gateward’s Seoul Searching: Culture and Identity in Contemporary Korean Cinema in 2007. Not having been formed by film-studies departments, Paquet writes clearly, without reliance on the political-aesthetic jargon and fashionable abstractions expected of professors in the West. His essays thus come as welcome relief in such academically oriented volumes, the most recent of which is Rediscovering Korean Cinema, one of the “Perspectives on Contemporary Korea” series from the University of Michigan’s Nam Center for Korean Studies.

In his chapter “The Voice of the People,” Paquet puts into context the both comedic and grim societal critique of Park Kwang-su’s Chil-su and Man-su (칠수와 만수), a film previously featured here on the Korea Blog. It comes in the middle of the book, all but one of whose 35 chronologically ordered chapters focuses on a single picture. Han Hyung-mo’s Madame Freedom (자유부인), Yu Hyun-mok’s Aimless Bullet (오발탄), and Ha Kil-chong’s The March of Fools (바보들의 행진), each the subject of its own essay in Rediscovering Korean Cinema, will also be familiar to readers of the Korea Blog — a group that clearly doesn’t include Rediscovering Korean Cinema‘s editor Sangjoon Lee, a professor of Asian cinema at Nanyang Technological University in Singapore. In his introduction Lee names Han and Ha, as well as Night Journey (야행) director Kim Soo-yong and Deep Blue Night (깊고 푸른 밤) director Bae Chang-ho, “among the many Korean directors whose cinematic treasures have not been written about in the English language.”

Maybe Lee means they haven’t been written about in the peculiar variant of the English language that fills most of Rediscovering Korean Cinema‘s 612 pages. In a chapter on Oldboy, for example, University of California, Davis’ Kyu Hyun Kim introduces his subject as “one of the most problematic cinematic texts among the well-known works of New Korean Cinema.” Kukhee Choo of Sophia University argues that “although seemingly empowered through the non-heteronormative gender relations, the yŏpki females in South Korean romantic comedies of the early 2000s” — that is, the female characters who act in a bizarre, sometimes criminal fashion — “were nevertheless limited in terms of furthering a true feminist agenda.” Writing about Spring in the Korean Peninsula (반도의 봄), made in 1941 under Japanese colonial rule, Duke’s Nayong Aimee Kwon advocates for “a critical rereading beyond simple binaries of colonizer/colonized and resistance/collaboration” that “may draw attention to the polyvalent and contentious perspectives and multiple binds under which such transcolonial coproductions of mise en abyme were produced and consumed.”

Los Angeles film critic Priscilla Page once tweeted an excerpt from a reader on the films of Wim Wenders, a passage about how “destruction of the past as memory and trauma, and its transformation into scenario and spectacle” are “the preconditions for escaping oedipal subjectivity as conceived from the father’s perspective, in order to make way for the reconstruction of the pre-oedipal from the perspective of the son, via fantasies of doubling.” As Page commented, “There is so much academic writing about movies like this, and here’s the thing: it sucks.” But then, neither she nor I are quite within the readership of film theory, with its structural and verbal tropes maddening to those outside the academy, its narrow pantheon of authorities, and its interests that can seem remote from those of even the most ardent cinephile. This goes double for the cinema of a country like Korea, which invites the highly specific concerns (lasting or otherwise) of east Asian, postcolonial, and gender studies into the mix.

Yet if they can get past titles like “The Architectonics of Female Subjectivity in Post-crisis South Korea,” even non-academic readers will find much of value in Rediscovering Korean Cinema. Most of the pictures its essays take as their subjects are required viewing for anyone seeking familiarity with the country’s film culture: a newcomer to Korean cinema could do well to use its table of contents as a viewing list, and only after watching through it go back and read the book itself. As in any film-theory anthology, strained interpretations and trivial conclusions are inevitable (a chapter on the “minimalist” sound design of Hong Sangsoo, the Korean filmmaker I follow most closely, ends with a pronouncement that “sound’s expressive power takes many different forms”), but the contributors’ arguments matter less than the knowledge they marshal in order to make them: knowledge of why these particular films were made, why they found their audiences, and why they look and feel the way they do.

That distinctive look and feel of Korean cinema — the result of not just the free mixing of modernist and realist techniques in the “golden age” of the 1950s and 60s, referenced by several of the book’s essays, but also the free mixing of tones and emotions in which Korean movies still engage today — is what kept me watching all those years ago. It manifests in Flower in Hell (지옥화), Shin Sang-ok’s shoestring-budgeted tale of the criminals and prostitutes struggling to get by in the ruined Korea of the 1950s, just as much as it does in Yeon Sang-ho’s Train to Busan (부산행), the “Korean-only zombie film,” in the words of University College London’s Keith B. Wagner, from which the book takes its cover image. A “filmic experimentation with glocalization,” it looks to Wagner like the product of “an industry determined to maintain its regional and global appeal through the development and expansion of Korean genre cinema.”

The other genre spectacles to receive exegeses in Rediscovering Korean Cinema both come from Bong Joon-ho: his “Post-historical Catastrophe of a Biopolitical Ecosystem” Snowpierecer (설국열차), and The Host. In the book’s chapter on the latter, one of its most well-written, Yonsei University’s Peter Y. Paik explores how Bong “deliberately, almost perversely, thwarts the fundamental expectations associated with the genre,” all “in keeping with a philosophical outlook according to which the real significance of any event is always beyond our immediate grasp.” In The Host as in most of his work, he “reduces the significance of dramatic action, even to the extent of denying the audience the pleasures it expects from the genre.” Now that he’s been fêted by Hollywood, will Bong retain this tendency that sets him apart from it? And now that Korean cinema as a whole has become much more than a subject of academic interest in the West, will it continue to change the lives of Westerners who come across it?

The March of Fools: a College Comedy Darkened by Dictatorship 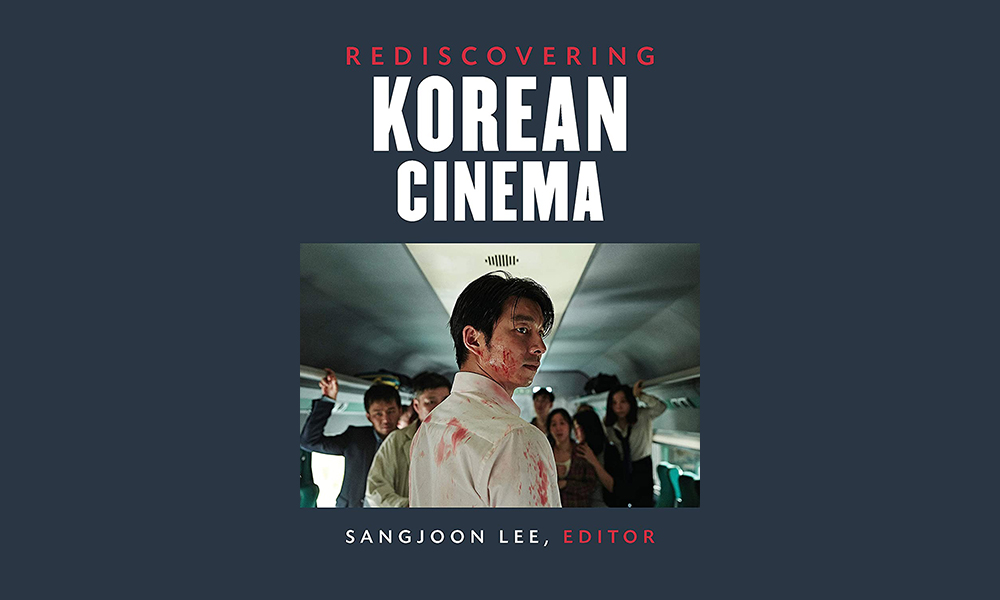