I often wonder why Korean kids almost never kill their parents. Not, of course, that I think Korean kids should kill their parents, but given all the stories one hears of the psychologically debilitating pressures faced by the youth in this country, and then how much of the time the agents of that pressure are the mother and father, one would think fatal lashings-out — deliberate or accidental — would be inevitable. The attempted explanations that come back when I wonder aloud about this are always flimsy: “Asians are socialized not to do things like that,” many have said, as if the children of other races were raised with explicit permission to to kill their parents. “They direct the violence inward,” others have said, which at least aligns with South Korea’s chilling youth suicide rate. And when they’re not killing themselves, Korean kids have, on occasion, been known to kill each other.

Youth-on-youth violence provides a subject for Kim Sagwa’s Mina (미나), a novel newly out in English translation by Bruce and Ju-Chan Fulton. (Those respected translators also brought into English Yoon Tae-ho’s comic series Moss, previously featured here on the Korea Blog.) Now in her mid-thirties, Kim still counts as a more or less a young novelist, but she was even younger when the book, her first full-length novel, first came out in Korea a decade ago. Both Mina and the shorter-form work that preceded it won Kim accolades as a something of a voice of a generation in Korea, or at least the voice of a particularly disaffected generation in Korea, ineffectively educated and at best barely employed, given to enervated bouts of cursing and fulmination against society, often while drinking and smoking under legal age. Even in the hands of translators as long-established as the Fultons, the youth of the novel’s voice come through; imagine a twentysomething, female Thomas Bernhard directing her frustration and rage not against her small European country for its role in the Second World War, but against her small east Asian country for the rigidity and irrationality of its educational and economic class structure.

“The private education system in P City” — almost certainly a stand-in for Seoul — “looks down upon P City’s broken public education system, offering a customized and quality education based on a student’s achievement level,” the narration at one point declares. “It’s not a solution, merely a gigantic market that feeds off the broken public school system. The cram schools make a place for themselves by seizing on the flaws and weaknesses of the public schools, creating a massive market, and so they succeed, but that’s it.” Public education offers students few paths: “one for the really smart kids, who already know the steps they have to take to maintain their elite standing and better avail themselves of the opportunities afforded them; one for most kids, whose only option is to endure in the hope that the university has to be better than this; and stuck in between these two are the students who have lost their way, who engage in useless fantasies, who suffer from depression and end up killing themselves.”

The novel delivers many such dire diagnoses, sometimes but not always in that same essayistic voice. At times the narration gets closer to the mind of Crystal, the teenage main character who has dedicated herself to the rote excellence demanded by the schools she attends, cram and otherwise. “Because she has had no experiences to speak of, the notions she’s equipped herself with for academic writing are all she has… they’re Crystal herself. It’s amazing how well she can expound in English upon Rousseau, using the appropriate tenses, prepositions, and proper nouns with correct pronunciation and intonation.” It doesn’t matter “whether she’s actually thought about Rousseau, whether she likes Rousseau. What’s important is whether she can talk about Rousseau (using the correct nouns), whether she can explain Rousseau’s Confessions (using the proper tense), and whether she’s acquired the proper accent, and the intonation and sound assimilation that go with it.”

The linguistic enforcement of class lines, mainly with a kind of culture-stripped English (imagined as an effective tool with which handle foreign material of any origin, Rousseau and well beyond), is indeed one of the most risible aspects of modern Korean life. But what bothers Crystal is her fellow students’ unwillingness or inability to throw themselves into mastering that English, as well as all the other subjects expressly taught only because they appear on the standardized tests that function as society’s sorting algorithms. “I don’t like people,” Crystal writes late one night, warming up before grinding out another piece of English composition homework. “They’re idiots, and I hate idiots. Why do people want to die? Because they’re dumb. I don’t understand it. I don’t understand people. I’m practical and efficient and pragmatic. But other people aren’t. It makes me mad.”

That passage comes relatively early in the book, when Crystal has only just begun to come unhinged. Readers familiar with Korea might even recognize in her description of herself as “practical and efficient and pragmatic” a fairly common (if less than 100 percent reality-based) expression of national self-regard. But toward the end, Crystal’s inner monologue has taken this supposed pragmatism to an extreme, and she expresses the dictator-esque desire for the extinction of not just those who appreciate culture, but culture itself: “Regardless of when, there’s always human garbage. I get it. Totally understand. Just think of all the weird books in the world and all the conversations by the weirdos who read them. Workbooks for the university entrance exam are all you need. Burn the rest of them. Thank god the era of the written word is over and it’s now the era of images. Thank god we won’t even have to lift a finger for all that human trash to get dumped.”

The titular Mina, Crystal’s ostensible best friend, counts as one of those “weirdos,” if only just. The daughter of a writer with only one book to his name who nevertheless became and remains well-off by means of a lottery win invested in real estate, Mina has grown up with relatively direct exposure to a variety of things Western from Derrida to the Doors, exposure that Crystal at once envies and disdains. (Crystal burns with resentment at Mina’s ability to reference a variety of foreign works and artists in conversation with a cram-school teacher — even if Mina only knows their names and titles, and even if she does so in faulty English.) When Mina’s previous best friend Chiye commits suicide, throwing herself off the top of a complex of purpose-built study rooms students rent by the month, Crystal finds herself baffled and disturbed by the emotions that subsequently drive Mina to turn in an exam blank and then stop coming to class entirely.

“I’m sick of this life,” Mina tells Crystal after withdrawing from their school. “It’s not normal. Cram school, home, school, test, school, cram school, homework, tutor, cram school, home, tutor, cram school, home, school, back to cram school, back to tutor, back for a test back to homework back to school back to school back to school. Home. Cram school. How can anyone think this is normal? It’s crazy. Everyone’s crazy. I can’t stand it. Not anymore! I can’t stand this life. This is hell. It’s hell. Hell Chosŏn!” That last expression, commonly romanized as “Hell Joseon,” frames modern South Korea as an absurd and unlivable update of the class-bound society that existed during the Joseon dynasty of the late 14th to the late 19th century. Despite having only come to prominence in the past few years, it has already passed into the realm of cliché, and in any case one wonders about the basis of comparison: to the devastation of the postwar 1950s? To the crush of mandated industrialization over the subsequent decades? To the Joseon era itself?

Crystal finds even this mildly dissident worldview of Mina’s, let alone her later insistence that “the world is made by kind hearts,” totally incomprehensible. All this and the fact that Crystal develops a sudden and intense crush on Mina’s blankly average older brother Minho — both he and Crystal, as she sees it, “don’t understand why people behave the way they do, and they don’t try to find out” — convinces Crystal that Mina must be forcibly removed from existence. Crystal’s earlier killing of a kitten with her bare hands in the midst of some kind of quasi-fugue state makes it that much easier to buy a few knives and turn them on her supposed best friend. (An aside on the weapons statistically employed in Korea’s murders, mostly of them knifings and the rest beatings, will surely give pause to reading Americans, especially those who wonder why so many Koreans seem to consider America inherently preferable to Korea.)

Though written a decade ago, Mina reflects perceptions of Korea that remain current today: perceptions of conformity, of hyper-competitiveness, of fixation on the West (the movies referenced, though not named, include Mulholland Drive and Vertigo, and the music tends toward Radiohead, Madonna, and Justin Timberlake), of nouveau-riche aspiration and philistinism. None of this is quite the image of Korea presented by the country’s current pop music and television dramas, to name two forms of Korean culture with large and receptive audiences across the rest of Asia, and to an extent even in the West. But the wider world has also started to get the idea that, as Ian Buruma put it in a piece on the 1988 Summer Olympics in Seoul, “something wrong happened on the way to modern nationhood in Korea.” But what brought the country to its current state of malaise, especially among the young, remains a matter of open inquiry. Kim Sagwa, at least as evidenced by Mina, has little interest in finding a definitive cause, but she certainly renders a harrowing effect. 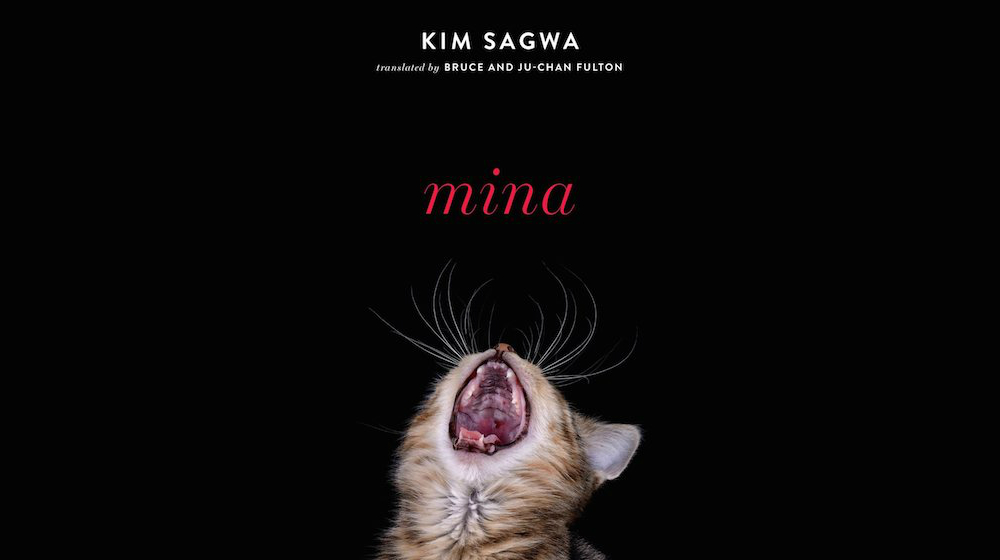