A young man from the city drives out to the countryside, ostensibly to set in order the affairs of his recently deceased father. But not long after he arrives in the remote village where Dad spent his final years, he decides to stay. On some level, this looks like an example of the kinds of acts of filial piety you’d see in any number of Korean stories, but the circumstances of our protagonist, a certain Ryu Haeguk, quickly get complicated. And in fact, they’d already got complicated before the story begins, what with his having somehow lost his wife, daughter, and career at his relatively early age, thus leaving him free to pursue the suspicions that arise shortly after he meets the cast of shifty-looking creeps who populate the hamlet he now calls home.

The brief prologue of Yoon Tae-ho’s comic series Moss (이끼) describes Haeguk as “fussy and compulsive, so that small misunderstandings build into major events” — such as the aforementioned total disintegration of his life in Seoul. But his attention to detail, combined with a borderline-foolish fearlessness we see demonstrated early and often in the story, puts him firmly in the tradition of the ideal mystery protagonist, unable to resist probing into the not-quite-explained until, and indeed well beyond, it gets him into trouble. Here, the process begins with one driving question: why has the village head written off his father’s sudden death, at age 67, as a case of “old age,” not bothering with and perhaps even refusing to order a routine medical examination? Haeguk’s increasingly dangerous investigation of his estranged father’s life, the place where it ended, and the people around whom it ended originally ran in Korean between 2008 and 2009, not as a traditional print comic but as one particularly successful example of the made-for-the-web form of comics Koreans call “webtoons.” It gained such a fan base, in fact, that it became an award-winning feature film in 2010 and did much to make Yoon’s name as one of Korea’s most famous webtoon artists. He’s more recently demonstrated his wide range with the even more popular Misaeng (미생), a webtoon satirizing in the dead-end office jobs often held by Korea’s younger generation, which went on to become a hit television series.

Only now has Moss become available in English, translated by the formidable husband-and-wife team of Bruce and Ju-chan Fulton. (I recorded a podcast interview with Bruce here in Korea in the summer of 2014.) Enthusiasts of Korean literature will almost certainly know the names of the Fultons already, given their prolificacy and astute choice of material, most recently a retranslation of Hwang Sun-won’s Dickens-scale The Moving Castle (about which more in a future Korea Blog post). Here they try their hands at one of the most popular of all current Korean storytelling forms. Should you make the trip to Seoul, take a glance at the screens of the mobile phones at which almost everyone aboard the subway will be staring; chances are you’ll see more than a few webtoons scrolling by.

Moss takes advantage of the format: each of its episodes unrolls vertically, like an actual scroll, usually landing on some sort of cliffhanger or revelation: Haeguk, and thus we, discover the village head’s shady past as a police detective, the even shadier pasts of the other inhabitants, a secret tunnel built under his father’s house, a murderous intent among those who surround him — that sort of thing. The story has drawn comparisons to the classics of Southern Gothic literature, especially those that drop a citified protagonist into a small, isolated community, set in its ways, peopled with eccentrics, and exuding a sinister vibe that deepens with every page turned. “Just play dumb,” Haeguk tells himself, having settled into the community as best he can after selling most of his father’s land to the developer who’s been waiting for it. “Lay low and blend. Move slow and steady, grab on and stick like moss.” His investigation determines early that there’s, “strictly speaking, not a single family unit here,” and almost no women, apart from a young-ish widow from whom he rents a room and about his attraction to whom he engages in a bout of self-loathing. Later, he pieces together that the residents haven’t all come here by chance, and the retired detective — the one who didn’t want the death of Haeguk’s father looked into — may have used his power over years and years bring everyone there one at a time, with the utmost deliberateness. But why?

I haven’t even touched on another major player, a district attorney in his own countryside exile, sent down after a tangle with Haeguk in the past. I’d tell you more about their relationship and the probable result of their inevitable man-to-man encounter in this alien setting hostile to the both of them, but I don’t yet know much about it myself. Moss‘ serialization in English, which began in January on the Huffington Post, has only reached episode 42 of 82, with a new one going up every Monday. Haeguk has cheated death a couple times already, and plenty of cliffhangers and revelations surely remain in store. You can read more about the process of translating a work like this in Asia Pacific Memo’s interview with the Fultons. “We saw in the story an allegory of abuse of power during the period of military dictatorship in the Republic of Korea,” they say, emphasizing that Yoon has created something much more complex than the standard everyman-in-a-eerie-small-town thriller: “Like much good fiction, and especially with works that involve political and social problems, there’s a great deal of hidden meaning.” (Sometimes these meanings proved especially hidden, so they ran their questions by Korean friends, though “they too had difficulty understanding certain areas of the story.”)

As to how Moss arrived at the Huffington Post, the Fultons talk about how the internationally-minded Korean webtoon company Rolling Story took it and about two dozen other series in translation and pitched them together as a serialization package. The site accepted six of them, including, of course, the Fultons’ translation of Moss. I’ll admit that, unfailingly aggravated by its glitchy and distraction-intensive design (not to mention their pay practices), I’ve long instinctively avoided the Huffington Post. Even with webtoons it can’t get the interface quite right, a particularly bothersome example being how the navigator to click to the next episode sometimes appears and sometimes doesn’t. A far cry indeed from the advanced webtoon infrastructure of the Korean web, but I’ll deal with it; now, just like Haeguk himself, I’ve simply got to know what killed his father and why, no matter the obstacles that lie in my path.

Get started reading Moss, translated into English by Bruce and Ju-chan Fulton, from the first episode here at the Huffington Post. 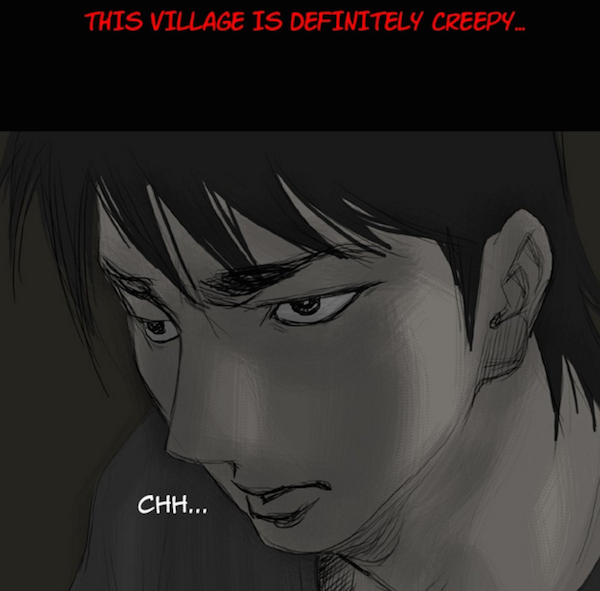