As I first got acquainted with Korean culture, I started to wonder why Koreans talk about Harvard so much. I couldn’t help but notice that, when the subject of college came up in any Korean context, it was only a matter of time before someone mentioned Harvard (or rather, as Korean pronunciation renders it, 하버드 — habeodeu). Browsing the tables in Korean bookstores, I noticed that authors with even the most tenuous connection to Harvard got it loudly emblazoned on their books’ covers. I knew, of course, that Harvard has a long history in America, respectable ivy-covered brick buildings, and a great deal of East Coast cachet, but I couldn’t come close to explaining the evident depth of this Korean Harvard obsession.

I learned the reason behind it from my Korean language-exchange partner back in Los Angeles, after I laughingly brought up the well-known television drama Love Story in Harvard (러브스토리 인 하버드) in order to explain its misuse of the preposition. “They think Harvard is the American Seoul National,” she explained, describing for me the way her countrymen conceive of their schools in a purely vertical hierarchy, with Seoul National University (her own alma mater, incidentally) sitting undisputedly at the top. These Harvard-obsessed Koreans, it seems, simply turned around and applied that same thinking to America (the “number one” country to many of them, going by a purely economic hierarchy), assuming that the first American university they’d heard of must occupy the top spot.

When I meet new Korean people, I rarely sense any unbridgeable cultural gaps — unless, that is, the topic of conversation turns to higher education, which among Koreans (even those long out of college without school-age children themselves) it often does. Sometimes they look surprised when they realize that I don’t give the proverbial two shits about where they went to school, or when I tell them that not every American student who could get into Harvard applies to it (or even considers it), or when I express admiration for those who didn’t go to college at all.

We’ve certainly got our Ivy-League-or-bust types, I try to tell them, but the savviest American students think more in terms of finding the one college out of the possible many that best suits their personality and desires on a variety of axes: academic focus, but also sports, location, social life, architecture, food, exercise facilities, selection of arcade games, and so on. But that, in the main, doesn’t figure into a college-applying Korean high school student’s calculus: they study the hardest they can, get the highest test scores they can, and, no matter their set of interests, go the “best” college they can — grappling with no ambiguity about which one that is.

If they can’t get into Seoul National, they’ll try for Yonsei University. If they can’t get into Yonsei, they’ll try for Korea University. These three schools together form the acronym SKY, the goal of the hard-cramming students featured in Reach for the SKY (공부의 나라), a documentary by Steven Dhoedt and Choi Wooyoung now making the festival circuit. Its Korean title translates literally to “The Country of Studying,” and that means studying for one particular exam: the College Scholastic Ability Test (대학수학능력시험), better known as the Suneung, the Korean equivalent of America’s SAT.

The Suneung, though, happens on just one day each year: if you get sick, you have to tough it out or wait a year and retake it; if you get an unsatisfactory score, you have to wait a year and retake it; if you sleep in, you call the cops and they’ll bring you to your test center on the back of a motorbike, lights, siren, and all. The exam books come the morning of, delivered by armored cars under heavy security. Not only do all the other students delay their classes that day, the stock market delays its opening. Airplanes stay grounded during the listening portion of the English section. All day long, radio and television news keeps the nation posted on the test’s progress. After the Suneung’s conclusion, evening programs closely examine that year’s questions and answers, to the intense interest of all tuning in.

Korea, it would seem, is not like America. But foreigners of many nationalities will no doubt do a lot of tsk-tsking as they watch Reach for the SKY, so vividly does it illustrate the national sacrifice of adolescence in the name of admission to a name-brand university —  “brand” being the operative word. Seoul National surely offers a world-class education, but who can deny that it sells, above all, the perception of itself as the best school in Korea? For decades, the country’s education system has presented its young students with a deal they can’t refuse: study morning, noon, and night, and you’ll be set if you get into one of the right colleges, with their implicit promises to hand their graduates a ticket to a comfortable future without making any major demands on them, especially by comparison to the agonies of high school.

Alas, that social contract, like so many others in Korea (and elsewhere in the developed world), has begun to break down. The increasing pressures for academic performance combined with the falling returns on that performance have made Korea a champion in one division above all: suicides between the ages of 15 and 25. A spate of articles have appeared over the past year on the phenomenon of “Hell Joseon” (헬조선), a label a growing number of young Koreans have seen fit to stick on their country that combines the name of Korea’s 14th- through 19th-century feudal dynasty with, well, Hell, describing a stultifying, unforgiving society lorded over by a small, insular elite and a vast, remote officialdom, shot through with injustice, nepotism, futility, and absurdity. It infuriates those who see themselves as living in Hell Joseon that the older generations, who came of age and worked through most or all of their careers during an era of huge economic growth, have nothing to offer but a parental dole and the nagging advice that they have only to work harder to kick their stalled lives into gear. Back in the second half of the twentieth century, when Korea was developing in a straightforward manner under the commands of a strong state and a handful of conglomerates, hard work by itself could generate real returns, but today the correlation looks rather murkier. The resultant frustration has driven a fair few Koreans to escape Hell Joseon any way they can, if not through suicide then at least through emigration, but sometimes the condition follows them outside Korea, continuing to provoke troubling behaviors.

Take, for instance, the bizarre story of Sara Kim, a Korean student at Virginia’s Thomas Jefferson High School for Science and Technology (which, among Koreans, enjoys an obsession comparable to the one over Harvard), who attained celebrity status as a “Genius Girl” back in her homeland for her unprecedented admission to both Harvard and Stanford (the object of a similar if less intense mania). But Sara’s story soon unraveled, and Korea soon found out that she’d made it all up, going so far as to fabricate acceptance letters from both schools, then impersonate a professor in order to silence the early rumors that she’d done so. I heard a Korean radio interview with her, aired shortly before the house of cards came down, wherein she told of receiving a wholly fabricated congratulatory phone call from none other than Mark Zuckerberg (a Harvard man, albeit a dropout, so America forgives him for it) in what now sound like the chillingly placid tones of the truly disturbed.

These academic rigors might sound appealing to the kind of parents, and indeed students, who think American education has gone a bit soft. The problem is that none of these students, from the laser-focused study machines who coast into a SKY school on a perfect Suneung score the first time to the third-year repeaters bound to wind up at one of the “BMW” schools (the triumvirate of Baejae, Mokwon, Woosong, holding down the other end of the scale), learn anything useful, or even particularly meaningful. Their flood of blood, sweat, and tears pour into one goal and one goal only: penciling in circles, just quickly and correctly enough, on a multiple-choice exam.

Along with all that blood, sweat, and tears flows a veritable Han River of money. Reach for the SKY gets access to Kim Ki-hoon, who, as the most famous teacher at Korea’s biggest supplementary education company, pulls down the equivalent about $4 million a year. He does it teaching English, yet can’t speak the language confidently himself, and neither can the great majority of all these thousands upon thousands of high-schoolers ostensibly cramming it into their minds. I’ve met many Koreans who exude shame at their lack of a command of English after having studied it so hard since grade school, but they haven’t really been studying how to speak English; they’ve been studying how to complete a section of the Suneung.

Thus all that anxious work, spending, and superstition (Reach for the SKY shows one parent and daughter consulting with a fortune-teller, surely just the tip of the iceberg) of a Korean’s first seventeen years goes toward nothing more than their being fed into a sorting algorithm, with nothing to show for it at the end of it but a qualifying score for a top college or a lack thereof. All that human energy — energy its possessors could have spent writing novels, coding apps, playing in bands, cooking new dishes, building robots, learning to actually speak other languages — gets squandered on jockeying for position against other Koreans. One common defense of the Suneung discounts its pointlessness in light of its sheer fairness (overlooking the advantage of the wealthy in paying for private institutes and tutors), but it reminds me of the same defense used for all of history’s indefensible societal arrangements: “At least you knew where you stood.”

Then again, American higher education, with its grotesquely inflating price and its hazy constellation of goals and benefits nobody agrees on, has also devolved into a racket. Just think of all the students and parents scrutinizing the tea leaves of U.S. News and World Report. “Here is this third-rate news weekly, aimed at businessmen who don’t like to read,” wrote Tom Wolfe in I Am Charlotte Simmons, “trying desperately to move up in the race but forever swallowing the dust of Time and Newsweek, and some character dreams up a circulation gimmick: Let’s rank the colleges. Let’s stir up a fuss. Pretty soon all of American higher education is jumping through hoops to meet the standards of the marketing department of a miserable, lowbrow magazine out of Washington, D.C.!” It looks as preposterous, from this distance, as anything in Reach for the SKY.

Whenever I hear an American high-school student talking about college applications, I ask them why they want to go to college. Usually I get nothing but a deer-in-the-headlights stare in response, but the kids who can come up with an answer tend to say something not especially coherent about how they want to stay in the middle class, which entered its death throes at least twenty years ago. I don’t style myself as any kind of giver of advice, and by the time the receivers have reached high school it’s probably too late, but I stress to them my own regret at not having taken time between high school and college to do something other than school: to do, in their own cases, the writing, coding, playing, cooking, building, speaking, whatever pursuit actually aligns with their interests and abilities — anything, needless to say, except test-taking. But as Reach for the SKY underscores, if anyone could really use a gap year, it’s the Koreans. 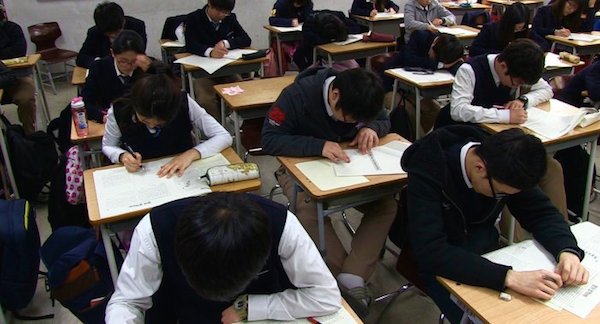