A Korean friend I knew back in Los Angeles often talked about a recurring fantasy of hers: to drive through empty American states like North (or sometimes South) Dakota for hours and even days on end, not setting eyes on another soul all the while. Though, like any self-respecting American, I do enjoy a good long road trip, and even drove across the whole country before moving abroad, her vision always struck me as more terrifying than tantalizing. Where would you get decent coffee? What if the car breaks down? Could you even get a cellphone signal out there? How long before everything would inevitably go full Deliverance?

After I started watching Korean television, though, I began to understand. Soon after getting satellite television hooked up at home in Los Angeles specifically for the Korean channels, I settled on a favorite program: Travelogue Korea (한국 기행), which airs every night on the educational network EBS. Somehow, in a country about the size of Indiana (and of a considerably smaller size than Dakota North or South), the show has found hundreds upon hundreds of episodes’ worth of places to go, paying special attention to the inhabitants of remote islands, small farms, fishing villages, and rural hamlets.

But then, as I wrote about in Gangneung — a veritable megalopolis compared to the average Travelogue Korea destination — South Korea feels much bigger than it is when you’re traveling through it. Some of this has to do with the sheer concentration of the country’s population, half of which lives in the Seoul metropolitan area alone. When you pass out of it, two changes become apparent: not just a dramatic drop in the density of inhabitants, but a rise in their average age. Hence the venerability of so many of the episodes’ stars, and some of the themes on which it focuses: long lives, almost-as-long marriages, the continuation of long traditions, the flavors of local food, the variety of local dialects. 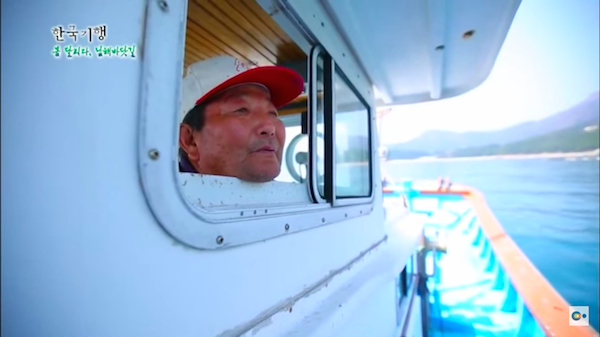 One of Travelogue Korea‘s immediately appealing points, for me as a student of the Korean language, had been its subtitles: Korean television tends to put a lot of text on screen anyway, but this show spells out almost everything the locals it visits have to say. It does so not in English for the benefit of Westerners watching on satellite TV, but in Korean for the benefit of Koreans watching at home, sanding the linguistic rough edges off the centenarian kimchi-making great-grandmother, the boisterous fisherman, the grizzled seaweed farmer. It’s not so much that their nonstandard grammar and usage offends the refined ears of Seoulites, but that Seoulites — or many Koreans under the age of 60 anywhere — have real trouble understanding them at all.

The apparent degree of mutual unintelligibility between urban and rural speech, even apart from the generational differences also involved, shows that when Koreans get off the farm, they get all the way off the farm. The past 60 years of massive migration to Seoul alone suggests that they never developed an anti-urban bias as effective as that still prevalent in America and Britain, the kind that so often gets Western tourists looking aghast at the lookalike tower blocks seen in every Korean city.

The standard Korean term for “tacky” literally means “village-like.” But a program like Travelogue Korea — to say nothing of all the other travel shows on Korean television, some of which go to the farthest-flung corners of the Earth — shows that life in the countryside, or at least its imagery, still retains a certain appeal.

No matter where in the world you live, you don’t need satellite television to watch the show, since EBS has made more than 1000 Travelogue Korea videos available on Youtube. Sorting them by popularity reveals its audience’s fascination with the few people who manage to if not exactly go back to the ancestral land, then to get out of their city and live in “their own way”: the young family who perpetually roam the country in an RV; the middle-aged man who retreats to a life of beekeeping; the eccentric who builds his private utopia in the woods, complete with working turntable and vinyl record collection; any number of couples who trade in their professional lives for agrarian ones. 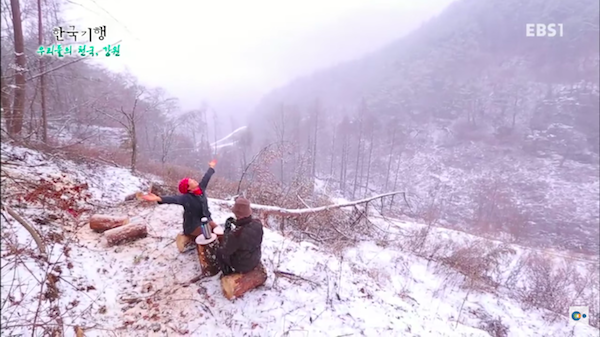 Some American writers have, in recent years, charged Henry David Thoreau with laziness, hypocrisy, and “moral myopia,” but Koreans have shown a renewed interest in going to the woods to live deliberately, front only the essential facts of life, and see if they could not learn what it had to teach, and not, when they came to die, discover that they had not lived — or at least, to stick more closely to the terms used by Travelogue Korea‘s gentle narrator, to find beauty and happiness. That impulse, or one like it, has also prompted some companies, most famously internet-portal company Daum, to “de-Seoulize” by moving their headquarters to places like Jeju Island, previously known as Korea’s default honeymoon destination.

Even those visiting Americans who can’t bear the idea of living in the same building as other people have to admit that, apart from the subway at rush hour, Seoul doesn’t feel quite as physically crowded as they might have expected. But to the Koreans leaving comments like “I’m jealous,” “When I get old, I’m going to do this,” and “I wish I could to live so freely” below Travelogue Korea episodes on Youtube — Koreans who would sympathize with my friend’s longing for Dakotan desolation — it surely feels psychologically crowded, suffused with obligations to friends, family, employers, classmates, and members of every other group that can claim them, however tenuously.

But other commenters sometimes come along to douse their ardor with warnings, drawn from personal experience or otherwise, that living simply isn’t all it’s cracked up to be: the weather gets even more arduous, you have to do a lot of manual labor, nobody can really prepare themselves for the conveniences of Korean urban life vanishing all at once, and you need quite a bit of money to even consider it in the first place. Still, though you’d never catch me making such a move myself, I would encourage Seoulites who dream of making a life for themselves in and learning the ways of the Korean countryside to give it a shot. As Travelogue Korea unfailingly shows, the smallest villages have the most delicious-looking food; and as it implicitly asks, how much longer will the people making it be around? 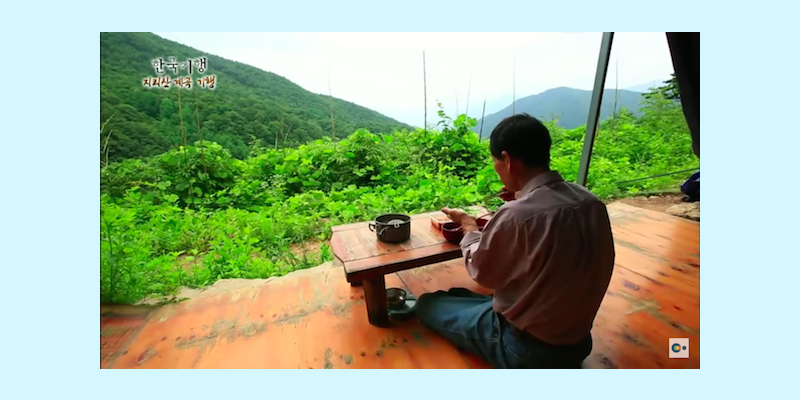