I first moved to Los Angeles not long after Conan O’Brien did, or more precisely, after he and his team resigned from the stewardship of The Tonight Show which had relocated them from New York just the year before. But it didn’t take him long to get back on television, and news of his exploits in Los Angeles swept through my Koreatown circles when his new venture, a cable show simply called Conan, aired a bit where he and Korean-American actor Steven Yeun hang out nakedly — and, for O’Brien’s part, with characteristically comedic anxiety and discomfort — in a neighborhood Korean spa. (Well, not exactly a Koreatown spa, but Wi Spa, big complex over in Westlake popular with non-Koreans. Close enough.)

And so, now that I’ve moved from Los Angeles to Korea, it only makes sense that O’Brien would follow to shoot a whole series of special segments on life in the Land of the Morning Calm. (Which does have its precedents: Conan has made a thing of location shows in places like Cuba and Armenia, and Anthony Bourdain brought his show here last year.) “A while back, I got a letter from a fan who lives in South Korea,” he says by way of introduction, showing her letter (written an exam form) and the boxful of Korean snack foods she also sent along. He decided to take this young lady up on her invitation to her homeland, “and that’s when I found out that even though my show does not air in Korea, thanks to the internet, I have some fans there,” hundreds of whom, instigator “Sunny” Lee included, turned up to greet him upon his arrival at Incheon International Airport.

The Noryangjin (in O’Brien’s no doubt deliberately clunky pronunciation, “no-ree-on-gone”) fish market, a PC game cafe, the set of a television drama, a tae kwon do demonstration, a traditional restaurant, the Bonkwangsa (“bo-gwong-sow”) Buddhist temple, the Joint Security Area at the Demilitarized Zone on the North Korea border, a K-pop video: the journey passes through many of the spots even a casual Korea-watcher might expect, Conan makes some more Korean fans, Korea gains some more of that ever-desired positive exposure in the West (and for that reason the shows’s producers must have found the country reasonably cooperative), and we all get entertained along the way. 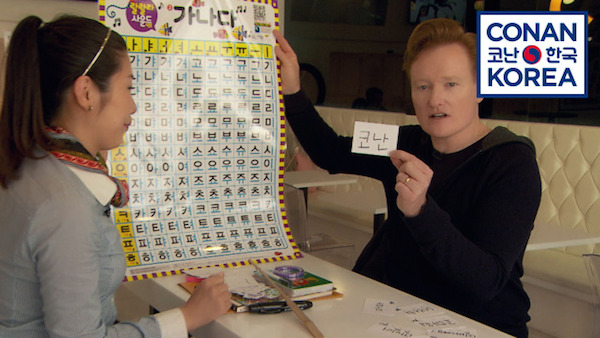 Even though many longer-term Western residents of Korea (as opposed to those deliriously thrilled Korean fans, whom I can’t imagine taking exception to anything here) have their complaints about the aspects of the culture to which O’Brien’s travels pay either insufficient or excessive attention, it seems like everybody benefits. The only part that strikes me as a missed opportunity strikes me as a missed opportunity in nearly all narratives of Western, and especially American, humorists abroad: the too often unresisted temptation to play the part of the bumbling metropolitan provincial, drawing buckets and buckets of material from the wells of ignorance, incomprehension, and ineptitude.

Actually, O’Brien does better on that count than many. No sooner does he arrive than he sits down for a Korean language lesson — which he quickly steers into an exploration of his Irish Catholic guilt and stern-schoolmistress fetish, but still, it’s more than Dave Barry did when he went to Japan. Dave Barry Does Japan, the book that trip produced in 1992, remains in my mind as the locus classicus of a certain kind of fish-out-of-water dissimulation practiced by the high-profile Americans who visit east Asia — most often Japan, though China has also long provided a venue for this as Korea has just begun to — and, in the name of big laffs, affect enough IQ loss to throw themselves into a state of perpetual disorientation.

For Barry in Japan, at peak performance of his middle-aged-dope-from-Florida act, this manifests most punishingly in a running gag about his supposed inability to pronounce or even remember the words “domo arigato.” The problem, for me, has less to do with the weakness of the joke than with its implausibility; you don’t get a career like Barry’s without considerable observational and verbal horsepower, even if, like him, you harness it to write about boogers. By the same token, I don’t quite buy the air of hapless distractibility put on by O’Brien, surely one of the most focused and competent men ever to sit behind a late-night talk show desk. 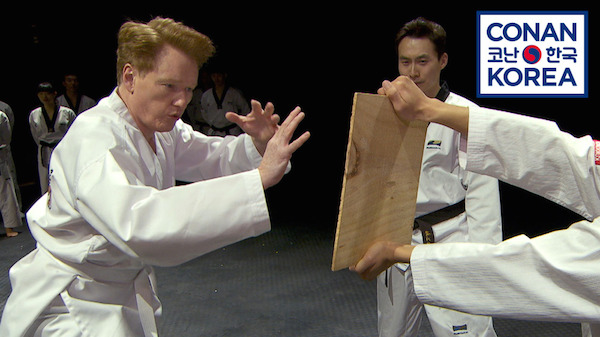 Yet here and there O’Brien lets slip that he understands much more about what’s going on around him in Korea than it seems, even as he bungles, dozens of times in a row, his Korean-language lines while shooting a soap-opera cameo. It makes for an amusing reversal when in from Los Angeles flies Steven Yeun, ostensibly in his motherland to serve as O’Brien’s Virgil but immediately proven unequal to the task by their first meal together. “I mean, I’ve seen it,” he sputters in the face of the host’s mounting frustration at the inability of his “cultural ambassador” to identify the dishes in front of them. “So, it looks like… rice,” he trails off, speaking more directly to the Korean-American experience than has many an acclaimed novel on the subject.

There, O’Brien tries to eat his soup with a spoon by holding that spoon with his chopsticks — and succeeds, updating for the sushi-schooled 21st-century West a situation that, thirty years ago, would have had him throwing up his hands and struggling to spear bits of unknown and unwanted food on their tips. In away, it almost feels like a waste for such a tall, rangy, pale character, topped by what one of his writers described to me as his signature “coxcomb of hair” (in an episode of my podcast Notebook on Cities and Culture, which I later took on a Korea trip of its own), to do all this today, so far past the expiration date of the Westerner in Asia’s old bull-in-a-china-shop routine to which his physique so suits him. But his comic persona of straight-faced (and even strait-laced) yet knowing freakishness, forged in the flames of 1980s irreverence and 90s irony, could only rise to such prominence in our time.

As much progress as South Korea has made toward its longed-for if vaguely defined “global” status, visible foreigners — especially those as visible as O’Brien — still stand out on the streets of Seoul. In the eyes of the locals, all of us enjoy some degree of honorary weirdo status here, which, in many cases, lets us escape whatever weirdo status we suffered back in our birthplaces. I wonder how many in O’Brien’s internet-watching Korean fan base realize that he comes off as not quite of this Earth even back in America, and I wonder how much that fan base can grow given the society’s distaste for irony, as I wrote about in a previous post on Alain de Botton, another Westerner with surprising name recognition over here. But O’Brien did go to Harvard, and as I also touched on in that post, that counts for something in Korea. Maybe everything. 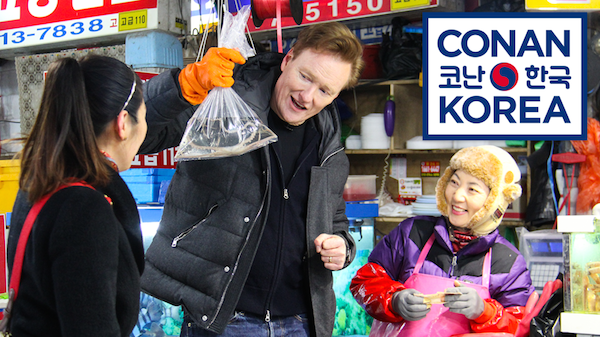