Sometimes, flipping channels at night here in Korea, I run across a show about Youtubers. Each episode features three different creators of online video content (or kontencheu, as it’s commonly rendered in Konglish) and documents each of them making a representative episode of their series. The host comments on the footage together with the vloggers, asking questions and making the occasional joke to complement the barrage of onscreen text and graphics that characterizes the modern TV aesthetic here. Some of the guests do cooking shows, some do comedy shows, and some go in more idiosyncratic directions. (The 29-year-old pharmacist who painstakingly recreates K-pop music videos, entirely by himself in his small room down in Daegu, comes to mind.)

Seeing this show reminds me how much television Korea makes — I haven’t watched even 10 percent of the channels in my cable package — as well as how much internet video it makes. When the world hears about Koreans broadcasting themselves, it usually hears about things like meokbang (먹방), those live streams of young people eating large quantities of food that made Westerners scratch their heads a couple years ago. But the society of screens cannot live by ingestion alone, and Korean vlogging has grown capacious enough to accommodate more esoteric pursuits, up to and including the reading of books. America has its book vloggers as well, of course, but none of them seem to have reached quite the proportional level of fame quite as quickly as, say, Kim Kyeoul (a name she translates as Winter Kim, which doesn’t exude the same hippie-parents vibe in Korea as it would in America), creator and host of the Youtube channel Winter Bookstore. 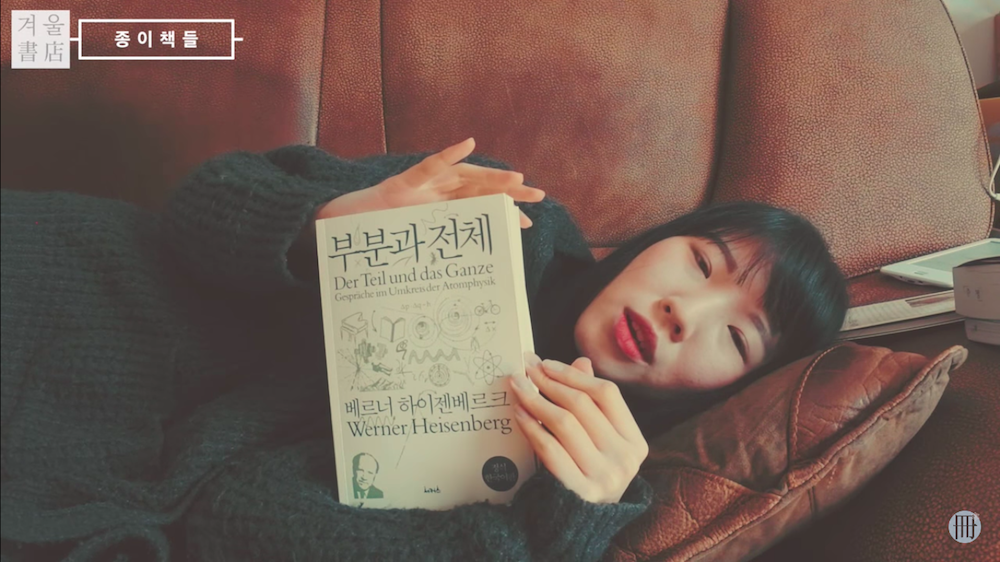 Kim has put up more than 120 episodes since she started Winter Bookstore at the beginning of last year, most of them shot in front of her filled-to-capacity bookshelves, all of them dealing with one subject or another related to books. She leads tours of those bookshelves, she gives reading recommendations, she describes her own reading methods (not neglecting such details as her preferred style of marginalia-making and which brand of coffee-cup warmer she uses), she compares translations of foreign books and electronic reading devices, she reads sections of books out loud (including my personal favorite Los Angeles novel, Christopher Isherwood’s A Single Man), she goes to publishers’ sales up in Paju Book City. Occasionally an episode crosses over with another cultural vlogger’s series, as when she gets together with a movie specialist to compare and contrast Stephen King’s The Shining with Stanley Kubrick’s version, or Do Androids Dream of Electric Sheep? with Blade Runner.

All this seems to have made Kim quite influential in Korea’s book culture, one robust enough to have also given rise to any number of book festivals (including the Seoul International Book Fair and Wow Book Festival, to name just two of the ones at which she’s made videos), book podcasts, bookstores chain and indie, and book club-supporting book cafés. She streams live multi-hour Q&A sessions for her endlessly curious fans. She gets invited to give talks with some frequency and, earlier this year, even published a book of her own called The Happiness of Reading (독서의 기쁨). As a twentysomething woman, she’s also a demographically representative figure in that culture: whenever a new cultural trend comes to sweep through Korea —  literary, culinary, social, or what have you — the young ladies almost always get to it first. Though I’ve never actually seen her with one of those Instagram-popularized London Review of Books tote bags on her shoulder, I can easily imagine it.

Then again, Kim might consider the LRB tote a bit basic, given the much more literarily referential ones she’s received as premiums from her membership in the rewards clubs of various publishers and bookstores. These she opens and evaluates up on camera to the delight of her audience in her own version of that already tried-and-true Youtube form, the unboxing video. Winter Bookstore also features the occasional “haul video,” produced whenever a box arrives with the fruits of her latest book-shopping binge. Without even getting too deep into her love of fountain pens (though most of the ones in her collection, she insists, came as gifts), all this might seem to justify a common critique of cultural and intellectual pursuits in modern Korea: that they have less to do with substance and mastery than with style and consumption. 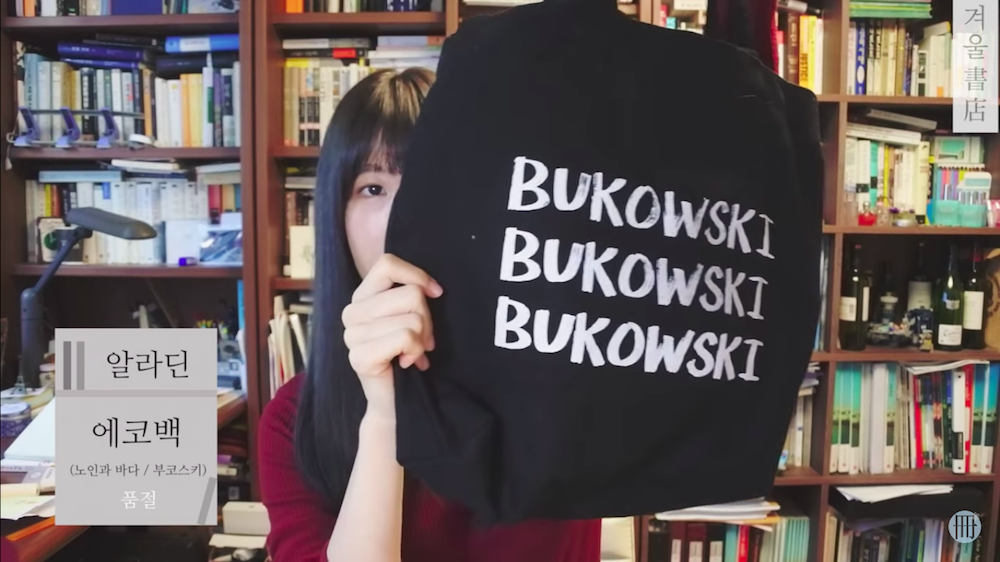 I wouldn’t say that charge quite sticks to Kim herself, who does keep things light (a recent episode finds her comparing the thinnest book on her shelf to the thickest) but whose reflections also sound like those of a serious reader, if a young one. Her tastes seem to incline toward dystopian fiction, Western philosophy, and writers like Milan Kundera, Gabriel García Márquez, Jorge Luis Borges, and Friedrich Nietzsche (whose branding as a self-help writer in Korea she rightly disdains). But Winter Bookstore has less to do with any type of book in particular — a contrast to the fearsomely obsessive degree of specialization practiced by the self-made cultural critics of America — than with reading itself, still seen here as an improving practice with solid, common points of reference. What reflects on more lamentable Korean attitudes in general is how few originally Korean books Kim covers and how much of a preference she shows for foreign works, especially Western ones.

But then, a Westerner never does quite get used to the references to Western culture made in Korea, neither to the frequency of the references nor to the range of items referenced. (Naturally, Demian comes up in some of Winter Bookstore’s episodes, thought not as many as one might expect.) And whatever the source of the reading material, reminders of the seemingly mainstream enthusiasm for reading and its accoutrements here do come as something of a pleasant surprise. Residing at the intersection of the print and digital ages, produced for audiences long since used to consuming online content in every possible context, and exploring the most solitary of pursuits in a highly public fashion, a Youtube show like Kim’s reflects much about the cultural situation in Korea by its very nature. But when will she put out her own line of tote bags?

My Favorite Kind of Korean Podcast: The Book-Reading Show 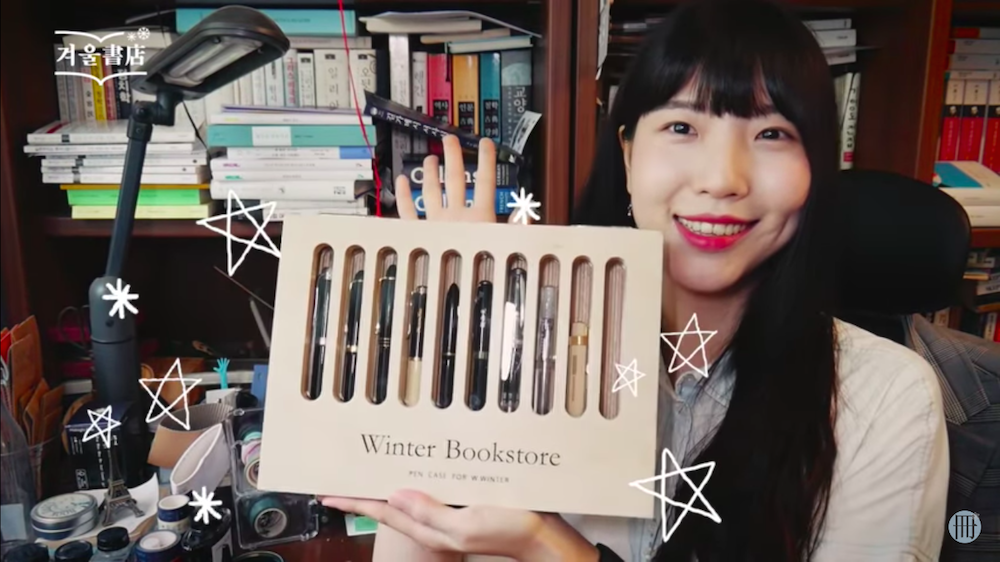