Though I’ve lived in Korea only a few years, I sometimes fear I’ve already lost sight of the culture around me. When visiting foreign friends bring up sights that strike them as notable or even shocking, I increasingly have to admit that they no longer even register in my consciousness. Though I headed off the brunt of initial culture shock by studying the Korean language and living in Los Angeles’s Koreatown for years before ever visiting Korea, certain things still jumped out at me on my first trip here. The fearsome power of trends, for instance: as soon as a certain article of clothing gains popularity, you’ll see it on the streets of Seoul many times a day, every day. Every society has its fads, but the degree of speed, breadth, and regularity of adoption here boggles the Western mind. As a Korean-American friend once wondered aloud, “How do they get the memo?”

At this point, though, life in Seoul has dulled my sensitivity to these trends — in not just clothing but music, design, personal electronics, and much else besides — that wax and wane on a monthly and even weekly basis. This despite considerable effort, deliberate and otherwise, to retain my outsider’s perspective by keeping a foot in current Western culture. I do it primarily by reading magazines: not just those I write for like LARB, but others like the New Yorker, the New York Review of Books, and the London Review of Books as well. To that last I actually only started subscribing while living in Korea. I’d expected to purchase a digital-only subscription, as I’d done with the others, but from what I could tell the LRB offered no such thing, insisting on accompanying my online access with print issues mailed fortnightly all the way to my home in Seoul. 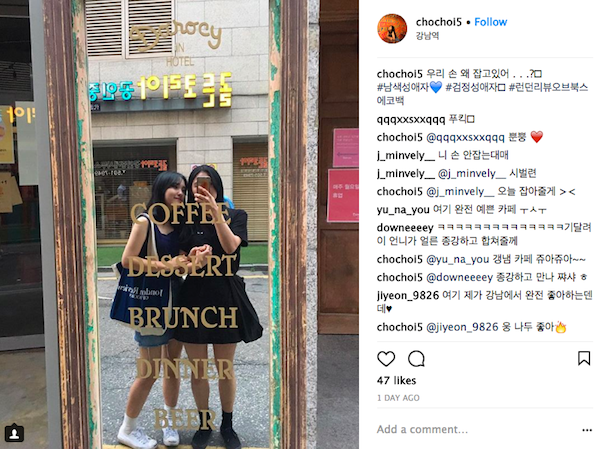 Maybe the regular arrival of each paper LRB, two weeks after its content comes available on the site, primed me to notice its tote bags. Not that I made too much, earlier this year, of the first 20-something Korean girl I spotted on a train platform with one on her shoulder. For all I knew she’d brought it back to Seoul as a souvenir of an afternoon snack at the London Review Cake Shop while on vacation in the English capital — or even a year of study abroad there. And it wasn’t impossible that she actually subscribed, probably out of the same kind of aspirational English-reading impulse that gets parents enrolling their young children in after-school academies that force them to read the likes of Time magazine. (I myself occasionally pick up esoteric Korean literary journals on the same principle.)

But then, over the past few months, I started spotting more and more young ladies with LRB totes, to the point where they’d come into view at least once per week. Out of sheer curiosity, and considering myself in some sense a representative of the magazine’s readership, I considered striking up a conversation with the next one I saw — not the done thing in Korean public spaces, though sufficiently ignorant Westerners get a pass on flouting most social taboos — to find out how she got it. Who knows? Maybe reading the LRB had somehow become one of these powerful Korean trends, at least among culturally aware collegians. I kept in mind memorable recent articles to which I might steer the conversation. Perhaps she’d care to discuss John Lanchester’s 9,000 words on Facebook’s business model? David Bromwich’s 10,000 words on free speech? Andrew O’Hagan’s 60,000 words on the Grenfell Tower fire? 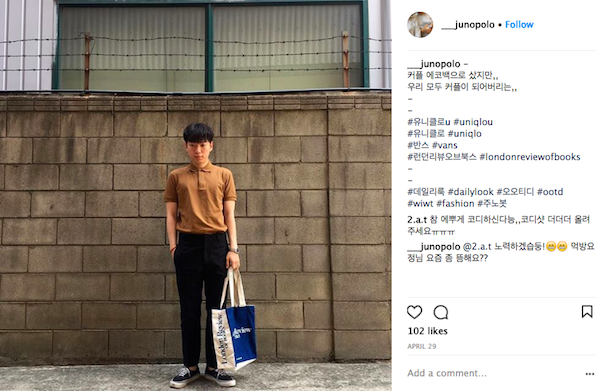 Then I saw an article in New York (one of the few magazines named after a major Western city to which I do not yet subscribe) by Katy Schneider and Lauren Levy. “About a year ago, stylish, young Korean women began visiting the London Review of Books’s Bloomsbury bookshop in droves,” they write. “They weren’t Jenny Diski fans — rather, they were after the canvas tote bags for sale by the register. Then the phone calls started: people from South Korea asking to buy hundreds of the bags at once.” The store’s event coordinator looked into it and “found that the Korean tag for the bookstore on Instagram turned up pages and pages of photographs of the bag slung over chic shoulders: Evidently, the shop’s nondescript tote had become a thing.” I’ve come to understand that what becomes a thing in Korea usually does so through Instagram, the photo-oriented social-networking service popular nearly everywhere, but here especially.

Nine times out of 10, Instagram turns out to be the delivery system for what my Korean-American friend called “the memo.” Its effectiveness has to do with its thoroughly visual nature, an especially addictive property for users filled with anxiety by essentially textual platforms like Facebook and Twitter. That same quality makes it seem amusingly at odds with the LRB‘s dedication to long-form essays, most of them without so much as a single picture to accompany a social-media link. (The magazine does, however, have a presence on Instagram, and I’m tempted to use their #readeverywhere hashtag on a picture with one of my print issues at the DMZ. Or I would be if the place interested me.) But theirs aren’t the only branded totes to become big in Korea through Instagram, and not even the only branded totes to do so for reasons almost entirely detached from their original referent. I see Dean & DeLuca bags here and there as well, though they presumably came purchased from one of the market’s locations in Seoul. 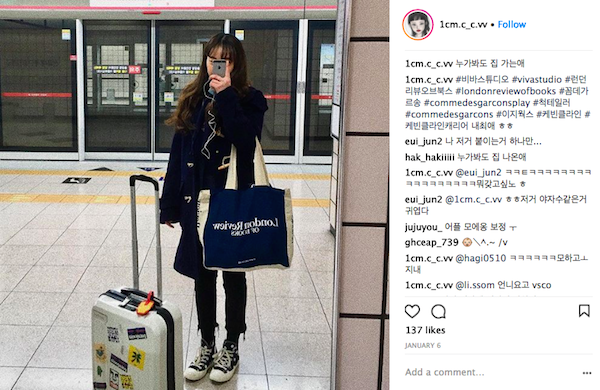 I have yet, however, to see the shoulders of Seoulites bearing the mark of public radio stations, friends-of-the-library groups, or any of the other organizations redolent of middle age and middle-of-the-road liberalism so deeply associated with the very concept of the tote bag in America. But then tote bags have a much shorter history here, as well as a completely different image. Koreans don’t even call them tote bags: they call them “ecobags,” seemingly a reference to their reusability or the recycled origins of their materials. More and more Korean brands offer ecobags of their own design; I even received one last week from Peter Cat, the cafe where my Haruki Murakami reading club meets, after we successfully completed all his novels. Most of its members, not coincidentally, fall into the same demographic as the LRB tote Instagrammers: female, college-educated, in their twenties, and possessed of experience traveling if not living abroad.

They, as one sees at every one of Seoul’s latest cafés, restaurants, book shops, and film festivals, lead the cultural charge in Korea, Instagramming and hashtagging as they push ahead, with most men and members of the older generations lagging far behind (though their boyfriends follow somewhat closer). Among this group the trend of LRB totes, especially those of the understated blue-and-beige design, has happened at an unusually slow burn. Still, everything that rises to popularity here must eventually fall out of it: that holds as true for the appealing items as it does for the unappealing ones. (The white patent-leather Birkenstocks on half the feet in Seoul the summer I first visited come to mind.) When the sun sets on the LRB ecobag, what will replace it? I happen to know another review of books, based in a city with a much higher profile in Korea than London, that could well put their own forward — the trend-setters will just have to become annual members first. 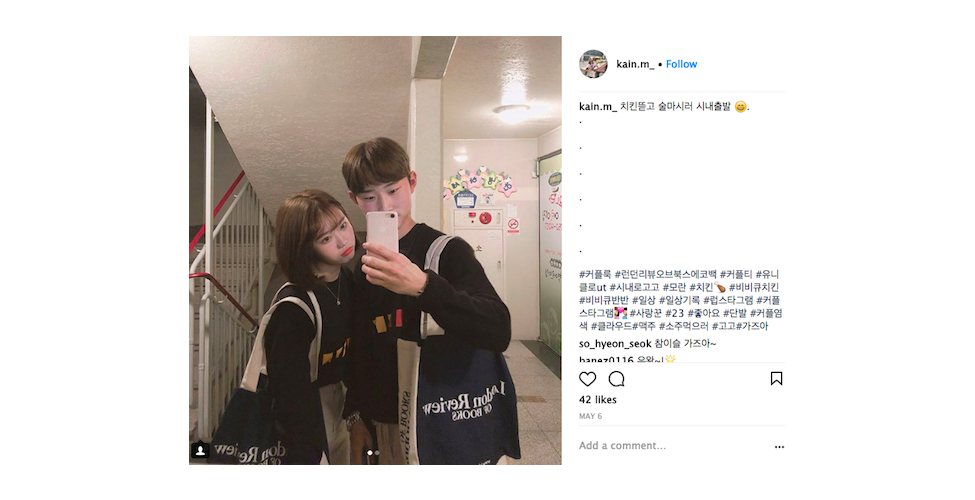