If you want to understand a society, watch its game shows. The principle behind that advice has come to light with the advent of such entertainment sources as the Game Show Network, on which Americans can catch clear, sometimes too-clear views of the foreign societies that are Americas of decades past. You don’t stay tuned in to a 1970 broadcast of Sale of the Century because you care about who takes home the brand new Dodge Dart Swinger; what compels you are the aggressively trend-adherent aesthetics, and even more so the personalities of the everyday people who appear as contestants. Not subject to the same behavioral standardization as television professionals, they present and express themselves in a manner that exudes the place and time in which they live, all the more faithfully for its inadvertence. Hence the value, should you find yourself living in a genuinely foreign country, of finding a game show to follow.

Having found myself living in the genuinely foreign country of Korea, I’ve lately also found myself watching Our Language Battle (우리말 겨루기), a game show that has aired every Monday evening on KBS since 2003. Though it occasionally invites celebrities, and this past July even brought on members of the National Assembly, it usually pits four everyday Koreans (or four teams of two, usually family) against each other in a test of their knowledge of the Korean language. It begins simply enough, with the contestants buzzing in to guess the words or phrases that fill in a crossword-style board, but soon the challenges get dramatically harder: separating folk spellings and regional variations from the officially standard, filling in words missing from old television and newspaper clips, and — most difficult of all, even for contestants who otherwise dominate the game — properly re-spacing a text whose words all run together. Would this make for a decent game show in English? Everyone in America knows at least one or two people near-religiously committed to filling in crossword puzzles, but that enthusiasm hasn’t translated to competitive television. Spelling bees feature in the grade-school memories of every American, but when held at the national level appear to anyone outside the adjacent industries as little more than objects of faintly disapproving fascination. An American who puts too much energy toward building a wide vocabulary risks being seen as pretentious, and a robust interest in usage can easily earn one the even deadlier label of “grammar Nazi.” This in contrast with France, about whose perfectionistic language culture I wrote about in a LARB piece last year. “The thing that’s tough about French is the thing that’s exemplary about French, which is that French speakers across the board are language nuts,” write Julie Barlow and Jean-Benoît Nadeau in The Bonjour Effect, one of the books under review.

Are Koreans also language nuts? Maybe compared to Americans, but certainly not across the board like the French: except in cases of potentially catastrophic misunderstanding, a Korean-learner’s mistakes will seldom if ever be corrected on the streets of Seoul, the exact opposite of what a French-learner will experience in Paris. (A French journalist passing through Korea last week explained the behavior of his countrymen this way: “They’re trying to save you from being corrected by the next person.”) But then, Seoul also boasts an impressive museum dedicated to hangeul, the Korean alphabet (“the world’s most scientific writing system,” one often hears) at which I most recently saw an in-depth exhibition on the history of Korean dictionaries. The assembly of a Korean dictionary under Japanese occupation provided the basis for last winter’s feature film MAL-MO-E: The Secret Mission (말모이), and this summer saw the release of The King’s Letters (나랏말싸미), in which Korea’s biggest-name actor Song Kang-ho portrays 15th-century ruler King Sejong the Great at the time he first ordered the creation of hangeul. And then we have the many contestants on Our Language Battle, some of whom have devoted considerable amounts of time and energy preparing to compete. Those who successfully defeat every linguistic challenge (including the spacing one) and attain the title of “Master” come to only about seven percent of all participants, and among them are a disproportionate number of middle-aged housewives, who can apparently make the time to read thousand-page dictionaries in their entirety, and civil servants, who labor under a professional obligation to use the nationally approved terminology. What might at first seem like one of the easier game shows on Korean television — its material being not logic or trivia, after all, but “our language” — turns out to be quite possibly the hardest. Three years ago I wrote an essay here asking why Korean is so hard, and I meant hard for Westerners, but a show like this reveals that it can be just as hard for Koreans themselves.

The idea of a popular language-themed television game show in America is implausible enough, but imagine one on which educated people struggle to determine the correct spellings of words, and not especially obscure words at that. The nature of the challenges on a program like this reflects the nature of the Korean language, with its relatively huge proportion of often spoken but seldom written onomatopoeia (seen even in appliance manuals, a well as their English translations), its long-entrenched regional dialects (people from Seoul and Busan, two cities only as far apart as Los Angeles and San Francisco, sound different enough to cause frequent moments of mutual unintelligibility), and its recent conversion from a Japanese-like unspaced mixture of the phonetic alphabet and logographic Chinese characters to, in most settings, hangeul and nothing else. Foreigners living in Korea could do much worse for educational viewing than Our Language Battle, introducing as it does a variety of ordinary Koreans while simultaneously teaching the finer points of the Korean language by showing those ordinary Koreans grappling with them. It’s also unexpectedly gripping. Despite never having been the type to get worked up over game shows, I do occasionally shout at the screen while watching this one, most loudly on those rare occasions when I happen to know the answer a contestant can’t seem to come up with. But on a good day I can only answer one out of every four or so questions at all, the usual number being more like one in ten. But any language-learner, especially one residing in the country of the language they’re learning, knows the thrill of getting an answer right that they wouldn’t have gotten right before. They also know what it feels like to make the subtle shift from focusing on the few parts of the language they do understand to focusing on the parts they don’t, which for the native-speaking contestants on Our Language Battle, with their family members waving handmade signs of support in the audience, can make the difference between taking home big money (or at least modest money, drawn as it is from television license fees) and taking home pocket change.

Expatriates take their joys where they can find them, and Our Language Battle has become one of mine — though I like to think I’m on track to avoid the embitterment that emanates from so many long-term Western residents of Korea, not least because I regard the language as an object of fascination and admiration rather than as an irritating impediment to communication. Still, I do deal with the occasional frustration here, most often in the moments where Korean society seems most eager to neglect its mother tongue in favor of a mangled “global English.” Korean cultural pundits, mostly on the mature side, do write plenty of books and articles diagnosing a certain withering due to disuse of the richest parts of the language. But the regular sight of regular people putting their Korean-language knowledge to the test is a heartening one, and a reminder of one of the main reasons I came to Korea in the first place. When each and every day here I try to determine my next step toward mastery of the Korean language, it’s strangely encouraging to see that, even for the most dictionary-memorizing of native speakers, mastery is unattainable. 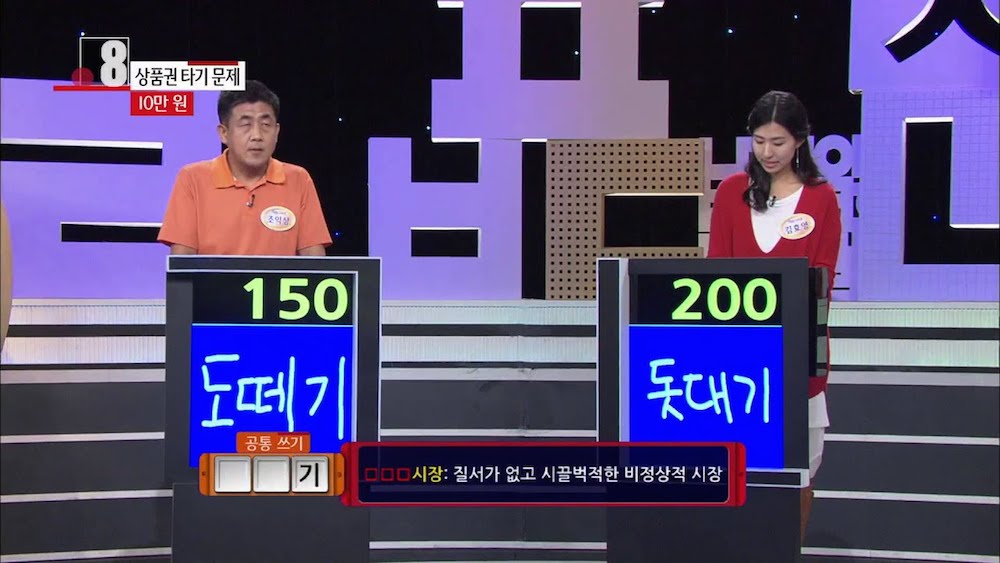