Foreigners living in Seoul seldom travel around the rest of the country as much as they’d like to, and Koreans living in Seoul seem to do it even less. Hence the popularity of a television program like Travelogue Korea (한국기행), which brings the remote island and mountain villages to Seoulites rather than the other way around. Part of the problem has to do with the sheer capital-centricity, unrivaled in Japan or even England and France, that makes Seoul the city where nearly everybody wants to live and almost nobody needs to leave. (I used to make fun of that, before I realized that I describe everyone in America as living in either Los Angeles, New York, or “someplace weird.”) But though Korea may not have any other cities in Seoul’s league, it does have other big cities, all conveniently connected by the high-speed KTX train, each possessed of its own distinct history and culture.

None has a culture more distinct than that of Busan, Korea’s second-largest metropolis. Located on the southeast coast, almost as far as a South Korean city can get from from Seoul and still be on the peninsula, Busan long served as the country’s main entrepôt, giving it a reputation as an international sort of place even in the centuries pre-modern Korea spent as a “hermit kingdom.” Historically, many of the arrivals into Busan came from nearby Japan (a distance one can now ferry across in three hours), and that cultural influence still manifests in the accents of the locals. I can attest to the conspicuousness of the effect Japanese sounds have on Korean speech; I happen to study Japanese as well as Korean, and speaking the former has had enough influence on the way I speak the latter that a Korean tells me I “talk like a Japanese person” at least once every few weeks.

Not that my Japanese skills, such as they are, have helped me get much of a handle on Busan-style Korean. Busanians speak with not just their own accent but in their own dialect, or saturi (사투리), which at its richest can leave Korean-speakers — even native Korean-speakers — accustomed to the relatively clear version of the language spoken in Seoul in a state of incomprehension. To put this in geographical perspective, Seoul and Busan lie about as far apart from each other as do Los Angeles and San Francisco; Angelenos and San Franciscans may not see eye-to-eye on everything, but it’s impossible to imagine ascribing their communication breakdowns to differences in regional speech alone. But then, California hasn’t had the oft-referenced “5,000 years of unbroken history” in which the various cultures within Korea have developed and differentiated.

As one of the very few areas of the South not overtaken by the Northern army, Busan briefly served as the capital of the Republic of Korea during the Korean War, a role it metaphorically reprised a couple of years ago in Yeon Sang-ho’s zombie-apocalypse picture Train to Busan (부산행). But not long after regaining that title did Seoul become the center of Korean wealth, modernity, and internationalism, leaving Busan as just another place to have come from. To many Koreans, a Seoul accent came to betoken savvy and sophistication, while any of the country’s other regional accents, let alone a full-on Busan saturi, marked one out as a hopeless bumpkin. This despite the ongoing development of Busan itself, which with its six beaches, its slick high-rises, its respectable mass transit system, its robust food culture, and its world-beating film festival (not to mention its possession of the largest Korean spa in the world), would if transplanted to America easily rank among its most splendid cities. 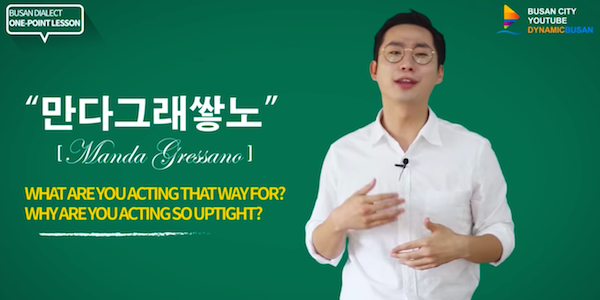 I’m a fan of Busan myself, I need hardly add, and even considered living there when first I moved to Korea. But the attractions of Seoul, perhaps inevitably, proved too strong — as did its opportunities, which keep many Koreans and foreigners alike from living their fantasies of setting up home outside the Seoul metropolitan area — and I haven’t taken the time to visit Busan even once since settling in the capital nearly three years ago. Or at least I hadn’t until this weekend, which provided as clear an opportunity as any to head down south, if only for a brief weekend trip. Naturally, apart from booking accommodations and KTX tickets, all of my preparation focused on Busan’s saturi. Luckily, learning materials exist on the internet, including a couple of amusing videos with English subtitles produced by the city of Busan itself.

“Owing to its unique intonation,” says the instructor as he stands before the same green chalkboard seen in every Korean educational video, “the Busan dialect can sometimes sound exotic.” People also describe it as “colorful,” a word that, like “brusque” or even “brash,” applies to Busan in many other senses as well. Busan’s saturi can sound distinctively macho, reminiscent of the dialogue in Hong Kong gangster films, and the speech of Busanian men has certainly come back into vogue in the 21st century. It began with films like Busan-born director Kwak Kyung-taek’s semi-autobiographical hit Friend (친구), released in 2001 and followed by a television remake and a sequel, and continued with dramas like Reply 1997 (응답하라 1997), set in the Busan of that year. First aired in 2012, the series did its part to restore not just respect for Busan’s saturi but for Korea’s recent past which, during the harsh, hyper-developmental decades since the end of the Korean War, many Koreans had tried to cast off like a countryside accent.

Nobody is doing quite as much to represent Busan and its dialect to the world as Jeon Jung-kook and Park Ji-min, the two Busan-born members of boy band BTS, the closest thing K-pop has yet produced to a global phenomenon. “I need to learn this… for jimin and jungkook,” says a Youtube commenter on one of the city of Busan’s saturi-instruction videos. “All my ladies, put your hands up! if you watch this because u gotta understand what jimin and jungkook actually says,” posts another member of BTS’ fan base, known as the “ARMY.” Another advises caution: “My fellow ARMYs, let’s take a deep breath and stop thinking about Jimin’s satoori.” But though an old Korean saying advices “southern men, northern women” (남남북녀), the daughters of Busan, too, have charms of their own, as the Korea Blog’s own contributor Stefano Young discovered when he met and married one of them in the United States, an experience you can read about in the six-part series of essays he wrote here last year.

More recently, Stefano has launched his own online Busan Dialect Guide, which breaks down Busan’s saturi into elements like its signature sounds, its new words, and its distinctive rhythm, stress, intonation, and tone. He has also created sections where you can hear Busan’s signature sounds in context as well as the words of real-life speakers. With all its materials clearly presented in writing as well as in audio recordings — and more materials sure to come — Stefano’s guide to Busan saturi should provide any student of Korean with a solid foundation on which to build. But after learning the basics, as with any dialect or indeed any language, nothing instills it as much as constant exposure, and whether that exposure most effectively comes from movies, television dramas, or BTS videos will depend on the inclinations of the individual student. Me, I prefer to take my linguistic absorption in the more natural, unpredictable environment of Busan itself, ideally while doing as the locals do: that is to say, while eating heaps of raw fish on the beach. I may not return to the capital with a much better comprehension of Busan’s saturi than I arrived with, but I certainly can’t call the time wasted. 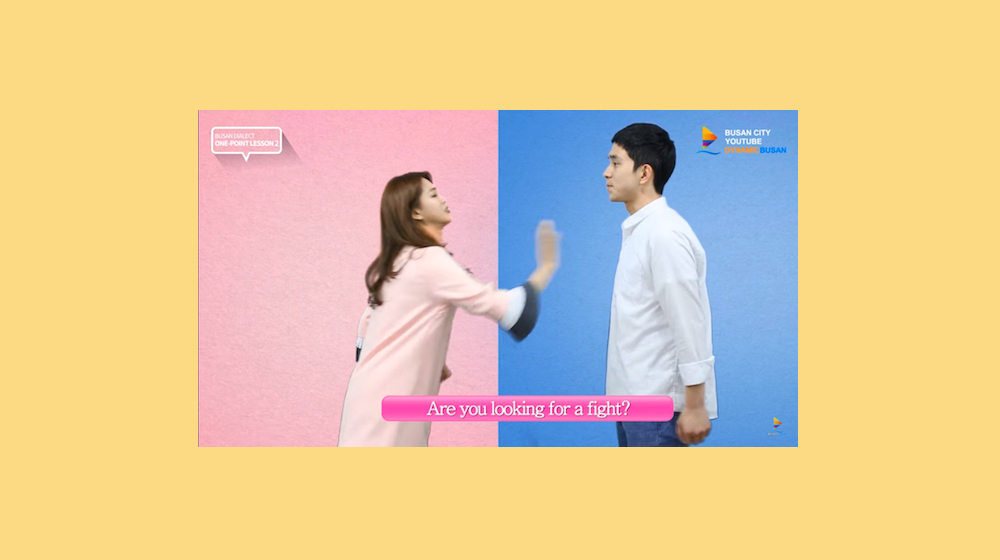