Stefano Young didn’t know the difference between Korea, China, and Japan until he was 23 — but then he met a Korean woman, learned to say “사랑해요,” and has studied Korean language and culture ever since. In 2017, the Los Angeles Review of Books Korea Blog ran a series of Stefano’s essays on everything from first visiting Korea to enduring nudity at a Korean health club to crashing in a Korean love motel, all excerpted from his memoir-in-progress Marrying Korean. Now that memoir has been published as an eBook by Seoul Selection, and Stefano has written this new post to mark the occasion.

I was startled to realize that I began writing about Korea approximately seven years ago, while wrapping up my dissertation on some technical aspects of a trending medical imaging technique known as “3D mammography.” I did my writing at the library because my office was located back in Arizona, a long desert drive away from the home my wife and I had chosen near her new job in Los Angeles.

The library was full of interesting characters whom I had plenty of time to observe as I considered how best to stitch together my years of research into one semi-coherent story. One guy had an old laptop out on the table in front of him, and he repeatedly smashed his fingers on the mouse button, clicking in a sort of rhythm loudly enough to draw my attention, but not loudly enough to compel me to do anything about it. A jacketed figure just sat slumped in his dark wooden chair, breathing heavily with his eyes closed. One day, another man sat facing a tall rectangular window to the street and practiced playing his bass guitar, the nearly silent strings making music in his large over-the-ear headphones.

I packed a lunch most days, and would go outside at lunchtime to claim one of the wrought-iron tables in the courtyard next to a small coffee shop, preferably a table protected from the sun by the building’s breezeway design. I ate my lunch with my laptop out on the table in front of me, enjoying the video companionship of my favorite comedians as well as some sparrows who hovered around, waiting for scraps.

Some days I bought a drink from the coffee shop. The older gentleman who ran the place had a disarming smile and bright eyes to go with his receding white hair. He saw me around enough times and started taking a kind interest in me when business was slow. He came over to my table and asked what I was working on, so I told him about my dissertation at a high level, which always made me feel like I was taking credit for curing cancer. He said he had a friend or nephew in tech at NASA. His wave and earnest smile comforted me whenever I packed up my things and passed by the coffee shop on my way back for another afternoon’s writing session.

While finishing my dissertation, I was also supposed to be figuring out what to do next. For my wife and some of my friends, the next step seemed to come find them first: Before long, they were being whisked to other states and offered adult-sounding job titles and salaries. I reviewed countless job titles on the online boards whenever I got tired of writing, but none seemed to fit. Maybe I’m not doing this right, I thought, giving up on the job boards and returning to writing for a while. As a byproduct of working on my dissertation for months, I rediscovered my taste for writing and a borderline obsession with uncovering the truth of what I’d done. (Fear of your PhD committee will do that to you.) And at the same time, I learned there were things I wanted to write about besides breasts and x-ray physics.

I started with a “fictional” work about Korea consisting of mostly true anecdotes. There was a plot involving bunkers and the war, mostly to assuage the guilt I felt for already wanting to write a memoir in my late twenties. The stories sat mostly untouched for a few years while I took a new job and answered — for a time, at least — that heavy question: How shall I spend the rest of my life? All the while, I continued my study of the Korean language with online resources, evening classes in Koreatown, and regular Facetime sessions with my new in-laws.

In one of my Korean classes in Los Angeles I happened to meet Colin Marshall, now the main writer of the Korea Blog and person to whom I owe the most for turning my stories into a book. He saw some parallels between my story and a long out-of-print memoir titled Lost in Seoul and he helped inspire me to write a cross-cultural love story for the 21st century. These days I’m mostly occupied by thoughts of my Korean-American daughter. She’s three, and she’s already speaking and mixing languages like I never imagined. The other day she was excited to go to the “suyeong pool,” a clever mash-up of the Korean suyeong jang and its English equivalent, “swimming pool.” Her natural fluency in both languages puts me to shame.

On my latest visit to Korea, I overheard one of my wife’s family members saying that I struck her as being “totally Korean.” That’s not true, of course, and I don’t believe it’s true even in the “culturally Korean” sense. But her comment touches on the theme of this book, and if you’re curious to know how an American of fully-European descent comes to be labeled “Korean,” I encourage you to read my story. Again, many thanks to Colin and to Seoul Selection for the finished book!

Korean 101 (or, How to Win Over Your Girlfriend in a Semester or Less)

The Korean Health Club: A Cultural Trial by Fire, Ice, and Nakedness

In Korea, All You Need Is Love (Or a Love Motel, at Least) 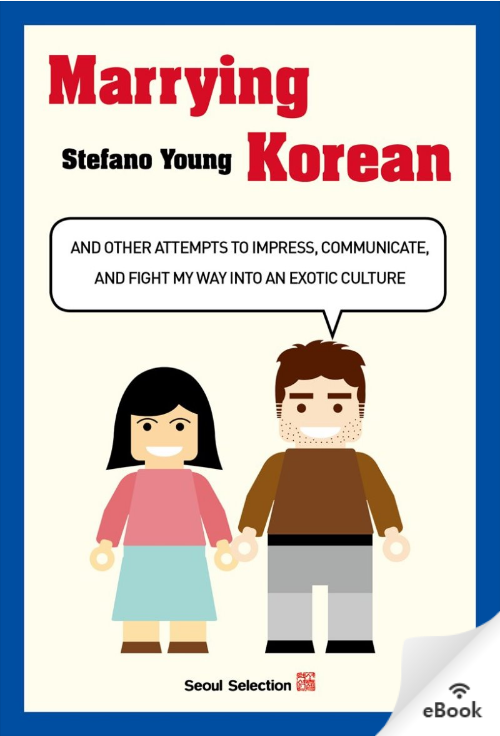