Stefano Young didn’t know the difference between Korea, China, and Japan until he was 23 — but then he met a Korean woman, learned to say “사랑해요,” and has studied Korean language and culture ever since. In an occasional series starting this week, the Los Angeles Review of Books Korea Blog will present his essays on his ever-deepening experiences with Korean life, culture, and family.

I stood up from my aisle seat in the darkness and made my way towards the bathroom at the rear of the plane. There was someone waiting there in the galley, a white guy who looked about my age, maybe younger, with scraggly brown hair. Since we were two of the only non-Asians on the flight, we started talking: I learned that he attended Cal Berkeley and, like me, was also dating a Korean girl, but they were not traveling together. He had been to Korea before and was returning solo to pay her a visit, so I had to pick his brain for advice, confessing that it was my first time visiting Korea with my own girlfriend.

“You have to try the bingsoo,” he replied. I had no idea what bingsoo was, and he explained that it was a kind of dessert. The bathroom door opened, and he slipped inside. Another bathroom stall opened up, and I never saw my white friend again.

We landed at Incheon International Airport and made our way through the efficient customs line and on to baggage claim, where luggage carts were thoughtfully provided free of charge. The whole arrival experience, in fact, was quiet, orderly, and rather pleasant. We exited into the arrivals hall without any fanfare, because my girlfriend Garam’s parents were on the other side of the country in Busan, another five hours by bus from the airport. Garam offered to buy me some food from the convenience market in the arrivals hall, and while she did so, I sat on one of the rows of benches arranged to face an enormous TV with SAMSUNG emblazoned on the side.

Garam returned with a triangle-shaped, seaweed-wrapped rice ball, and a short, rotund beverage container full of banana-flavored milk. She handed me the ball and explained how to open it: you were supposed to pull the tab marked “1” on the the back of the plastic wrapper which bisected the triangle, then you gently tugged on the corner marked “2” to remove half of the plastic wrapper, pulling next on the corner marked “3” to remove the rest of the wrapper. I followed the instructions, but some of the seaweed ripped during step two, and I lost another chunk of seaweed in step three. The rice ball itself, however, stayed intact, and it was delicious. There was a beef bulgogi filling in the middle, and I wondered how it was stuffed in there without leaving a trace of an incision anywhere on the outside.

Pleased with my triangular snack, I tried the banana milk, which made me question why it had taken me until the age of 24 to discover such a taste halfway around the world from my native country. It even came with a straw to puncture its foil lid, hearkening back to the Capri Sun juice packs of my childhood. If this kind of convenience-mart fare can be had for a measly few bucks American, I thought, I think I’m gonna like it here. We finished our snack and wheeled our overloaded luggage cart outside, into the frigid winter evening air, to find the Busan-bound bus stop.

The long bus ride was quite comfortable, thanks in part to the large black leather seats that reclined more than the airplane’s. A TV in the front of the bus showed Korean dramas, distracting me from my mission to get some more sleep, as did the nighttime cityscape through the windows. With my elementary knowledge of hangeul, the Korean alphabet, I could read the passing signs on the buildings phonetically, but had no idea what they meant. After a number of them my head started to hurt, and I stared instead at the long line of traffic through the front window of the bus, taillights snaking all the way to the horizon like a bright red neon river through the dark.

Out the side window, another red light caught my eye: that of a bright red cross protruding from the top of one of the many utilitarian buildings outside. I asked Garam if it was a branch of the Red Cross, but she said the red crosses were used by the Protestant churches in Korea. As I kept watching out the window, they turned out to dot the cityscape with a surprising regularity. They’re really proud of their Christianity, I thought. I knew that my girlfriend was raised Catholic, but I didn’t imagine Korea as a whole country with Christ fever.

I slept for most of the ride, except for a short stopover we made at a colorful highway rest area filled with various displays of mysterious food items. In my bleary-eyed state, I just wanted to use the restroom, where I found nothing out of the ordinary except a bar of soap impaled on a spit, kind of like a rotisserie chicken. I deduced that you were supposed to get some soap by stroking the bar like an udder.

The bus pulled into Busan station well after midnight. All the shops lining the bus arrivals corridor were closed, but Garam’s parents were waiting anxiously for us and greeted us warmly. I had asked Garam how to address her parents in Korean, and she told me to just call them omonim and abonim, the respectful versions of “Mother” and “Father.” I asked if I could do that even though we weren’t married, and she assured me that it would be weirder to address them by their names. When we arrived at the car, Father quickly loaded our luggage into the trunk, taking the bags right from my hands.

We pulled up to the front door of the Hyundai Apartments to unload our baggage, then took the elevator to the sixteenth floor. Garam’s mother slid open the door handle’s plastic cover and entered a PIN number into a blue keypad, producing a pleasant series of door-opening beeps. Fancy. As the Koreans stepped one by one into the narrow entryway and quickly removed their slip-on shoes, I labored over my shoelaces, feeling like a culturally inept fool for taking so long. Each pair of shoes was placed neatly on a shelf in a plastic shoe rack, but only mine were so big that the toes stuck out of it.

The apartment was clean and cozy, with low ceilings and mostly linoleum floors throughout. Garam and her younger sister’s rooms had Western-style beds, while the parents slept on a mat on the floor in the master bedroom. Garam explained to me the Korean ondol heating system, whereby hot water under the floor radiates heat upward. The floor, being the warmest part of the house, would be where we spent much of our time.

I deposited my ugly eighties-style duffel bag into Garam’s childhood room while she and Mother got to work unpacking, although it was well past midnight. Garam had a large rolling suitcase filled with clothes individually wrapped in the thin plastic sheaths you find at the department store to prevent them from getting wet or dirty. She had also brought some food gifts from America either unique or cheaper than the Korean equivalent: wine, cashews, Nutella, and even tequila, which Mother had developed a taste for in college.

While Garam and Mother squatted around the suitcase unwrapping items from America, Garam’s father motioned me to sit with him on the floral-patterned floor mat in the living room. There was a couch, but it looked as if it was used only sparingly. He offered me a beer and I accepted, so he brought out two ornate glasses of a Korean brew on a plastic tray along with a small bowl of anju, or the requisite Korean drinking snacks. The beer was ice cold and refreshing, but the alcohol reminded me of the long journey I had taken to get here, from getting up the courage to talk to the beautiful girl in the graduate dormitory to taking her on countless dates to watching hours of Korean dramas to enrolling in Korean classes at the local community college: it had all led to this moment, and I was anxious.

When I’d finished my beer, Mother and Father encouraged me to go to bed two or three times before I finally acquiesced and started to wind down. I went to the bathroom, which had not just colored foam tiles on the floor but a foam toilet seat in pink. The sink and tub were old but immaculate, and after I finished with the sink Garam explained to me that her mother kept a small towel, next to the hand towel, for wiping it after each use. Wiping the sink? I reminded myself that I grew up in a different country and a different household, and now it made sense how the bathroom fixtures had remained immaculate since Garam was a child.

I said good night and retired to Garam’s old twin bed, pushed against the wall in a small room that also contained a floor-to-ceiling bookshelf, a computer, a study desk, and a metal rack on wheels for hanging clothes. Above the headboard hung a picture that Garam had painted of her grandfather, wearing a red golf shirt with a handsome smile before a beautiful mountain backdrop.

Grandfather and Grandmother had slept on the floor with Garam when she was a baby, while Mother and Father slept in another room of the house. (Mother and Father would later do the same with our daughter, their granddaughter.) Garam once told me a story about the time when Grandfather was driving her and her aunts home from a visit to the family gravesite, but little Garam declared that she wanted to stop at the amusement park first.  Her aunts clamored that they had lots of work to do and told Grandfather to keep going, but Grandfather pulled the car over and instructed them to get out and take a taxi home so he could play with his granddaughter. Garam told me how she was his favorite grandchild, and how he had passed away, suddenly, from a stroke.

I fell asleep staring at the glow-in-the-dark star stickers up on the bedroom ceiling which, amazingly, had retained their glow after two decades. 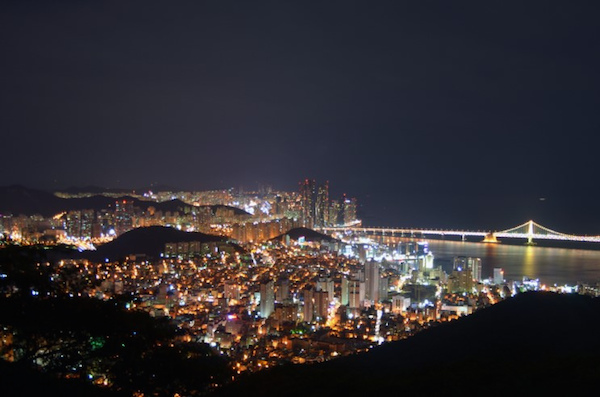