Waiting to step off a bus here in Seoul not long ago, I got an idea for not just a tweet but a whole Twitter thread. As usual, I had just tapped the exit-door reader with my transit card — but strictly speaking, it isn’t a transit card of the kind used in Los Angeles or New York, one you have to keep topped up with periodic money refills at a machine. It’s just my regular bank-issued debit card, the one I use to buy everything. It also works not only on all the buses and in all the train stations in Seoul, but on all the buses and in all the train stations everywhere in South Korea. Having by now grown used to that convenience and other, even more convenient conveniences besides, I got to wondering whether they’ve collectively made it impossible for me to live outside Seoul, let alone in any of the comparatively ramshackle cities of the West, ever again.

Right there at my bus stop, I began a thread of “things Seoul has that give me serious reservations about ever living in any other city” as follows:

Immediately after tweeting about my transit-compatible debit card, I thought of another point I always emphasize when describing life in Seoul to people back in the West: that all subway stations have not just bathrooms, but decent bathrooms at that. I’ve previously called the ability to use the bathroom in subway stations the most telling indicator of urban civilization, but using the bathroom in coffee shops also reveals a great deal about the state of a city. Before moving to Seoul, I was as used to holding it in until reaching street level (and most often longer than that) as I was to asking nearby strangers in coffee shops to watch over my computer before getting up to use the facilities. If I asked anyone to do that in Seoul — a city where public property crime has fallen as prosperity has risen, which stands to reason — I’d come off like some kind of paranoiac.

“It’s a good list,” replied one of my fellow Twitter-using Western expatriates, “but it seems to mainly revolve around you taking the subway and drinking coffee.” Yet the lives of so many urbanites everywhere revolved around those same necessities, and it now seems to me that no city that fails to provide them, and in abundance, can compensate for that lack. Of course, a list like this also risks drifting from its ostensible subject, devolving into a litany of complaints about the fear of crime, layers of filth, and thoroughgoing inconvenience that still characterize American cities even all these decades after their hollowed-out mid-20th-century nadir. Many Koreans emigrants to the West insist that Seoul suffers terribly from all those conditions — but then, they also tend to end up living not in the West’s cities but its featureless suburbs.

Not that America divides city and suburb quite as sharply as does Europe or Asia: even in the most major cities of the United States, one often encounters buildings given over to a single use or surrounded by moat-like acreage of parking. But as I continued to add more tweets to this thread, I thought of other characteristically Western urban phenomena that I don’t see in Seoul, most notably the tendency for every transition a neighborhood makes to spark bitter sociopolitical conflict. In Seoul violent clashes do erupt between developers trying to demolish parts of the city and rebuild them in taller, more modern, and much blander forms, but you don’t hear of protestors smashing the windows of coffee shops because the people who run them look like “gentrifiers.” (And in fact the term “gentrification” as often used in Korean, lacking most of its American connotations, seems to mean little more than the arrival of a better class of convenience stores.)

As the thread grew, it drew attention from various sources, not least Arius Derr, host of the podcast Settlers of Seoul. Running since 2017, the show features long-form interviews with expatriates in Seoul not relegated to the usual occupations, and the subject of life as a foreigner in the Korean capital fit nicely into purview. In our interview, Arius asked me about not just Seoul’s urbanistic strong points but touched on some of the objections the thread had received as well. Many of those objections merited little consideration, to my mind, based as they seemed to be on a perception of a list of reasons everything in Seoul is good and nothing is bad — a curious failure of literacy, given how many of the objectors were journalists themselves. Other comments, such as arguments about the danger a city like Seoul poses for women, gave me more pause, underscored as they seemed to be by recent scandals like Burning Sun.

But do those who left the comments seriously perceive a higher level of female safety on the streets of New York, Paris, or London? The perception of Seoul as unsafe has its roots less in comparative violent crime statistics than it does in the notion that the surfaces of the city — looking so much more impressively developed than those of the erstwhile “first world” — conceal a society rotten to the core. A similar notion seems to constitute a premise of Korea Exposé, one of the more respectable sources of English-language writing on Korea to appear in recent years. When the site originally launched under the slogan “Showing Korea as It Really Is,” it came off as an attempt to counter the pro-Korea propaganda, in all its forms from tourism promotion to TV dramas, that glosses over this country’s less palatable realities. The danger of such a project is that arguing against propaganda necessitates first stepping into, and thus to an extent validating, the propaganda’s worldview — and in the case of Korean propaganda, implicitly crediting it with much more influence than it has.

Not long ago, Korea Expose’s Sheon Han mounted an intelligent critique of Seoul through one of its many newly opened attractions: the Starfield Library (별마당 도서관), a book-filled, atrium-topped, Instagram-ready space built in the middle of a Gangnam shopping center. “Starfield Library functions much like movie theaters inside suburban shopping malls,” write Han, “honeypots that draw customers first and then naturally lead them to other spending options inside the mall, providing an unconscious and unplanned segue from a cultural activity to a consumerist one.” This reading-themed yet reading-unfriendly environment “unabashedly symbolizes how capitalistic desires are being imposed even on something as innocuous as a library in contemporary South Korea. And it’s an illustration of where South Korean conglomerates are heading as they attempt to harness the power of culture to further their business agenda.”

That may be. But at the same time, I’ve had many occasions to visit the Starfield Library since it opened, mostly to attend what Han describes as its “free events where both established and young writers are given an open stage to be heard and build a readership.” And at those events I notice a more robust attendance with a much wider demographic range than I do at similar literary functions in the United States. This would seem to belie the supposed, and often halfheartedly lamented, Korean lack of interest in reading. So would the specialized bookstores, book cafes, and other book-related niceties even now multiplying across Seoul — to say nothing of the book clubs I’ve visited there, which look nothing like the shambolic gatherings of eccentrics and retirees imagined in America. Maybe a cultural difference explains it. Or maybe it’s just easier to get to all these places on the  Seoul subway. 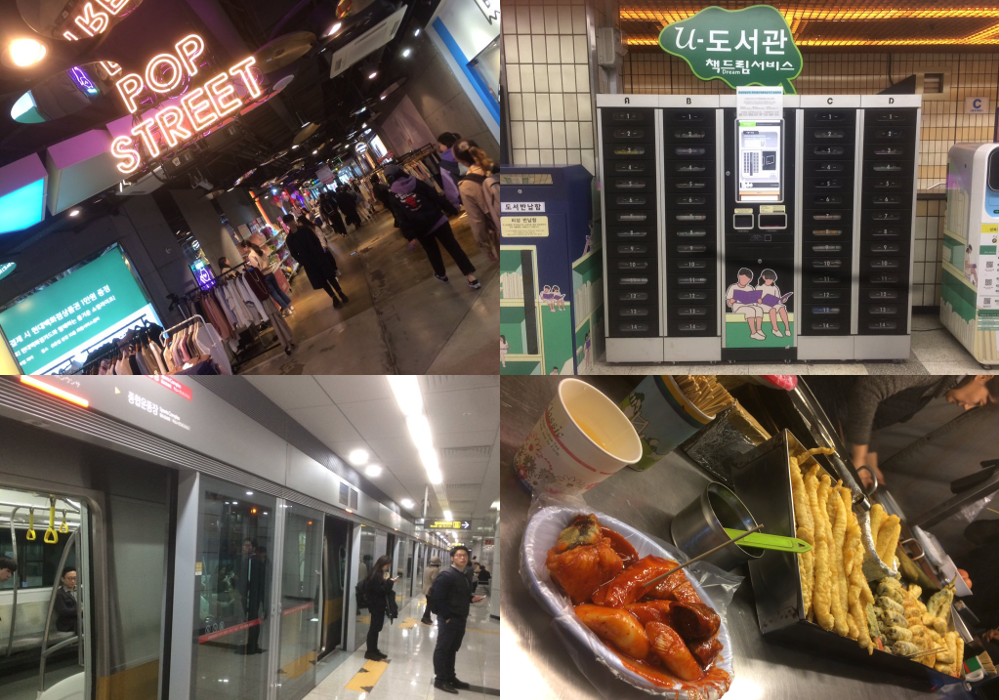