If at all possible, do try to see The Woman Who Ran (도망친 여자), the new picture by Korean auteur and international film-festival habitué Hong Sangsoo, at Seoul’s Emu Cinema. I recommend that particular venue in part because it offers occasional English-subtitled screenings for non-Korean-speakers, but more so because it appears as a major location in the movie itself. Watching Hong’s films in Seoul is like watching Éric Rohmer’s films in Paris: the characters tend to encounter one another and fall into meandering, insistent conversations in places you recognize from everyday life, and indeed may have passed through on your way to the theater. But it’s one thing to watch a movie in the city where it takes place, and quite another to watch its protagonist take a seat in the very same screening room in which you’re seated yourself.

That protagonist, a 30-something Seoul florist named Gam-hee, is played by Kim Min-hee, star of seven out of Hong’s last eight movies. It says something about Hong’s prolificacy that these constitute only the latest period in his career, during whose 24 years he’s directed exactly as many features. For his dedicated followers, myself included, the wait for The Woman Who Ran felt worryingly long, his previous work Hotel by the River (강변 호텔) having come out all the way back in 2018. In that film Kim’s character checks into the titular small-town lodgings, some distance from the capital, after breaking up with her married lover. That same year also saw the release of Grass (풀잎들), an hourlong novella of a picture built around the eavesdropping conducted by Kim’s amateur novelist from the corner table of a Seoul coffee shop.

The year before that, Hong directed three films. In The Day After (그 후) Kim plays an assistant at a small publishing house physically attacked on her first day of work by the boss’ wife, who confuses her with the girl she suspects he keeps on the side. This also turns out to be her last day of work, and Kim’s character in Claire’s Camera (클레어의 카메라), a film-distribution company employee, experiences similar professional difficulties. Her boss fires her on a trip to Cannes with seemingly inexplicable suddenness, and only later does it come clear that both of them have been surreptitiously involved with the same film director. This followed the also partially Europe-set On the Beach at Night Alone (밤의 해변에서 혼자), which features another of Kim’s performances as an actress and erstwhile filmmaker’s mistress.

Many sense an autobiographical dimension in these movies, on the part of both star and director. It was at the Seoul premiere of On the Beach at Night Alone in 2017 that Hong and Kim first acknowledged their affair, and for some time the revelation captivated an unexpectedly wide swath of the Korean public. In France, say, a married “art house” filmmaker taking up with a relatively young actresses would hardly merit comment, but in Korea the story became a scandal, not least because it followed the emotional lines of a popular television drama. The two appear to have been brought together by their first collaboration, 2015’s Right Now, Wrong Then (지금은 맞고 그때는 틀리다), and their work since has frequently revisited the romantic troubles of men and women in (or more often at the periphery of) Korea’s culture industry.

Hong’s films have often come up in conversation — or I’ve often worked them into conversation — since I moved to Korea nearly five years ago. Back then everyone knew of them, but few had seen more than one or two, if even that many. Not long ago almost every mention of Hong’s name drew some kind of comment about Kim Min-hee, approving or disapproving. But today, with his public (and ultimately fruitless) legal struggle for a proper divorce seemingly over, that charge has mostly ebbed away. Unlike the characters Kim played in Hong’s previous films, Gam-hee has no associations personal or professional with film, art, or literature, and she isn’t in flight from a morally suspect relationship. Five years into an apparently cloudless marriage to a professor, she spends the length of The Woman Who Ran visiting old friends while her husband is away on a work trip.

Young-soon, the first friend, lives out in an exurb quiet enough to keep chickens, having quit Seoul after her divorce. Su-young, the second, resides in an artists’ building in an upper-crust neighborhood, having secured her apartment with some experience in dance production despite teaching Pilates by day. Woo-jin, the third, isn’t so much a friend as a onetime rival, married as she is to a popular novelist Gam-hee once dated. Both structuralist and social observer in the manner of Rohmer, to whom he’s often compared, Hong arranges Gam-hee’s three meetings into a triptych, filling each panel with his signature parallels, repetitions, and variations. He also makes visual reference to previous films: one seemingly lucky zoom in on a passing cat ends a scene in Hotel by the River, and another caps off The Woman Who Ran‘s funniest passage by far. 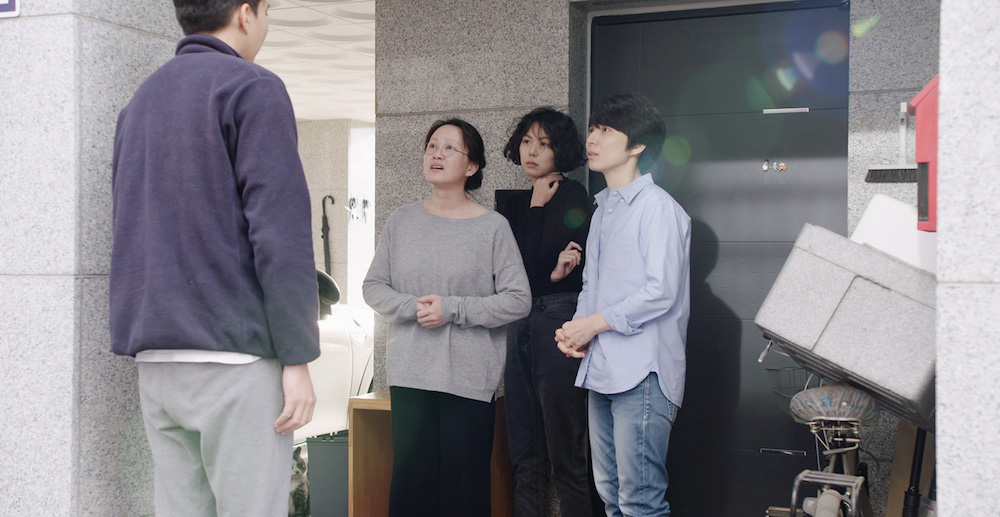 While Gam-hee is visiting with Young-soon and her roommate Young-ji, someone rings the buzzer. It turns out to be a new neighbor in the complex, come to request in a painfully roundabout manner that Young-soon and Young-jee stop feeding the stray cats that hand around the parking lot. The interaction hits an impasse almost immediately: to each of his insistences that the cats scare his wife, Young-ji replies that, yes, neighbors are important, but cats are important too. This continues for several minutes, and as in all of Hong’s recent pictures, the scene plays as one unbroken shot — hence the impact of the zoom with which it ends, as well as the equally characteristic pans used throughout the film as a kind of visual punctuation. By the end only the cat remains, the human characters having been prompted to return to their homes by sheer evident futility.

All of Gam-hee’s visits are interrupted by men, which some critics have taken as evidence of Hong’s sweeping critique of male importunity and insensitivity. In the film’s middle section, a poet shows up uninvited at Su-young’s door full of desperate yearnings, only to be firmly and unambiguously dismissed. But it transpires that Su-young had a one-night stand with the man, who happens to live in the same building, after meeting him at a local bar — the same place she spotted the other male neighbor she’s currently trying to reel in. Since his first film, Hong has indeed tirelessly deflated the romantic and artistic posturing of his male characters, but fewer of his appreciators have pointed out the equally harsh critique embodied in his female characters. They’re free of the male delusion and self-regard, granted, but their actions also lack so much as the pretense of moral or philosophical grounding.

The collision of the sexes in Hong’s work has become more awkward and disembodied over time, and sex itself has dwindled to a conspicuous absence. His movies once contained, practically as a matter of course, scenes in briefly rented hotel rooms as frank as they were unappealing — imagine a de-aestheticized, de-eroticized The Road to the Race Track — but now I can’t remember when last I saw one. Hong seems to have transcended the depiction or even suggestion of such assignations, and for this period Kim is the right muse. A former teen-magazine cover girl, her transition from modeling to acting was at first unpromising, and few productions in either film or television have used to full advantage her vaguely malign features and incongruously sexless aura. Ironically, her best-known role of the past decade was in Park Chan-wook’s The Handmaiden, now remembered primarily for its explicit homosexual loves scenes.

Since The Handmaiden Kim has worked only with Hong, and the manner in which he and Park present her couldn’t have less in common. Since Right Now, Wrong Then, her characters have dressed with increasing indifference, as models do off the clock; in The Woman Who Ran Gam-hee wears a bob haircut she claims impulsively to have given herself in the bathroom (and later had cleaned up at a salon). Her other self-expressions seem no more firmly rooted: each time we see her in a friend’s home she exclaims that she’d like to live someplace similar, and as she tucks into a meal of grilled meat with Young-soon and Young-ji she muses on her long-standing desire to be a vegetarian. Most of her interlocutors treat all this with indulgence, much as they did the drunken outbursts to which some of her characters were prone in Hong’s earlier films.

Whether shooting at home or abroad, Hong has always cast Kim as a kind of outsider, able to perceive and comment (sometimes brazenly) on the affairs of others characters, if not fully participate in them. (The Woman Who Ran twice objectifies this condition through the apparatus of Korea’s omnipresent domestic surveillance, having her regard silent interactions through security-camera screens.) Playing those others are, for the most part, members of Hong’s constantly but subtly changing troupe, which for almost as long as Kim has been part of it has also included Kwon Hae-hyo, a Korean A-lister whose usual characters tend to be diminutive but stern authority figures. (He recently appeared the aged leader of a rag-clad, weapons-laden family of zombie-apocalypse survivors in Yeon Sang-ho’s Peninsula.) In Hong’s latest he’s the media-darling novelist that Gam-hee once loved but Woo-jin married, the third man to arrive unexpectedly into a scene.

This unwelcome encounter occurs outside the café below Emu Cinema, where Gam-hee takes in a movie. Though the shots at first reveal no single identifying element, every Seoul cinephile will immediately feel the familiarity of the location, just as every Gangneung cinephile could that of the Shin-Yeong Cinematheque when it appeared in On the Beach at Night Alone. That film made an admirable showing at the 2017 Berlin International Film Festival, whose importance Hong’s fans recognize just as readily as they do the independent movie theaters of Korea. For them — or rather, for us — The Woman Who Ran winning Hong Berlin’s Silver Bear for Best Director this year counted as just as much of a victory as Bong Joon-ho dominating Cannes and the Oscars with Parasite. But make no mistake: having taken the Silver Bear for Best Actress three years before, Kim Min-hee beat him to the honor.

An Existentialist Seoul Bookstore Owner’s Message to His Countrymen: Goof Off for Once 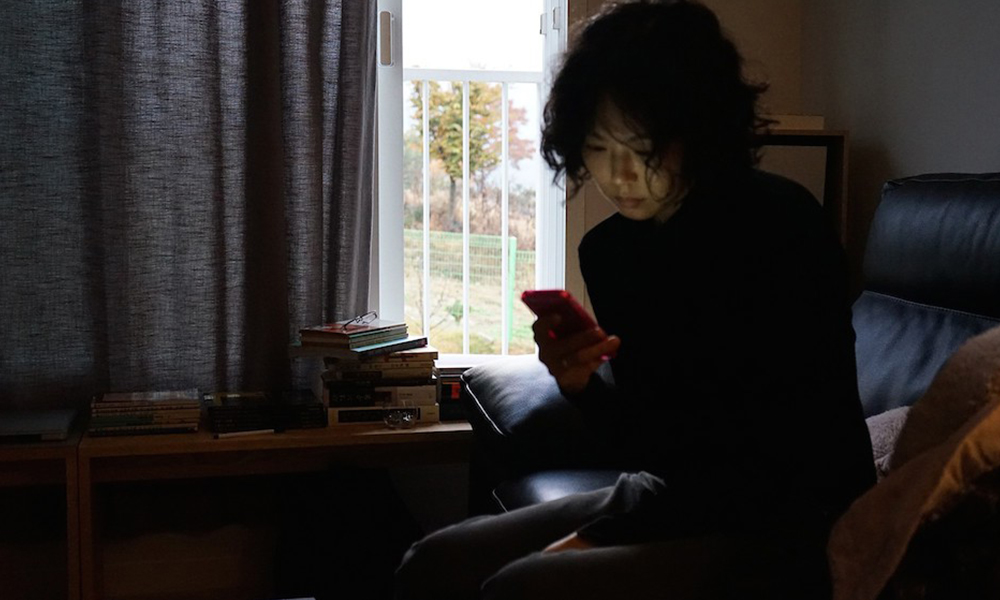