The first morning of my first visit to Seoul, I went out looking for coffee and came back with a stereotype seemingly confirmed beyond all expectations. After I found the nearest main road and started walking down it, I soon came upon a coffee shop (as I knew even then, Korea has quite a density of them), but couldn’t bear to enter it. The second one I found had the same problem, and I walked on further still, past a third and a fourth that I avoided on similar grounds. They were all open for business, none with too big a crowd, and I certainly had enough Korean to order a coffee. So what spooked me so badly? It was their location: that is, they were all located inside plastic surgery clinics, institutions I had already learned to fear and loathe from the disapproving attitudes of countless trend pieces on Korea.

It hasn’t taken long for them to lean hard on a narrow set of tropes: the tense relationship with the North, the ultra-competitive academic culture, the robust pop music and television drama industries, and, yes, the creepy popularity of cosmetic surgery. No matter the medium, these reports usually make their way to quotes from a few Kim Jihyes on the street who blithely state their intentions to get new eyelids, a new chin, a new nose, or some combination of the three (maybe even bought as a gift by her parents, should she do well enough on her college entrance exam) in order to one day land the right job, the right man, or both. This sort of thing causes a good deal of us in the West, and especially America, to stroke our imperfect chins and lament what we see as some sort of conformist, surface-obsessed dystopia of the image.

The subject comes so laden with baggage and cliché that, on one level, I haven’t really wanted to write about it; but on another level, some of the questions I consider most interesting never really get asked. At the top of the list: what about Korean plastic surgery, exactly, bothers Westerners so much? Different Westerners have different theories. Some think it has to do with a perceived hypocrisy, in that the longer a non-Korean lives here, the more of the glories of the Korean race that non-Korean will have heard implicitly or explicitly trumpeted. So why, they sarcastically wonder, does this world-beatingly superior people so badly need the assistance of cosmetic surgeons?

Others find it bothersome to see such flagrant engagement in an activity so many in the West see as cheating; at least when Americans go in for plastic surgery, they have the decency to lie about it afterwards. Others regard the face as such an integral component of one’s identity that to casually change it seems as inhuman a choice as to casually change one’s name. (Then again, Koreans also do a surprising amount of name-changing, often casting off their “old-fashioned” given name in favor of whatever name happens to be most popular at the time; imagine the equivalent in America, where a few thousand grown Johns, Roberts, and Davids each year apply to change their name to, say, Jaden.)

Others still put forth a more controversial opinion: that Koreans use plastic surgery to make themselves look more Western, but refuse to admit it. To what extent we can consider Westernization an aesthetic goal of Korean plastic surgery has, so I’ve discovered, become something of a third rail in conversations about all this. I’ve scrolled past many a knock-down, drag-out online argument about whether Koreans have been spending all this money on lighter skin, wider-open eyes, and tapered jawlines in order to meet Western standards of beauty, or whether they do it to meet “classical Chinese” standards of beauty — a trivial distinction, to my mind, if the outcome is the same either way, but clearly not to the combatants in these elaborate debates. 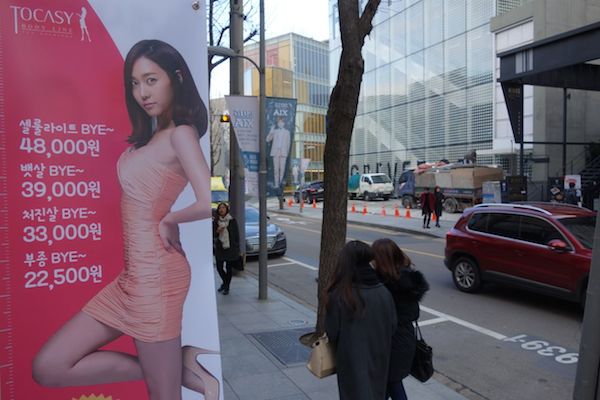 Surely we can all agree on one thing: that Korea and the United States have very different standards of appearance indeed. I first noticed signs of the chasm between the societies when I began to understand enough Korean to get a sense of what Koreans talk about when they talk about how people look: for instance, I’ve heard evaluations of the quality of skin in great detail, skin always having been something that, to my mind, you either had or you didn’t. I’ve heard much about the concept of face size — the smaller the better, according to their schema — which I’ve stopped even pretending to understand.

But the importance placed on appearance applies as much to clothing as it does to bodily characteristics. Many a Korean-American who pays a visit to the ancestral homeland returns filled with bitterness about the ceaseless nagging drawn by their style of dress, or lack thereof. I met one such lady who still seethes about how, when first she went to Korea back in the 1990s, her relatives all gave the stink eye, and worse, to her baggy jeans and Doc Martens — though she never once paused to consider whether her baggy jeans and Doc Martens may have been ugly.

When it comes to dress, I would submit that the Korean dystopia of the image doesn’t have it all wrong. Often when I think about what drove me from America, I think of the fact that, granted the freedom to dress just about any which way we like, we schlub around in hoodies and cargo shorts, a choice we make out of pure laziness but, if pressed, couch in incoherent terms of egalitarianism (or worse, self-expression, a concept which, to my delight, hasn’t yet caught on here as an absolute good), as if our slovenliness somehow put us all on an equal plane. In fact, even under those sartorially miserable conditions, the strata remain visible: witness how, in a city like Los Angeles, poor people dress in cheap sweatpants and flip-flops, whereas rich people dress in expensive sweatpants and flip-flops.

At least in Korea you see people putting in the hours, so to speak, by which I don’t mean that everyone here has somehow become a style virtuoso; far from it, especially among the older generations, whose women raise socks with sandals to the status of native garb, and whose men sport some of the most hilariously incongruous toupées I’ve seen everywhere. Words fail me to explain the preference for socked sandals, but in the case of the hairpiece-wearers, I don’t think they’re trying to fool anyone as much as they’re trying to feel as if they’ve made the effort, and be seen to have made the effort, in the manner of Americans who conspicuously work out five days a week at the gym.

Physical fitness counts as one of the qualities of self into which Americans feel little shame about plowing time and money. Another, one much more uncomfortably similar to the plastic surgery so tut-tutted about in Korea, is orthodontia. When I was growing up and even before, many if not most American kids could expect to have to go through what amounts to a years-long cosmetic surgery procedure, albeit undergone in something like a dentist’s chair. Orthodontists can justify this eloquently and fearsomely with talk of how little Jaden’s crooked teeth will surely, if left unchecked, grow into his brain by his junior year, but the fact remains that American parents will gladly shell out for it because they don’t want their kid looking like a poor. 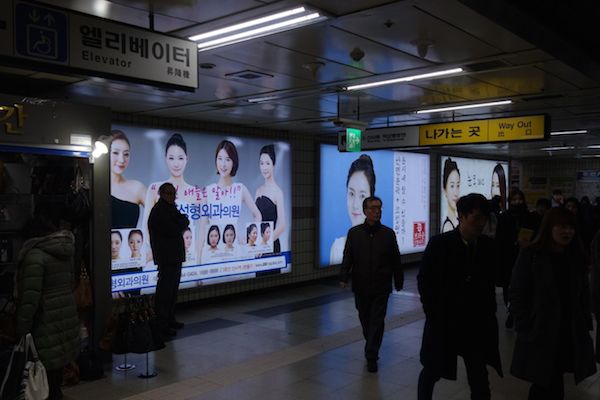 On a higher level, we might draw a comparison between cosmetic surgery in Korea and psychotherapy in America, in that both have at least the ostensible motive of self-improvement, and both give you something to talk about and signal your relative wealth, especially to friends of roughly equal wealth. And then they have the Sisyphean element in common: you’re never really done with either one. Just as you meet Americans who profess, not without a hint of pride, to having spend decades on the couch, you see Koreans on the street (especially in Apgujeong, the neighborhood where I searched in vain for coffee that first morning) wearing telltale bandages whose non-bandaged parts also attest to previous rounds under the knife.

We tend to think of serial plastic surgery recipients in America as falling into several looked-down-upon categories: the delusional would-be celebrity, the washed-up real celebrity, the aging society wife. Here, cosmetic procedures get advertised to everyday (if reasonably well-off everyday) people as addressing a more practical suite of concerns. The simple fact that job applicants must always attach their photograph to their resume, effectively granting preferential hiring to the most attractive from the get-go (as opposed to in an enlightened society like America, where companies have to consider everyone before they can proceed to hire the most attractive anyway), along with what some Korea observers see as a lasting influence of superstitious face-reading, constitutes reason enough to consider it.

Those eminently utilitarian considerations, of course, doesn’t make me or other Americans any less weirded out by it. The overall effect, given the prevalence of the same set of procedures all meant to produce a basically similar same set of supposedly ideal features, can look like a chilling conformity. (I still can’t get over how, when Koreans rank the beauty of the celebrities, they agree.) Still, I resist the notion of Koreans as a nation of mindless trend-following drones. The force behind all this looks to me less like conformity than resignation, a sense of, “Screw it, if changing my eyelids will get me a raise, I’ll change my eyelids” — or, for that matter, “Screw it, if working at Samsung will get me a more comfortable life, I’ll work at Samsung,” or “Screw it, if moving to Gangnam will get my kids into a slightly better school, I’ll move to Gangnam.”

But I, personally, have no more honest or cogent objection to cosmetic surgery as practiced and consumed in Korea than that I don’t particularly like the look it produces. Take this as the one man’s opinion that it is, but you need only watch older Korean movies, from the 1960s, 70s, or even 80s, to realize that people looked better, or at least more distinctive, before. Whatever people have gained with the advances in plastic surgery — and you could put a positive spin on it by calling it it the democratization of beauty, assuming you find its results beautiful — they’ve also lost something.

This pressure about looks has begun to weigh on Korean men almost as much it has on Korean women. (The hot trend piece of late: In Korea, Men Buy Cosmetics Too!) But to the extent that the men have entered the plastic surgery market later than the women, they’ve taken on that much less of a freakishly bland similarity of appearance. Korean friends, after a couple of drinks, often ask me what I think of Korean women. I always say the same thing: the regular, real-life ones present themselves with a skill few others in the world can equal, but the celebrities — well, frankly, I can’t tell them apart. Then they agree with me and we all have a good laugh, but part of me worries that Korean plastic surgery won’t have accomplished its mission until I can’t tell anybody apart at all. 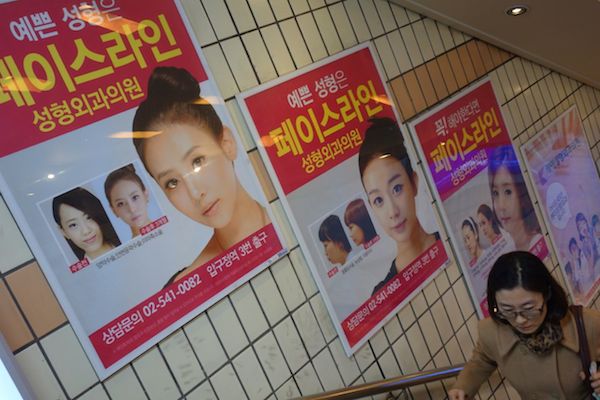