Every journalist covering South Korea must, at one point or another, write about suicide. Not only do a greater percentage of people kill themselves here each year than anywhere else (though Lithuania comes close), the very act of killing oneself can plausibly be tied to other widely lamented conditions in Korean society. A CEO’s suicide might result from the pressures of a “hypercompetitive” economy (as might that of a long-unemployed father), a student’s suicide might result from a low score on the all-important college entrance exam, a young woman’s suicide might result from being attacked by her social-media followers (or even from the failure of a cosmetic surgery procedure to deliver the expected results). But trends more recently identified by global media may produce a subject as reliable as the suicides that happen in South Korea: the suicide of South Korea itself.

The quantitative view of this national suicide involves a figure of which reporters have already made much: Korea’s startlingly low birthrate. “In 1960, South Korea had a total fertility rate of more than six children per woman, high enough to cause a population explosion,” writes Bloomberg’s Noah Smith. “A country needs a fertility rate of about 2.1 — a little more than one child per parent — to maintain long-term population stability. South Korea’s fertility is now about half that number. And it’s still falling.” The country’s record-low birthrate of 0.98 puts it below even the famously fertility-challenged Japan, which still manages more than 1.4. As soon as Korea’s figure was reported last year, doomsayers began projecting the trend toward predictions of what year, exactly, the very last South Koreans would die off.

Good riddance, more than a few Koreans in their twenties and thirties might have thought, as long as they take this society with them. The refusal to reproduce as a kind of protest against the expectations of modern Korea has proven an appealing media angle, and this summer has seen a good deal of coverage of the so-called “no marriage” movement among these younger Koreans. The impact of its name in Korean turns on a difficult-to-translate linguistic distinction: while calling someone “unmarried” in English has no strong connotations, the word’s standard Korean equivalent, mihon (미혼), implies that its object may not have married yet but one day will. An alternative term has thus gained traction in recent years: bihon (비혼), which suggests a deliberate choice not to marry, and thus not to engage in anything that comes along with marriage.

A chapter on mihon versus bihon appears in thirtysomething existentialist bookstore owner — and, of course, proud bihon-subscriber — Kim Jong-hyeon’s book I’ll Goof Off for Once (한번 까불어 보겠습니다), but the bihon label has become more popular thanks to vloggers like Jung Se-young and Baeck Ha-na, whose Youtube channel SOLOdarity (or in Korean 혼삶비결, “the secret to life alone”) extols the virtues of the associated lifestyle. But in an English-subtitled episode entitled “Marriage, Brainwash of patriarchy?” they explain that even bihon has an unacceptable side, since it implies something abnormal in the choice not to marry. They respond by labeling married people gyeolhonjueuija (결혼주의자), or “marriage-ist,” to those looking to take bihon to the next level the offer the designation of banhonjueuija (반혼주의자), or “anti-marriage-ist.”

Less-than-enthusiastic attitudes toward marriage are to be found even among the non-bihon. Last year I was invited to participate in a segment of a television documentary about marriage shot in Kim’s bookstore along with a few other regulars. The crew set up their lights, cameras, and microphones and seated us all around a table covered in bottles of beer, telling us to drink and have a talk about the concept of marriage itself. Later they brought in the protagonists of the documentary, a couple in their mid-twenties who couldn’t decide whether to get married or not after about a year together. After a few drinks I realized that we indie-bookstore habitués — a group of ten or so that included only two married people, and even no less a freak than an unmarried Westerner in his mid-thirties — were meant to make, from our place on the fringes of society, a kind of argument for the opposition. But the man of the central couple described himself as only 60 percent up for it in the first place, and the woman 40 percent, which to me seemed to answer the question of whether they should get hitched, and in the negative.

Like Kim, some of the Koreans who fly the bihon flag are men. But the most visible and controversial are, like Jung and Baeck, women. And Jung and Baeck in particular have cultivated an androgynous self-presentation that emphasizes their non-conformity in a society that sets great store by visible femininity. These and other aesthetic choices made by some young Koreans, such as the tattoos that seem to increase in prevalence each summer they become visible again on the streets of Seoul, suggest a “you can’t fire me, I quit” attitude toward traditional forms of social and economic life. To Western eyes, this kind of rebellion projects the nervous conviction of adolescence, a reflexive opposition to any and all received beliefs and expectations. So do conversations like the ones between Jung and Baeck, laden as they are with references to government brainwashing, the manipulations of the media, the sprawling machinery of the patriarchy that grinds women in its gears, and the slavery of production and consumption inherent in capitalism.

Unlike such conversations in the West, there can be no question of consciousness-expanding substances playing a part — South Korea’s harsh drug laws see to that. But apart from those drug laws, this society has lost a great deal of the rigor that characterized it back when it was busy achieving the economic “Miracle on the Han River.” The developmental fast track that brought the country into the first world in the 20th century was also a fast track to the kind of malaise that lies on the other side of large-scale collective projects. A teenager who senses weakness in his parents rejects their claim to authority, surrendering instead to the rule of whichever of their own impulses they feel most urgently, and something similar appears to be happening on a societal scale in Korea. It has taken various forms so far, some of them innocuous — the earnest attempts to divine the secret of satisfaction in life from places like Denmark and Australia come to mind — but others with potentially dire consequences, such a what Smith calls “complete demographic collapse.”

One reason commonly offered for the threat of Korea’s extinction is that having children here has simply become too much of a burden, due not just to the costs of education but the difficulty of paying them when a mother can’t build the same career as a man. The surprise popularity of Cho Nam-joo’s Kim Ji-young Born 1982 (82년생 김지영), a novel-like cri de coeur about the impossibility of fulfilling the personal and professional obligations foisted upon Korean women, brought these complaints into the zeitgeist not long ago. The city of Seoul responded by promoting the services it offers to assist a variety of demographic groups at different stages of life, but Jung, Baeck, and others in the bihon camp find such governmental efforts wanting — and in the case of the more recent national pushes to get the birthrate up, actively offensive in their orientation toward marriage and children.

Jung and Baeck make a sound point when they talk about not having grown up around many models of marriage worth aspiring to: one often encounters marriages in Korea that seem long ago to have dissolved in all but the legal sense. But if the married women Jung and Baeck saw around them struck them as unhappy, it has to be said that the search for alternative sources of fulfillment doesn’t look especially fruitful either, leading as it often does to lifestyles sterile in more than one sense of the word: for how many Koreans has the rejection of traditional paths meant nothing more than traveling to the same foreign countries, Instagramming themselves in front of the same pieces of scenery? But then, rebellion as conformity by other means has long been an acknowledged phase of growing up in societies all around the world, many of which have also come up against the difficulties that arise when  the demands under which humanity evolved suddenly become mere options. And the nation-state of South Korea, founded only 70 years ago, is in a way still an adolescent itself — an age group, it hardly needs saying, at a particularly high risk of suicide. 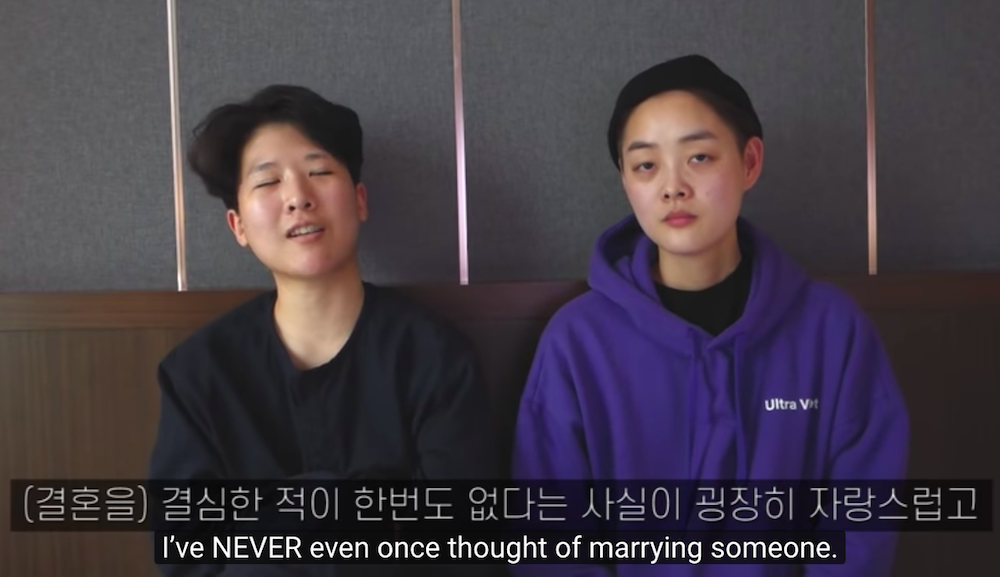