“Are you ever uncomfortable as a foreigner in Korea?” I’ve heard that question, and countless variations on that question, from Koreans and other foreigners alike. The answer is no, in that I don’t feel afflicted by any excessive hassle (at least of the non-administrative variety) as a result of my outsider status. The most frustrating complications of life in Korea come not from my being American, but my being a user of Apple devices. The iPhone, available here for more than a decade now, more or less works, but nothing else is designed for the user of Macintosh computers. That holds especially true for online banking and commerce, whose use of Microsoft’s obsolete Windows-only ActiveX software framework has been mandated by this ostensibly tech-savvy country’s law since the 1990s.

Sticking to Apple in Korea is like trying to stay vegetarian in Korea: sooner or later, your principles will be compromised. Some expatriates break down and buy a cheap Samsung laptop for use when Korean online services absolutely refuse to cooperate. At least they can rest assured that tech support, “after service” (Konglish for repairs), and compatible accessories are never far away in the “Republic of Samsung.” American journalist Geoffrey Cain refers to South Korea that way throughout his new book Samsung Rising: The Inside Story of the South Korean Giant That Set Out to Beat Apple and Conquer Tech. The name reflects not just the fact that Samsung is from Korea — which the company once took no great pains to point out to consumers who assumed it was Japanese — but that, more than any other entity, Samsung has made the country what it is.

On the first page Cain writes of having interviewed more than 400 individuals for the book, including “current and former Samsung employees, executives, politicians, businesspeople, board members, journalists, activists, and analysts.” Asked which they think is more powerful, Samsung or the government of South Korea, I wager that each and every one of them would name the former without hesitation. In one form or another, Samsung has outlasted quite a few ruling regimes. Its founder Lee Byung-chul first applied the brand name to a vegetable and dried fish shop he started in 1938, when the country was still a Japanese colony. Lee continued to expand his ventures when Americans displaced Japanese after World War II, since either power could be worked with; the North Koreans who invaded in 1950 proved to be tougher customers, preferring to loot rather than cooperate.

Lee rebuilt the Samsung empire after the Korean War, expanding into sugar, wool, finance, and any other product or service that presented an opportunity. But when Park Chung-hee, who would rule South Korea for the next eighteen years, took power in a 1961 military coup, he put Lee on trial. “The dictator had a grand bargain in mind,” Cain writes. “Samsung, he believed, was chaired by a white-collar criminal. Prison time, however, would be pointless, stripping Samsung of its use to the nation.” Instead, Lee could “give up large portions of his three banks to the state,” pay heavy taxes and penalties, and get Samsung cooperating with Park’s “plans to build a new, wealthy, powerful nation.” Cooperate he did, and Samsung eventually grew into the largest of the chaebol, or “wealth clans,” the enormous conglomerates that built and continue to dominate the South Korean economy.

Most chaebol (others still extant include Hyundai, LG, and Lotte) also have rags-to-riches tales to tell, with emphasis on the founder’s gumption and the setbacks overcome along the way. But none offers the drama the Samsung story has, and indeed continues to: Cain opens his first chapter with the smoky meltdown of a Galaxy Note 7, the once-acclaimed smartphone whose tendency toward spontaneous combustion brought the company so much bad press in 2016. Not only did Samsung struggle to properly execute a recall and diagnose the problem, as Cain tells it, it could barely manage to acknowledge the existence of a problem in the first place, even as defective units continued to scorch airplane floors and reduce cars to charred husks. Part of the problem was the corporate culture resulting from an “almost military-style management system that conducted business as if it were issuing battle orders.”

As a chaebol, Samsung comprises a number and diversity of businesses interconnected in ways incomprehensible without inside knowledge. Samsung Rising is concerned with by far the most profitable, Samsung Electronics. Created in the 1960s to produce television sets, its current success owes to Lee’s decision in the mid-70s to move into semiconductors, a promising fertilizer operation having just been undone by an embezzlement scandal. Such a long shot, in the Samsung way of thinking, called for extreme measures: an engineer then employed there tells Cain of a forty-mile company hike, overnight in wintertime, during which “a unit commander ambushed them several times, forcing them to solve games and puzzles on the spot,” all of it meant to “test the team’s mental toughness as they prepared to race forward making a 64K DRAM chipset, an early semiconductor used in calculators.”

Cain also writes of a much more recent event called the Samsung Summer Festival, held for new recruits who had “been through boot camps, hiked, and suffered sleep deprivation while learning to work together and treat each other as family.” Carefully positioned in a stadium and “choreographed to look like a human LED screen, they raised their colored placards in unison, creating a sea of red. A small group flipped their cards to yellow, creating the image of a digital watch display.” Other images so formed include the latest Samsung mobile phone and the sales target for that phone. Even for those of us who haven’t traveled above the 38th parallel as often as Cain has, the analogy makes itself. “Samsung hates it when journalists draw comparisons between Samsung company practices and North Korea,” Cain writes, “even though such comparisons are fairly common among Samsung employees themselves. Steve Jobs had his own cult at Apple, Samsung employees tell me.”

Lee Byung-chul is the star of the Samsung story until his death in 1987. After taking a few years to come into his own, Lee Byung-chul’s third son and successor Lee kun-hee delivers and redelivers the browbeating declarations that turn the company’s focus from quantity to quality. In the late 2000s he and Samsung come under scrutiny for evading taxes and purchasing political influence (among even more unsavory accusations); his son Lee Jae-yong (known as “Jay Y. Lee”), Samsung’s de facto leader since Lee Kun-hee vanished into a hospital suite after a 2014 heart attack, has served jail time for bribery and embezzlement and now awaits another trial. (“More than half of the family leaders of the ten biggest chaebol groups are convicted criminals,” Cain notes.) The Samsung stories run by Korean newspapers — at least the ones not owned by Samsung — have something of the intrigue of the royal family and court sagas of old.

“South Koreans cannot seem to get enough of the family behind Samsung,” Cain quotes the New York Times as saying, “whose mystery-shrouded inner workings many liken to those of another famous Korean clan: the Kim family that rules North Korea.” Yet somehow the rest of the world can’t work up anywhere near as much interest in Samsung as it has in North Korea. Samsung’s multifaceted and convoluted nature as a business entity has something to do with this, as does its lack of a strong identity separate from that of the country in which it was founded. Assets when the company sought to avoid attracting too much attention, these qualities have become liabilities in its smartphone war against Apple. Despite world-beating sales and profit figures, Samsung remains saddled with reputation of a non-innovative “fast follower” that appears to bring every concept to market in order to see which one sells.

Whatever Apple’s faults, it’s impossible to imagine any of its products drawing as harsh a reception in the press as, to name one example, the foldable smartphone Samsung released prematurely last year. “We Are Not Your Beta Testers,” said the Wall Street Journal‘s damning headline. But as a supplier of essential electronic components to Apple, Samsung benefits even when the iPhone wins: Cain cites a figure of $110 earned by Samsung for every Apple iPhone X sold. And at any given time, the success of one of Samsung Electronic’s divisions compensates for the troubles of the others: “When the semiconductor business falls, Samsung can profit from smartphones. When the smartphone business declines, Samsung can make a profit from displays.” Hence what some outside observers have seen as the company’s inexplicable resilience in the face of exploding phones or the imprisonment of its top executive.

And yet so much hinges on the performance of Samsung Electronics itself, on which the Samsung Group depends for its health. On the Samsung Group, in turn, depend some of South Korea’s biggest banks, and thus a pillar of the country’s economy. Fortunately for that economy, Samsung has a powerful drive to succeed. Its success, at least initially, “wasn’t about sales, operations, economic policies, and bottom lines. It was a story of patriotism and spirit. Samsung tapped into the feelings, emotion, and sense of belonging that South Koreans experienced. It understood the human need to be a part of something great, something bigger than oneself; it offered Koreans the promise of glory.” This promise may be ebbing away: “Our Samsung spirit exists no more,” one of the company’s former vice presidents tells Cain. “We are becoming like Americans, too short-term and cold and logical.”

But Samsung has found another motivation, one that seems at least as compelling as patriotism, spirit, and glory: beating Apple. By certain measures it now does so, or at least holds its own against the iPhone-maker’s seemingly unchallengeable aura of technological and aesthetic sophistication. Yet for all the engineering and design talent Samsung now draws from around the world, something is faintly but perceptibly missing from even its most acclaimed products, smartphones or otherwise. The Apple that Steve Jobs rebuilt set a standard of care and coherence in personal electronics unmatched by other manufacturers, and not by obsessively defining itself against a specific competitor. An interviewee tells Cain of seeing a portrait of Jobs on the desk of  the CEO of Samsung Telecommunications America, put there as a reminder of his mission. No matter how well Samsung does in the future, will a picture of any Lee man ever grace the office of an Apple executive?

It was Jobs, ironically, who saw Samsung’s potential in electronics when few Westerners did. He visited Samsung headquarters in 1983, as Cain tells it, “on a bold and prescient mission: to build a tablet computer, a full twenty-seven years before the introduction of the iPad.” In search of a supplier of memory and displays for the project, he had made his first stop in Japan to pay a visit to Sony, then the world’s most cutting-edge electronics company, “but he felt Japan’s neighbor, South Korea, which most of the industry saw as sloppy and backward, was starting to show promise.” In the event, Jobs’ ouster from Apple two years later would put an end to his first attempt at a collaboration with Samsung. For the remainder of the 20th century, the fortunes of Samsung would remained tied up, as they’d always been, with the fortunes of South Korea. In the 21st, they would become just as entangled with those of Apple — and if that sounds implausible, look at whose logo made the cover of Samsung Rising. 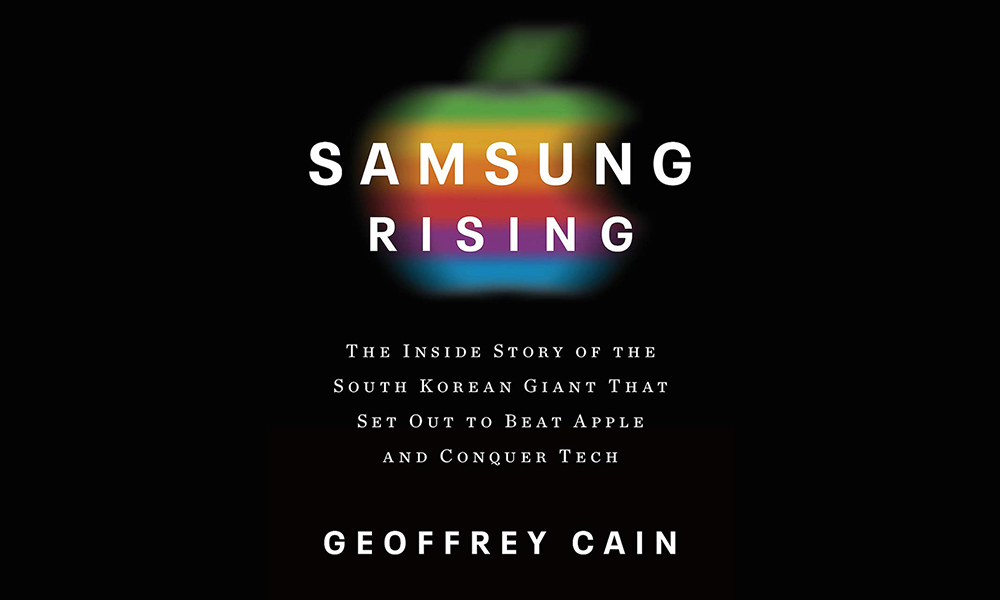