Come to live in South Korea, and you’ll find that everything you used to use in the old country has a locally made equivalent in Korea. That goes not just for goods but for services, even — maybe especially — services on the internet. For nearly 20 years, Koreans have done most of their searching not on Google but on a portal site called Naver, which also offers its own, much more functional (in Korea, that is) map application. They look up restaurants not on Yelp but Diningcode, find apartments not on Craigslist or Zillow but Zigbang or Dabang, and have long done their messaging through a service called Kakaotalk. Alongside the Korean Wikipedia exists the jokier but often more detailed Namuwiki.

Those named are hardly the only options, since each category with any potential user base at all tends to produce an abundance of Korean competitors, no single one of which ever seems to attain complete dominance. Apart from the government’s reluctance to allow the release of detailed map data to foreign companies (ostensibly in the name of national security), this situation hasn’t arisen, for the most part, as a matter of policy, but from the perceived need to address the supposedly unique expectations and problems of the Korean consumer, which itself might go all the way back to the exports-good-imports-bad developmental ideology of the 1960s and 70s. It has also given rise to a Korean equivalent of TED Talks, the series of short video lectures that for well over a decade have generated praise, criticism, and hundreds of millions of views.

Korea’s own TED Talks launched in 2011, calling itself “Sebashi” (세바시), a contraction of sesangeul bakkuneun shigan 15 bun (세상을 바꾸는 시간 15분), officially rendered in English as “The Fifteen Minutes that Changes the World.” Most of its videos run over 15 minutes, some well over; however much its creators have copied from the TED Talk format, they haven’t applied its famously rigid 18-minute limit. TED curator Chris Anderson has justified that length as “long enough to be serious and short enough to hold people’s attention,” with the added advantage of being “the length of a coffee break.” Many a Korean office worker combines coffee break and cigarette break, meaning they take them outside, even during a chilly Seoul winter like this one. 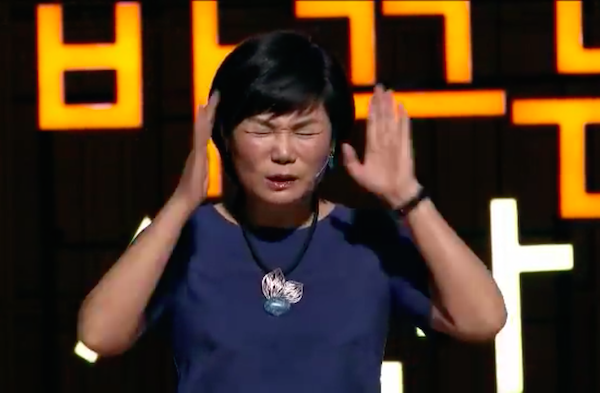 You’d think that holding each source of stimulant in one hand would make it difficult to take on a third, but some do manage to stare at their cellphones at the same time. Still, Koreans appear to do more of their video-watching in transit, thanks to both the well-developed transportation infrastructure in the cities and, in this Most Wired Country in the World, the nearly universal penetration of high-speed connectivity. “How do you use 15 minutes?” asks Sebashi’s official introduction. “There are times in the busy city when you miss a bus and have 15 minutes to spend. Sometimes, peckish in the late hours of the night, you have 15 minutes while the ramen boils. Other times you spend 15 minutes just lounging around, flipping through a magazine.” Wouldn’t you rather use those 15 minutes to change the word?

Or, more in keeping with Sebashi’s content, wouldn’t you rather use those 15 minutes to change yourself? The subjects of the most popular TED Talks include how to spot a liar, why we procrastinate, whether schools “kill creativity,” and — at 18,640,824 views and counting as of this writing, the most-seen TED Talk of all time — what happens when you reply to spam e-mail. The subjects of the most popular Sebashi talks include why fun women’s lives turn out well, how communication is like the heart of a woman, and the importance of asking people whether they’re okay so they don’t commit suicide — all of which happen to be delivered by the same man, a “communication professional” by the name of Kim Chang-ok, far and away the speaker identified with Sebashi more than any other.

In the earliest of his many talks (a group which now includes one on the emotionally stifling effects of giving too many talks), Kim appears in his capacity of an “adjunct professor of Christianity” at Seoul Women’s University, but his Sebashi-driven renown as a speaker has since put him in a new position: the head of an outfit called the Kim Chang-ok Human Company. Watch any of his talks, and even if you understand not a word of Korean (though some of them come with optional subtitles in English and other languages), you’ll get a sense of the impressive extent to which he’s mastered the art of public speaking. I, far from mastery of the Korean language in public or private, have learned a great deal from watching him, perhaps inferring the Korean-equivalent techniques explicitly taught by English “sound and communication expert” Julian Treasure in “How to Speak So that People Will Listen,” the second-most-viewed TED Talk of all time.

The first-most-viewed Sebashi talk of all time, Kim’s 2012 “I See You” (나는 당신을 봅니다), has racked up as of this writing, 5,184,436 views. That may not sound like much against “This Is What Happens When You Reply to Spam E-Mail”‘s 18 million and counting, but it amounts to about 10 percent of the entire population of South Korean. Ten percent of America watching a video would bring in more than 32 million views, and the equivalent for the global English-speaking population (let alone the many learners, especially in Korea, who use TED Talks for listening practice) would come to at least 80 million. What about this talk, which after five years hasn’t received an English translation, strikes such a chord with its Korean viewers?

Kim uses most of its nearly 18 minutes talking about his relationship with his father, a hard-of-hearing curmudgeon who wouldn’t speak a word without a drink, and with a drink would subject his family to his repetitive monologues for hours at a stretch. Kim also treats it as almost going without saying that his father beat his mother, which, if the entire corpus of modern Korean literature and film is any guide, makes him a pretty standard bitter Korean patriarch, effectual only in his rage. Such figures seem to have been especially common in the youth of the 44-year-old Kim’s generation and earlier, and in places like the remote Jeju Island where he grew up. Still, years after leaving home, Kim found it himself to give his abusive father money now and again (a choice that most non-Korean viewers may struggle to understand), and in the process found a way to reach an understanding with the old man. 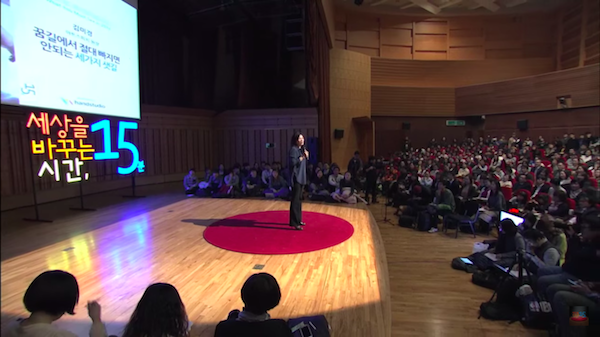 The decisive change came when Kim, laid up in the hospital and inexplicably desperate to hear his father’s voice, called the family home. But his father’s voice, in its exaggerated volume, delivered only the same three messages it did every time: telling him to eat food, telling him to watch for cars, and telling him that he was going to hang up to avoid a big phone bill. It then occurred to Kim that he could take it upon himself to interpret these few and unvarying words of his father’s differently — the injunction to eat food as an expression of love, the reference to the phone bill as a suggestion to come visit if he has the time — in much the same way as the alien race in Avatar, at least as big a hit here in Korea as everywhere else, all say “I see you” to each other by way of greeting but mean something much deeper.

At this point in Kim’s talk, the video has already cut to several moist-eyed audience members of the audience of various ages, suggesting that they, too, have experienced similar difficulties with uncommunicative or even violent family members. Describing what he experienced at the hands of his father, Kim reaches for an English loanword: teurauma (트라우마), a Koreanization of trauma. In closing, he tells his audience to give themselves hugs and ask themselves whether they have anyone in their life toward whom they should express their own apologetic feelings, thus setting them on the road to healing — or rather hilling (힐링), which has also caught on as a Korean buzzword, and which seems to apply to a variety of discomforts for which the Korean language, though it never lacked a lexicon of sorrow, could never quite name before.

Hilling falls squarely into Sebashi’s mandate, as do the elements of communication, “social treatment” (사회적 치유), and everyday life. This brings to mind the salve-like tweets of social media savvy Buddhist monk Haemin Sunim, and more specifically the words of Alain de Botton, another well-spoken writer with an enormous Korean audience: “Korea is a wonderful country, but in many areas it’s a country in pain.” Spend enough time here, and you’ll hear plenty of overheated talk about changing the world (often within time frames even less plausible than fifteen minutes) and about changing oneself as well, some of it American-style self-help re-branded as “self-development.” But the core concern — as reflected by these Sebashi talks and other popular ones on subjects like facing misfortune, practicing “fair trade” in marriage, and not adhering too closely to societal expectations — remains no more complicated, and no easier, than finding a way to live.

Will Korea’s Most Famous Buddhist Monk and His Tweets of Zen Wisdom Play in America? 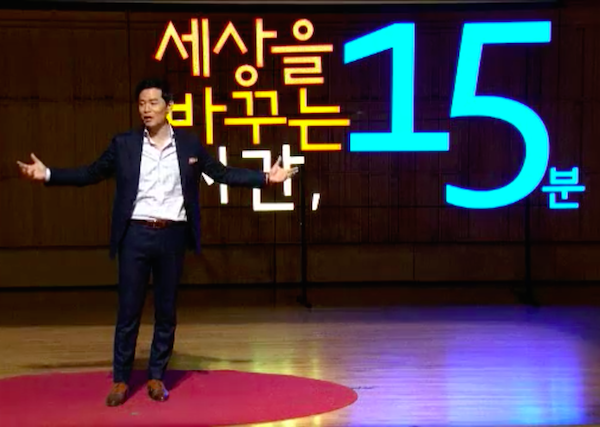