If you want a seat, you’ve got to get there early — really early. Even then, plenty of others will have long since set themselves up in the prime spots, close to the action with food, drink, and reading material close at hand. I myself usually only manage to find a single chair in the back of the room when I arrive, about two hours ahead of showtime as always. I’m glad to get it, though, since I’ll stay there for the next six hours. Is this a concert by a big-name band? Some sort of political rally? Will they be giving away money? No, not quite — it’s a book podcast.

Since 2012, each weekly episode of Lee Dong-jin’s Red Book Room (이동진의 빨간책방) has offered  from an hour and a half to over three hours of segments including an in-depth discussion of a particular book between the show’s regular panelists, conversations with the authors themselves, readings of prose as well as poetry, and an opening monologue by the host followed by a short chat about the books he’s recently bought. That host, the titular Lee Dong-jin, first made his name as a film critic and remains well known as one, though over the years, and with increasing fame, he’s assumed the role of a prolific and high-profile all-around cultural critic, the likes of which America hasn’t had for a while now.

Lee’s self-confessed workaholism (a term that has settled, transliterated, into the Korean language) makes for certain times when you can’t go long without seeing him on television, hearing him on the radio, or reading him in print. As a member the highly culturally influential Korean generation born in the 1960s — Korea’s Baby Boomers, in a sense — he came of age in the era of mass media and seems to have transitioned without a hitch to the era of niche media, in part by keeping one foot in the old while setting the other in the new, bringing his fans along with him. 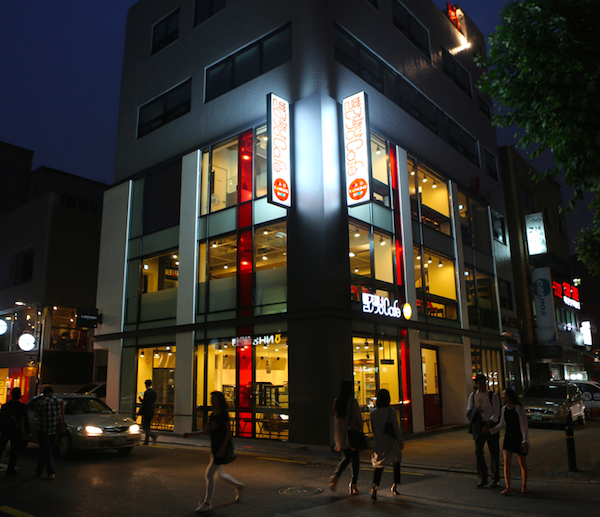 Or at least it seems like they all show up on the nights that Red Book Room does its live tapings, even thought the announcement on the show’s Facebook page happens only a few days beforehand. They show up not to Lee’s basement, nor to the kind of theater where you’d go to watch a taping of, say, A Prairie Home Companion. They come to the Red Book Café (빨간책다방), a hiply designed three-story coffee shop in Seoul’s also-currently-hip neighborhood of Hapjeong (I walk back home through some truly lively streets afterward when the show happens on Friday nights) filled with books available to browse or buy, the selection curated by Lee himself.

In America, this might seem like a pretty unconventional operation, but in Korea, each of its aspects has a precedent. The concept of the “book café,” whether that means a coffee shop lined with shelves of books for sale or just to read with your americano, has so proliferated that even Maxim, Korea’s biggest manufacturer of traditional pre-sweetened instant coffee (also known as 다방커피, or “café coffee”), has opened a book café of their own, the Maxim Mocha Library. And opening a branded coffee shop has, in Korea, looked like a potentially viable extension of the podcasting business model for years now. Even Talk to Me in Korean, the educational podcast that helped me learn Korean, has opened a café that hosts game nights, language exchanges and other such activities.

But the Red Book Café goes a step further by having built into its third floor a full-fledged, wood-paneled recording studio. Through its window (or through the monitor mounted beside it, though it never shows anything but a feed of the host’s visage) the audience — at their tables, in their chairs, and often many, by necessity, standing — eagerly watches the book talk between whichever guest author might show up that night (Kim Young-ha, about whose own book podcast I’ve written here, has made an appearance), regular interlocutors like novelist Kim Jung-hyuk and film journalist Lee Da-hye, and of course, Lee Dong-jin himself, always wearing his trademark red glasses, who enters through a door labeled — get it? — “DJDJ BOOTH.” 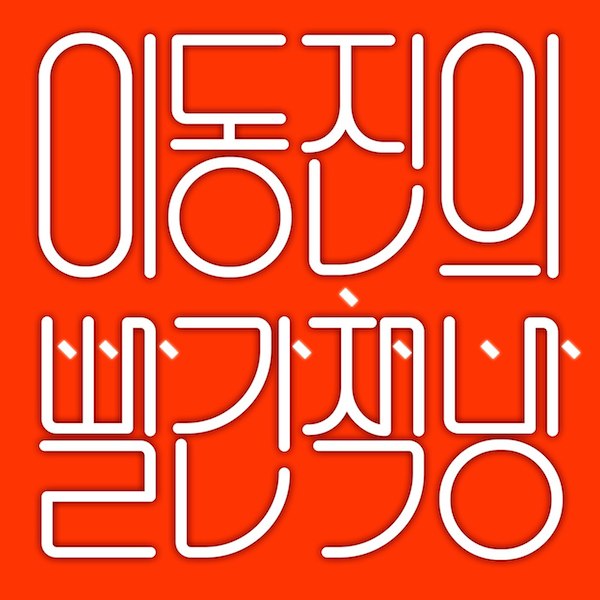 The exact opposite of the stereotypical basement podcast enterprise, both the Red Book Café and Red Book Room itself are productions of the publisher Wisdom House, though the former, with its diversely stocked shelves, hardly feels like a company store. The podcast, apart from a segment with the publisher’s editors, by no means focuses on Wisdom House books alone: Lee and company mix it up with not only books from a variety of publishers, but in a variety of genres both fictional and nonfictional, on a variety of subjects, and originally from a variety of countries.

Some of the Western books discussed on the show include big bestsellers like Yann Martel’s Life of Pi and Malcolm Gladwell’s The Tipping Point; Andy Weir’s The Martian, basis of the recent Ridley Scott movie; the print counterpart of the The Beatles Anthology; John Williams’ 1965 campus novel Stoner, which even in the West didn’t receive wide acclaim until the 2000s; and books even more popular in Korean than they were in English, like Bill Bryson’s Neither Here nor There, or much more so Hermann Hesse’s Demian, which nearly every Korean alive seems to have read.

Why spend your entire late afternoon and early evening in a book café when you could just listen to the episode on your iPod in a few days? Some of the appeal has to do with actually seeing who the podcast’s other fans are, though Red Book Room‘s nearly all-female crowd, ranging from their early twenties through middle age, aligns with what you hear about the demographics of book sales everywhere. But there’s interaction as well: at the end of each session, after Lee has recited the closing poem, one of his producers unlocks the mailbox (red, of course) mounted to the wall, pulls out the pile of notes listeners have written throughout the show, and delivers them to Lee to read aloud and respond to in an informal and often laughter-filled Q&A (some of whose jokes I get, and some I don’t). 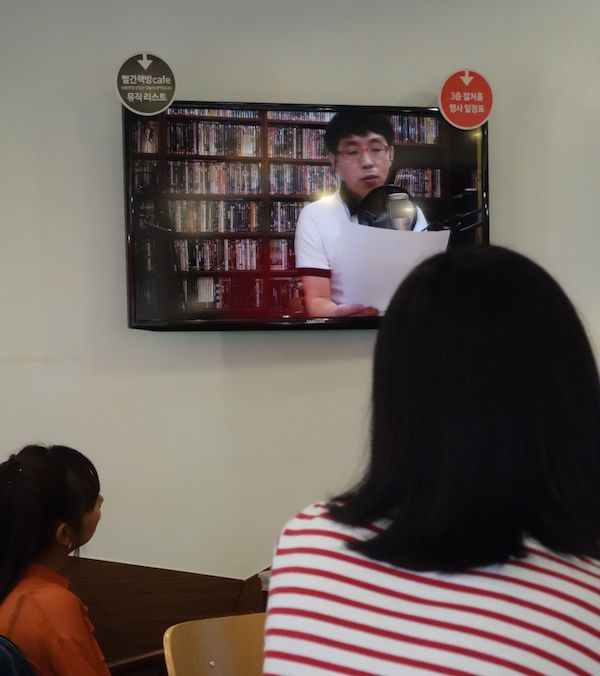 When that wraps up around 9 or 10 p.m, Lee emerges from the DJDJ booth with a stack of various books, all up for grabs to members of the audience, first dibs to those whose notes he’d read that night. One lucky attendee, their note chosen by Lee at random out of a shuffle, will get to take home any volume they like from the Red Book Café’s shelves. I’ve often browsed those shelves while awaiting my cappuccino, wondering which book I would pick, though in all the months I’ve been coming to Red Book Room‘s live tapings — and they’ve become a semi-regular event in my life to which I always look forward — I’ve never dropped a single message into the mailbox, let alone had one win me a book of my choice.

I’ll do it, I really will, but for now I don’t want to draw any more attention to myself than I do by my very presence, not just as one of the few men in the room, but always as the sole visible Westerner. One night, Lee read out a question a fan had e-mailed in, asking if the show had any foreign listeners, “like Chinese people or Japanese people.” Half the heads in the audience turned toward me, but I just shrugged. Before the taping I last attended, as the studio got ready to light up its “ON AIR” sign, one of the café’s aproned employees approached me. “Excuse me,” she said in halting English as more people came up the stairs to watch and those everyone already around us scooted their chairs closer to the studio window, “this floor closes at six.” When I responded, in Korean, that I thought there was a podcast going on, she backed away apologetically, but clearly still I’ve got a long way to go before I become a regular. 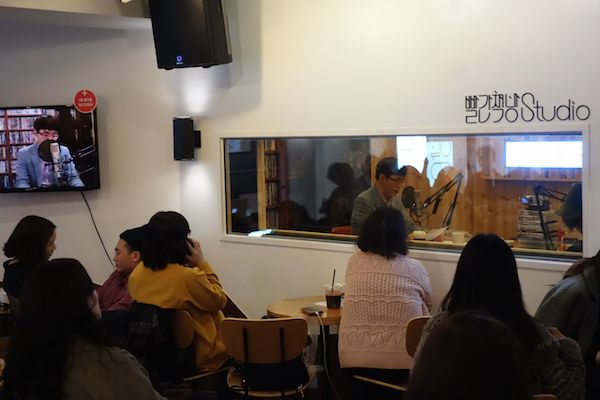