Koreans I meet for the first time tend to draw all their questions from the same well. What they ask starts out basic — why I came to Korea, what kind of work I do, how did I become interested in Korea in the first place — and then gets more culturally revealing. Having asked how long I’ve lived here, for instance, they often follow up with, “Until when will you live here?”, I question I wouldn’t even imagine asking a recent arrival in America. When the subject turns to matters of the table, as in this food-centric society it always does, they almost invariably ask not “Do you like Korean food?” but “Can you eat Korean food?” — a matter not of taste, they imply, but ability. 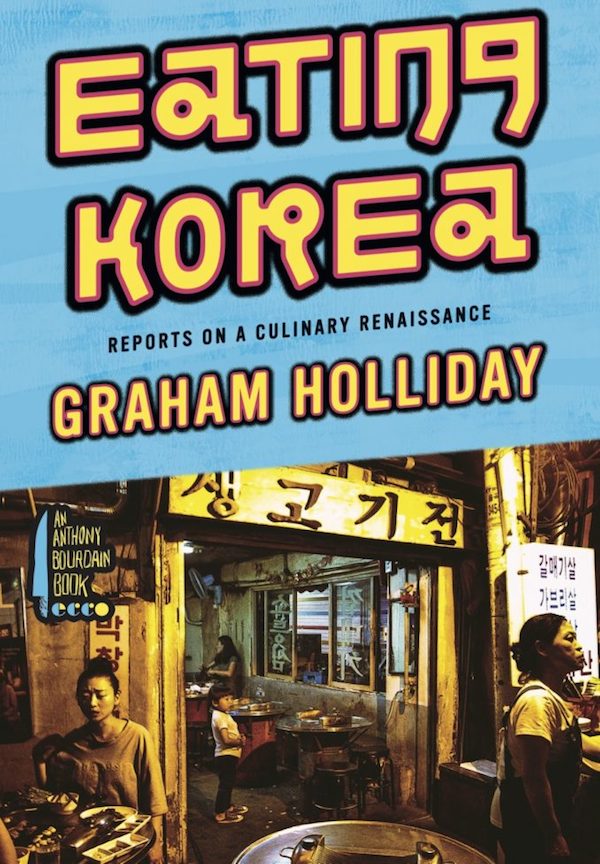 If Korean food is indeed a challenge, Graham Holliday can certainly rise to it, as extensively demonstrated in the new Eating Korea: Reports on a Culinary Renaissance. This eating-driven travelogue, which comes branded as “an Anthony Bourdain book,” has something of the swagger (a word now associated with that wisecracking, peripatetic celebrity chef with an admittedly wearying frequency) that name suggests. Holliday likens eating Korean soups to “entering a boxing ring. Red pepper arrived as a right hook, garlic a blow to the torso.” The stir-fried chicken dish dak galbi is “a violence, a mess, a mistake that works.” A soup, “thick, fiery,” and “blood-red,” drips “delicious violence.”  He observes his order of live hagfish as they “convulsed violently as they sizzled on the grill.”

Of his most gruesome dinner he writes that “ovaries, intestines, blood, cartilage, guts, and stomach smiled up at me like Carrie on prom night,” but elsewhere Korean food proves equally suited to metaphors of concupiscence as to those of carnage: a strong tofu dish is a “nuns and whores slutty swingers’ night,” a famous version of the rice-and-vegetable dish bibimbap a “nipple-tassle-wearing, cigarette-holder-flicking glamour puss.” After all that, a “hangover stew with clotted cow’s blood” strikes him as “an attractive-sounding proposition.” This language brings to mind Korea’s explosion onto the international cinema scene around the turn of the century, when Western distributors pitched Korean film, not quite accurately, as the next big source of the sex- and violence-saturated Asian “extreme.”

An Englishman who’s also lived in Rwanda, Senegal, and Vietnam (and there written the formally similar book Eating Vietnam), Holliday, like No Couches in Korea‘s Kevin Maher, originally came here in the mid-1990s to teach his native language. He spent most of his Korean life based in the rural North Jeolla Provice, which he describes as “the Korean hobnail boot kicking down the door to your taste buds” — the fertile crescent, in other words, of the country’s most flavorful dishes. Not having lived in Korea since the 1990s, he returns having planned a clockwise trip around the entire country, eager to taste once again and write about the pleasures of all the foods he’d come to regard as the best this land’s culinary traditions have to offer, but the truest expressions of its eternal soul as well.

The disappointment begins almost immediately. Holiday eyes a building in Seoul’s popular shopping district of Myeongdong thus: “On the ground floor was a Tous Les Jours ‘authentic bakery’ and a currency exchange stand. On the floors above were a traditional Chinese medicine clinic, an eye clinic, and a language institute; the top floor looked like a storage area.” In all, it presented “a multilayered sandwich of Korean life: fake or bad foreign food, money, health, plastic surgery, and education. I wondered whether the customers in Tous Les Jours really believed they were eating authentic French pâtisserie. And in the eye clinic, how many patients would the surgeon make look less Korean today?” His fulmination continues against young Korea’s cellphone addicts, its cloned pop singers, its dress-alike couples, its “selfie-stick holders.”

What has happened to the Korea he thought he knew? “Twenty years ago, Korea was a developing country,” he remembers. “Most expats who arrived on its shores spent their time talking about when they were going to leave.” Since then the country’s drive to modernize, already aggressive, has accelerated relentlessly. Preparation for redevelopment had reduced many of the remaining traditional hanok, those “old bungalows with attractive, pointy, tiled roofs,” to “were broken walls and shattered tiles.” Worst of all, many Koreans had come to prefer even the fare of a “low-rent, low- grade, subpar, mock Mickey D’s” to their own food. (“Hordes of students lined up to order,” he writes as he stares at one such establishment from the window of the humble Korean snack shop in which he eats his own mediocre lunch. “It was hideous.”)

To Holliday’s mind, all the real Korean eating experiences happen amid the “creaking, collapsing splendor” of the simple old eateries he remembers, often run out of shacks by middle-aged or elderly women. He pines for “tabletop grills, for floors strewn with empty bottles, loud, rude customers, smoke, rough service, peeling walls, and stifling odors,” finding nothing more reassuring than the presence of a roll of toilet paper hanging off the wall, long the closest an everyday Korean restaurant would come to providing a napkin dispenser. He even comes up with a formula, difficult to disprove, for the ideal Korean dining experience: “shed + pavement + good, fresh food + cheap, crappy booze = good times,” although for much of the Holliday’s trip, it seems like these good times will soon come to an end.

Not for Holliday the new wave of  Korean “fusion” cuisine displacing it, served in places like the “modest crevice” in which Eating Korea opens. After a longtime British expatriate friend insists he try a kind of “fruit cake pizza” there, he brings it up seven more times throughout the rest of the book: first as an example of everything he sees as having gone wrong with Korean food in the past two decades, then as an example of what he begins to suspect he’s failed to understand about the evolution of Korean food in his absence, and finally, most positively, as an example of “a long tradition of alchemical experimentation” that has historically encompassed “live baby octopus,” “piss-fermented skate,” and the marriage of “Spam with kimchi, hot dogs, and baked beans,” all of which Holliday describes in detail in the book.

Still, he doesn’t quite end his journey a true believer in the increasingly and often strangely Westernized dishes enthusiastically consumed in Korea (which in his day “had never heard of cheese and would have grown nauseous at the thought of fruit cake”), and current Western expatriates here may well sympathize with him. Many of us would echo both his minor points (such as that “if there truly were a loving and compassionate god, Korea’s pizza trade would have been erased from existence decades ago”) as well as his major ones, the latter having to do with Koreans’ apparently willful ignorance and active destruction of their own heritage, culinary or otherwise. And so Holliday sees his meals — the buckwheat noodles in the countryside cabin, the cow’s-head soup in the small-town market — as “anchors to a past that wasn’t fading from view so much as being blindfolded, shot, and slung into a shallow grave.”

As an elegiac east Asian travelogue, Eating Korea has more than a little in common with The Inland Sea, Donald Richie’s 1971 search in Japan for “the last places on earth where men rise with the sun and where streets are dark and silent by nine at night,” and to an extent even Alex Kerr’s bitter indictments of that country’s ruination by the once progress-obsessed Japanese themselves. Among literary journeys through Korea, Holliday’s comes closest his countryman Clive Leatherdale’s To Dream of Pigs, a highly enjoyable obscurity with relatively little to say about Korea’s food, but much to say about the encounters to be had when passing through its less-popular destinations. Leatherdale did suffer the impediment of lacking the language almost entirely, though Holliday (who perhaps, like many English teachers here, found the job itself an insurmountable obstacle to attaining functionality in Korean) can’t salvage much more from his memories of his years here beyond the basics.

“I could still swear, if required, and I knew enough to know when someone was asking me where I was going,” he writes, but his meaningful conversations, when not engaging the services of an interpreter, remain limited to those with fellow Westerners (including the LARB Korea Blog’s own Charles Montgomery) and English-speaking Koreans, who even when complaining about the Westernization of Korea come off as highly Westernized themselves. No rebuke to their homeland comes more easily to such a Korean than claiming, often disingenuously, not to enjoy what Holliday calls the “sour rocket assault” of kimchi, indisputably the representative national food and an element without which no Korean meal can feel complete.

They’ve also engaged in other forms of programmatic rebellion: Holliday remembers a young Korean woman named Jin he met as a student back in England who displayed “a militant attachment to miniskirts and smoking” due simply to the fact that the conservative Korea in which she grew up frowned on both. Like a misbehaving teenager, she saw Korean society’s imposition of standards of propriety as reason enough to flout those standards. When he asked her what to see in Korea, she advised against anywhere but the two biggest cities of Seoul and Busan. When he asked why she didn’t recommend the “real Korea” lying just outside those metropolises, she answered even more tellingly than she may have realized: “It’s bloody boring.” Early in his travels, Holliday rents an apartment in Seoul from a thirtysomething Korean woman who, raised in Iran and Uzbekistan educated partially in America, similarly flaunted her “outsider” status, repeatedly referring to her fellow Koreans, he notes, as “they.”

Another, an English-name-using former BBC correspondent in Seoul, speaks of the “shame” Koreans have felt at letting foreigners see, let alone eat, the unpretentious, unsubtle food they really enjoy. But another, the tattooed Korean wife of an American friend, foresees another kind of shame, one associated with the results of all cosmetic-surgery procedures so popular among Koreans today, which leads Holliday to the theory that “one day Koreans will be proud of how they look,” that a campaign may launch “to make Korea Korean again, to save Korean Koreans from becoming extinct,” “and that “a yearning for the real, not the artificial, would mark Korea’s final step up to confident, assured, developed-country status” — a yearning that, perhaps, will extent to Korean food.

Perhaps it already has: some of the surviving rough-and-ready restaurants across the country in which Holliday luxuriates have begun to acquire a younger clientele, the members of which come for the sorts of dishes their mothers or grandmothers made. Even the Jins of the world can presumably acknowledge the appeal of a good Korean meal, the entrée into the culture, or back into it, for many a bewildered foreigner or disaffected native. Korean food has also provided a point of entry for quite a few returning adoptees eager to learn about the homeland they never got to know, some of whom go on to work with it professionally. (Just before moving to Korea myself, I met an adoptee who’d started up a Korean restaurant in Raleigh, North Carolina despite never having set foot here.)

Time, which seems to move considerably faster in this constantly changing country than anywhere in the West, will surely prove some of Holliday’s predictions right and others wrong. Whether the Korean food he loves endures, vanishes, or evolves into a different eating experience entirely that nevertheless provides the intense flavors and equally intense conviviality it has for the better part of a century, Holliday himself will emerge with dignity. Why? Because in the course of Eating Korea‘s more than 300 pages, he never once reduces himself to writing the words “Seoul food.” 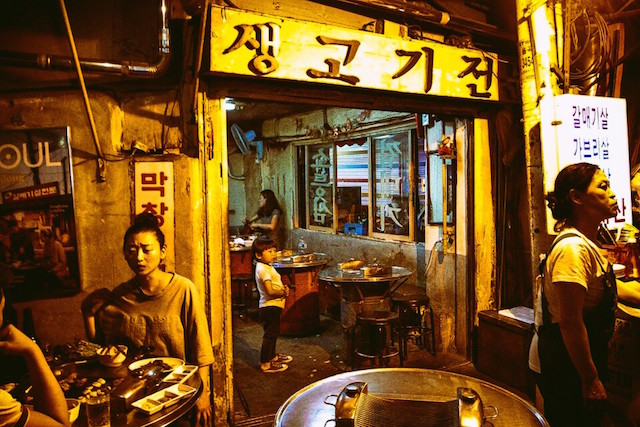