Just before moving to Korea, I took a road trip across America, from southern California to North Carolina. An early overnight stop came in Flagstaff, Arizona, a city overlooked by the Lowell Observatory, a scientific institution (and now tourist attraction) founded in 1894 by Percival Lowell, the American astronomer whose research led to the discovery of Pluto. The observatory grounds feature an exhibit about the man himself, and having a look at it I noticed the photo above, in which Lowell sits among a group of 19th-century Koreans, and below it a first edition of his book Chosön, the Land of the Morning Calm: A Sketch of Korea.

It came out in 1885, just a couple of years after Lowell first went to Korea as a foreign secretary to the diplomatic Korean Special Mission. Having got the inspiration to travel to Asia from a lecture on Japan he attended in 1882, he remained there for quite some time, going on to write other such non-astronomical volumes as The Soul of the Far East in 1888, Noto: An Unexplored Corner of Japan in 1891, and Occult Japan, or the Way of the Gods in 1894. You can follow the links to download all of them for free from the Internet Archive. Chosön, the Land of the Morning Calm, the first of them, also counts as the first full-length English-language personal narrative of Korea. 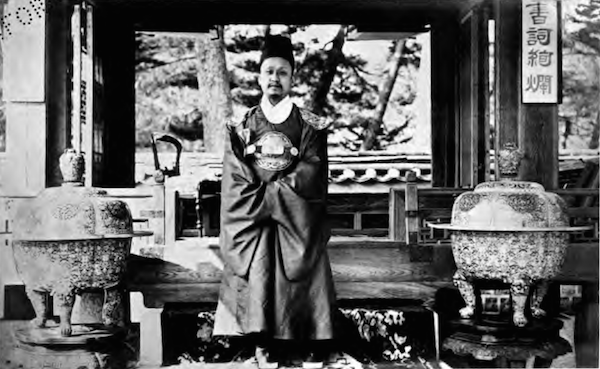 It also still counts as one of the richer full-length English-language personal narratives of Korea yet published, and quite possibly as the most thorough: Lowell divides this 400-page book into chapters on everything from the country’s geography to its climate to its government to its architecture to its principles to the many hats (literally) worn by its people. All fascinating stuff, and all suitable material for a man of such wide-ranging curiosity, but some modern readers may come up against difficulties right away with the structure and style. Lowell wrote like the scientist he was, not in the English-as-a-third-language way some scientists do — I find much to admire in his prose, the occasional Victorian excess aside — in the way of someone who regards detail and precision, especially pertaining to the natural world, as ends in themselves.

Any first-hand account of Korea, and especially one written in the temperature control-challenged 19th-century, has to say something about the weather. But Lowell almost begins his book with it, having said little about the Korean people but, apparently working his way up to the social after laying as thoroughly as possible a foundation of the natural. He dives deep into the effects of the deflection of the mean annual isothermal line. Elsewhere in the book, he adds his personal experience of the weather, such as his struggles with the cold weather and with the heating systems of the day, a seemingly uncontrollable early version of the now widely used underfloor ondol (온돌) heating, too slow to heat and too hot thereafter, operated by overzealous if somewhat inattentive servants. “I was the victim of the too complete fulfillment of my own previous desires,” he writes, “for I myself had unwisely urged them to feed bountifully the flame. Then I yielded to misery. I reflected upon the exceeding vanity of human wishes.” 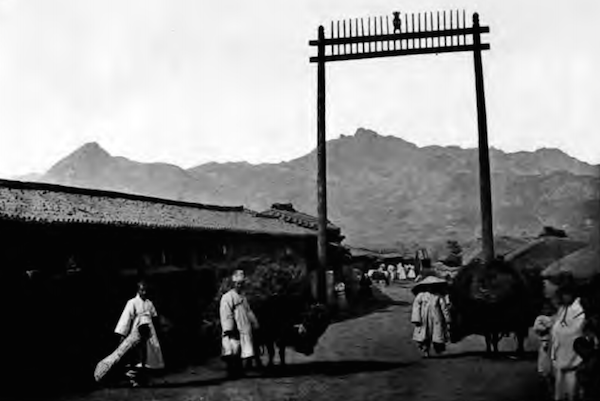 Lowell tells of other old-time Korean discomforts with amusing vividness, such as the only means of long-distance travel available in a country without the wheel (“the thing remains uninvented,” he wrote): “Of the essential properties that commend any method of conveyance, speed and bodily comfort, neither, to our notions, is a conspicuous feature of the Korean palanquin.” In this and other respects, he here and there argues, Korean civilization of the 1880s hardly benefits from comparison to that of China or Japan. The same sort of observations come up in subsequent Korean travelogues by other writers in English: of the harshness of life there, the crudity (or indeed nonexistence) of the infrastructure, the colorless aesthetic of common society, the rigid hierarchies, the women shut out utterly from public life, the deep-seated superstition and indolence. “The servants were as incompetent,” he declares at one point, “as the appliances were wanting.”

But Lowell finds about as much to appreciate as he finds to gripe about, and so Chosön, the Land of the Morning Calm also sets a precedent for the sympathetic Korean travelogues to follow, in which the author’s countless irritations with the place give way — or at least lose the upper hand — to a kind of admiration: sometimes grudging and often amused at points of seeming inferiority, but admiration nonetheless. And on the whole, his attitude provides an example even today’s Western observers of Asia would do well to follow: “There is among us a prevailing impression that the far East — China, Korea, and Japan — is delightfully but hopelessly odd, and that the interest attaching to these lands lies solely in this irrational oddity,” and, simply accepting this perception, “partly from want of opportunity, partly from neglect, we open the eyes, shut the brain, and think we see.” (It also helps that, unlike many writers on Korea even now, he displays an understanding of the language.) 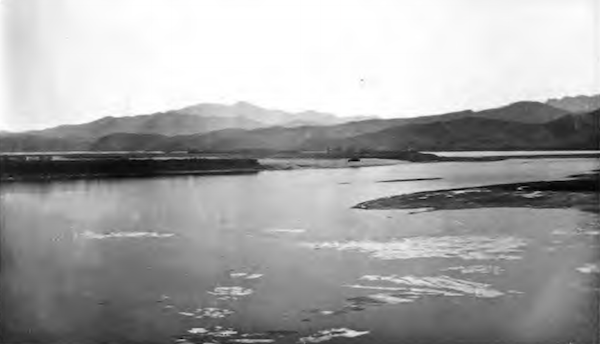 Lowell keeps his brain open, and as a result sees Korea with such clear eyes (in his prose as well as his photographs, a selection of which appear here) that his account holds up today in its revelation of both how much and how little has changed here in the past 130 years, a period at the beginning of which “Korea stepped as a debutante into the society of the world.” First, to the differences. Not only has Korea found out about the wheel, they’ve put up a high speed train that can deliver a modern-day Lowell from Busan, his port of entry to Japan, to Seoul in under three hours, rather than the days and days over sea and land the trip required in the 19th century. And when he got there, he certainly couldn’t make the observation, as Lowell did, that “there is not a single religious building in the whole of Seoul” — not only but most obviously because of all the Christian churches and their blazing red neon crosses that have sprung up since his day.

Only a rare Korea resident reading the book in the 21st century — or even in the second half of the 20th — could stifle their laughter as Lowell offhandedly explains that “nothing in Korea is ever done in a hurry.” Few discussions of Korean society today can avoid coming around to the so-called bballi bballi (빨리 빨리) way of doing things, which elevates hurry to the highest virtue. That sudden shift in the speed of life here, which happened alongside the sudden shift in economic growth, gets the blame for all sorts of things laid at its feet, not least the shattering of the imagined peace and quiet implied by the nickname Lowell popularized with the second part of the book’s title. 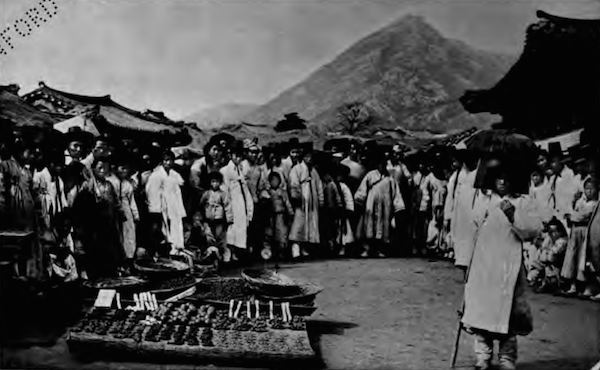 The first part of the book’s title, though romanized in a now-outdated fashion, served to remind us that, when Lowell went to Korea, he went during the tail end of the Joseon Dynasty (조선 시대), which lasted five centuries from 1392 to 1897 and now provides the setting for the vast majority of historical films, television dramas, and novels that come out. (They pay rather less attention to the Japanese colonial period whose gears started turning thereafter.) But those modern Joseon stories tend to involve women, whereas Lowell’s Joseon experience, apart from his attendance at parties with hired geisha-like professionals and a desperate attempt to photograph a a woman who ran away, scandalized, before he could even set up his camera, leads in to declare that “in Korea woman practically does not exist.”

“Materially, physically, she is a fact,” he explains, “but mentally, morally, socially, she is a cipher.” That was not, of course true, and the segregation is over. The public spaces of Seoul, to an outsider free to roam them during the day, now feels as much like a world of women as it felt like a world of men to Lowell. The men of Korea are shut away in their offices, a sign that gender equality is still far off. In a sense, women have led the way in the cosmopolitanization of the capital as well as other cities, patronizing each new wave of cafés, restaurants, and other gathering places while the men, according to the stereotype, remain in more traditional spaces, grilling meat and draining bottle after green bottle of soju. 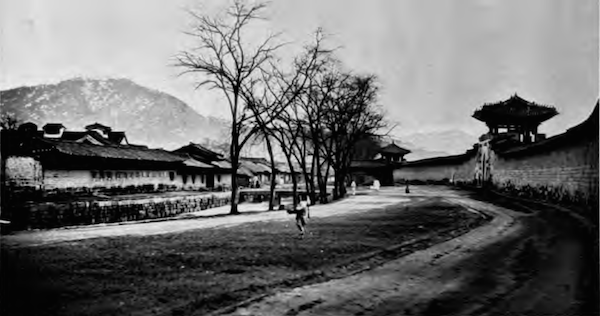 Not that the women of Korea, now free to eat what and where they please, readily turn down an evening at the barbecue themselves. Lowell names as “one of the most salient of the national characteristics” an “insatiable appetite,” in thrall to which “the average Korean does not eat that he may live, but live that he may eat,” with the result that “to the average Korean, it is always meal-time.” The culture of eating remains strong still, as does the culture of smoking, a practice that Lowell found “as common in Korea as in Japan; that is, everybody smokes — all the time,” and those who don’t often have to make elaborate excuses not to partake while everyone else around them does. But Korea, more so than Japan, looks lately to have begun turning its back on cigarettes, and in that the women have also taken the lead, and by a wide margin.

The similarities, though, stick out even more than the differences. “The greater part of the steamers that ply there are not what they might be,” Lowell writes of the waters off Korea’s west coast, adding that accidents “happen at intervals.”. Disasters at sea and elsewhere, most recently in April 2014, and any other elements of Korean life people find objectionable, are often blamed on the lingering ill influence of Confucianism. Lowell describes Confucianism as something that has been “artificially, because arbitrarily, prolonged, and has long since outlived its usefulness,” especially in the form of filial piety, which he describes as “the one great moral principle of the far East. All others exist, as it were, in abeyance. Truth is unknown, honesty largely out of practice, and chastity a luxury wherever it is a fact.” 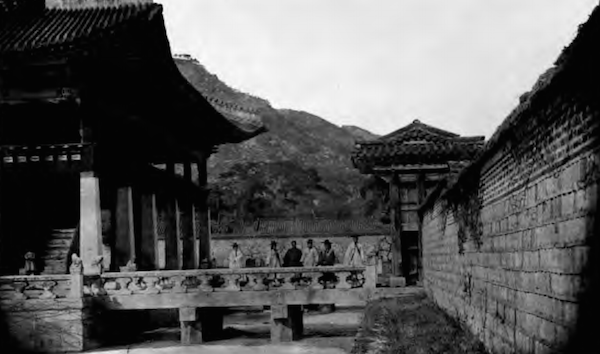 Yet despite these complaints, Chosön, the Land of the Morning Calm doesn’t read like a work written out of frustration. He hates uncomfortable palanquins and what he sees as the shiftless, constantly hungry “coolies” hired to carry them, but usually Lowell withholds judgment, and sees better. His was an undivided Korea of 12 million people, with few roads and no tall buildings; and withholding judgment yields even more insights in the high-tech, hypertrophied 25-million-strong capital of South Korea of today.

“It is a curious case of partially arrested development,” writes Lowell, assessing the state of the Korea he found, marveled at, and ultimately warmed to. “The evolution of the fundamental principles was checked, while the superficial details of civilization went on growing.” Whether those fundamental principles have changed in the past 130 years it falls to modern Koreanists to determine, but boy, did the civilization ever keep on growing. Has that subsequent development been all to the good? Has it been anywhere? Does Korea remain, if not a land of morning calm then, as Lowell put it, “a thrice happy land, indeed, where a man does not make love to his friend’s umbrella”? If you want to know what that means, well, you’ll have to read the book. Rest assured that he explains it all there, to the best of his ability — and in detail. 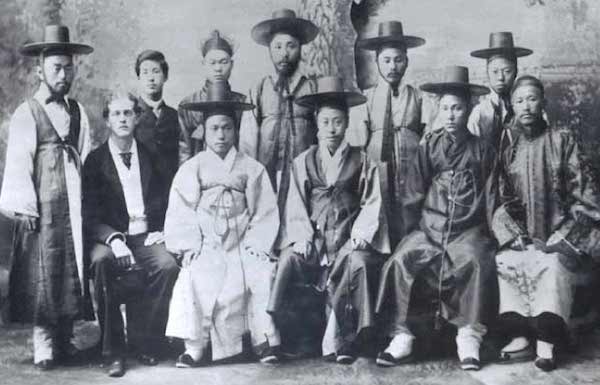