This is the ninth in a series of episode-by-episode reflections on Orphan Black season 5 (preview; episode 1 ; episode 2; episode 3; episode 4; episode 5; episode 6; episode 7; episode 8). These pieces do not provide thorough plot summaries but do include spoilers; they assume readers have already been viewers. Responses via Twitter continue to be very welcome!

One of Orphan Black’s many virtues is its refusal to separate sexuality from the rest of life, especially parenthood and death. In the series’s penultimate episode, Helena’s labor toward childbirth displays once more how profoundly agency matters for all three realms.

As we have long known, Helena’s cultic mentor had perverse reasons for calling her “special.” Raising the girl as a killing machine, Tomas programmed her with a warped theism in which her clone victims were heretical copies, “walk[ing] the earth while the original is at home with God.” Notice, though, the subtlety with which Orphan Black constructs Helena’s psychology. Her explicit rationale was that these “science devils” threaten their archetype, but the deeper reason was that their sexuality seemed sacrilegious. They were, as the show has often called them, “abominations.” Despite extensive differences in character and subculture, their outward homogeneity threatened the hierarchical divisions built into the logic of patriarchy.

In this sense, the show again takes advantage of a unique capacity of cloning narratives. Orphan Black engages homosexuality most obviously and extensively through Cosima, Felix, and other LGBTQ characters, but it also more subtly figures the experience of clones as inherently queer. In celebrating the intense loyalty among women whose DNA matches even more fully than most humans’, but who are culturally bound to conceal their relationships, the show both references lesbian experience and reminds its audience how strange it is that we live with so little consciousness that we are genetically 99.9% alike. This is what drives the dissonance between the Troggs hit song “I want to spend my life with a girl like you” and the young Helena’s narration as she rubs matching naked female dolls against each other: “Filthy dirty copulators. You touch yourself too?” After she spits on the plastic heretics, Tomas explicitly identifies them with the Leda clones, instructing Helena to “tell me about the copies.” This alignment of cloning, deviant sexuality, and blasphemy is affirmed once more as an adult Helena completes final preparations for her first slaying. “Dirty copies, they pervert his original, his light,” she mutters.

This is the climax of a longstanding theme in Orphan Black: we are genetically almost indistinguishable, yet those minute biological differences, along with enormous distinctions in nurture and in choice, make each of us special. As season five repeatedly acknowledges, however, this is more easily stated than internalized. How exactly do we grant another being the full dignity of personhood? Moreover, in a digital age that makes it possible to know so much about so many other lives, how do we grant it to ourselves? To accept herself, Alison must walk away from suburban conformism; Rachel must recognize that no surrogate father (Ethan, Leekie, or Westmoreland) or “daddy” (Ferdinand) will ever completely fulfill her yearning to be loved.

For Helena, self-acceptance requires letting go of the need to be (the) original. When she is tortured by memories of her first victim’s face, one so like her own, Tomas revises his story so that Helena is herself the original. For a time, this lets her justify more killing, but eventually, the lie collapses. We have watched across five seasons as Helena has surrendered weapons with which she might have killed Sarah, Rachel, and her other sestras; now, rocking with contractions and tortured by memories, Helena swerves toward the opposite pole of Tomas’s binary. If she is “not special,” but “a copy like my sestras,” the show’s religious and scientistic cults agree that it does not matter if she lives. Indeed this is one of the forces that thrusts the surgical scissors into her wrist: shame.

Shaming could not be more central to the culture of Neolution. It is what Coady relies upon when she tells Helena, “I know who you are. Dumped at birth. A killer. You killed your own sisters. You stink like an animal. What kind of mother could you possibly be?” Shame is the tool Westmoreland wields when he tells Sarah, believing her to be Rachel, that he knows all of her secrets, even “how you touch yourself in the shower where you think it’s clean.” There is nothing clean or whole in Neolution’s world, only a zoomorphic disdain for other human beings that is no less problematic than mawkish anthropomorphism of animals. By contrast, the love among the sestras insists that “beasts” like Helena and Yanis — both of whom were raised in Eastern European orphanages — are full representatives of Homo sapiens. Like MK, who was also comfortable in the forest, they may be hungry, but they are capable of self-sufficiency. They may react defensively, but they are capable of enduring loyalty.

As we have seen many times, Helena is a particularly instinctive ally of infants and children. Appropriately, the season five episode focused on her character comes just before the series finale, making clear how much Orphan Black has always been about parenthood, not just sisterhood and brotherhood. It is this commitment that aligns Helena with Siobhan even as it separates her from Coady. In the space of a single episode, we move from the funeral of a mother who accepted death on behalf of her foster children to another woman’s choice to follow orders and murder her adopted son. “S” is the fiercest mother hen one could imagine, wanting nothing more than her family’s liberation from corporate exploitation. Coady, on the other hand, embodies the worst of objectivism, allowing herself only a brief sniffle after she accedes to Westmoreland’s expectation and “puts down” the last of her clone sons.

This is the context in which we must interpret Helena’s suicide attempt. Plunging the scissors into her wrist, she embraces the way of Siobhan, the woman who once surrendered her to Coady’s vile experiments. In season four, Kendall Malone had defied death when she told Cosima, “no tears”; in season five, “S” followed her mother’s lead, writing to her children and granddaughter, “Just remember, my loves, death is nothing at all. I have only slipped into the next room.” Similarly, but with even clearer expectations of the outcome, Helena looks past any fear of death and seeks to kill herself to save her children. While partly succumbing to Coady’s contemptuous words and fears of her unworthiness, she is also flouting Neolution’s endless demands on her body. “My babies, you deserve better than me,” she decides. “You will not be an experiment too. I set you free, my babies.” Like Siobhan, she chooses emancipation, disregarding the cost.

This is not the first time Helena has moved in this direction. She has risked herself for her sestras and their families many times, but perhaps no earlier scene stands out against this episode’s events so fully as her decision on behalf of a man she had never met. Back in season three, episode four, she was also imprisoned by Neolution forces. After escaping her cell, Helena searched for a way out of the larger paramilitary compound in which she found herself, but then came across one of her Castor brothers. The top of his skull had been removed and his brain was exposed; he had become Coady’s living dissection. Taking precious time to euthanize the man, Helena comforted him, “I will make it go away. No more pain, little one. Shhh. Sleep now, lamb chops.” Her act was merciful, but it ended up costing her own chance at freedom.

Helena’s suicide attempt near the end of Orphan Black’s story is essentially another decision to undertake euthanasia. Here it is even more significant because of the way it simultaneously mirrors and condemns Coady’s readiness earlier in the episode to “put down” Mark. Helena’s choice in season three had been direct, honest, and welcome to a man whose life had become nothing but suffering, whereas Coady’s choice in season five is one last abuse of a man who had just been married, who believed life was finally unfolding before him. Helena’s choice was personally costly, resulting in recapture; Coady’s is only another submission to Westmoreland’s domination.

And so we return to Helena at the end of episode nine, legs spread, locked in the most vulnerable of positions, stabbing herself. Her calculation is simple: regardless of whether she delivers her babies naturally or Coady completes a C-section, Helena is convinced they too will become lab rats. As it turns out, her self-sacrifice proves unnecessary, and Sarah provides a blood transfusion just as she needs it. This enables one last parallel with the scene in season three. There, after freeing her Castor brother from Coady’s experiments, Helena had spat, “You say you love boys, but you lie. You’re a shit mother.” Here she finally has her vengeance, apparently dispatching Coady only moments before she will give birth, and uttering just two words: “shit mother.”

In the first episode of season five, Rachel proclaimed the glories of The Fountain to the people of Revival, and I noted the crucial distinction between her demands “to be brave, to sacrifice” and the voluntary nature of authentic self-sacrifice. Now, entering Orphan Black’s twilight, we have seen once more that agency makes all the difference, whether the issue is sexual preference, euthanasia, or parenting. The question is never who is ready to sacrifice others, but who is willing to risk themselves. 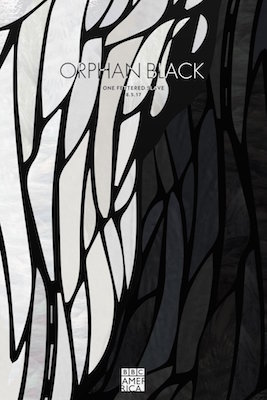