Time to take a break from the history of Korean literature and talk a little bit about three recently published works, each of which shines a light on a particular aspect of the Korean experience: one story and essay collection that shines a light on Korean literature under colonialism and just after; some “international” Korean fiction; and a lovely if voluminous manwha (or graphic novel) on man’s struggles with the city, the countryside, and himself.

To begin, Sunset: A Ch’ae Manshik Reader is a kind of grab-bag containing works written from 1924 to 1960, including short stories, plays, roundtables, sketches, a fable, and a memorial.  And yet taken together, these disparate works reveal a very unified tale: the exigencies of living in a country buffeted by winds beyond its own control. Ch’ae is most famous for his satires (Peace Under Heaven and My Innocent Uncle), but these works demonstrate the considerable political tensions of the times as he grapples with his partly collaborative role in colonial Korea, often looking back with humor, at his life and Korean society. The book is translated by the ever-able Bruce and Ju-chan Fultons, the former of whom contributes an illuminating foreword.

From the amusing “Sunset,” with its droll but pathetic battle between the narrator’s father and the obese Hwangju Auntie to the surprisingly modern and bleak portrayal of opiate-addiction in “Ungrateful Wretch” to the clever studies of social and sexual relationships “In Three Directions” and “Juvenesenility,” Ch’ae spares none of his characters, yet portrays them all with a certain affection. Several short sketches show just how few words he needed to fully reveal the essence of his society and characters. The other, assorted, works are equally illuminating. This one is worth picking up.

Over the past 25 years, as mentioned in my last post about Korean modern literature, Korea’s fictional horizon has blown well past the country’s geographical borders. Characters of all sorts and in all places have begun to inhabit Korean fiction, and Jeon Sungtae’s Wolves, a collection of ten short stories, marks an excellent step to this evolution, placing its heart in Mongolia, that borderland between city and steppe, modernity and antiquity, local and global, socialist and capitalist.

The first story, “The Magnolia,” is about a Korean restaurant in Ulan Bator where characters discuss life, philosophy, politics, and occasionally even touch on Korean literary figures. Like Ch’ae, Jeon has a facility with characterization — drunken Korean tourists, high on booze or religion, are introduced and inspected in relatively few words — but economic existence and alienation are at the core of these stories. In “Wolves,” the narrator finds he “can feel my soul slowly falling apart” as a Korean customer begins to grind him down. “Korean Soldier” neatly outlines the otherness and impotence a “foreigner” can feel in another country.

The narrator of “The Second Waltz,” a Mongolian woman named Nyami, is hobbled by the romanticized and controlling images of women that date back to Mongolia’s socialism. “Chinese Fireworks” presents a Korean pastor’s interaction with Mongolia’s modernization, as he inadvertently finds himself an important part of the economic food-chain of local homeless children. “River Crossers” is a tragic defection story. “Has Anyone Seen My Shoes?” features bawdy overdrinking, a sort of bigamy, and the two shoes of the title. “Kids Need Money Too” is obviously autobiographical, and “Imitayshun” begins as an amusing story about the dance between a mother, principal, and foreign hagwon (or after-school academy) teacher before turning into something much more serious. Sora Kim-Russell’s translation, typically literary and clear, preserves Jeon’s intricate and careful plotting.

A doorstop of a book nearly two inches and 600 pages thick, Yeon-Sik Hong’s Uncomfortably Happily is — happily — a manhwa that can be read at a good clip. Its story is autobiographical: in 2006, Hong himself moved from Seoul to the countryside, a relocation that did did not come without its trials. The character “Hong” and his wife Sohmi are struggling artists who have moved from the busy chaos of the capital to a house in a place they call their “bamboo mountain.” There winter is endless, and money is anything but. Even minor issues loom large in the couple’s isolated situation. As they struggle through as best they can, it becomes evident that their problems have nothing to do with with their location, except insofar as that location is within themselves.

Hong longs for success (or is perhaps infuriated by his lack of it), but procrastination, self-loathing, and more anger than he can conveniently contain cripple his work. His wife, in contrast, does enjoy a notable bit of success. Hong’s coming to understand himself and his marriage is the heart of the story. Beneath the details of the plot lie the love and commitment that Hong and his wife feel for each other, giving the work a universal theme that should hold the interest even of readers who may not catch all the novel’s cultural references. Hong, the artist, includes long flashbacks, digressions, scenes of fantasy, and a touch of modernism in the narrative. When Hong the character tries to concentrate on his work, his head splits open to reveal the distractions lurking within; his own characters escape from the page to badger and worry at him.

Sometimes his worries multiply so quickly that they threaten to first fill, then explode his work. The artwork, which the back cover describes as ranging “from the gently pastoral to the surreal and harrowing,” has similarities to that of Lynda Barry in its simple depiction of people and Shigeru Mizuki in its mix of realistic and impressionist elements in the landscape and background. The translation, by Californian cartoonist Hellen Jo, is perfect for the cartoon format. Uncomfortably Happily is clever, charming, and worth a look if you are interested in a droll family story, graphic novels, or an introduction to a wide range of Korean modern culture in a primarily visual format.

All these three works may be quite different in style, subject, location, delivery, and themes, but at the same time, they share the ability to put a reader into a Korean moment and place and explore it both thoroughly and comprehensibly, whether it be a moment in colonial history, the expansion of the Korean literary imagination to the wider world, or the very narrow story of a family “trapped” on a hill. As little as they may seem to have  in common at first, all reveal important aspects of what it means, or has meant, to be a Korean. I’d buy them all.

Koreans in Strange Lands: The History- and Culture-Saturated Fiction of Jo Jung-Rae

Finding Breezy Humor at the End of the World: The Stories of Kim Mi-Wol 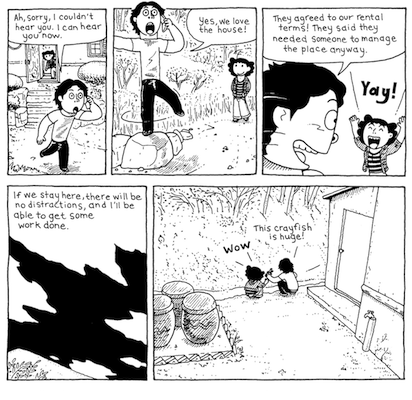