As it spreads across the world, Starbucks has come to serve many functions, not least giving the kind of travelers inclined to complain about the global homogenization of place an Exhibit A to point to. Such travelers make those complaints with a special intensity when in Seoul, which in addition to a robust local coffee-shop economy boasts the highest number of Starbucks locations per capita of any city in the world. I take a slightly brighter view of the green mermaid’s ongoing journey from Seattle to omnipresence, and not just because they offer those twin lifebloods of the 21st-century writer, coffee and reliable wi-fi: Starbucks stores, despite and indeed because of their efforts to hold every aspect of their experience steady across cities, countries, and continents, have ended up becoming the places where pure contrast forces the host culture’s deepest-seated characteristics into view.

Not that you’d know it at first glance — nor, sometimes, at a closer second glance, which in a Korean Starbucks might well take in the baristas’ nametags, nearly all of which bear, in bold, chalky, Roman capital letters, names like SALLY or RYAN or ANGIE. You’d expect that in Denver or Syracuse, but in the capital of South Korea, let alone the much smaller towns all over the country, and pinned to the chests of an all-Korean staff serving a mostly Korean clientele, the effect is surreal. It turns out to have come down from corporate: “Starbucks staff are required to have nicknames,” writes the Korea Times‘ Kim Young-jin. “The reason, company officials say, is to create a culture in which all ‘partners’ are equal.”

That in opposition to Korea’s established corporate culture, “notorious for long working hours and a rigid chain of command,” where employees, as a rule, address each other not by name but a title that locates them unambiguously in the organizational hierarchy. More than a few Korean companies have followed Starbucks’ suit. “Kakao, one of South Korea’s largest Internet companies, decided three years ago that all employees would go by English nicknames,” writes Rachel Premack in the Washington Post. Additionally, “companies in English education, tourism, trade or other globally focused industries typically have English nickname policies. They want to accommodate foreign business partners who can’t decipher between Lee Ji-yeong and Lee Ji-yeon.” 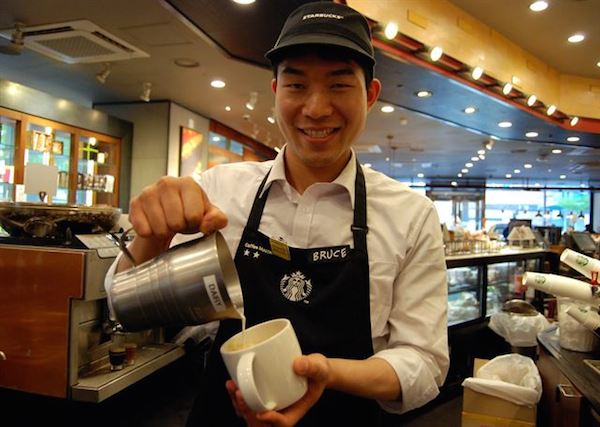 This takes me back to my earliest Spanish classes in grade school in America, when our teacher assigned each of us a Spanish name. Yet unlike students in Korea studying English — which is to say, practically all students in Korea — I had no intention of actually introducing myself as Carlos to anyone outside the classroom, where using it already felt ridiculous enough. Yet so many Koreans today, even those not employed by Kakao or Starbucks, seem to feel obligated, when interacting with non-Koreans, not just to speak English but to call themselves by English names. As with the Korean language, which common belief holds that foreigners have difficulty learning and thus shouldn’t be expected to use at all, so with Korean names.

And as the practice of speaking English for the benefit of foreigners harbors a number of rarely questioned assumptions, so does the practice of assuming English names for the same professed reason. Give a foreigner a name clearly adopted chiefly for the purpose of interaction with foreigners, and that foreigner will, on some level, receive the message that they’ve been assumed unequal to the task of learning your real one. Not to say, of course, that the practice is unique to Korea, even within northeast Asia: English names have also become de rigueur in the urban centers of China, in part on the same premise that native ones are “hard for foreigners.” Point out that the Japanese have for the most part stopped using English names, and the usual response is that Japanese names are “easy for foreigners.” Never mind that watching Japan-themed movies from even 30 years ago reveals just how many ways Americans once found to mangle them.

This has brought about a backlash, if a minor one: my own expat circles in Seoul include professors who refuse to acknowledge their students’ English names, and at least one American who only calls his Korean girlfriend by her English name — “Mia” in place of Dahye — when aggressively trying to get her goat. Ridicule of this kind does ultimately come down to a deeper question: what, exactly, is an “English name”? Koreans certainly haven’t limited themselves to the names identifiably originating from England, though the English translation of the Bible and English-language sitcoms have both proven enduring sources of inspiration. Some have gone the much odder, though in its way preferable route of either literally translating the meaning of their name — Enun-hye becomes “Grace,” Ji-hye becomes “Wisdom,” Sae-bom becomes “New Spring” — or simply picking a favorite English word, name or otherwise, that sufficiently resembles their Korean name. (Premack talks with a Kakao employee named Hwang Yun-ik who goes, at the office, by Unique.) 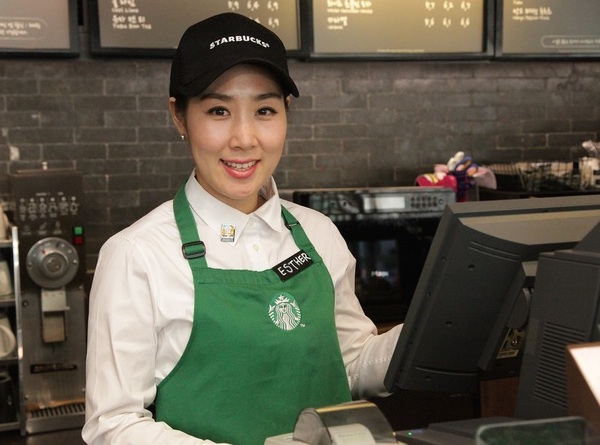 In the same way that Westerners have a hard time getting their minds around so many Koreans’ willingness to change their faces with cosmetic surgery, they also struggle with Koreans’ willingness to change their names. As I previously noted on the Korea Blog in a piece about the culture of face-alteration (and that of most other body parts as well) here, Koreans lead the world in changing their given names in adulthood. The fact that so of them choose from the hot names of the moment would look, in America, like a few thousand grown Johns, Roberts, and Davids each year becoming Bradens, Jadens, and Cadens — at least one of two of which I’ve also seen written on the nametags of Korean Starbucks baristas.

But then, it’s not too broad a claim to say that given names simply don’t matter in Korea in the way they do in the West. With titles used near-exclusively in the family and the workplace, among other hierarchies, you can go years and years here without ever learning the full names of your superiors in the company, or even of your own relatives. (I recently heard of a grandfather who encourages his grandson to do the otherwise unthinkable act of calling him by his name because, addressed as a Korean man of his age is by a variety of high honorifics and without many childhood friends of his own left, he hardly ever has occasion to hear it.) Koreans simply have to get used to going by a different name in each social context, and in that sense “Bruce” or “Esther” may differ little from “Director” or “Team Leader.”

Yet for non-Koreans, and especially Westerners, something about English names as used in Korea still rankles. Maybe it has to do with the disregard they evidence not just for the users’ cultural origin but for those of the names used, just one more category of thing once rooted in specific Western cultures but now cut loose and treated as global property. But then, no country takes quite as much of the blame for that as the United States, and especially the United States as it manifests in an export like Starbucks, which took shape as it first spread across the country as an Americanized version of the traditional Italian coffee-bar experience. It its current form, it fits right in with the image of the West widely on offer in Korea, a denatured mishmash of America and Western Europe that seems to hold endless appeal. Even I enjoy stopping into a Starbucks now and again, and on a recent visit I actually saw an encouraging sight: a barista wearing a nametag that said “MANGO.” Not exactly Korean, sure, but it’s a step in the right direction. 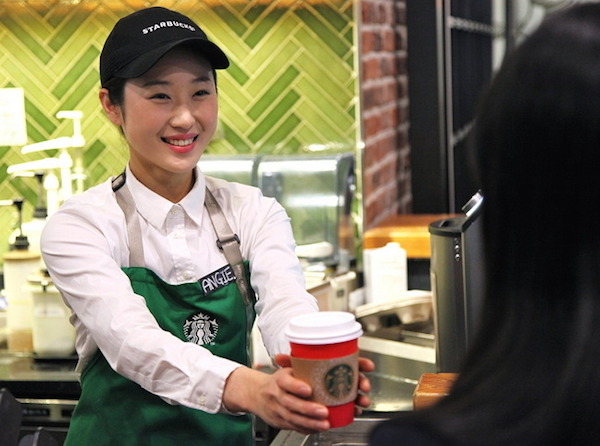