Cast your mind back, if you can, to the internet of the late 2000s, through which blew a fierce blizzard of Stuff White People Like copycats after copywriter Christian Lander’s satirical blog about “the Unique Taste of Millions” blew up and produced not one but two “real” books. None attained anything like Stuff White People Like’s explosive burst-of-the-blog-book-bubble success, but some of them at least cracked a few good ones in the attempt. Even the English-speaking Korean national behind Stuff Koreans Like, a short-lived blog even by these standards, made a few astute observations on his countrymen and their enthusiasm for pictures of food, the Nobel Prize, travel essay books, slapstick, “taking white people too seriously,” Harvard, and the writer Alain de Botton.

“Swiss-born English-language essayist Alain de Botton is the sum of what every Korean essay writer consciously or subconsciously aspires to be,” reads the relevant entry. “Calm and subtle prose, lightly worn erudition, even attended Harvard at one point. Alain de Botton may very well be the Perfect Modern Korean Essayist.” You can see the evidence of de Botton’s large and ever-growing appeal in this country at every major bookstore, from whose shelves dozens of images of his face look sagaciously out from little paper banners wrapped around translated editions of his many books, like Essays in Love (왜 나는 너를 사랑하는가, or “Why I Love You”), The Consolations of Philosophy (젊은 베르테르의 기쁨, or “Young Werther’s Happiness”), and Status Anxiety (불안, or simply “Anxiety”).

Just last weekend, the man himself stopped by Seoul to deliver a lecture at Korea University’s grandest hall, whose attendees snapped photos of themselves beside posters bearing his image for hours beforehand. (Though most bought their tickets early, I found some available at the door — for those who wanted to pay nearly $140 a pair.) Some had registered to attend through Korea University itself, and some through The School of Life Seoul (인생학교 서울), the local branch of the international educational organization co-founded by and closely associated with de Botton (and here run by writer-entrepreneur Mina Sohn), which offers classes on how to be creative, manage stress, relate to your family, travel like a philosopher, and face death.

These topics have, by design, great relevance to most every human being, but it seems they strike an especially resonant chord with Koreans, who by their own admission often feel as if they lead stress-filled lives amid demoralizing buildings (of the kind de Botton diagnosed in The Architecture of Happiness), racked by anxiety about status and much else besides, their relationships complicated by the remains of Confucianism and their minds clouded by the fear that it might all come to nothing in the end. Though as a foreigner I don’t feel quite so afflicted and, perhaps as a result, haven’t attended a School of Life class myself, I do appreciate de Botton’s overall project, which I’ve come to know mostly through his writing and his television documentaries.

I even had the chance to express a bit of that to him directly when I interviewed him on The Marketplace of Ideas, a public radio show I did in Santa Barbara few years ago, about his book The Pleasures and Sorrows of Work. (You can download an MP3 of it here.) Though I’d already started studying the Korean language back then, I had no idea yet of his disproportionate readership in this country, and so it surprised me when, talking to a Korean friend in Los Angeles a few years later, I heard her name The Pleasures and Sorrows of Work as one of her favorite books. Doing some follow-up research afterward, I found she wasn’t an outlier.

Still, I realize that not everyone counts themselves as fans of Alain de Botton, and I’d be remiss if I didn’t acknowledge Lisa Levy’s criticism of his work, The School of Life included, in the LARB‘s own pages. It astonishes me that the first School of Life opened in London, the epicenter of a culture seemingly built upon “taking the piss out of” the kind of earnest and undisguised efforts to raise oneself up that it ostensibly encourages in its clientele. When I interviewed Daniel Tudor, author of Korea: The Impossible Country, here in Seoul, he clearly articulated what he likes better about this country, however impossible it may be, than his native England: “We’ve always been a little bit cynical. We make everything into a joke. It’s socially a crime, almost, to be seen being very ambitious, or trying to be different, trying to do something new. In England, somebody will always laugh at you: ‘Why ya doin’ that? C’mon, mate.’”

But not in Korea, a country that, for one reason or another, doesn’t trade in what we in the West would call irony. According to the author of Stuff Koreans Like,  “Irony is the #1 Stuff Koreans Don’t Like,” since “Koreans tend to be bad at understanding irony and all subsets of irony (sarcasm, hypocrisy in politicians and church ministers, etc.),” hence the enduring success of Friends over here and the sinkage of Seinfeld. “This is also why Korean culture is so successful in the global arena: Korean pop music and telenovelas, neither of which are particularly rich in irony, can be easily translated and globally exported.”

I hesitate to say that Korea has nothing resembling irony, and I hesitate even more to say that Korea doesn’t have irony “yet,” as if irony must ultimately arrive everywhere as just another stage of development into modernity as inevitable as skyscrapers or convenience stores. I also understand the richness a certain degree of irony can bring to a culture’s humor — not for nothing does British comedy still count as a species apart from, and often above, the American variety — and what its forms of expression lose without it, as evidenced by all those bland Korean hit songs and interminable melodramas packaged for export. But when in the West, I find it hard to ignore the feeling that irony — the malignant kind, as a friend once put it, whose opposite isn’t gullibility but sincerity — has made real, possibly irreversible progress in eating us alive. 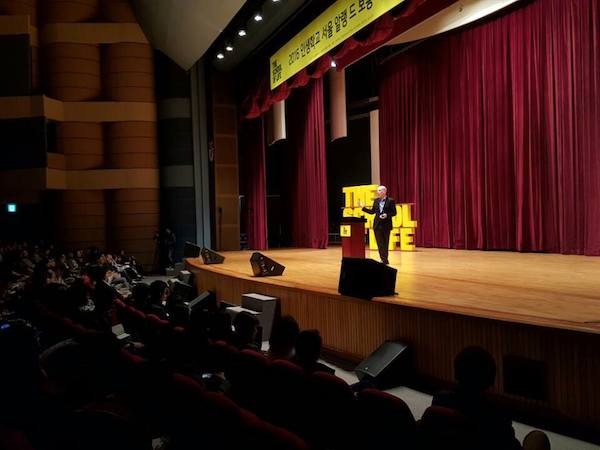 Just as I enjoy Korea for its relative lack of irony compared to other developed countries, I enjoy Alain de Botton for his relative lack of irony compared to other living writers. (Not to say that it results in books stripped of humor; his writing in English tends to possess the kind of dry, descriptive wit that gets occasional out-loud laughs from me at surprising moments, though whether it translates effectively into Korean I can’t say.) And a reduced level of irony allows for a higher level of aspiration, a concept criminalized, inadvertently or deliberately, by ironists everywhere; de Botton’s harshest critics tend specifically to condemn this aspect of his project, which not just allows but encourages him to get people taking classes on how to make up their minds, to use works art and philosophy as tools of therapy, and to write books with titles like How Proust Can Change Your Life.

Mark Greif, looking back in the Chronicle of Higher Education at the lost America of the 1930s through the 50s in which the Partisan Review thrived, writes of that time, place, and publication’s “aspirational estimation of ‘the public.’ Aspiration in this sense isn’t altogether virtuous or noble. Nor is it grasping and commercial, as we use ‘aspirational’ now, mostly about the branding of luxury goods. It’s something like a neutral idea or expectation that you could, or should, be better than you are — and that naturally you want to be better than you are, and will spend some effort to become capable of growing — and that every worthy person does.”

When American friends ask why I wanted to move to Korea, I often give some variation on the answer that people here still regard the future as a good thing. Longtime Korea observers, well aware of the country’s economic slowdown, bitter generational conflict, low birthrate, and increasingly fearful, heavy-handed government might scoff at that notion, but I still sense on the streets of Seoul that idea, or that expectation, that everyone can, or should, be better than they are. This can manifest, of course, in a variety of unappealing ways, from the nouveau-riche Gangnam garishness so popularly lampooned by Psy to the elective cosmetic surgery industry, from cruder forms of Westernization to the tendency to regard everything (especially school and especially Harvard) as just another brand name with which to label oneself.

But maybe when I say people here still regard the future as a good thing, I just mean many still seem to operate on the notion that they themselves could be better in that future, and understand that doing so requires a certain rethinking of the way they live. “Korea is a wonderful country, but in many areas it’s a country in pain,” says de Botton in a School of Life promotional video, expanding on that in a Time Out Seoul Q&A, calling this “a society that has many of the problems (and pleasures) of the modern world where people are extremely busy, life is crowded and expensive, there is never enough time and there is a tension between tradition and the hyper modern, between loyalty to family and to oneself.” Nobody here has yet figured out a perfectly effective solution to the resulting discomforts, but at least they know it isn’t irony. 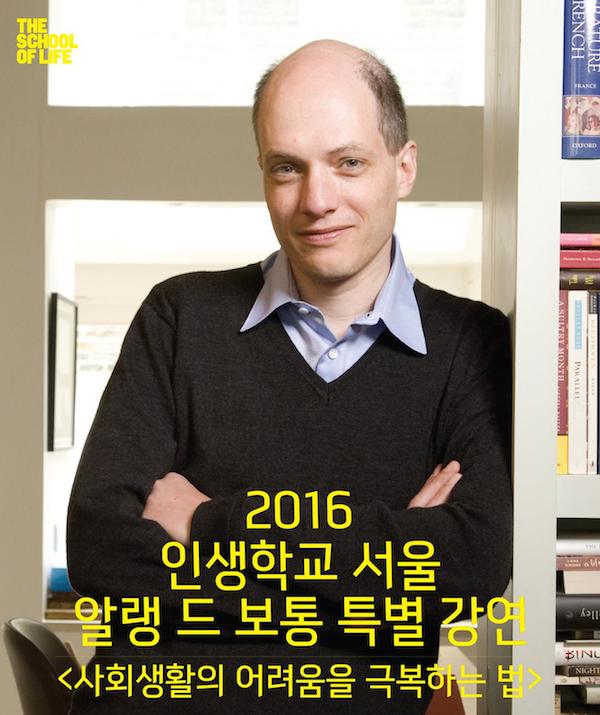