In the past, Korean literature has had a strong tendency towards painful navel-gazing, being more or less defined by the traumas native to Korea at the time. At the turn of the 20th century, authors, naturalistic ones like Kim Tongin as well as more “visionary” ones such as Yi Kwangsu, rallied behind the flag of “modernism.” When Japan invaded and overtook Korea, the literature shifted toward concealed (and sometimes not so concealed) explorations of the effects of colonialism and national powerlessness. With the end of World War II and the brief interregnum of “liberation,” literature turned toward a Korean future, sometimes also exploring the meaning of the colonial and collaborative past. After the split of Korea and its Civil War came almost nothing but pundan munhak, or literature of separation. Similarly, when Park Chung-hee frogmarched Korea into the modern economic era, writers examined the political, social, and economic costs of this great leap forward.

Korean literature’s supremely national nature has been both its strength and weakness. But this began tp change even before the millennial shift. From Choi In-ho’s Deep Blue Night (1984, about Koreans in California) and Kim In-Suk’s The Long Road (1995, set in Australia with primarily Korean characters) to Cho Chongnae’s The Human Jungle (2014, set in China, with a thoroughly international cast) this focus has grown in scope. Into this increasingly international setting of Korean literature, White Pine Press has released Jeon Sungtae’s Wolves, which collects 10 short stories focused on Mongolia and the Korean experience there. Its stories, six of which take place in Mongolia itself, include Koreans, Mongolians, and general “foreigners,” the majority of whom endure precarious careers and self-identities as well as existential struggles.

The first story is “The Magnolia,” named after a Korean restaurant in Ulan Bator apparently modeled on the famous chain of North Korean “Pyongyang” restaurants scattered across East Asia in an effort by that straitened country to earn some hard currency. The “hero” takes Korean businessmen on team-building expeditions, which gives Jeon a chance to explore Mongolia’s shift from communism to neoliberalism, and to cast a sometimes jaundiced eye on how international exposure can affect a newly internationalized country.

The title story is multiply narrated, centered around the hunt for a black wolf. It begins with a Mongolian who recounts some shocking changes in the Mongolian economy, social life, and even his daughter as she grows up. He is exhausted by the Korean tourists who represent his trade, describing how he feels his “slowly falling apart,” and in fact, by his own admission, he ends up losing that soul to the lure of cash. A character called only “The Monk” summarizes Jeon’s take on getting by in a liminal land: “I have realized that the dharma is a compromise…” The Korean “Hunter” in search of the wolf is a remarkably well drawn character as well as a vile one, and as “Wolves” ends, the plot tightens and increasingly short segments ratchet up the tension as the predictably horrible conclusion closes in. (This story, an excellent one to get a sense of what Jeon is about, can be read online at The White Review.)

The other stories are also good. “Southern Plants,” which begins with an arresting vegetative image that might normally be considered the miracle of life, takes on alarming meaning in the context of South Korean anxiety around guest-workers as uncontrollable “foreigners” in Korea combined with a kind of pathos towards the North Koreans who desire that same status. When the restaurant “Mongolia” makes another appearance here, its identity as a North Korean money-making outfit seems confirmed. “The Korean Soldier” combines the otherness and impotence a “foreigner” can feel in another country with the loss a man feels as middle age approaches. Narrator Chang-Dae, living in a kind of nostalgic haze, makes the fateful mistake of stepping out of his apartment without a key. Essentially orphaned by that move, he is forced to reacquire his sense of self in an act of existential bravery that is also life-threatening.

“The Second Waltz” intertwines the stories of a South Korean novelist, a North Korean who has settled down in pastoral Mongolia, and a local woman. The image of the wolf is also re-invoked here to suggest forces are at work beyond logical control. Jeon is very good at interweaving the elements of his stories to create a larger context, and in this case the wolf is in fact a premonitory element. “Chinese Fireworks,” a wonderful study of unintended consequences, finds a Korean pastor inadvertently assuming a key role in the economic life of local homeless children. When, without thinking, he one day changes his actions, the effects of his choice reverberate all the way down the economic food chain. The fireworks of the title seem to represent both a lament and a faint hope.

“River Crossers,” a more traditional tale of a tragic defection, is vaguely reminiscent of the title story of Krys Lee’s Drifting House. “Has Anyone Seen My Shoes?,” a bawdy tale of overdrinking, a kind of bigamy, and two shoes, barely even mentions international issues (apart from one obligatory mention of the North-South split), and looks amusingly on all kinds of very Korean social elements, including a really funny take on a “woeful way to farm” and the Korean media that will particularly resonate with any foreigners who have spent time living in South Korea. The also amusing “Kids Need Money Too” tells of a variety of different kinds of frauds in a small Korean village. “Imitayshun” begins in a similar tone, examining the dance between a mother, principal, and foreign hagwon (or private academy) teacher. What begins in a humorous pas de trois resolves in issues of self-meaning, ethnic identification and, of course, work. An amazing collection of little scenes strung together, the story adds up to much more than its individual parts, and like all of Jeon’s work, reveals an unexpected amount of detail about modern Korean society and culture.

Sora Kim-Russell does her typically excellent translation, and throughout the entire book I only spotted one error, a name that loses its final consonant. In a sentence like, “Their scythes caught on pit vipers, their testicles were bitten by fire ants, and they blundered into beehives,” a reader barely notices how well-chosen are the verbs, and how vernacular and pleasantly flowing the phrasing. The book ends with “Notes on the Text” that I never once felt a need to consult, further evidence of how well the stories and translation carry a reader along. Wolves is intricately and carefully plotted within stories and as the stories overlap and reflect upon one another, Jeon creates very particular characters and events and places them in a mosaic they are incapable of seeing. Readers will enjoy watching the pieces being put in place, and at the end they’ll feel as though they have a far better understanding of Korea and its evolving society, both within its borders and without.

Koreans in Strange Lands: the History- and Culture-Saturated Fiction of Jo Jung-rae

A Rare Korean War Story in How in Heaven’s Name 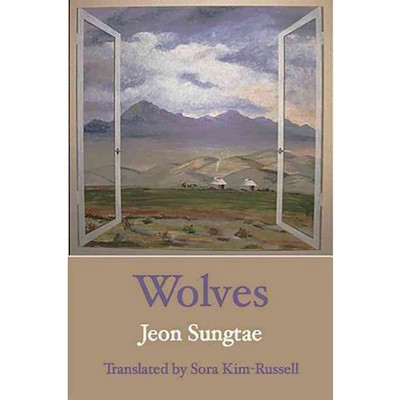