My friend Nick Currie, the musician, artist, and writer best known as Momus, has enjoyed a variety of roles in his career, most recently that of the Japan Times‘s Unreliable Food Critic. While he’s long engaged his own fascination with Japan in the service of his music, he only moved to the country relatively recently, about five years ago. (You can listen to a radio interview I did with him on the subject of going there at the bottom of my collection of podcasts related to Japan.) I met up with him yesterday in Osaka, his home as well as one of my favorite cities in the world — in a league with the likes of Seoul and Los Angeles — for what he calls his “prostitution and destitution” tour, an afternoon stroll through a few neighborhoods that happen to sustain those two conditions.

For all their fascination value, neither of these areas have much in the way of high eating. (Though the signs hanging outside the countless tiny, immaculately presented, and open-fronted brothels of Tobita Shinchi do present the businesses as “restaurants,” and, word on the street has it, will actually order in food from elsewhere should a thoroughly oblivious foreigner wander in hungry.) But that makes them no less fertile ground for the Unreliable Food Critic, a title the food-indifferent Nick crafted for himself that comes with a mission, stated in his debut column, to “explore back alleys where gimlet-eyed men in baggy carpenter pants glance up from enormous bowls, surprised to see a foreigner,” to “shop at garish supermarket chain Tamade,” and to “head to Osaka’s Korean district and rhapsodise about the cheap eats in the market.”

He did just that last in his second column, which found him “in the dark arcades below Osaka’s Tsuruhashi Station” chomping on an ojingeo jeon (오징어 전), “a rubbery crepe filled with spring onions and flattened seafood, and I’m able to bite the pancake from the packet as I wander around this warren of rundown arcades. You couldn’t eat okonomiyaki this way, but here, the center of Japan’s biggest Korean community — almost 120,000 people at the last count — it’s not a problem.” And so, after having passed through the prostitution and destitution, I kept walking, making my own way to Tsuruhashi for a local taste, in as many senses of the word as I could find it, of the country I came from. 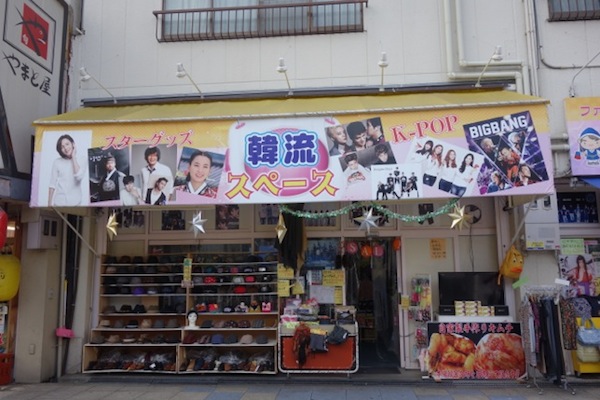 But I hadn’t come straight to Osaka from Seoul; I first spent a weekend in Tokyo, a city so vast and varied that, if you dislike it, you’re probably just doing it wrong. (The same principle holds, maybe even more so, for Los Angeles.) But as soon as I stepped off the bullet train and set foot in Osaka, I knew the second-largest city in Japan would successfully defend its title as my favorite city in Japan. While still very much a Japanese city, it has a slightly ramshackle and famously boisterous nature — powered by what Nick once called a current of “vulgar commercial energy” — and an abundance of still-present artifacts in its aesthetic environment of an earlier Japan, the Japan of the Shōwa period, and especially the Japan of the 1960s, 70s, and 80s.

You can find that sort of thing in Tokyo, but I sense that you have to work a little harder to do it; in Osaka, it surrounds you. One vivid illustration takes the form of two projects by Kisho Kurokawa, a famous architect who designed many of Japan’s iconic buildings of those late Shōwa decades. I first went to see the Nakagin Capsule Tower, an apartment building made of theoretically modular cubical “capsules” owners could “unplug” and replace whole, which has stood in Tokyo since 1972. Alas, this visionary structure has fallen on hard times indeed: a netting now covers it to hold in the parts that periodically fall off, some of the capsules (none ever replaced) brim with junk, others sit long since abandoned, and none of them get hot water. (You can, however, rent one on Airbnb, but not sleep in it.)

Then, when I came to Osaka, I checked into at the Kurokawa-designed Capsule Inn, the progenitor of a type of hotel the world now thinks of as quintessentially Japanese. Though only seven years newer than the Nakagin Capsule Tower, the Capsule Inn Osaka has kept in vastly better shape, surely looking on the whole not much different than it did on opening day. Granted, it’s since developed many a rough edge and absorbed decades of cigarette smoke, but it’s comfortable and very much its own kind of place that operates smoothly in its own way — all things you could say about Osaka itself. 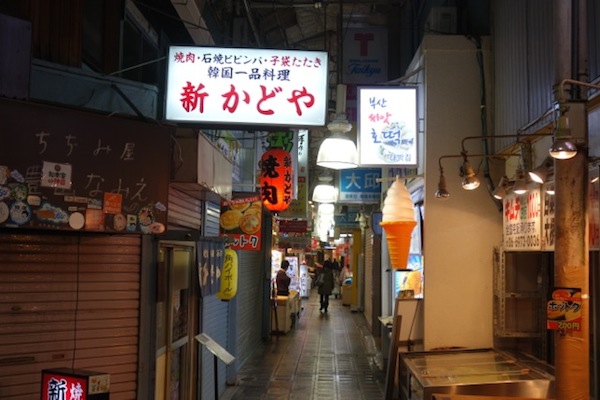 I did, however, sweat it a bit when I first approached the reception desk. Every foreign language-learner will know what I mean when I say that I followed along well enough when the girl working the counter began explaining to me the rules of the hotel, but then my understanding started to lose traction. Still, I kept “hai, hai, hai”-ing through it, grasping less and less as I went, though I did make out that she’d asked me for my address. I told her I live in Korea, and she gasped with surprise — it turned out she was Korean herself, as I learned after we switched, she overwhelmed with excitement and me overwhelmed with relief, to her native language. A graduate of Ewha Womans University (to which I live practically next door), she’d come to Osaka for, in her words, “just an experience.”

Back out on the streets, I heard the voices of a great many more Koreans out having experiences, each one turning my head toward the bracing splash of understanding, a presence that does its part to make Osaka my Japanese city of choice. It certainly did its part to make Los Angeles my American city of choice, something I wrote about not long ago for Boom in a piece about finding the Korea in California and the California in Korea. But I’ve found some Korea in Japan as well, my enjoyment of which I tried to convey to the lady from Busan (long Korea’s port of entry for things Japanese, for better or for worse) from whose close-quartered Tsuruhashi restaurant I ordered some bibimbap. I wanted to explain how I realized that Osaka brings, for me, some enriching measure of the spirit of improvisationally and directness I so appreciate in Korea to Japan, a country that has elevated procedure and indirectness to cultural art forms.

Instead, I just said that I like Osaka because it has a Korean feeling — a 한국 느낌. “The weather is cold,” as Nick wrote as the Unreliable Food Critic, “but not as brutally icy as it is currently on the Korean peninsula. The arcades are cleaner here, but I miss seeing colorfully dressed ajumma women (the universal Korean “aunt” figure with her tightly permed black hair and brashly clashing garment patterns) sitting on newspapers on the ground chopping vegetables, and I miss Korea’s younger population, with its louder vitality. Like the Korean cuisine here, the Zainichi (ethnic Korean residents of Japan) in Osaka seems a touch cleaned up and toned down. But they still spice up Japan.” And they keep me appreciating both countries, whichever one I find myself in. 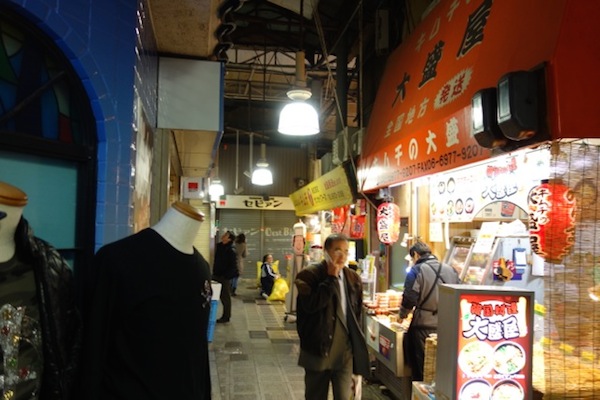