Having described Bigelow’s film as about “police violence — the violence of white police officers against black residents of Detroit,” New Yorker film critic Richard Brody dissents from its widespread acclaim, calling it not just a failure but an atrocity. “It’s clear that Bigelow intended to present a set of historical facts that would offend viewers’ sensibilities, spark righteous outrage at the brutality and the injustice inflicted upon the movie’s main characters, and induce viewers to reflect on the persistence of racist injustice in the United States today,” he writes. But the movie’s presentation of what happened in Detroit, especially a “protracted scene of captivity, terror, torture, and murder in the Algiers Motel,” makes him wonder how Bigelow and her collaborators could have filmed it at all.

“How could a director tell an actor to administer these brutal blows, not just once but repeatedly?” Brody asks. “How could a director instruct another actor to grimace and groan, to collapse under the force of the blows? How could a director even feel the need to make audiences feel the physical pain of the horrific, appalling police actions?” Detroit‘s “meticulous dramatization of events intended to shock,” he writes, “strikes me as the moral equivalent of pornography.” It makes me wonder how he’d judge A Taxi Driver‘s less aggressive but similarly unsparing depiction of the 1980 massacre in the city of Gwangju, whose still-unknown death toll, as against the 12th Street Riot’s 43 (along with more than a thousand injured and near-apocalyptic property damage) ranges from 144 to 2,000.

Both pictures use the framework of documented events, and both fill the gaps in the record with their own fiction as necessary. What Detroit has to invent, it invents mostly within the walls of the Algiers motel where, some time during the night as the riots raged, three black teenagers died and nine men and women, both black and white, took a serious beating at the hands of Detroit and Michigan police officers as well as members of the Michigan Army National Guard. A Taxi Driver gives a personality and a backstory to its titular cabbie, who really did drive German reporter Jürgen Hinzpeter all the way from Seoul to the provincial capital of Gwangju — at the time already all but sealed off by the military — so Hinzpeter could collect footage of the massacre, by government troops trained to kill, of pro-democracy protestors and the citizens who came to their defense going on inside.

The real Hinzpeter died last year, having never managed to relocate the helpful driver who gave the unusual name of “Kim Sa-bok,” and now lies buried, per his request, in Gwangju. He appears in a video clip placed just before A Taxi Driver‘s end credits, expressing his wish to see Kim one last time. Notably, his are the only German words spoken in the movie. Though Thomas Kretschmann, a German actor who crossed over into American film and television in mid-career, delivers one of the most nuanced performances by a Western actor in a Korean move (not that the bar is high), the movie itself presents his embodiment of Hinzpeter as less a German than a generic Korean conception of the Westerner: white, English-speaking, possessed of a bottomless wallet, able to eat spicy food only with difficulty, and, if aided along by sufficiently clever locals, potentially helpful to the Korean cause.

Detroit makes more extensive use of visual material from real life: “In the scenes of rioting, Bigelow blends what appears to be archival documentary footage of the events with her own dramatizations of them,” writes Brody. “Her style of filming action, mainly with a handheld, shaking, and darting camera, is an imitation of the style of the newsreels, as if lending her own stagings and dramatizations a seamless claim of comparable veracity and authenticity.” A Taxi Driver doesn’t make the same kind of attempt to integrate Hinzpeter’s real footage, despite the more solid artistic justification for doing so, perhaps because of the trouble Im Sang-soo’s The President’s Last Bang (그때 그사람들) got in for incorporating about four minutes of documentary footage, mostly of protests, a dozen years ago.

That film dealt with the 1979 assassination of Park Chung-hee, South Korea’s strongman president of nearly sixteen years, an event that cleared the way for the rise of South Korean Army major general Chun Doo-hwan, president of South Korea for most of the 1980s and already effectively ruling the country at the time of the Gwangju massacre. That the Seoul Central Court ordered the documentary footage and only the documentary footage censored out speaks to the difficulty of straightforwardly telling the stories of with recent history in this country, as does the fact that, even after the overturning of the court’s ruling the following year, the film’s production company still had to pay the family of President Park the equivalent of over $100,000 USD for allegedly putting him in a bad light.

Not that recent Korean films have shied away from dealing with history: Yoon Je-kyoon’s 2014 Ode to My Father (국제), the story of one man’s journey from his childhood amid the Korean war to his stretches as a coal miner in Germany and a mercenary in Vietnam to his years raising a family in his unrecognizably modernized homeland, became the second highest-grossing film in Korean cinema history by doing little else. The previous year, The Attorney (변호인) presented a cling wrap-thinly veiled fictionalization of a few chapters in the life of Roh Moo-hyun, a provincial tax lawyer who came to the defense of 22 people falsely charged as North Korea sympathizers by the Chun Doo-hwan regime in 1981 and in 2003 became the president of South Korea (just as his onetime associate Moon Jae-in did this past May). 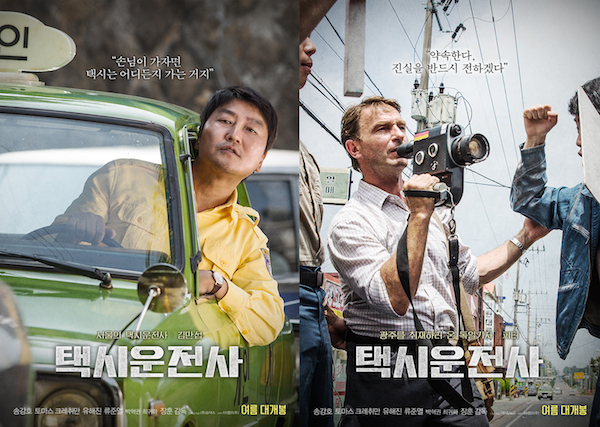 Cast in the Roh role was Song Kang-ho, one of Korea’s best-loved movie stars and a specialist in playing nicer versions of the kind of blustery middle-aged men found at every level of Korean political and economic life. He also portrays A Taxi Driver‘s “Kim Sa-bok,” a character that, despite his goofy patter and freewheeling ways, has more in common with the dignified protagonist of The Attorney than not: both are unpretentious, workaday professionals looking out for nobody but themselves and their families until events place them at a moral crossroads. Just as it dawns on not-exactly-Roh that he has to stand up to the expedient lies of the dictatorship, so it dawns on Kim the taxi driver that he has a responsibility to Hinzpeter (in that he shouldn’t pocket his fare and leave him to fend for himself on the increasingly bloody, tear gas-choked streets of Gwangju) as well as to ensure that the world — and especially the West — sees what his country has done to itself.

Or at least a Western viewer, watching A Taxi Driver‘s harrowing recreation of the slaughter in Gwangju, will see it as a country doing something to itself. Absent the racial animosity Detroit tries to indict, fueled by the primal fear people of one origin can feel in close geographical and historical proximity with people of another, the sight a country’s military men cold-bloodedly gunning down other citizens of that same country, even those waving white flags, can strike an American as inexplicable — especially if they consider how little separates those soldiers, men in their twenties clad in uniforms and riot gear similar to that seen on the equally fresh-faced conscripts still deployed to contain protests today, from so many, especially the students, they killed. (But then, Korean-on-Korean violence didn’t begin in 1980; the period between the departure of the Japanese colonizers and the Korean war, for instance, turned especially bloody, as any non-Korean scholar of Korean history might tell you.)

What were those soldiers thinking? Alas, the film shows almost no interest in that question, to the point that it presents them almost as storm troopers, hiding behind gas masks the expressions on the faces of all those who do harm to their fellow Koreans. Surely some of them didn’t want to be there; surely some of them hesitated before pulling the trigger. By the same token, a fair few no doubt wholly accepted the then-official line that they’d been sent to protect the citizens of Gwangju who knew well enough to stay in their homes from the rioting, presumably armed Communist sympathizers (and Communist-sympathetic or not, some did return military fire with their own weapons) running rampant on the streets. Defenders of the government’s actions argue, not without some plausibility, that North Korea had already sent agents to Gwangju to stir up trouble. And what on Earth, if Northerners were indeed present, were they thinking?

Both A Taxi Driver and The Attorney incarnate the cynical malevolence of the deep South Korean state in an individual, thuggish — and made-up — official written into the script expressly to be defeated, while the massacre-ordering Chun himself, sentenced to death in 1997 but pardoned soon thereafter by then-president-elect and democracy-movement figurehead Kim Dae-jung (whom Chun had previously sentenced to death as an instigator of the rebellion in Gwangju), lives out his long life in a stately, police-proteced home in a quiet part of Seoul. Revenge fantasies remain limited such fiction as Cho Geun-hyun’s 26 Years (26년), a film based on a popular comic series about a group of vigilantes who plot to assassinate an unnamed figure even more obviously President Chun than The Attorney is President Roh.

Brody chastises Bigelow and her collaborators for loading Detroit with self-flagellatingly frank, near-fetishistic scenes of brutality instead of pursuing an understanding of the factors that gave rise to the 1967 riots they purport to depict. For all its satisfactions as entertainment, A Taxi Driver similarly fails even to try to investigate the causes of the events at its center, a condition strangely common in Korean cinema, where features and documentaries both tend to focus on specific acts of heroism and sacrifice (which many Gwangju cabbies, now known as the “drivers of democracy,” really did perform) rather than explanations of, or even guesses about, what necessitates those acts. Ode to My Father ends with the elderly protagonist it has followed through Korean history demanding his father’s ghost tell him why his life has been so hard; Robot Sound has a plot built on the real 2003 Daegu subway fire yet seems unconcerned with why such a tragedy — set off, incidentally, by a disgruntled taxi driver — could happen in the first place.

A Taxi Driver and Detroit have proven compelling to critics and viewers alike not because of the astuteness with which they probe their respective man-made catastrophes, but in large part because of their adherence to myths. One American myth, repeatedly strengthened by the events of recent years, holds that racial hatred has poisoned the country so deeply and permanently that the efforts of the past half-century to resolve it — and probably those of the next half-century — can only come to naught. One Korean myth, strengthened by millennia of power abuse and a disaster-prone sixty years of development, holds that the country, especially at its lower social levels, is simply destined to suffer, unpredictably and unjustly. These myths aren’t necessarily untrue, nor are they necessarily true, but by their very nature, they feel explanatory enough to put truth beside the point.

Okja, the Groundbreaking Netflix-Produced Movie About a Girl and Her Pig, Shows What Translated and What Doesn’t

Factory Complex: How (But Not Why) Working Women Have It So Bad in Korea 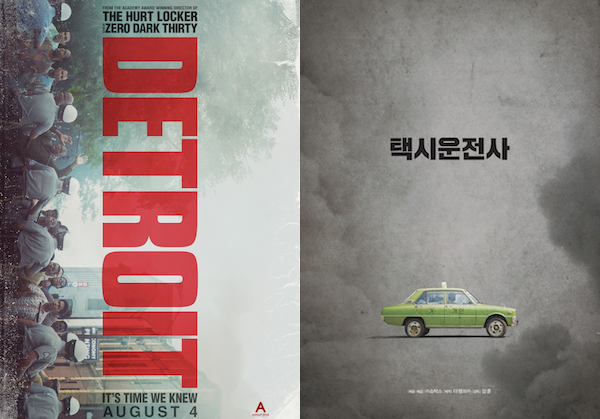