Since the election of Donald Trump last Tuesday, protesters across the United States, thousands of them in downtown Los Angeles alone, have taken to the streets to make their displeasure heard. Coincidentally, anti-presidential protests have also erupted in South Korea own over the past few weeks, culminating in the unrelieved crush of humanity, comprising 500,000 to one million demonstrators — an astonishing number, even in a country with a rich tradition of protest — that filled downtown Seoul on Saturday night. They came not to object to an undesireable president-elect, but to demand the resignation of Park Geun-hye, the president of more than three years who stands accused of having handed the reins of power to an unelected and previously obscure confidante, herself the daughter of a religious cult leader.

In a widely circulated breakdown of the scandal, a blogger known as The Korean lists the accusations against Park and her confidante Choi Soon-sil, who, under Park’s watch, has been “running a massive slush fund, as she extorted more than $70 million from Korea’s largest corporations,” who routinely received “confidential policy briefings and draft presidential speeches — all on a totally unencrypted computer,” and who “rigged the college admission process so that her daughter, not known to be sharpest tool in the shed, would be admitted into the prestigious Ewha Womans University.” That last struck an especially sensitive nerve in this society, which has always turned a blind eye at embezzlement at all levels and especially in politics, but which can’t stand anything that throws the prized “fairness” of its higher-education system into question.

“Having survived a particularly tumultuous modern democratic history, Korean people may be the world’s most cynical consumers of politics,” writes The Korean. “But this. Even the most cynical Koreans were not ready for this. At first, there was a tiny bit of perverse relief, as all the bizarre actions of Park Geun-hye administration suddenly began to make sense. Why did the president only hold just three press conferences in the first four years of her administration? Why does the president always speak in convoluted sentences that make no sense? Why did the president fly off the handle and sue the Japanese journalist who claimed that she was with Choi Soon-sil’s husband while the ferry Sewol was sinking in 2014, drowning 300 school children? Why did the ruling party randomly host a shamanistic ritual in the halls of the National Assembly? Ohhhh, the relief went. Now it all makes sense.”

And yet “this brief relief soon gave way to the terrifying realization: actually, it does not make sense. None of this makes any sense.” It looks as if President Park, who at time goes by has looked more and more like the victim in this sordid story, has engaged not in the usual self-interested corruption, but a kind of “self-sacrificing in favor of Choi Soon-sil.” And instead of acting like a “normal” politician who would “sell the crony down the river, denying up and down that he ever knew or interacted with the crony,” Park stood in front of the whole country and admitted that Choi Soon-sil fixed her speeches. Instead of cutting ties with her, Park reaffirmed that Choi was an old friend who helped her during difficult times.”

Since all this came to light last month, Koreans’ questions of how it could possibly have happened have only intensified, just as will Americans’ questions — or at least some 60,839,922 Americans’ questions — about how the likes of Donald Trump could possibly have come to power. In the case of Trump, though, we more or less already know how it happened: the left-leaning part of the country, which includes most of the major media, got blindsided by the sheer power of a message sent to the part that less leans to the right than it yearns to see an insecure, corrupt, “soft” America torn up and started over again. Yet the signs of a coming Trump victory, though it seems to have taken even Trump himself by surprise, were there for anyone to see, just as anyone could have long sensed something amiss indeed with Madame President.

Park Geun-hye — and I have Korean friends who would hesitate to write this sentence, even in a personal text message, for fear of reprisal — has always struck me a strange lady. I have to admit to a certain relief that all the difficulty I endured trying to make sense of the often apparently meaningless circumlocutions in her speeches came not from my insufficient mastery of the Korean language (or not only from that), but from the sloppy hand of Choi Soon-sil. Whether the puppetmaster’s doing or not, Park’s bizarre behavior clearly didn’t stop her from rising to the most powerful position in the land, and in retrospect the appeal that temporarily bleached out all those troubling oddities looks quite Trumpian. 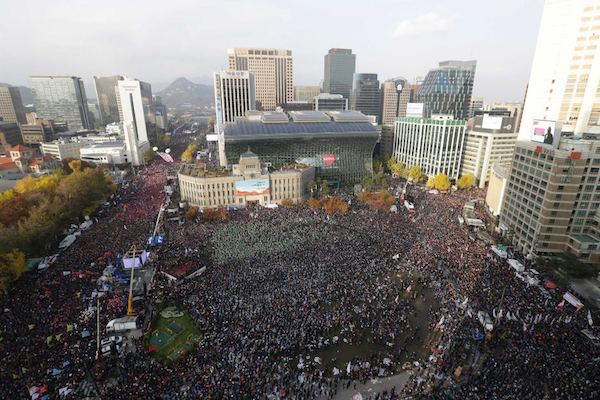 From across the Pacific Ocean, the triumph of The Donald looked to me if not inevitable, then at least highly probable. For all its bluntness and disorganization, his campaign had by far a greater resonance with its enthusiastic target audience that Clinton’s had with its own comparatively ambivalent one. Take, to name just one element, the slogan “Make America Great Again,” a brilliantly simple encapsulation of the longing it turns out that no small part of the country feels for a period of postwar economic growth and perceived class mobility — or, if you prefer, of being the only non-impoverished nation on Earth — that has now taken on a quasi-mythic quality. The closest thing Clinton had to a phrase of such memetic power was that remark about the “basket of deplorables,” which galvanized the large portion of Trump’s base that took it as a direct personal attack.

Park, daughter of the developmentalist strongman Park Chung-hee who ran South Korea for eighteen years and oversaw the country’s transformation from one of the world’s poorest into an unprecedented economic success story, might as well have run on the slogan “Make South Korea Great Again.” Though Park Chung-hee’s South Korea of the 1960s and 70s was, by all accounts, a harsh and unforgiving place to live, the generation who came of age at that time knew the exhilaration of taking part in a rapidly growing economy. Many in that generation generation voted for Park Geun-hye, of whom I’ve never met a fan under the age of fifty, remembering the national pride they felt because of the actions of her father, described not long ago by the mayor of his birthplace, the small town of Gumi, as “half god and half man.”

Gumi stands far from Seoul, out in the southeastern Gyeongsang provinces that also produced Park Geun-hye and four of the presidents between them. Only one emerged from the southwestern Jeolla provinces, locked since antiquity in a rivalry with Gyeongsang: Kim Dae-jung, who served from 1998 to 2003 and has passed into world history as a freedom fighter and one of the main agents of Korean democracy. Kim also spearheaded the engagement-based Sunshine Policy toward North Korea, which won him the Nobel Peace Prize in 2000 but which came to a swift end under President Lee Myung-bak seven years later. The story showcases much of the distinctive nature of politics in South Korea, a land where regional animosity substitutes for ideology, where politicians have little to differentiate their platforms but their stance toward the North, and where the top of every newly elected official’s to-do list consists simply of undoing the work of their predecessor.

Korean politics tends to strike Americans as alien even before they find out the juicier details. Some candidates, for instance, send their wives to fortune-tellers (a robust industry here, most visible in the form of their illuminated sidewalk stands) in order to determine which party they should join — that is to say, in order to find out which party will most likely win, evidencing an askew kind of pragmatism that looks a lot like what that the longtime Democrat Trump displayed when he turned Republican and stormed the weak field of that party’s primaries. The 2016 United States presidential election looks even more Korean in light of the voting results and their starker-than-ever divide between America’s blue edges and red center, let alone the stories of blinkered elites on the globalized coasts and desperate communities marooned in the post-industrial heartland spun out of them.

“It seems as though the whole of the developed world is suffering a kind of paroxysm of governance,” wrote an American friend, resident in Canada since the George W. Bush years, after Park got in trouble but before Trump got elected. “And unlike 1968, I don’t see any mass action or silver lining of ideological optimism. This is merely disgust and resignation to incompetence. I realize democracy in South Korea runs shallow, but a fragile political order with tenuous trust in leaders seems to be more widespread.” Both South Korea and the U.S. have just now plunged into especially deep periods of disgust and distrust, but they and other countries have also, over a longer period of time, struggled and for the most part failed to come to terms with the end of large-scale economic growth and the realization that all but the most drastic actions of national governments have less effect on their citizens than do the daily flows of global capital.

When people ask why I left America, I sometimes reply that I wanted to live in the First World. Until now, most of the people asking probably assumed I was joking, wrongly: in my lifetime, the United States of America has exhibited most of the characteristics I associate with the Third, from decrepit infrastructure to ethnic strife to a debilitating fear of violent crime to tightening informal restrictions on permissible speech and attitudes to a tendency to look to savior politicians. Though I didn’t choose to lob the long-range grenade of an absentee ballot for Trump at the system, I understand why a non-trivial percentage of my frustrated countrymen wanted to. South Korea, its ascent into the ranks of developed nations still more or less fresh in living memory, will surely survive the removal of its first female president; America, despite its increasing commonalities with the developing ones, will surely survive the administration of the man who defeated its would-be first female president. Still, I have to admit that I feel relieved to be watching the situation in the latter from the distance of the former. 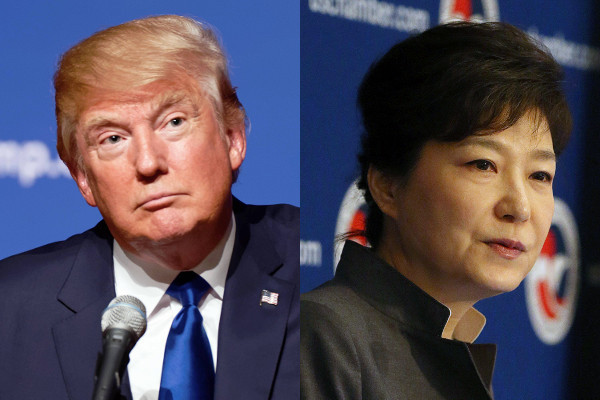