“Even better if you see it as a family,” exclaimed the ads for a movie that opened a couple weeks ago here in Seoul and has now made it to Los Angeles. The posters showed a middle-aged man hanging out with a diminutive, somewhat R2-D2-like robot and the title Robot, Seori (로봇, 소리). The film bears the official English title of SORI: Voice from the Heart, but I prefer the simpler, more literal translation I’ve seen used here and there: Robot Sound. In some respect it reflects the content more clearly, given that the story concerns a robot fallen to Earth, and specifically to the South Korean coastline, originally designed by the U.S. National Security Agency as a component of a satellite that records the sound content of and, using its formidable artificial intelligence, recognizes the voices in all phone calls made across the globe.

The robot lands at the feet of Hae-kwan, the fellow on the poster, a disheveled late-fortysomething nearly a decade into an increasingly hopeless search for his missing daughter Yoo-joo. “This is crazy talk,” he says in the words that also constitute the picture’s tagline, “but I think this guy knows how to find my daughter.” But the robot turns out not to be a guy, or at least Hae-kwan decides it mustn’t be one after rolling it into a clothes store (having borrowed his wheelchair-bound techie friend’s spare conveyance to cart his discovery around) in order to buy it some kind of disguise. He suggests a black hooded sweatshirt, but Sori (for the robot has by now taken as a name the Korean word for sound) wheels over to a pink one instead, which sets up, for me, the biggest laugh line of the movie: “You’re a woman?” shouts the flabbergasted Hae-kwan. “Yes?” responds the suddenly nervous girl minding the shop.

SORI has its moments of comedy, at other times plays like a geopolitical techno-thriller, and at other times still goes, as so many Korean movies do, for the melodrama. The tone, as well as the human-robot buddy pairing, remind me of Short Circuit, that tale of a gentle animal-handler and an experimental treaded military drone brought to wisecracking life by the strike of a lightning bolt. John Badham, the director of that film as well as others like Blue Thunder, War Games, Stakeout, and Bird on a Wire, lays fair claim to the title of one of the masters of 1980s Hollywood, whose sensibility mainstream Korean entertainment has recently rediscovered and begun reinterpreting. A broad but energetic buddy-cop picture called Veteran (베테랑) last year became the third highest-grosser in Korean cinema history, and at a Q&A after a screening I asked its director Ryoo Seung-wan what other police movies he likes; he cited Beverly Hills Cop and 48 HRS. as his direct inspirations.

Korea has also seen a string of popular film and television period pieces set in the 1980s, a time when Korean society (to use a phrase beloved of the textbooks here) came back into bloom. The controls of the dictatorship began to loosen (albeit with bitterly remembered and often violent clampings-down along the way), and waves of protests loosened them further still, to the point of forcing the introduction of democracy. The period infused works of art, no matter how popularly intended, with a reinvigorated spirit of societal criticism, another of the qualities I’ve come to expect in mainstream Korean films where I wouldn’t necessarily expect it — or at least would expect a more toothless variety of it — out of Hollywood. 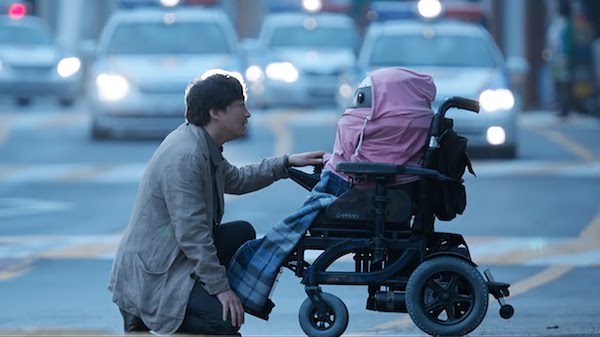 The story of SORI takes place for the most part in the recent past, the year 2013, and in the somewhat far-flung city of Daegu, a former pillar of industry situated in a valley almost 150 miles from the capital that remains known primarily for its American military bases and stifling summer heat. (I’ve heard some positive things about the place too. I once asked a well-known Korean writer if it wasn’t true that Daegu has the most delicious apples in Korea. “They were,” he responded. What about the widely held notion that Daegu has the most beautiful women in Korea? “They were.”) In any case, it hasn’t enjoyed much screen time before, so even if the prospect of a man befriending a stray robot didn’t appeal to me, seeing the rare Daegu movie would.

So what happened to Yoo-joo? Structurally, most of the movie plays like a detective story, with Sori using her accumulated information drawn from all that omniscient phone recording to lead Hae-kwan from person to person from her past, getting a scrap of information from each. Yoo-joo, we learn, had musical aspirations: at one point Hae-kwan comes across her guitar, and from one of his interrogatees he takes her sole extant demo CD. The daughter couldn’t have chosen a lifestyle more at odds with that of her father, presented in flashbacks before her disappearance — in other words, before the rigors of the search make him relinquish control over his appearance and behavior — as a representative of the faceless company men of his generation, cut as clean as possible, dressed as soberly as possible, and brimming with frustration and rage, every inch the stern, bland, middle-aged ajeossi (아저씨) figure of popular culture.

Sori waits until the very end of act three, cornered by authorities both Korean and American high above the dockyards, to reveal the whole truth to Hae-kwan in the form of a tearful voice message left by Yoo-joo on his old cellphone just before she perished in the subway fire of February 2003. That might sound like a spoiler, but every Korean watching this movie will have known it from the beginning, far sooner than Hae-kwan himself does — or at least, far sooner than he finally accepts the obvious. A Korean movie having a character disappear in Daegu in 2003 is like an American movie having a character disappear in Oklahoma City in 1995: sure, she could have vanished off to anywhere, but given the time and place, you have a pretty fair idea of what happened. 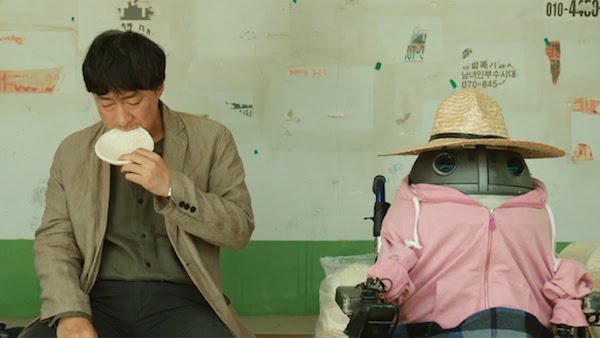 The Daegu subway fire killed 192 people, two of whom remain unidentified, and it now appears in the litany of nationally embarrassing disasters, badly exacerbated by incompetence and irresponsibility (the driver of the flaming subway train, for example, ran and locked all the doors behind him), often recited to illustrate the problematic nature of South Korea’s rapid development. It happened eight years after the even deadlier collapse of the Sampoong Department Store in Gangnam, which gave a basis to Kim Dae-seung’s romantic tragedy Traces of Love (가을로), and eleven years before the sinking of the M.V. Sewol, the subject of two documentary films so far which still awaits its own feature adaptation. As a friend very familiar with the Korean film world said when the subject of who might direct the inevitable Sewol movie arose, “I just hope it won’t be Kang Je-gyu,” a filmmaker famous for his high-profile, big-budget, simple and unchallenging crowd-pleasers.

Ho-jae lee, the director of SORI, has made a mainstream movie indeed, though not, to my mind, an oversimplified one. But viewers unfamiliar with the sensibilities of Korean cinema may find its indictment of Korean society, which deals with the poisoned relationship between the generations, rather stark. Hae-kwan’s cohort came of age at a time when South Korea, still in many respects a developing country, could for a little while longer credibly hold out the promise of relative prosperity in exchange for untroublesome compliance with the national program. Yoo-joo’s peers find themselves in a different reality altogether, one with far fewer guaranteed returns on hard-working and conformity — a conformity that, so one narrative has it, got in the way of the older generations creating a country where the younger ones could prosper.

SORI doesn’t come as the first movie in circumstances force a prosperous, set-in-his-ways ajeossi (Hae-kwan has a cellphone in 1990, which even in America would have set him apart as a hot-shot) to the realization that his children’s generation doesn’t live in the same world he does. In 2013, Yang Woo-suk’s The Attorney (변호인) found great success telling the ostensibly fictional story of a Busan tax lawyer in the early 1980s who sees enough light to defend a student against trumped-up charges of sympathy with the communist North. But anyone could clearly see, through that flimsy veil, an early chapter in the life of Roh Moo-hyun, who would go on to serve as one of the few South Korean presidents of whom anyone under age forty still approves.

Big Korean movies don’t generally mystify their allegories. SORI, though, despite all its ajeossi-robot banter, clouds of technobabble, and typically goofy acting by whatever “American” actors the production could turn up (one of whom plays a character called Major Mike), strikes more directly than most. The last view Hae-kwan gets of Yoo-joo, he sees out the window of his car, having just thrown her out of it after what might have been an argument between any number of millions of conflict-prone fathers and daughters in Korea, the former seeing the latter as reckless and impudent, the latter seeing the former as rigid and unwilling to understand anyone but themselves. Hae-kwan demands that Yoo-joo get out at the entrance of the Jungangno station, where, moments later, a disabled and unemployed cab driver (a fellow ajeossi, although one who saw the system as having failed him) would set catastrophic fire to a subway train — and thus one generation literally casts another into the flames. 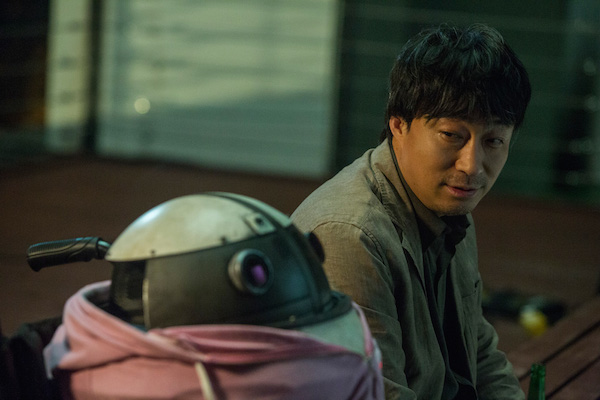