The Grieving Parents monument, which stands at a war cemetery near Vladslo in Belgium, is a memorial for the grief-stricken parents of the war dead. The statues of mother and father stand at the foot of a small stone path that runs along the grass by a line of tombstones. The woman, in the likeness of the artist, kneels on a stone pediment. Her head bows forward as if rocking in grief and pain; a sheet is wrapped about her body, interwoven by arms and hands that hold the blanket in place. Käthe Kollwitz, as both artist and mother, designed the statue in the 1930s for her son, who had died in the trenches during the First World War. In shifting the subject from soldier to parent, the sculpture displaces the dead with the living.

I thought of The Grieving Parents on a visit to the 9/11 Memorial in New York. Visitors took selfies and photographs with iPhones, images that most likely will be shared with friends online. A group of three young women placed their arms around each other as one held a selfie stick aloft in the air. A masked tourist took a selfie a few feet away. The backdrop was the reflecting pool, the stone indent flowing with water where the towers collapsed. Rather than the names of the dead on the bronze placards, the visitors focused on the photographic act: finding the right angle or lighting or filter to portray themselves or the space.

Today, we often interact with the most solemn of sites through the camera lens. To visit is to photograph — to craft tiny, self-indulgent spectacles that, like The Grieving Parents, shift the subject from the dead to the living. In place of actual mourning, remembrance, or even intervention, we photograph. We indulge the selfish desire to document ourselves and our visit, perhaps even to witness, producing an endless, monotonous barrage of images.

Under the “911memorial” hashtag on Instagram, there is a litany of like photographs: closeups of the flowers and flags neatly arranged in the names carved in bronze, One World Trade Center rising in the distance, and the Oculus Transportation Hub’s white eastern facade viewed from across the street. These photographs, both banal and alike, are captioned with generic hashtags and geo-markers. They portray slabs of stone or flowers decontextualized and untethered from symbolic import.

As Teju Cole writes in “Take a Photo Here,” “People don’t merely go to the same places or take photographs of the same monuments and sites; they take photographs of the same monuments and sites in the same way.” He continues, “The same gestures and vantage points and compositions are repeated, and the images come out so uncannily similar that it’s as though everyone were subject to the same set of instructions.” These instructions are encoded in a space — as both attributes of the design and organic, unintended quirks.

At aesthetic postmodernist memorials like the 9/11 Memorial, which portrays loss and death through abstract blocks of stone and metal, we are guided along by clean structures and forms. We walk by the bronze placards and read the names of the lost; we see the indents in the ground, traces of the tower, and the tridents, relics of the faintly visible from near the memorial through a wall of glass. It feels as though we are witnessing the material remnants of the tragedy — and so we make a photograph.

But we are feigning witness. 9/11 was a media spectacle perpetrated during the height of television news, and on the precipice of the internet age; the purpose was to incite fear, which has been replayed through video and photo. “We can’t relearn it; we can only relive it,” writes Adam Gopnik. “The Falling Man,” the most enduring image of individuals who jumped or fell from the towers, has become the object of endless obsession. “Who is this man?” we ask. It is an enthrallment born from our own fear, a want to identify, a need to unearth the unknowns that surround the names and lives of those in the pictures of the tragedy turned spectacle.

Twenty years later, the imagery of that day — the frames of normal individuals in distress, like “The Falling Man” or “The Dust Lady” — is still played on repeat, bored into our consciousness. Any attempt to visually document the memorial, to capture something different or new, is futile. The endless cascade of photographs that document the memorial’s clean stone structures, interwoven by symbols of patriotism and grief, records nothing more than our own enduring fascination. The images trivialize and transform the memorial and the tragedy, from shrine to tourist obsession. The postmodern architecture of the space, interwoven into the urban fabric of downtown Manhattan, means that without awareness, one walks through the space as if it is no different from Times Square or Central Park.

The artist Shahak Shapira crafted the shrewdest critique of photographing at aesthetic memorials. For YOLOCAUST, which Jason Francisco writes on in this publication, Shapira alters lighthearted selfies and portraits taken at the Memorial to the Murdered Jews of Europe, the expansive stretch of gray, stone monoliths in the center of Berlin. The site is devoid of pictorial representation of the horrors — “a metaphoric blank,” writes Francisco. And so, visitors act as if they are among an interactive urban art installation: They take selfies and climb upon the structures for photographs.

In YOLOCAUST, Shapira switches out the background of these images, recontextualizing the people before black and white photographs from the concentration camps: a person in a fedora and sunglasses now smiles before a stack of bodies; a person no longer juggles at amid the stone structures, but in a dirt pit, also with bodies. In these collages, the connection of the people’s banal photographs to the Holocaust, which was implicit but not explicit in the Memorial to the Murdered Jews of Europe, cannot be ignored.

But what happens when we photograph as a tourist at sites that retain the structures and material remnants from when the tragic acts were perpetrated? Here I think of such places as the Tuol Sleng Genocide Museum, a Cambodian prison formerly run by the Khmer Rouge that is now a museum, or the Nazi concentration camps scattered across Europe, which are readymade museums, spatial archives of the Holocaust.

A smiling selfie at Auschwitz does not witness, but demeans. This is an immutable fact that cannot be altered. Yet when the lens is turned on barbed wire fences or bunk beds or holes in the ground that passed as toilets, something else happens: the photograph is a haphazard and amateur record. And, with the continued denial of the Holocaust, even a poorly crafted iPhone photograph of the stone foundation of the gas chambers is a tiny piece of visual testimony — and to take the image is a small act of witness.

If the democratization of photography has meant a trivialization of spaces that memorialize the past, it has also extended the ability for the ordinary bystander, armed with only a cell phone, to craft a record the present. Take Darnella Frazier’s recording the tragic death of George Floyd. It was the brutal and horrific video of Derek Chauvin holding his knee upon Floyd’s neck that helped lead to an American reckoning with race and police brutality. Columbia University later awarded Frazier a Pulitzer Prize, noting, “the crucial role of citizens in journalists’ quest for truth and justice.” Freed from any desire to record her presence in the space’s, Frazier’s filming was an act of witness.

Social media is the archive of our time. It is where we record and organize the present. The feed on Facebook or Instagram is a memorial where we remember, not through stone or bronze, but through photographs and text. The atomized individual of the crowd is given a means to not only witness but also to archive; moments that would have otherwise been lost to the annals of history are brought to the fore.

Top Image: “New York City” by tinto is licensed under CC BY 2.0. 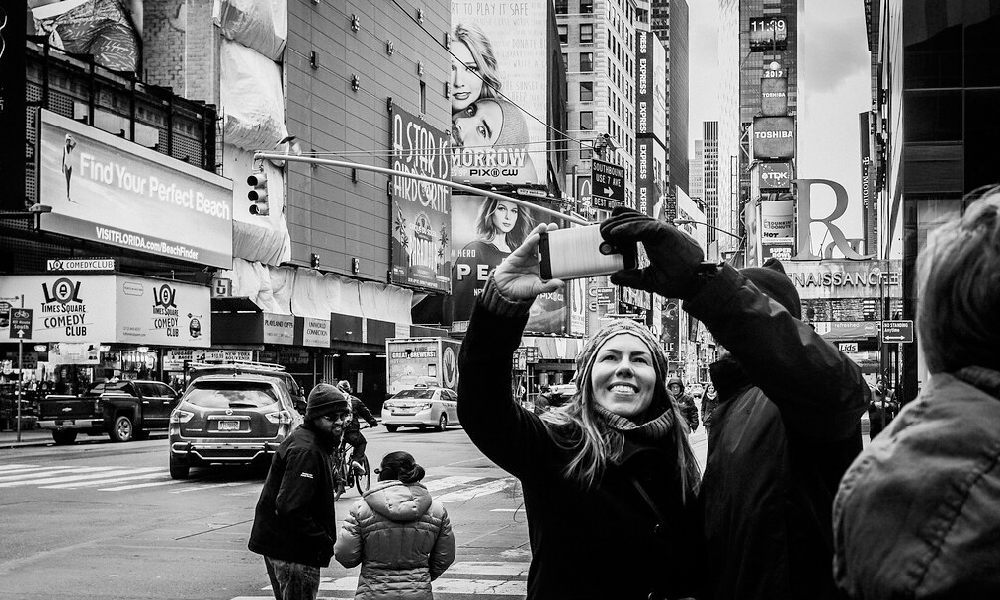