This is the sixth in a series of episode-by-episode reflections on Orphan Black season 5 (preview; episode 1 ; episode 2; episode 3; episode 4; episode 5). These pieces do not provide thorough plot summaries but do include spoilers; they assume readers have already been viewers. Responses via Twitter continue to be very welcome!

With the current pace of advances in the use of gene editing technology, IVF and germ stem cell research, to what extent do you think germline engineering is inevitable?

Two years ago, the journal Nature Biotechnology featured a group interview entitled, “CRISPR germline engineering—the community speaks.” Selecting responses from a diverse panel of leading geneticists and bioethicists, the article led with the question above. Given the recent explosion in gene editing capacity, are modifications that reshape future generations of human beings inevitable?

This question will not hook all Clone Club members, and that’s okay. There is a great deal to enjoy about Orphan Black whether or not one is fascinated with biotechnology or bioethics. (Like, totally, you know, Kay-Bee Natural Beauty. And, um, seriously: martial arts.) But my response this week focuses on a word that deserves special care: inevitability.

This is not the first time Orphan Black has dramatized this rhetoric. Rewind to season two’s finale: at its conclusion, Sarah visits Marian Bowles, the Topside executive who works in the shadows of the Dyad Institute. Before introducing Sarah to one of the Castor clones, Marian explains that her business is “securing monopolies on a future that embraces genetic engineering, synthetic biology, a future I passionately believe is inevitable.” This is the same curious term that the Nature Biotechnology interview investigates. For Marian, we must act — urgently — to enable a future that is coming no matter how we act. Since genetic engineering of future generations is inevitable, why wait?

I want to be crystal clear that there is and will be much that is wonderful about genetic science and its medical applications. At the same time, with all of its outrageous humor, Orphan Black is right to expose how cultural assumptions can contaminate new scientific applications. If we are complacent about how race, class, gender, sexual preference, and/or religion have shaped the history of social injustice, chances are high that emerging biotech wizardry will add to our problems.

In “Manacled Slim Wrists,” Exhibit A is the conversation between Cosima and Virginia Coady. Freed of her chemical restraints, Coady arrives to torment her jailer, Susan Duncan, then descends into Westmoreland’s basement in the vain hope of recruiting an assistant. We should appreciate here that Coady is not just superficially cruel. She has justified her participation in merciless forms of human experimentation via the perverse logic of inevitability. Because she buys into the idea that resistance is futile, she finds Cosima’s resolve genuinely baffling: “I don’t get it. You’re a family. Kira’s mutation, Helena’s fetal stem cells? They will be exploited. If you shifted your thinking one step, you could be part of it.”

Coady cannot imagine the possibility that Neolution’s momentum might be halted, and this allows her to rationalize unfathomable abuses. Unfortunately, she is far from alone in adopting this fatalistic logic. In fact, four of the seven leaders featured in the Nature Biotechnology article affirm that human germline modification is “probably inevitable” (in one case) or just “inevitable” (in the others). This is not to say they would excuse Coady’s behavior, but it’s worth asking what we gain through this rhetoric. Take Craig Venter’s response:

I think that human germline engineering is inevitable, and there will be basically no effective way to regulate or control the use of gene editing technology in human reproduction. Our species will stop at nothing to try to improve positive perceived traits and to eliminate disease risk or to remove perceived negative traits from the future offspring, particularly by those with the means or access to editing and reproductive technology. The question is when, not if.

Venter may very well prove correct. In fact, if faced with a simple yes-no betting line in Vegas, my cynical side would probably win out. However, is there not a significant difference between admitting the likelihood of a potential event and preemptively accepting it? Margaret Atwood once crystalized this for me during a book tour response to a young questioner about whether, given the threats to the future of humanity, she had any hope. I made her pragmatic answer one of my forthcoming book’s epigraphs: “The interesting thing about hope is that if you don’t have any hope then there’s less hope. It is a self-generating thing. So if you do have it, there’s likely to be more.” If extraordinary scientists like Venter assume not only that a given biotech application is written in the stars, but also that the rich will be able to take greater advantage of it, could this also prove a self-fulfilling prophecy?

My instinct is that whatever blessings, curses, and blessing-curses lie in our biotechnological future, we cannot afford to treat them as predetermined. Seemingly alone among her peers in the Nature Biotechnology interview, Dutch bioethicist Annelien Bredenoord recognized this danger, saying that she “prefer[s] not to use the word ‘inevitable’ because in the end it would be a consequence of human decision-making.” To my ear, her insight aligns closely with Atwood’s. If we adopt the rhetoric of “when, not if,” we risk excusing ourselves from real decisions or personal responsibility, and that is dangerous, whatever the attractions or drawbacks of the technology in question.

Cosima’s reply to Coady, of course, is bolder than my questions here: “Frankly, you’re all too insane.” Orphan Black has displayed its bioethical cards many times by now: let’s make all the crazy science we can, and let’s resist corporations that would turn it into eugenic weaponry. Along with its many rewarding moments of defiance, though, the show acknowledges the difficulty of walking that line. Beyond all the OMGs evoked by Donnie whacking Dr. Leekie or Krystal kicking the crap out of her big-cosmetics date, the show gives us women and scientists who are richly nuanced characters and who struggle mightily with their decisions.

Take Susan Duncan, a character who would have been easy to treat as merely another mad scientist. Instead, we witness her 11th-hour realization that attempting to control human evolution requires playing along with a patriarchy that will always have ulterior motives. As she admits to Ira, using a word we have already highlighted this season, “I sacrificed everything for Neolution. People I loved, perhaps even my own soul. But now, Ira, it is time to bring it all down.” Her attempt to murder Westmoreland is one of the season’s most artfully edited sequences. As we watch the victims of his vampiric cult burn down Revival, Susan humors the old man by reciting from Wordsworth’s poem, “Lines Written in Early Spring”:

To her fair works did Nature link
The human soul that through me ran;
If this belief from Heaven be sent,
If such [is] Nature’s holy plan,
And much it grieved my heart to think
What man has made of man.

The effect of this brilliantly selected voiceover is that Wordsworth serves as a lament for Neolution, Revival, and especially Susan’s personal ambitions. Here is a scientist who convinced herself that the end justified the means, that she could make decisions for the sestras and countless others without their consent, but hold onto some thin shred of morality on the view that it was all for the greater good. She thought herself the link between Nature and the human soul, the bridge between the clinical and the humane that Westmoreland mocked in the previous episode. As Susan acknowledges, though, her role hasn’t worked out: it is all too evident “what man has made of man.”

There is an even deeper significance in Susan’s recitation once we compare it to the original poem. It turns out that she splices and recombines Wordsworth with no less hesitation than she does human DNA; the middle couplet in Susan’s version is extracted from the poem’s final stanza and inserted into its second. And as with the Leda clones, her cutting-and-pasting yields unexpected results. In this mashup, the poem questions “this belief” in the link between the soul and Nature’s beauty; Wordsworth seems to say that any attempt to hold together the spiritual and the material leads only to disillusionment. This fits Susan’s experience: Revival is destroying itself and Neolution has been hijacked by its founder’s narcissism.

In Wordsworth’s full poem, though, the phrase “this belief” arrives only in the poem’s last stanza, and instead of referring to a link between the soul and Nature, it emphasizes these categories’ separation. The three stanzas absent from Susan’s quotation describe how “every flower / Enjoys the air it breathes”; they celebrate the “thrill” of birds’ “pleasure”; they return to the “pleasure” that comes as “The budding twigs spread out their fan / To catch the breezy air.” For the Romantic poet, such anthropomorphism testifies to an independent natural glory, one that stands apart from “what man has done to man.”

So, does Orphan Black’s utilization of Wordsworth indicate that humanity and nature are incompatible categories, that any attempt to change one via the other is doomed? I don’t think so. Instead, my interpretation is that the show wants to question the binary in the first place. How, it asks, did we arrive at the assumption that the human and the natural are opposing rather than profoundly interwoven categories? How did we grow convinced that we were so separate from the beasts, the creatures, the monsters?

For now, I will offer just one short, relatively simple answer: we learned to harden ourselves to others’ pain, to dismiss it as insignificant. What Westmoreland and Coady share — what Susan long accepted but finally rejects — is the assumption that since some people will always dominate others, no holds are barred. We should note, however, that their impatience with others’ suffering clearly echoes that of another fictional scientist often referenced by the show. As Doctor Moreau puts it in Wells’s novel, “Pleasure and pain — bah! What is your theologian’s ecstasy but Mahomet’s hour in the dark? This store which men and women set on pleasure and pain, Prendick, is the mark of the beast upon them — the mark of the beast from which they came! Pain, pain and pleasure, they are for us only so long as we wriggle in the dust.”

Like Wordsworth, Orphan Black says otherwise. Those who thrive on exploitation are not worth a drop of their victims’ blood.

What about that is confusing? 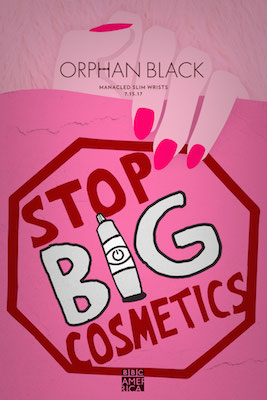